Other parts of this series so far:

The Viking cruise officially ended in Basel, Switzerland on a Thursday. I wasn’t in any hurry to get back just to save a vacation day, so my cruise roomie and I decided to extend the trip through Saturday. We took the train from Basel to Zurich, which is about an hour away.

The Viking concierge arranged a taxi for us and one was waiting for us at their terminal at the appointed time. I don’t recall the price but it was very reasonable. Inside the station we didn’t try to use the automated ticket machines but the man at the ticket window was quite helpful and got us the correct ticket we needed. Fortunately there was a train leaving in about 15-20 minutes so we hopped aboard. I finally pulled out some reading material I’d brought for the trip. It was the first time I’d seen it since I packed it up on the plane! This was a terrific choice for getting to Zurich. The ticket cost 32 Swiss Francs or just over $35 USD.

Zurich’s main train station is very convenient for tourists. The local trams (on-street trains) are super-convenient and the whole area is very walkable. We picked up tram tickets at the tourist information office in the train station and only had to just walk outside to pick up the tram that would take us near our hotel, the Park Hyatt. We didn’t have to wait long and even lugging/rolling our suitcases (one large case apiece) it was easy enough to get them on/off the tram. Our tram stop was about two blocks away from the hotel. It was an easy enough walk with the suitcases though there was some construction in the area. (We have a running joke that we’re going to invest in a scaffolding company in Europe because it seems everywhere we go some building or tourist site is covered up with it!) We walked a couple of blocks and then couldn’t find street numbers though we knew we were close to the hotel. As we chatted about it on the street corner, a local asked what we were looking for and then indicated we were right across the street from it! The signage was so subtle that it was easy to miss during the daytime. At night the sign was lit and easier to see. More on the hotel itself in the next installment.

After getting settled in the hotel we got out and started exploring. We first walked around the immediate area of the hotel, looking for a place to eat. We eventually wandered into an Italian place and both ended up ordering pizza. If we’d only known how big they were we’d have split one! We ended up spending way too much on food – and because we hadn’t checked the tipping rules, we overtipped like crazy too. (At the hotel later we did check the tipping rules and realized our faux pas. That didn’t happen again but I’m sure the pizza guy loved us!) 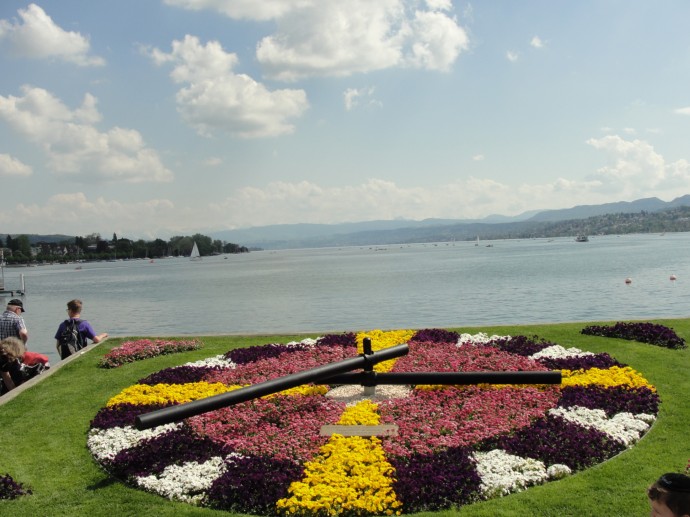 It was a gorgeous day and we ended up near Lake Zurich. We enjoyed just walking through the park there and sat for a bit enjoying the sunshine and the water. There’s a small aviary there and we looked at the various birds housed there. We passed through the souvenir stands and wandered around looking at the architecture and some of the older buildings. After awhile we decided it was nap time and headed back to the hotel. While we never felt we had to rush while on the ship, we were glad to have some extra rest time. 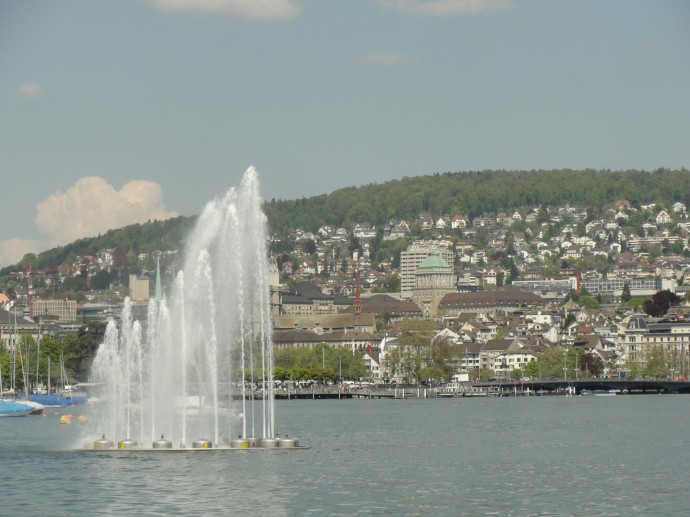 The dancing fountains of Lake Zurich

That evening we wandered out again for dinner. We took the tram down to the train station and then meandered around the city from there. It was a lovely evening and we found a delightful cafe, Cafe Kranzlin. The food was quite good and the dessert…well.

Our one “complaint” (and it wasn’t a serious one) about the food on the river cruise was that there was no chocolate melting cake available. We even talked to Chef Imre and he said that while that dessert was offered on some of the longer cruises, it was not offered on ours. We’d had it before on a Mediterranean cruise and just loved the chocolate cake with the warm melted chocolate center. We’d had it several times during that earlier cruise and were looking forward to it again so we were disappointed when it wasn’t available. But Cafe Kranzlin had it! It was called by a different name but it was just as good. It was so good we had to send a photo back to our friends who had just landed back in the States. They were jealous! 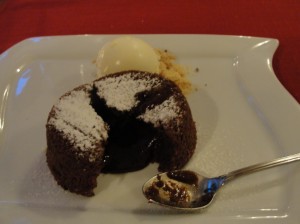 One thing we’d read about, and found to be absolutely true, was that Zurich is a pretty expensive town.  Dinner with dessert, regular water to drink, no alcohol plus tip (a reasonable one this time!) – this came out to over $50 USD.  Just something to keep in mind if you plan on visiting.

But it was the perfect way to top off our first day in Zurich. We headed back to the hotel prepared for a good night’s rest.