The next morning, a Saturday, we awoke in Wuhan, the capital of the Hubei province and the most populous city in Central China with over 10.5M residents in the city itself and over 19M in the metro area. That’s roughly 3200 people per square mile.

Our first stop for the day was the auditorium at the Hubei Provincial Museum where we would be treated to a bell performance. That doesn’t sound all that exciting but was actually pretty cool. I had visions of a number of different hand bells but this was different. These 65 bells were uncovered in the tomb of Marquis Yi who died approximately 430 BC. He was the ruler of Zeng, a minor state in what is now Hubei province.

These are zhong bells which means they are made of bronze and cast in a lens shape (think of two circles slightly intersecting) rather than a circular shape. The mouth of the bells also has a “cutaway” profile and on the outer surface there are 36 studs placed symmetrically on it. This allows these bells to produce two different tones, depending on what part of the bell is struck. The bells uncovered in the Marquis Yi tomb are still playable though the concert was performed on replicas.

There were six musicians, two on zither-like instruments, two on woodwinds and two playing the bells. 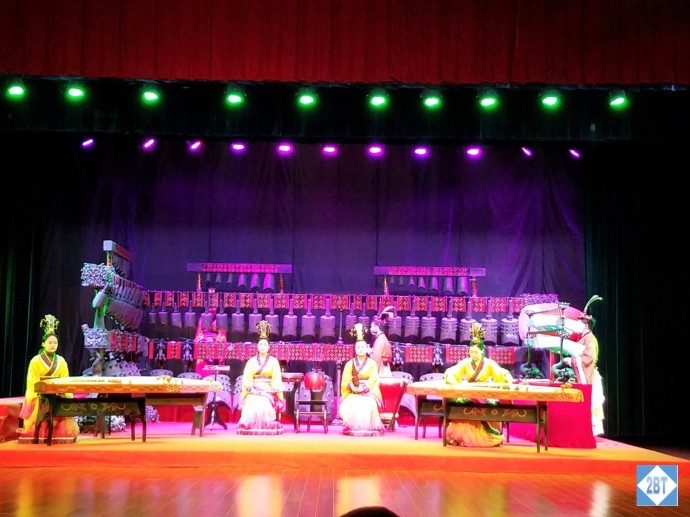 Musicians for the Bells Performance

END_OF_DOCUMENT_TOKEN_TO_BE_REPLACED

Our stop the next day was in Jingzhou (jing – zhō) where we could choose to go visit an elementary school that Viking helps support or we could go visit the ancient city walls. Of our immediate group of 12, 7 went to the school while the other 5 of us went to the city walls.

Today Jingzhou has just under 6M inhabitants but “only” about 1.2 live in what we’d consider the metro area. Due to being situated right on the river the city has been a transportation hub and distribution center for 6000 years.

Our bus took us to the visitor’s center and we began the easy walk toward the city walls. On the way there we stopped to look at this picturesque bridge. 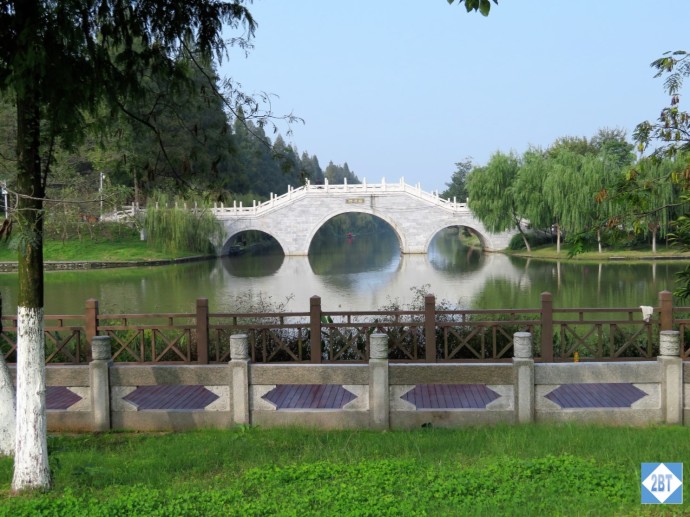 Bridge in a Jingzhou park

END_OF_DOCUMENT_TOKEN_TO_BE_REPLACED

When we awakened the next morning we found that overnight we’d been through a series of locks and were now moored just downstream from the Three Gorges Dam. The dam is the world’s largest power station as far as installed capacity, meaning how many megawatts it can sustainably generate. The dam opened in 2009 but wasn’t fully functional until July 2012. The locks, which are off to the side were completed a bit later.

The government set up an excellent tour program for the dam. Our bus driver took us to the welcome center where we all checked in and then were put on one of the buses specifically for the tour. That dropped us off at the foot of a hill that had a series of escalators to take us to the upper-most viewing area. 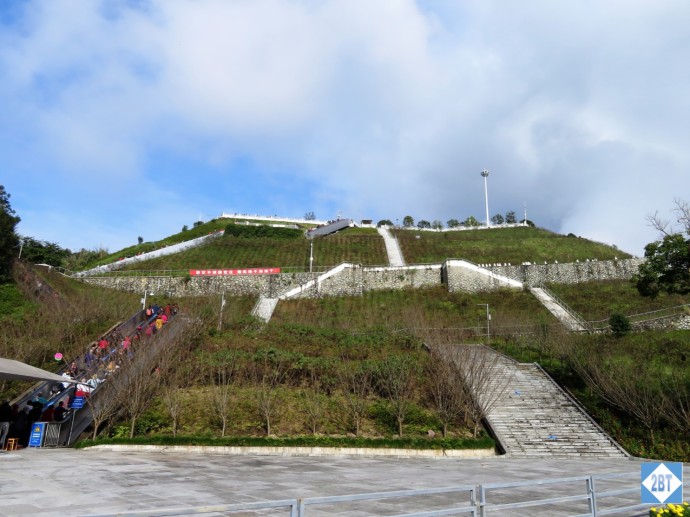 Escalating up to the Observation Plaza

END_OF_DOCUMENT_TOKEN_TO_BE_REPLACED

After leaving Shibozhai, we had the remainder of the day to ourselves aboard the boat. It was terrific to be able to recharge our batteries a bit and there was always interesting scenery outside our balconies.

Our next day was spent sailing through two of the three gorges of the Yangtze. We entered the Qutang Gorge first. It’s the shortest, narrowest and (according to the literature) the most spectacular of the three. 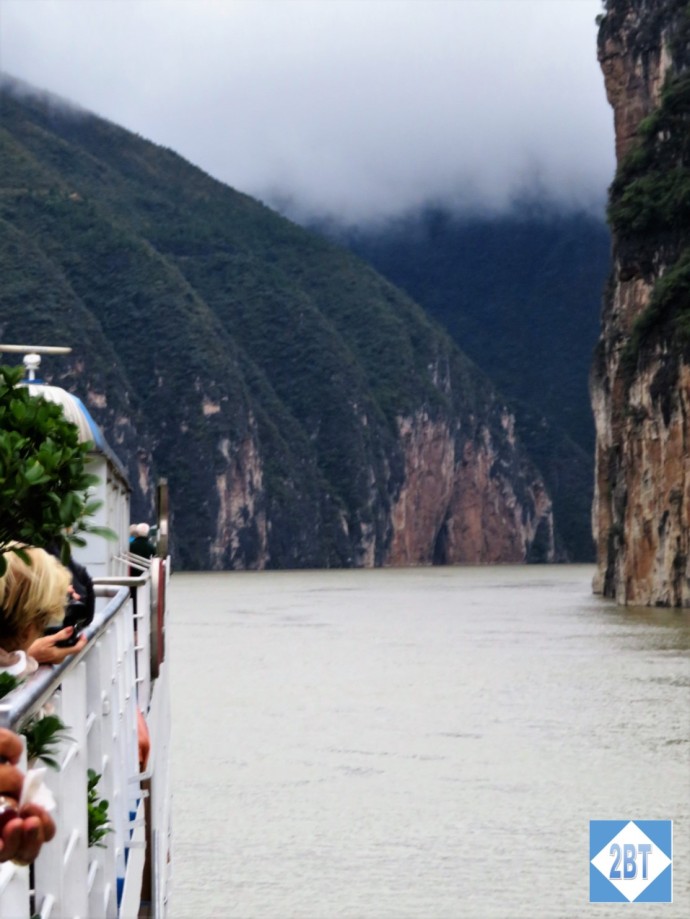 END_OF_DOCUMENT_TOKEN_TO_BE_REPLACED

We awoke the next morning to find ourselves already at our first port of call. The view from our balcony gave us a clue of what we’d be exploring today. 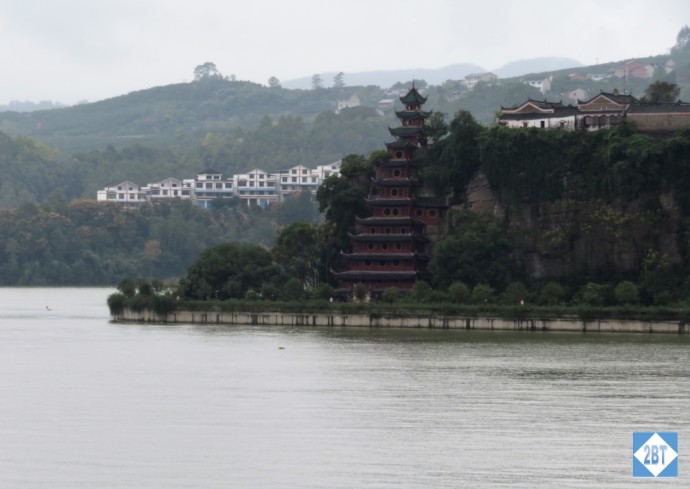 This is Shibaozhai, which means “precious stone fortress”. This multi-story pagoda is built against the side of a stone hill and at the top is a temple. But first, we had to reach the area. END_OF_DOCUMENT_TOKEN_TO_BE_REPLACED

Our previous experience with Viking boats was on the 3-deck boats that cruise the rivers of Europe, like the Rhine and the Danube. The boat that is known as the Viking Emerald is not like that at all. During the cruise we learned that only Chinese-owned boats were allowed to traverse Chinese rivers, so this boat was actually owned by a Chinese company and leased by Viking though it was apparent that Viking had been in charge of the decor as there were lots of similarities to the European river cruise boats. 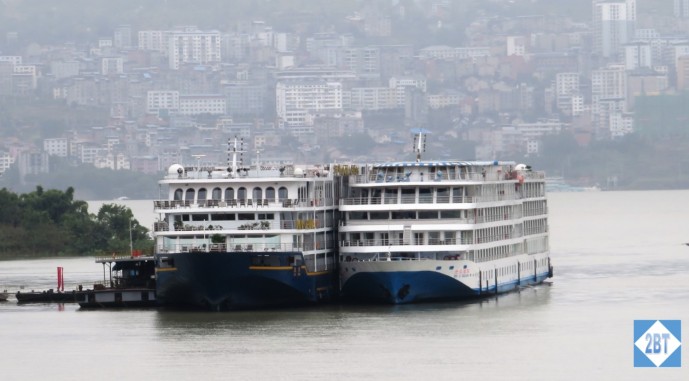 The Emerald (right) at our first port of call

As we had previously experienced, we received a warm welcome once we arrived – perhaps even more than usual because the staff was all aware of the ordeal we’d been through in Lhasa. The boat was already bustling with other passengers who’d done the Imperial Jewels of China tour.  That tour is the same as our Roof of the World tour but without the stop in Tibet.  Though the Emerald is a little larger than the European boats, the lobby made us feel right at home as the layout was very similar.

An elevator is available on Decks 2-5. Once reaching Deck 5 it was quite an impressive view down to the lobby floor. 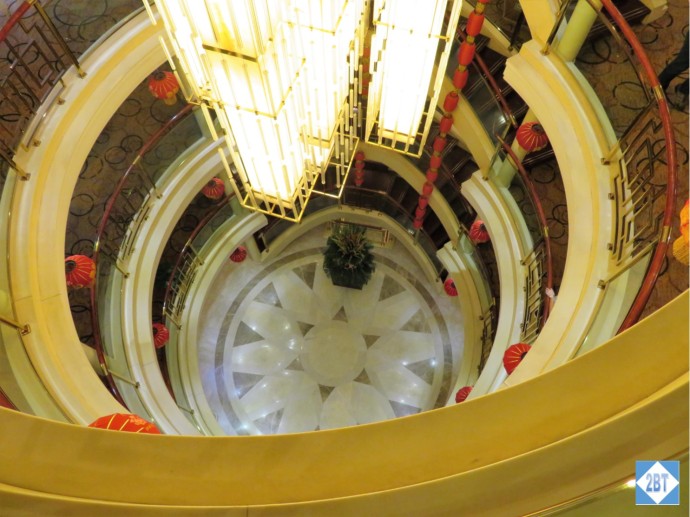 View from Deck 5 down to the lobby

My roommate for this trip wanted to be sure we had a great time so we booked a suite, which at 301 sq. ft. was about 50 sq. ft. larger than the standard cabins. Unlike the European boats, all passenger cabins on the Viking have a balcony, though they’re all quite small. END_OF_DOCUMENT_TOKEN_TO_BE_REPLACED

Leaving Lhasa and Flying to Chongqing

It was another travel day but we had a late morning flight so we could sleep in a little, the weather was gorgeous so everything should be perfect. With an intro like that you know what’s coming, right?

END_OF_DOCUMENT_TOKEN_TO_BE_REPLACED

We had been at altitude for two nights and now it was time for our big test. Could we survive the climb to the Potala Palace, home to Dalai Lamas for centuries? For some of us the answer was no; some did not even go visit the palace at all. Others went and climbed to the main entrance but did not actually go inside the palace walls. For the rest of us we took our time and made it without issue.

The palace is named after Mount Potalaka, the mythical residence of a being that embodies compassion. Construction was begun in 1645 on the orders of the Fifth Dalai Lama. The walls are an average of 3 meters thick – 5 meters thick at the base. The building stands thirteen stories tall and contains over 1000 rooms, 10,000 shrines and 200,000 statues. It was named a UNESCO World Heritage Site in 1994.

We had the chance to take some photos from a favorable spot at street level before starting our journey upwards. 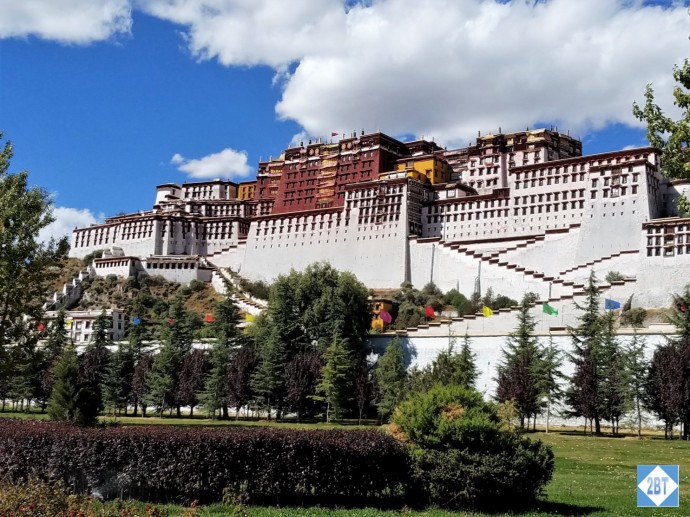 The Potala Palace from street level

END_OF_DOCUMENT_TOKEN_TO_BE_REPLACED

We were originally supposed to visit the Tibetan Museum during our visit but it was closed for renovation, so we made a brief visit to the Canggu Nunnery instead. While Catholic nuns typically cover their heads, Buddhist nuns shave theirs and their habits are very similar to the monks’ garments so when we first saw a nun outside the nunnery some of didn’t realize at first it was a woman we were seeing. 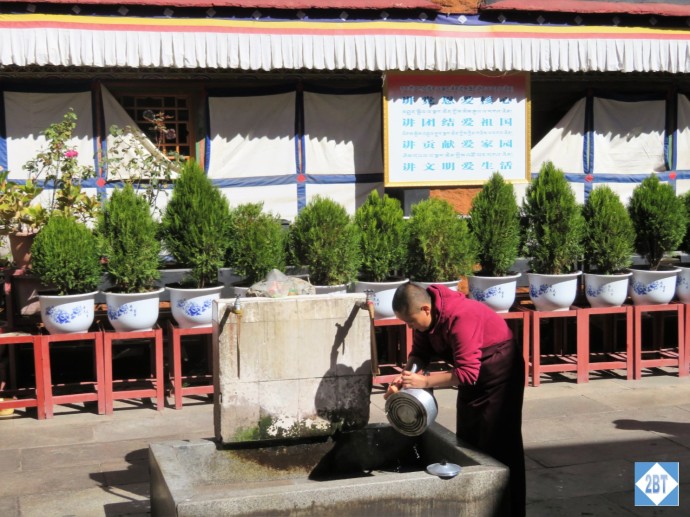 A nun washes a pot outside the nunnery

END_OF_DOCUMENT_TOKEN_TO_BE_REPLACED

Of our two full days of touring Lhasa, the first morning was spent at the Jokhang Temple and the Barkhor Market area that surrounds it.

We were let out on a street corner not far from the pedestrian-only entrance to the market and made our way up to a large plaza. The Jokhang Temple is a Buddhist place of worship and is the spiritual center of Tibet. The oldest portions of the buildings date from the mid-650s. As with most buildings this old it has served a number of purposes over the years, been occupied by different religious and secular groups and has undergone a number of renovations. The most recent renovation wrapped up in the early 1980s.  It was named a UNESCO World Heritage site in 1994.

But well before we got anywhere close to the temple we saw worshipers like these folks who were praying outside the entrance to the plaza. If you’re familiar with the exercises called “burpees”, that is very similar to what these folks were doing: they’d stand up straight, often with their arms over their head, kneel down on both knees and slide their hands forward on the ground until the were completely prone, then slide their hands back toward their knees until they were kneeling and then stand up again. The had either knee pads or something soft to kneel on and pads with straps on the top that they could easily slip their hands in and out of to make the sliding a bit easier. The whole time they did this they were quietly praying. 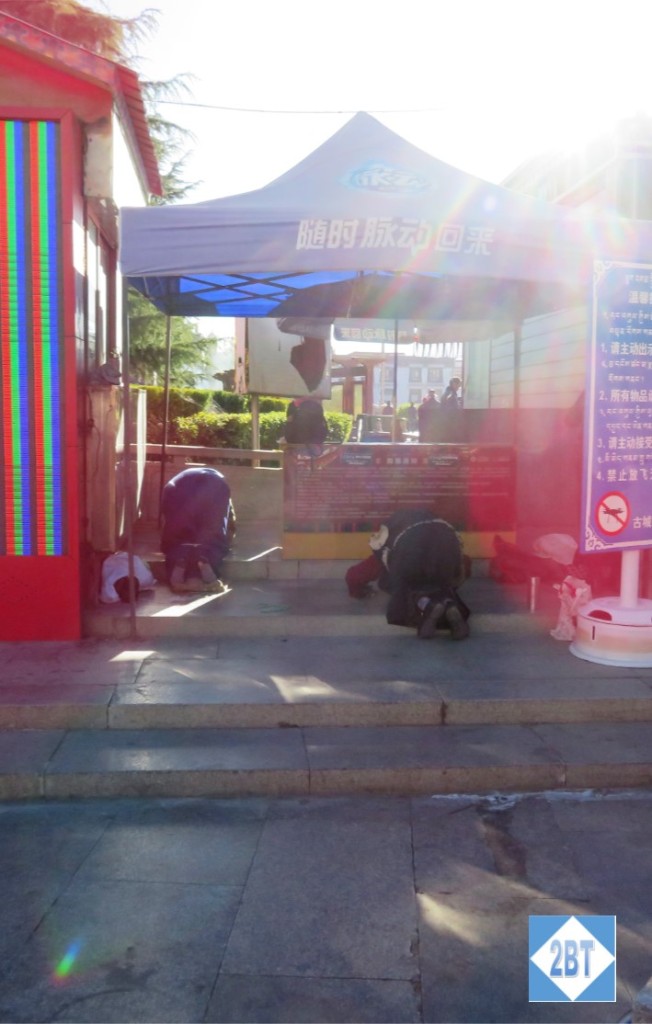 Morning Worshipers just outside the gates of the plaza