Three of us were flying to Beijing on Cathay Pacific from San Francisco via Hong Kong. Two of us bought positioning flights and arrived a day or two early while our third companion was able to get economy award seats all the way from Nashville. By early afternoon our luggage was in storage at our airport hotel and we spent the afternoon enjoying a late lunch and just killing time at the mall until we could go to the airport.

Our flight was due to depart at 12:50 AM and the Cathay counter doesn’t open until 8:30 PM. We’d arrived at the airport a bit before that so had to hang out and wait for the counter to open. After seeing the chaos that was the Economy check-in line, we were so glad to be in premium cabins – one of us in first, the other two in business.

As there are only six first class seats, our companion seated there was through the check-in process quite quickly. It obviously took a bit longer for the two of us in business class but the line still moved quite efficiently. We all received our invitations to the Cathay lounge and were directed to the A gates security line.

While there was a priority line for premium cabin passengers, it didn’t move all that quickly as there were flights by several airlines leaving at the same time and there were language barriers as well, with many non-English speakers moving through. They were having everyone move through the nude-o-scope machines until the line got so backed up that they allowed ten or so of us to go through the regular metal detector. I was thrilled to be in the right place at the right time for that.

We made our way to the Cathay lounge and were granted access. After walking around all day, a couple of us wanted to take showers and that was so refreshing. The shower rooms were clean and plenty big enough that your clothes didn’t get splashed while you were showering. It really made a difference for the long flight ahead.

We had a little bit to eat as it had been about four hours after dinner at that point but we didn’t overindulge because we knew we’d get fed on the plane. About 20 minutes before we were due to board, we started heading toward the gate because we weren’t exactly sure where we were going. As it turned out our gate was at the very end of the concourse and down an escalator so we were glad we’d left ourselves time.

Boarding started just a couple of minutes late and both First Class and Business Class boarded through door 1L, while economy boarded via 2L. We crossed through the galley and left one companion in his First Class seat (and thanks to him for supplying the photos!):

The other two of us continued back through the mini-cabin to the main business class cabin:

Our blankets were waiting for us on our ottomans and we were able to quickly stow our carry-on bags and get settled in our seats. 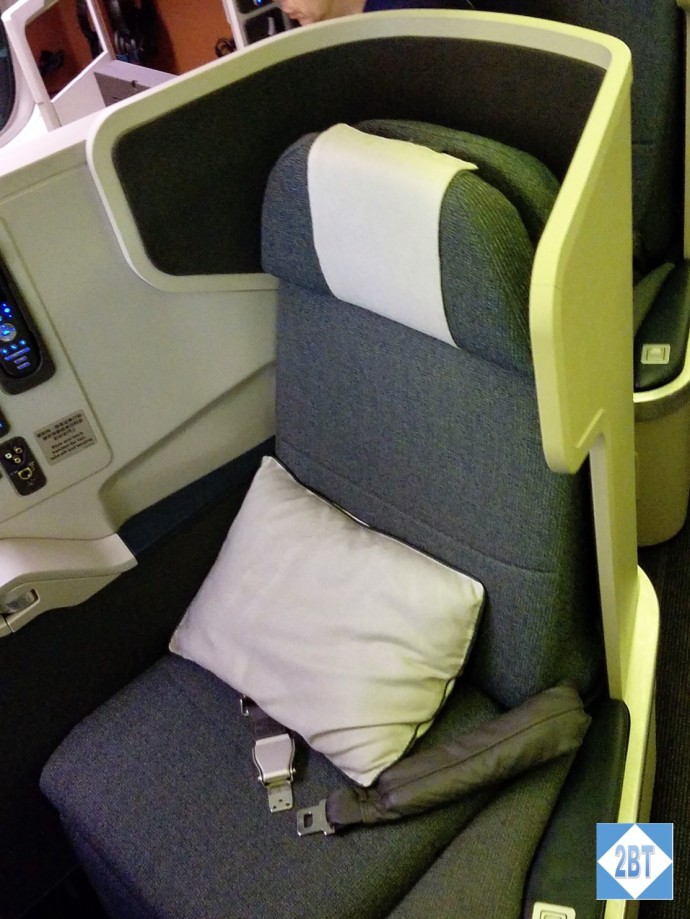 Our seats were angled with our feet pointed toward the windows. To the right was a small storage compartment with the headset. This was a terrific place to store my glasses without worrying about knocking them around in my sleep. I also liked that the door of the compartment had a small mirror. Embedded in the outside of the wall of the compartment was the IFE controller, the seat controls and a light, as well as an electrical outlet. 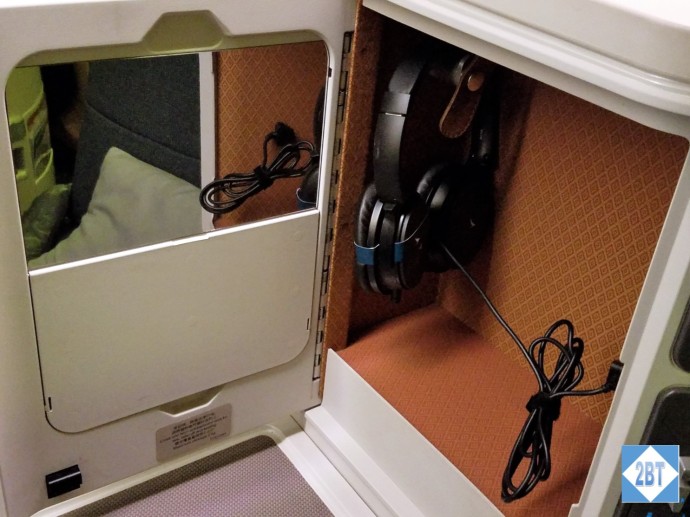 Under the right armrest was another compartment, which was a nice place to put shoes.

After takeoff we received our amenity kits which contained the usual items. Slippers and pajamas were not available for business class customers. 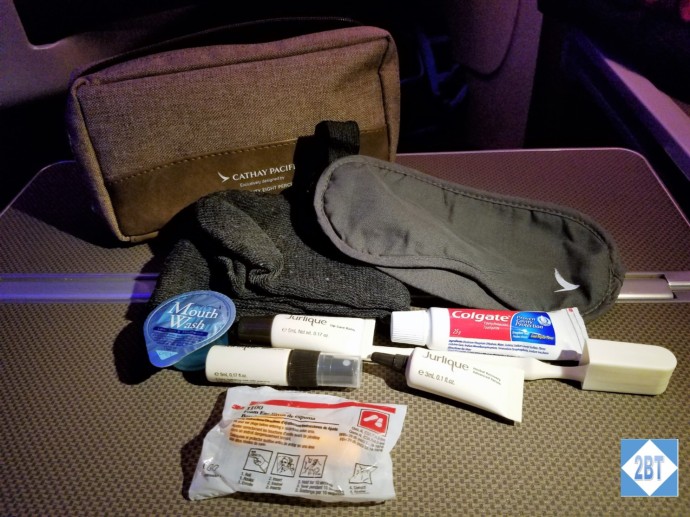 Shortly thereafter, supper was served. The menu was as follows: 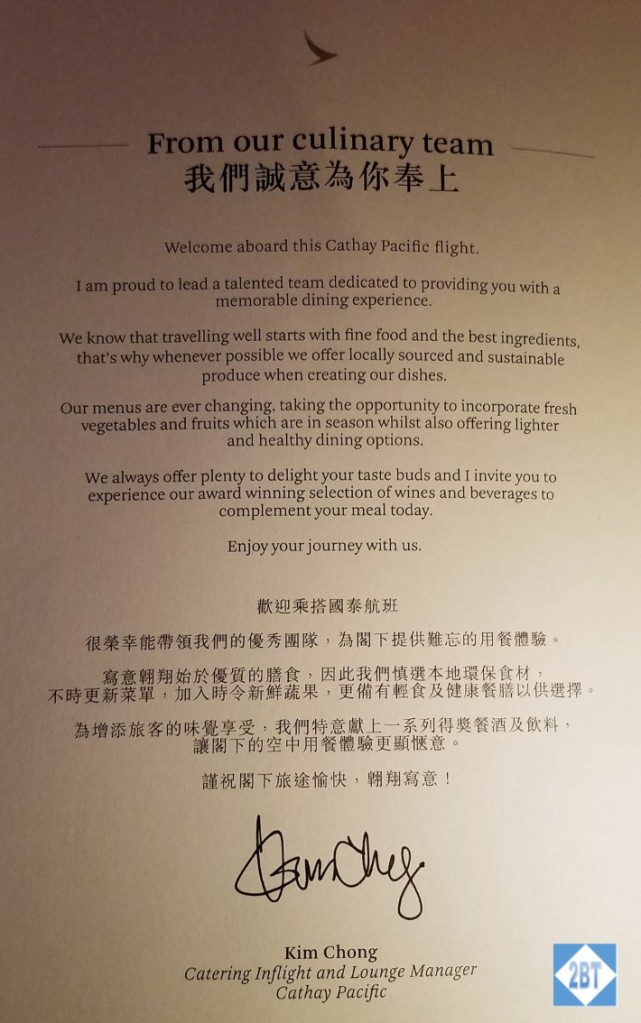 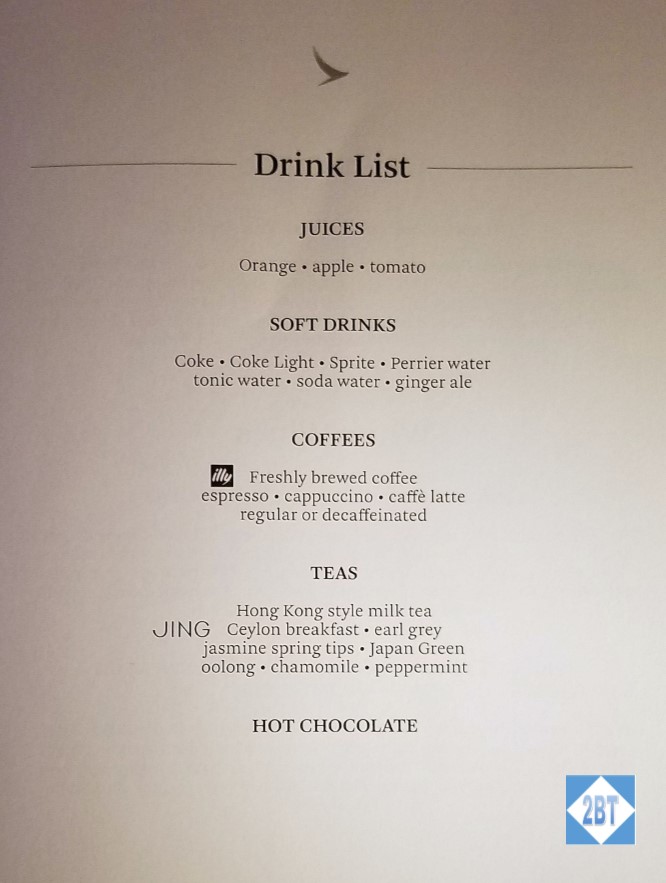 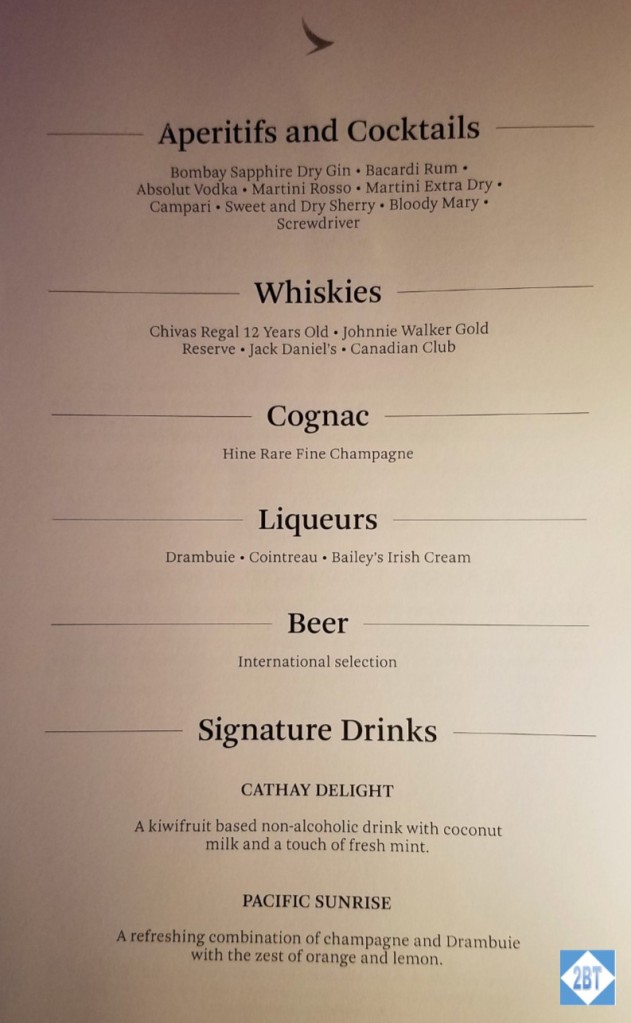 The meal began with a small salad, some berries and bread.

For the main course I had the prawns in wine sauce with rice and pak choy. It was quite good.

I wrapped up the meal with a cup of tea.

Then it was time to get some sleep.

When it was time for breakfast, I wasn’t particularly hungry so just had some fruit and a croissant. 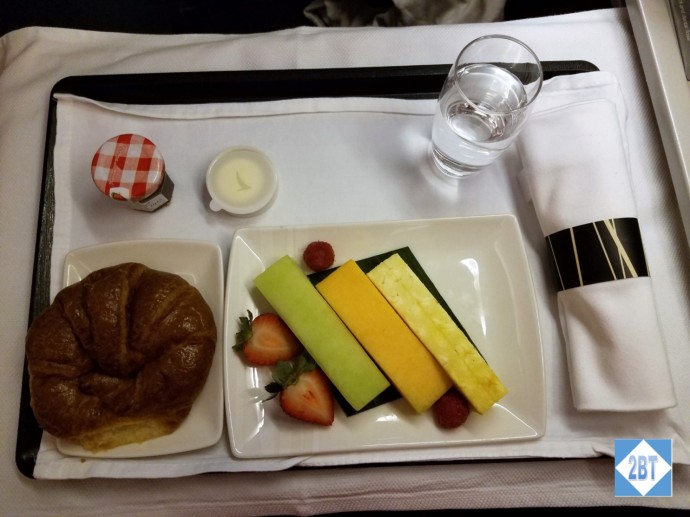 My friend in First Class took a couple of photos of their dine-on-demand menu: 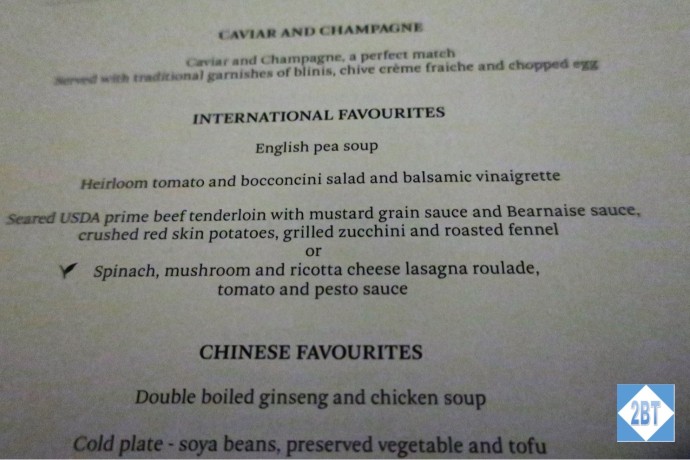 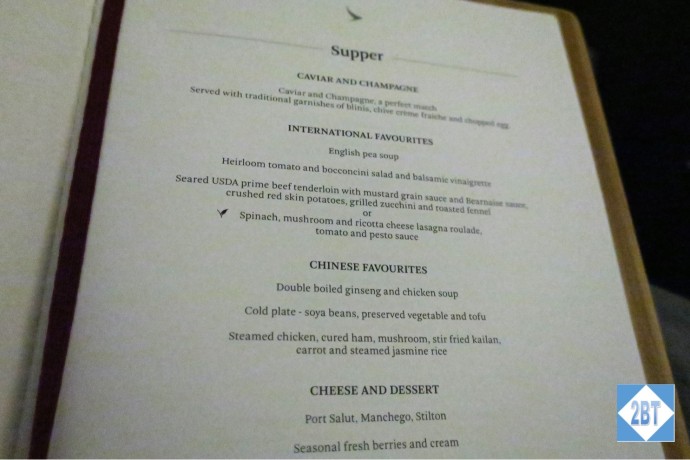 We touched down just a little bit early in Hong Kong.

Service was attentive and the restrooms were kept clean. My only complaint was with the IFE. While the selection was very good, every time I started a new movie or show I had to sit through several minutes of commercials. I’m flying you, Cathay, I don’t need to see commercials about you! I was able to watch a movie with no issues while eating dinner but when I started my second movie it seemed the IFE went a little crazy and they were constantly rebooting different sections of the plane. And each time it lost my place in the movie and I had to sit through the commercials again. I found it quite annoying. But that’s outside the control of the crew and they handled it the best they could.

All in all it was a solid flight and I’d be more than happy to fly Cathay again.