Our flight landed mid-afternoon in Melbourne and while we’d expected it to be cooler than Uluru, it was a good bit cooler than Sydney too. Not cold, but long sleeves and a light jacket felt good in the evenings with the wind.

We took the Sunbus Melbourne from the airport to the Park Hyatt. Their representative showed up near baggage claim very shortly after we got our bags, which was great timing. We then had to traipse over to the international terminal to find the remaining passengers for our van and then we all played “follow the leader” out to our shuttle.

Naturally we were one of the last groups to be let off at our hotel but we were warmly greeted by the bellman at the Park Hyatt Melbourne. He took our big bags as we went inside to check in. The front desk is located to the right of the main entrance and is staffed by delightful, helpful folks. They confirmed our club room and that we would have breakfast included and gave us our keys. 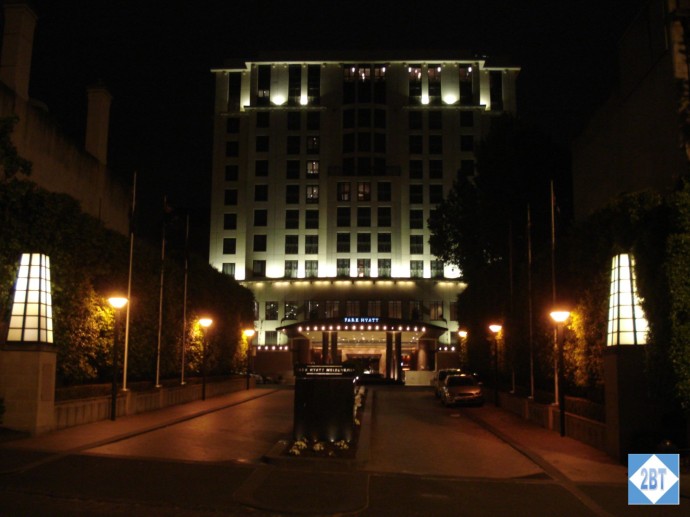 Park Hyatt Melbourne From The Street

END_OF_DOCUMENT_TOKEN_TO_BE_REPLACED

When planning this trip I wanted to include Sydney as a stop since one of my travel companions had never been and I was happy to go back as I really enjoy it. But I also wanted to include places I hadn’t been. One of the great icons of Australia is its Red Centre and the large rock formation known as Uluru. Until I started researching the area I wasn’t aware there’s another formation nearby known as Kata Tjuta. In case you need a pronunciation guide, Uluru is pronounced OO-loo-roo and Kata Tjuta is KHAT-ah JU-tah

We arrived in the middle of a Tuesday afternoon during the third week of October and it was HOT. I cannot even imagine how it feels in the middle of the summer. My advice: stick to visiting in mid-April to mid-October (Autumn through Spring) and skip the summer months.

The park is about a 10-minute ride from the Ayers Rock Resort and entry is at a single ranger station. Each person in the vehicle must have a park pass so if you get behind several cars where people do not have passes, the line can back up. Park passes start at $25 AUD for a 3-day pass which should be all you need. If by chance you’ll make more than one trip to Uluru during a year’s time, opt for the annual pass at $32.50 AUD.

Uluru itself is about a 10-15 minute drive from the park entrance. As we were driving towards it we could occasionally catch glimpses of it in the distance and then we came around a bend and there it was. Pictures really don’t do it justice and I wanted to pull the car over right there and then and start taking photos. Apparently a lot of other people had the same idea because there were “No Stopping” signs all over the place! Well, at least I was in good company with my idea. 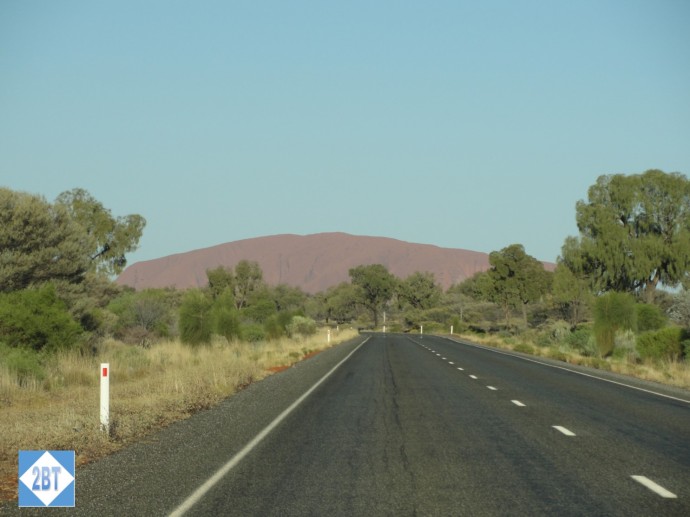 END_OF_DOCUMENT_TOKEN_TO_BE_REPLACED

We arrived at the tiny Ayers Rock (AYQ) airport on time and were happy to get inside the terminal to wait in air conditioned comfort for our bags. There is only one terminal at AYQ with two gates (if I recall correctly) and one belt in baggage claim. No way to get lost here! We picked up our rental car and began the drive to the resort. It was my first effort at driving on the “wrong” side of the road and I was very happy that we were out in the middle of nowhere so I’d have plenty of notice of approaching vehicles and since we had a small SUV, we could even pull off the road entirely if needed. Fortunately I managed to keep it on the road in the correct lane for our time there.

When booking lodging in the Uluru area, there’s one company that handles all requests. The Ayers Rock Resort has lots of different types of lodging from the rustic Outback Pioneer Hotel to the luxurious Sails in the Desert. Since we were paying for this stay (albeit with a discount thanks to Barclays ArrivalPlus points) we chose the Emu Walk Apartments, which is a step or two down, luxury-wise, from the Sails in the Desert but definitely above the Outback Pioneer Lodge. We chose a two-bedroom unit which would give us room to spread out as well as a breakfast area. The second bedroom was supposed to have twin beds though in the end it did not. Fortunately the sofa was relatively comfortable as a third bed since we were only staying two nights.

Our travel dates were during the third week of October, so well into Springtime. Temperatures were very warm during our stay, in the mid-90sF/mid-30sC and our air conditioner managed to keep pace, though it ran very steadily during the day. At night the desert cools off quite a bit which helps keep things cool enough to sleep. 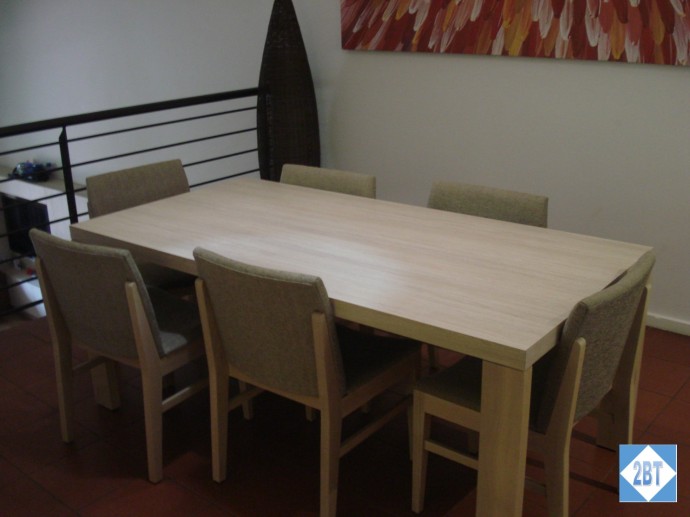 END_OF_DOCUMENT_TOKEN_TO_BE_REPLACED

Our next stop was Uluru, the giant red rock practically in the center of the continent. I think many of us, myself included, forget how large the continent of Australia is and misjudge the distance between cities. For comparison purposes, the distance between Sydney and the Ayers Rock airports is almost exactly the same distance as between Washington Dulles and Amarillo, Texas – just over 1360 miles!

When doing our original trip planning, I was hoping to leave the US on a Friday or Saturday to minimize the amount of vacation time we’d take off but the availability of the DFW-SYD flight mid-week changed that plan. Now I’m glad it worked out that way because if we’d left the US on the weekend, we’d be flying to Uluru the following weekend and as I found out, Qantas doesn’t seem to release many (any?) award seats to Uluru on the weekends. We’d have been fine flying in economy but booking 11 months in advance the only award seats we found were in business class (equivalent to US domestic first class). Not only that but I only found two seats from Sydney and two from Melbourne. Fortunately there were plenty of SYD-MEL seats available. So my friends got to sleep in a bit while I got up for an early morning trip to Melbourne. We all met in Alice Springs at its cute little airport and took the last leg together.

I did stop in the Qantas lounges in Sydney and Melbourne and had a bite to eat. They were quite busy so I didn’t take any photos. But both offered hot and cold foods and had quite a large selection.

Since we were in business class we also had food on the plane so I didn’t have to worry about going hungry at all. 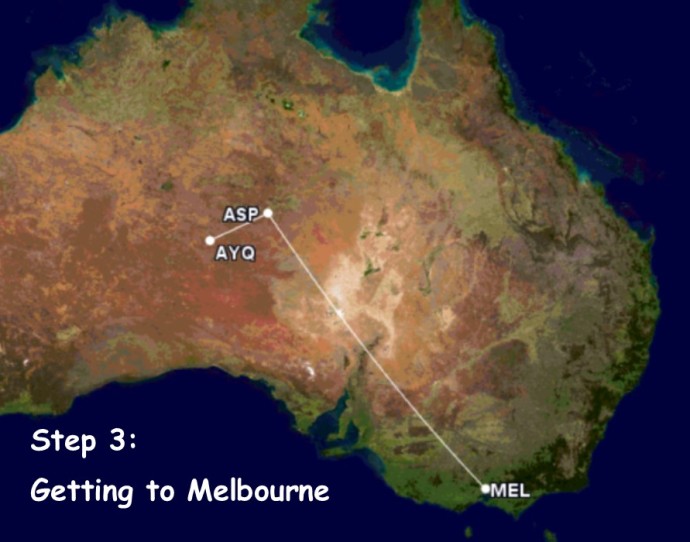 On our flight back to Melbourne, there were only two business class seats available so one of my friends bit the bullet and paid cash for a ticket. Fortunately it wasn’t too expensive and for a relatively short flight she said it was fine.

So that’s how we got around the country. Next up, our visit to the Red Centre!

Our flights from the US landed very early in the morning so it was still early in the day by the time we got settled in our hotel. In an effort to stay awake, we decided that walking would be a good idea. We walked around The Rocks, the area near the hotel, and noticed lots of little restaurants. There were also tents being set up for a weekend fair with lots of booths of food and crafts.

After browsing around there a bit we decided to walk to Darling Harbour. It’s quite a hike but we enjoyed being out in the warm weather. One thing that’s always fun about being in a different country is how proper names that are not unusual for the area sound so very different to my ears. On our walk we passed the Barangaroo Reserve, a small park with stone steps around the edge of an inlet. I enjoyed just letting the sound of that roll through my head “Barangaroo”. It’s a fun word!  This would be a nice place to have a sack lunch or sit and read a book. We’d veered from the road to walk through the reserve, hoping its path would take us along the water but we got to the end of the park only to discover a barrier as construction was underway on several towers, so we had to re-trace our steps back to the road. 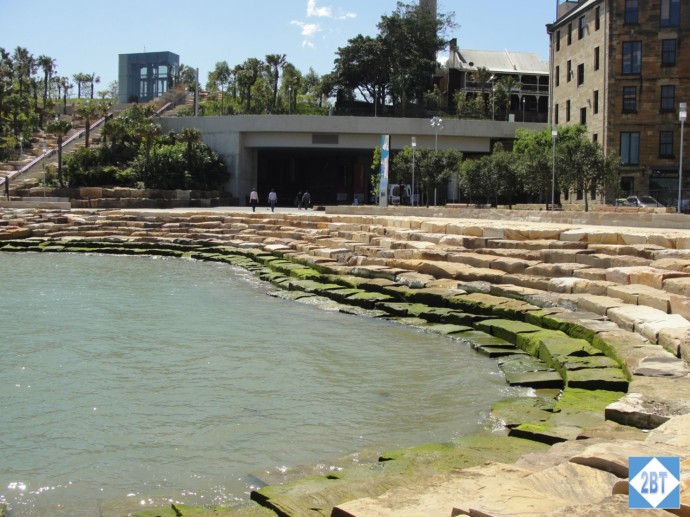 The amphitheater at Barangaroo Reserve

END_OF_DOCUMENT_TOKEN_TO_BE_REPLACED

A few days before we left on our trip I happened to notice a tweet that the Sunday we’d be in Sydney was the one day of the year that the famed Opera House held its (free) open house. On my previous visit to Sydney I’d paid to take a tour and hoped to convince my friends that it was worth it but this was even better, even if we did have to line up early on a Sunday morning. 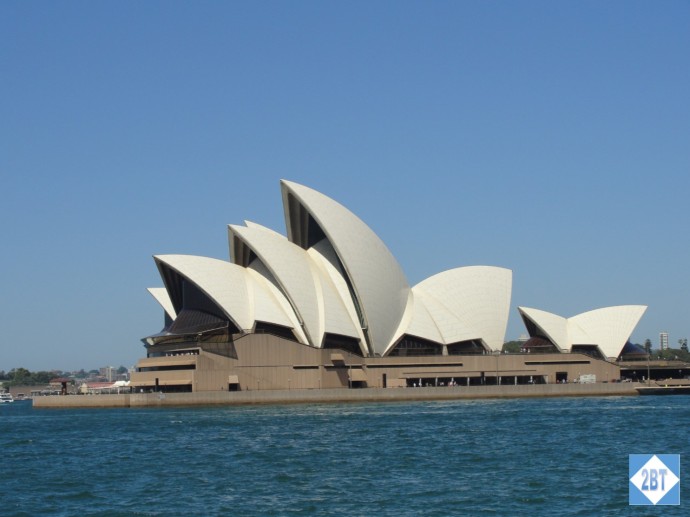 In the 1950s when Sydney decided an iconic building was needed, a world-wide competition was held. The winner was Jørn Utzon from Denmark. Construction began in 1959 with the podium being finished in 1963, the outer shells in 1967 and the interior work was completed in 1973 – only 10 years overdue and 1457% over budget! Due to conflicts with government officials, Utzon resigned from the project in the mid-1960s and his name was not even mentioned in the building’s grand opening ceremony. However he and his son were asked to help with some remodeling efforts that opened in 2004, completing the reconciliation process between the two parties. END_OF_DOCUMENT_TOKEN_TO_BE_REPLACED