Our flights from the US landed very early in the morning so it was still early in the day by the time we got settled in our hotel. In an effort to stay awake, we decided that walking would be a good idea. We walked around The Rocks, the area near the hotel, and noticed lots of little restaurants. There were also tents being set up for a weekend fair with lots of booths of food and crafts.

After browsing around there a bit we decided to walk to Darling Harbour. It’s quite a hike but we enjoyed being out in the warm weather. One thing that’s always fun about being in a different country is how proper names that are not unusual for the area sound so very different to my ears. On our walk we passed the Barangaroo Reserve, a small park with stone steps around the edge of an inlet. I enjoyed just letting the sound of that roll through my head “Barangaroo”. It’s a fun word!  This would be a nice place to have a sack lunch or sit and read a book. We’d veered from the road to walk through the reserve, hoping its path would take us along the water but we got to the end of the park only to discover a barrier as construction was underway on several towers, so we had to re-trace our steps back to the road.

The amphitheater at Barangaroo Reserve

We finally made it to Darling Harbour and decided to have lunch at one of the many al fresco restaurants facing the water.

After lunch we meandered through the area, eventually winding up at the Chinese Garden of Friendship. It’s a quiet, shaded place in the midst of all the touristy attractions. We decided not to go in and just enjoyed the peacefulness outside its entrance for a little while and give our feet a rest at the same time.

Dragon guarding the entrance to the Chinese Garden 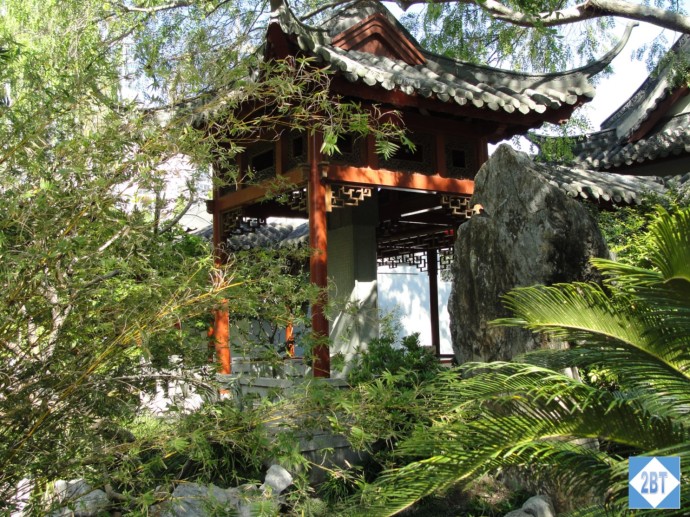 Pagoda at the Chinese Garden

Before walking back we decided no vacation was complete without gelato, so we made sure to check that off our list. On the way back we decided we must have walked at least 50 miles that day 🙂  It was nice to get back to the hotel for a quick nap.  Dinner was up the hill in the Miller’s Point area with a stop afterwards at the Lord Nelson Brewery Hotel, Sydney’s oldest continually licensed hotel and home of Australia’s oldest pub brewery.

We didn’t eat at the Park Hyatt where we were staying because, frankly, it was too expensive.  Guess that’s the price you pay for staying in hotels on points where you’d never be able to pay to stay!  If we’d had Hyatt Diamond status then breakfast would have been included but we only had the Platinum status that comes with their co-branded credit card.  So each morning we found a breakfast place in the Rocks area and tried out the local cuisine.

On Saturday morning we felt adventurous and hopped on the local bus for Bondi Beach.  This was the site of the Beach Volleyball competition during the 2000 Sydney Olympics.  Though the temporary stadium is long gone, you can see why this beach was chosen as it’s picturesque and everything you’d expect a public beach to be.

It’s Saturday, time to hit the beach at Bondi!

That evening we did the BridgeClimb Sydney.  This was my second opportunity though the first time at night.  Since it was spring I thought it might be cool up so high after the sun went down but the humidity was high enough that I was quite warm – even hot – the whole time.  You’re not allowed to take any personal items on the climb due to the danger of dropping things on the cars below.  The bridge climb company provides jumpsuits to fit over your own clothes and even provided hats are clipped to the jumpsuits.  Eyeglasses and sunglasses must be secured via a lanyard as well.  As you might imagine since I’ve now done this twice, I highly recommend this activity.  In the winter I’d go in the daytime but most of the year I’d recommend an evening climb just because it will get very hot during the day.  Here’s a group on the way up the bridge.  Once they reach the flag they’ll cross over the middle and come down on the far side.

See the people up on top of the bridge?

Sunday morning was the Opera House tour. We were glad we got up and in line relatively early because by the time we were finished, the wait to enter was probably at least 1.5 hours!

Having seen one famous beach, we decided to visit the other one: Manly Beach.  That meant hopping the ferry in Circular Quay, which was between our hotel and the Opera House – in other words, practically next to the hotel.

The ferry docks at Manly Wharf and the whole area between the wharf and the beach is a very pedestrian-friendly shopping area.  We stopped for lunch and then enjoyed just strolling around and soaking it all in.  It wasn’t as sunny as it had been the day before but did clear up eventually.  Though we didn’t get in the water there were quite a few folks who did.  Mostly people seemed to just enjoy being in the warm weather and watching the waves. 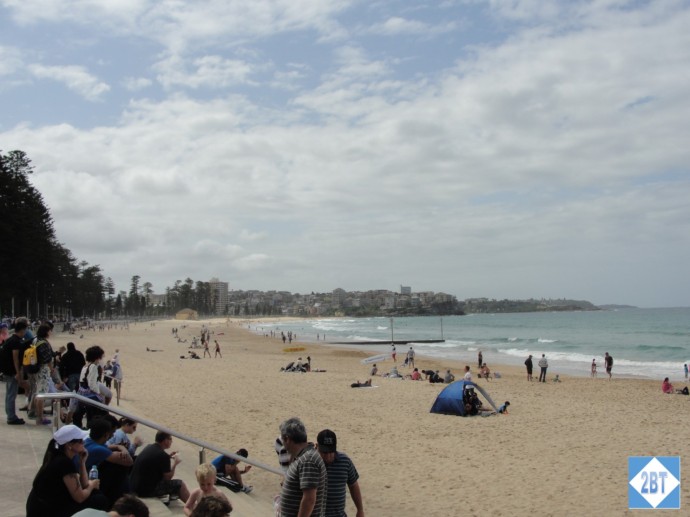 Soaking in the sun at Manly Beach

Our final day we spent at the Royal Botanic Garden, which is located right next to the Opera House. The Garden celebrated its 200th anniversary in 2014 and has left this garden sculpture (is that what you call it?) in place so we don’t forget that! 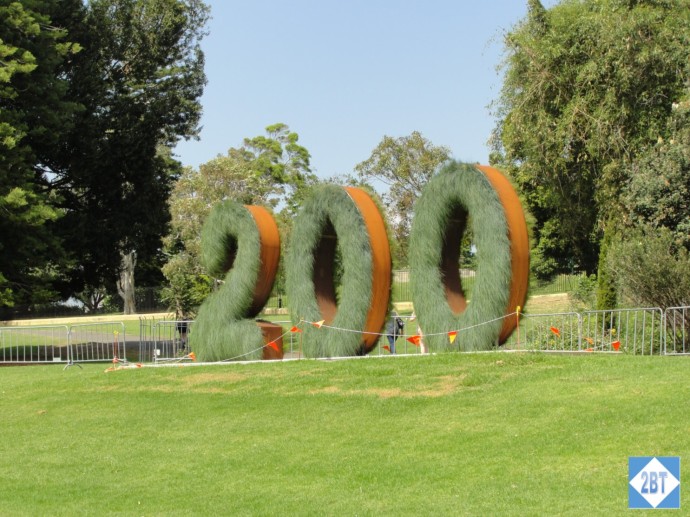 I believe these are camellias 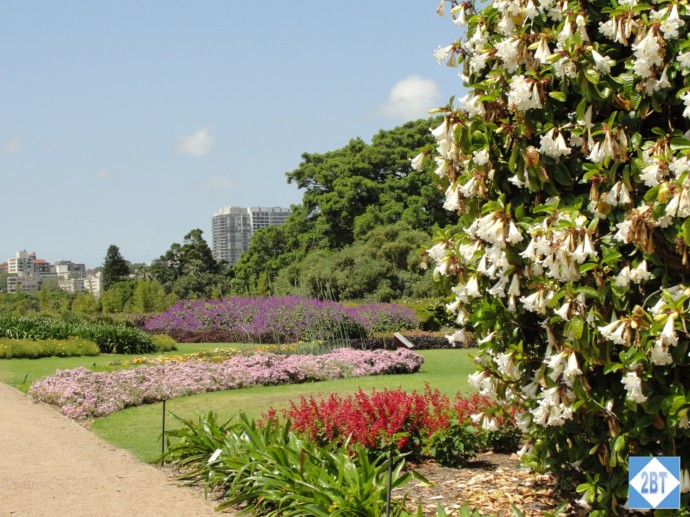 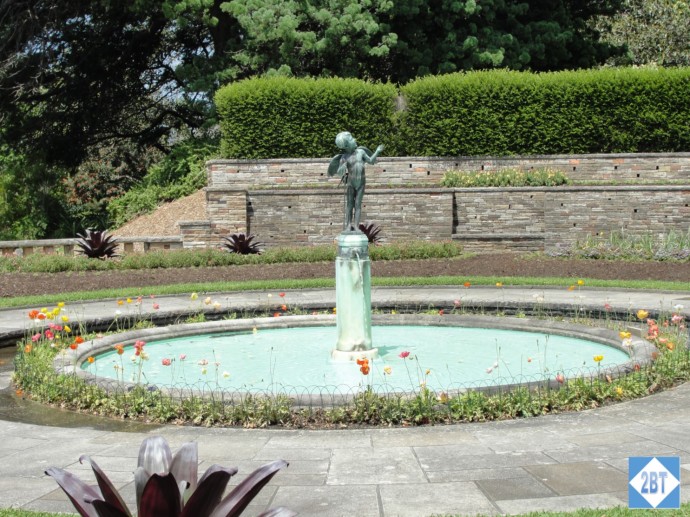 A fountain ringed by colorful flowers

A sculpture called Wurrungwuri, which means “This side – this side of the water”.

And, of course, the obligatory Ibis! 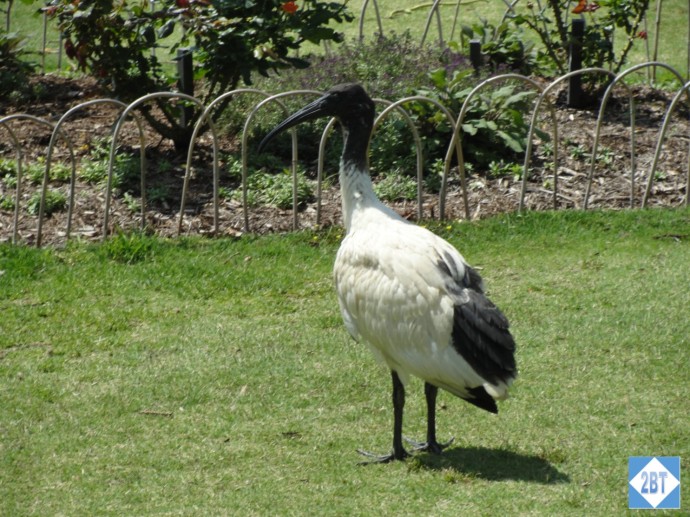 An Ibis at the Botanic Garden

After dinner we celebrated our time in Sydney with gelato at a local chocolate café and got packed up for our flights to the desert the next day.