When it comes to paying real money for things, I can be, er, frugal. So I like to use points to pay for things that I’d never pay cash for otherwise – or at least, not as much cash as the asking price! A standard Harbour View Twin room at the Park Hyatt retails for over $800 USD per night for dates in mid-October. No way would I ever pay that for any hotel but I will gladly fork over points and free night certificates for such a room.

Welcome to the Park Hyatt

Two of us arrived early on a Friday morning after taking a shared shuttle from the airport. Early morning international arrivals are not uncommon at the Sydney airport and I had alerted the Park Hyatt staff to the fact that we’d be there well before the normal check-in time, in hopes that they could accommodate us. Fortunately, they were able to do so.

The front doors of the property are on either side of the front desk, so it’s a very short walk. We were greeted promptly and while the bellman took our large suitcases, we were immediately helped at the front desk. The check in process did not take long at all and then the staff member escorted us to our room, where she demonstrated its features. A short time later the bellman brought our luggage to us. Everyone we dealt with at the hotel was so helpful and nice. They all seemed to really enjoy what they were doing and they did a terrific job.

The hotel is located in the shadow of the Harbour Bridge. In fact, while doing the Sydney Bridge Climb, we passed very close to the top and could see the pool on the roof. I’m not sure I’ve ever seen that type of view of a hotel where I was staying!

While I’d hoped to have a view of the Opera House from the room, I learned that those rooms have a max occupancy of two people, so we would not be able to have one. Disappointing but I was glad to know that before I arrived instead of building up my hopes only to have them shot down later. Our Harbour Twin room was quite large, so that even after the furniture was shuffled a bit to accomodate the rollaway bed, it did not feel crowded.

There were several plugs accessible near each of the beds, which was fantastic as we all had at least two electronic devices to plug in each day.

Across from the beds was a long, low chest with a bit of storage space and the TV sat on top of that. The desk sat at the far end, near the windows, facing the TV. Between the beds and the window was a small seating area with what appeared to be a sectional love seat that had been split apart and a coffee table/ottoman. It was a little close quarters here because of the extra bed in the room but we didn’t spend a lot of time sitting around anyway.

TV and cabinet opposite the beds. Mirrored mini-bar closet to the right. 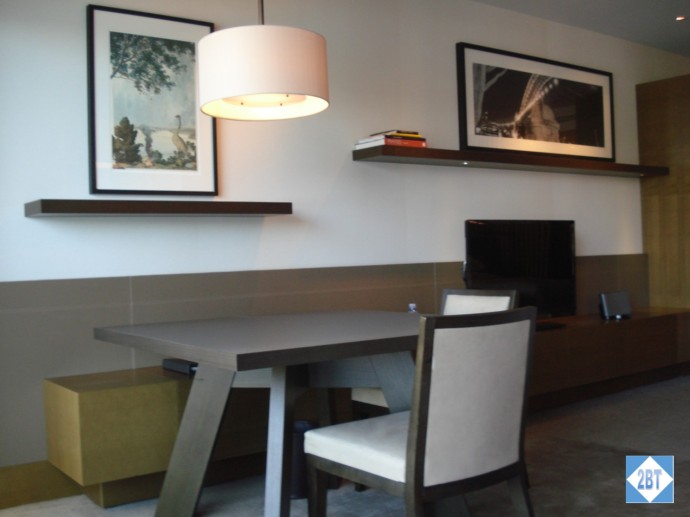 Desk to the left of the TV, next to the window

Seating area – a little compressed to make way for the 3rd bed.

Out on the balcony we could lean out a bit and have a pretty good view of the Opera House. That made for a good show one night when there were fireworks above it! 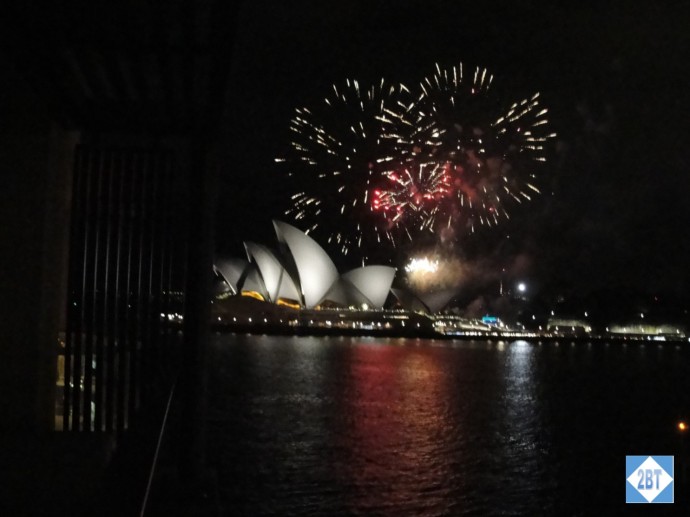 View of the fireworks from the balcony

Back inside, the bathroom was huge, though we felt like one change could have made it even more useful. Firstly, we loved the large counter and dual sinks. With three women in the room, there’s often not enough space for all our “stuff” but we had plenty of room here. There were lots of towels and robes were provided as well. We loved how huge the bath towels were! The door to the bathroom was a sliding one, which was nice as it was opposite the wardrobe, so those door didn’t interfere with each other. There was also a sliding panel into the room, which made both rooms feel larger when it was open. You can see the panel in the open position on the photo with the beds.

Large double vanity – we loved it!

The room with the toilet was as you’d expect – though we got amused with the heated toilet seat. It certainly wasn’t cold enough to need that at that time of year, but yet staff kept turning it back on as our room was serviced the first couple of days before they finally left it turned off. 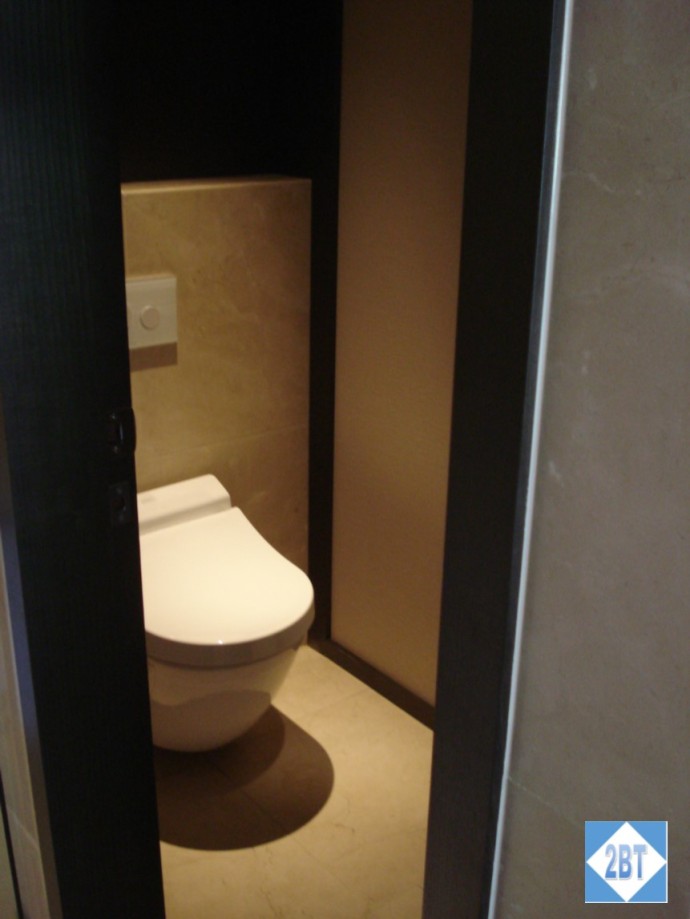 Room with the heated toilet seat

The place where we’d make a change is in the room where the shower and tub are. The tub is quite large and the rainfall shower is next to it. Both are behind a glass door and wall with a mirror on the back wall. This makes the area seem even larger, which is nice…but not practical for friends staying in a room together. This setup meant that when one person was taking a shower, the entire bathroom was off-limits for the other people. If the shower door and wall had just been made of frosted/opaque glass, then others could have made use of the sinks or toilet if needed. As we were rarely on a schedule it wasn’t a huge problem for us but something that could have been done better. All in all a very small complaint. 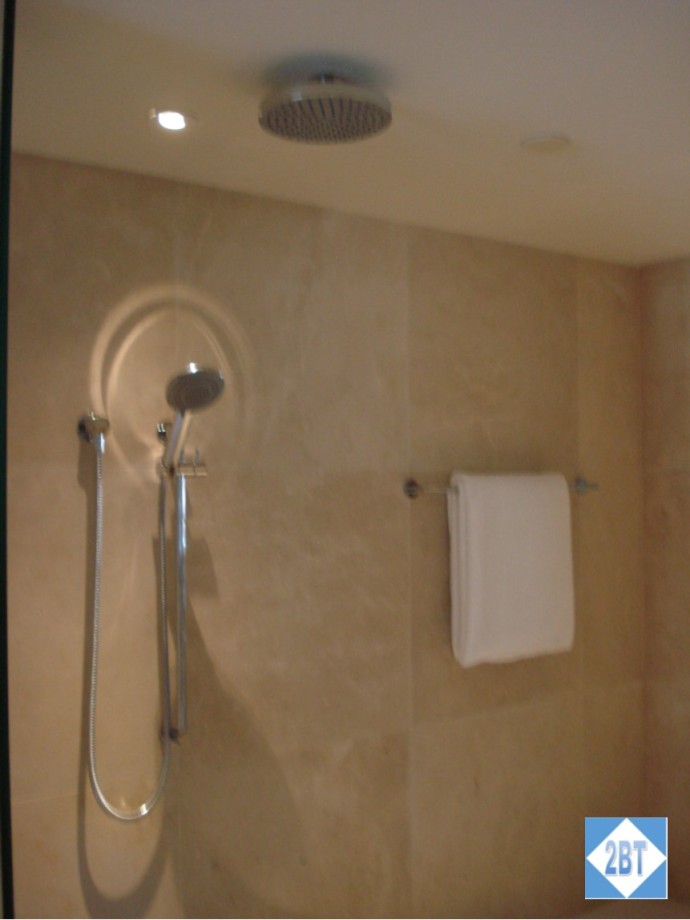 The shower is beside the tub and has both the rainfall showerhead and a hand-held nozzle. 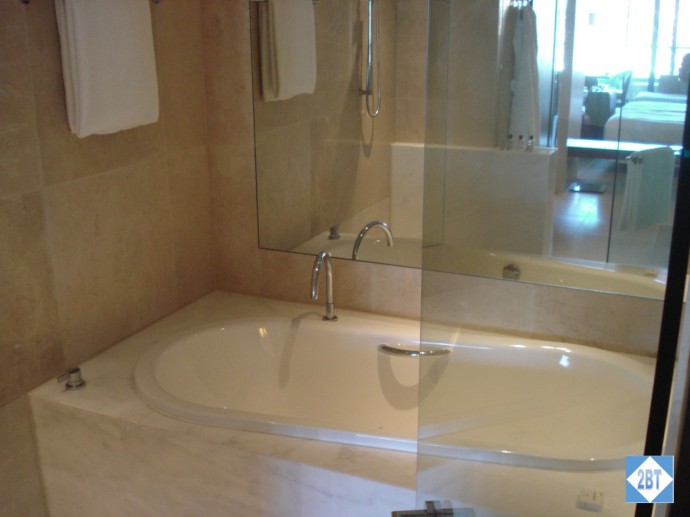 The toiletries were Bergamote 22, the standard for Park Hyatt.

The hotel also had a gym and I was suprised at how many machines they had. I probably should have tried it out personally, but I did not. From the gym it was a short walk up to the rooftop pool. Here I was surprised at how small the pool was but I’d guess that when you’re staying at this hotel, the pool is NOT your primary reason for doing so! No photos as there were several people using it on my one visit there. Do be aware that if someone is staying in the penthouse, that comes with exclusive use of the pool so it would be unavailable to other guests. 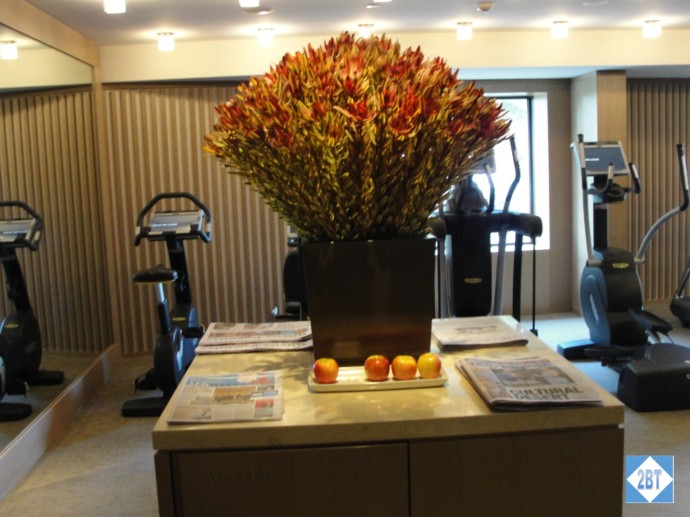 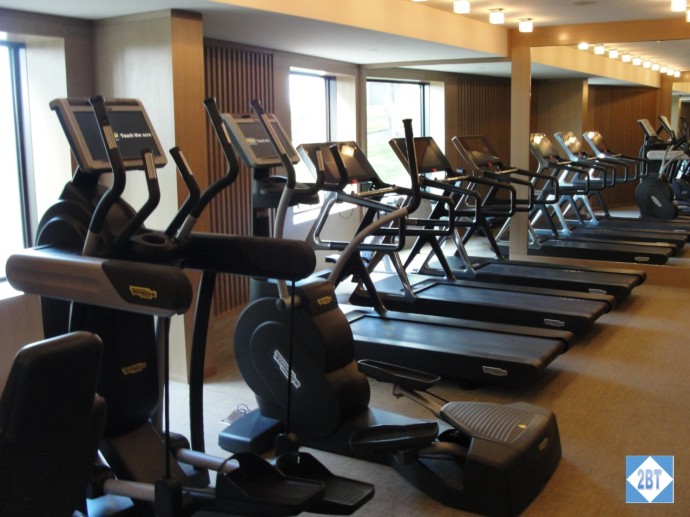 We were due to leave on a Tuesday so on Sunday I got the concierge to check on our return shuttle rides. Good thing I did because Sunbus Sydney had no reservation for us, even though we had confirmation numbers from Viator! I’d read great things on Trip Advisor about Jonathan, the concierge, and he came through for us in a big way. Not only did he call Viator in the US for us, he and his staff then followed up with Sunbus Sydney for us to be sure we had return rides scheduled to the airport. He said this type of thing happens all the time with Sunbus and Viator, so should we need this again, we’ll be sure to work out some other arrangement.

Jonathan confirmed with us once again on Monday that our shuttles would pick us up on Tuesday, so we were all set. Until Tuesday morning. I was leaving on an earlier flight (due to lack of enough award seats on a single flight) and Sunbus picked me up on time. We only had one other stop before the airport. My friends were not so lucky. Their Sunbus shuttle never arrived and even though the bellman or concierge called the Sunbus office, no one answered. They ended up taking a taxi. Fortunately Viator refunded the fee they’d paid without a fight. So we all made it to the airport in time for our flights. On to the next adventure!