The day finally arrived when I was on my way for this much-anticipated South Pacific birthday vacation. Since I had booked the DFW-SYD flight on a separate ticket, I booked my MEM-DFW flight to arrive well in advance so that if something should go wrong and the flight should get canceled, there was still another MEM-DFW flight that would get me to Dallas in time to catch my flight to Sydney. That meant I got to Dallas mid-afternoon and the Sydney flight didn’t leave until after 9 PM, but I was fine with that. I have a friend who works near the DFW airport and we went out for a light dinner at the normal dinner time though I didn’t want to overeat knowing I’d have a full meal on board.

Once I got back to the airport, I decided to visit the Qantas lounge in Terminal D. It’s actually one of several small contract lounges located on the second floor of the terminal. To reach the club, enter the generic airline clubs entrance and take the dedicated elevator to the second floor. There the folks at the desk will point you to the correct lounge.

There is a small entry way where you can leave bags, a small business center with computers to the right and a dedicated First Class room to the left. Straight ahead the general seating branches out to the right along the windows. It was fairly crowded (this is the only Qantas flight, after all) so I don’t have photos of the seating area. There was some food near the seats but after just having a sandwich and anticipating what we’d be served on board, I didn’t try any of the food. 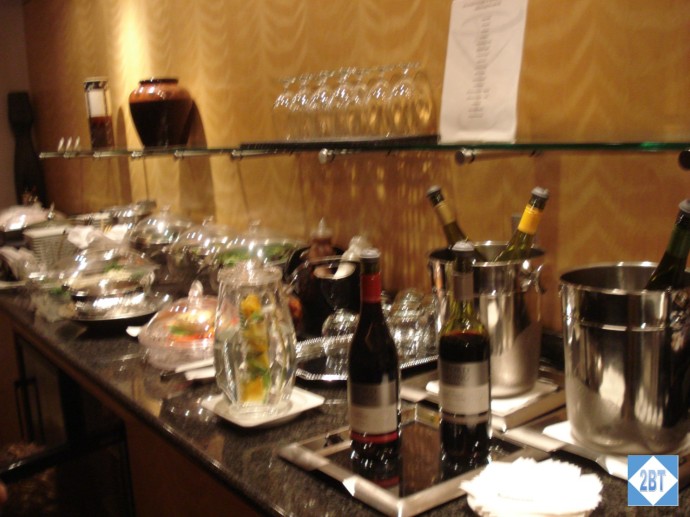 The First Class room was quite small and since I was using one of the business stations to recharge my electronics, I did not do much more than peek into the room for a photo. But it had its own small buffet and a TV. Since the door was open most of the time, it was not really any quieter than the main room. 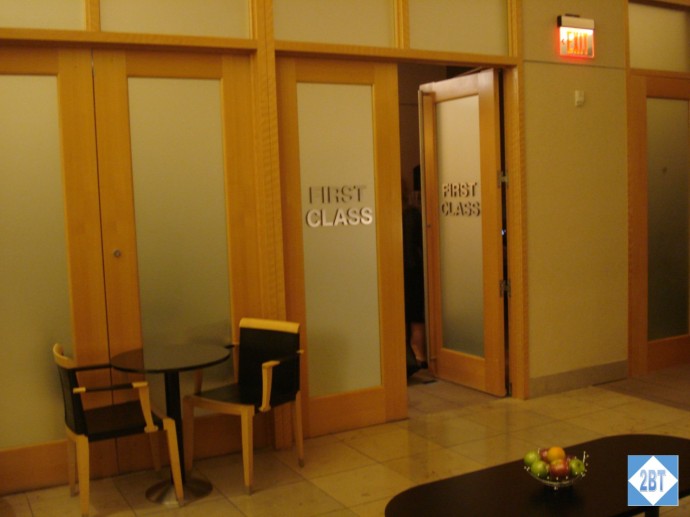 After getting my electronics charged, we were within just a few minutes of boarding time so I went back downstairs to the gate. Two side-by-side jetways are used and it seemed that the left one was only for First Class, which meant it was practically empty.

We entered through door 1L and I found my way to my seat on the left side of the plane, right in the middle of the cabin. My flight attendant, Cesar, introduced himself. He was an absolute delight throughout the flight and seemed to share with me the joy of flying on this big, beautiful bird.

While Qantas First Class seats don’t have sliding doors, the pods are quite large and private. In the sitting position the seat faces directly forward and you actually face a small drop-down table from the back of the seat in front of you. Below that is the storage pocket for the safety card and the in-flight magazine. Just below the magazine rack was the plug that accepted a US-style charger as well as a USB charger.  Below that was a cut-out at foot level that was perfect for storing shoes. The seat itself is nice and wide and very comfortable. I was surprised that I not only had a lap belt but that there was a shoulder belt too. That was a first for me on an airplane! 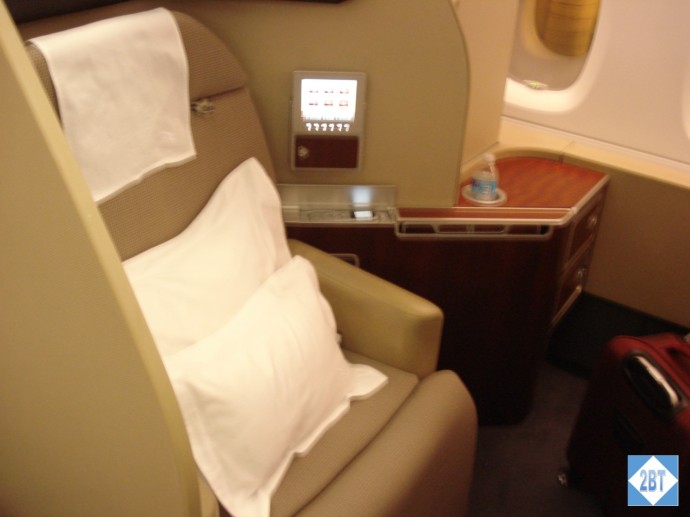 To my left was a small panel on the wall with the seat controls and in the left armrest was a remote for the in-flight entertainment. I later learned there were also seat controls on the divider behind my seat that the flight attendant could use to help us get our seats to the desired position. That was handy in that they could help without having to lean over us which could have been uncomfortable for both parties. The control panel also controled the window shades though they just stayed down for the entire flight until the crew raised them as we were about to land. The seat had a massage function but I forgot to check it out! 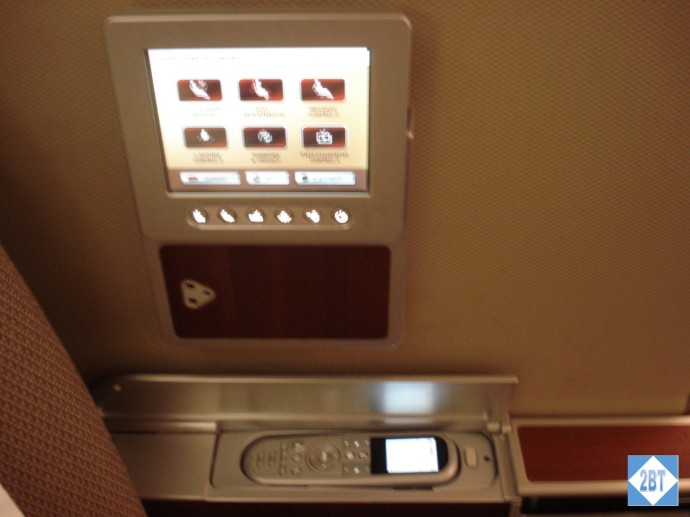 Further to my left, next to the window was my side table which had a sunken holder for a bottle of water as well as two drawers where I could store whatever I wished. 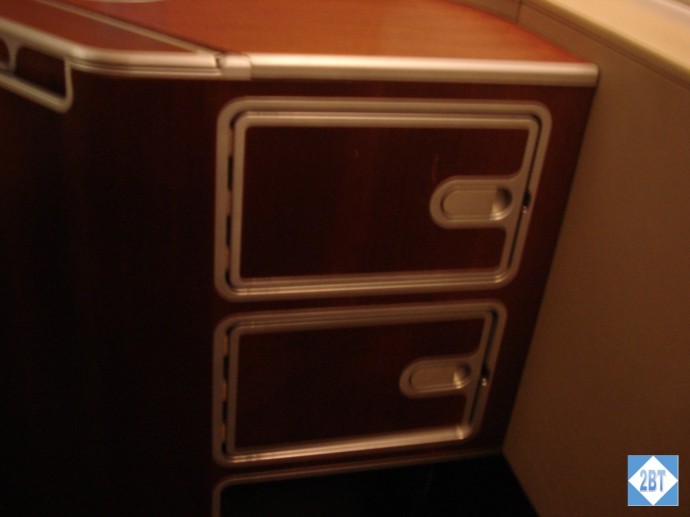 In front of the table was my ottoman (with storage space beneath) and was where the entertainment screen popped out from the side. I was glad that, unlike British Airways, Qantas allowed the screen to be in a viewable position even during take-off and landing. The ottoman had a seat belt on it, so if two people wished to visit or dine, they could both do so with seat belts fastened in case of turbulence.

As the seat is changed to a recliner-type position and then to the lie-flat position for sleeping, the chair actually swivels toward the windows so that it is at an angle where it can extend all the way to reach the ottoman.

Then there were the pajamas. A simple cotton pullover top and pants and the slippers. I loved the logo on them and took them home with me but unlike some people, I wouldn’t have thrown a fit if only business class pajamas were available in my size!

I’d heard about how quiet the A380 is and that certainly proved to be true.  Even though I had a window seat, my actual seat was by the aisle and I didn’t have a good view outside.  So I could barely tell when we pushed back.  The best way to describe the way this huge plane moves on the ground is “lumbering”.  It’s not so graceful on the ground but is an absolute beauty in the air!  We were wheels-up at 21:44 and just six minutes later the captain had turned off the seat belt sign.

Shortly after takeoff the crew got busy with the meal service. This was much appreciated as many of us wanted to eat and go to sleep as quickly as possible. We started off with canapés of Ostreta caviar tartlet with crème fraiche and crostini of mozzarella with salsa verde and pickled fennel. I recall eating the caviar and the tart but can’t recall if I finished the crostini. Neither is something I’d order in a restaurant but it’s always good to sample unfamiliar foods, right?

Next was the cream of mushroom soup with sourdough croutons. Hard to mess this up and it was quite good. Not being a huge ham fan, I skipped the prosciutto though with all the accompaniments (peaches, ricotta, hazelnut and fig vincotto) it may have been quite good. 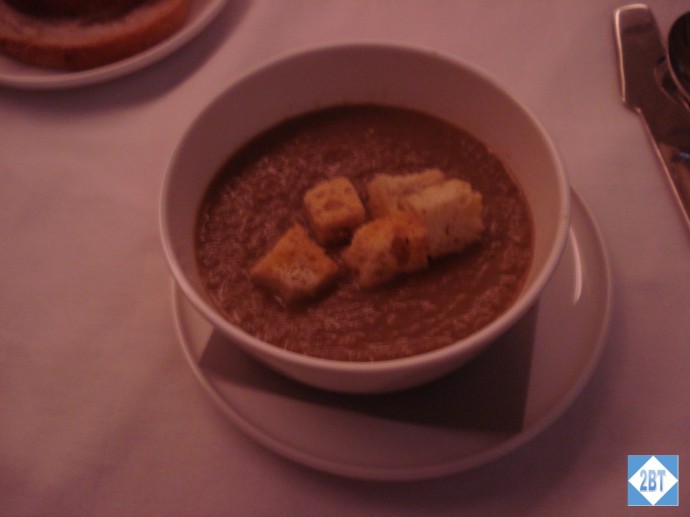 I skipped the small plate options, hoping to save the steak sandwich for a snack later, since I’d read good things about it. Unfortunately (?) I was never hungry enough between dinner and breakfast to want a snack. Probably a good thing but I think if I have the opportunity again I’ll be sure to try it.

Next up was the entree and since at that point I was planning on the steak sandwich as a snack, I bypassed the beef tenderloin and ordered the Pan-fried Arctic char with pumpkin puree, zucchini and aioli. I wish I’d chosen the steak. It wasn’t that the fish was bad, it just wasn’t great. The pumpkin puree and the zucchini were quite good. Perhaps it was the aioli I didn’t care for.

The entree came with a side salad and bread. Cheese was also available if you wanted it. 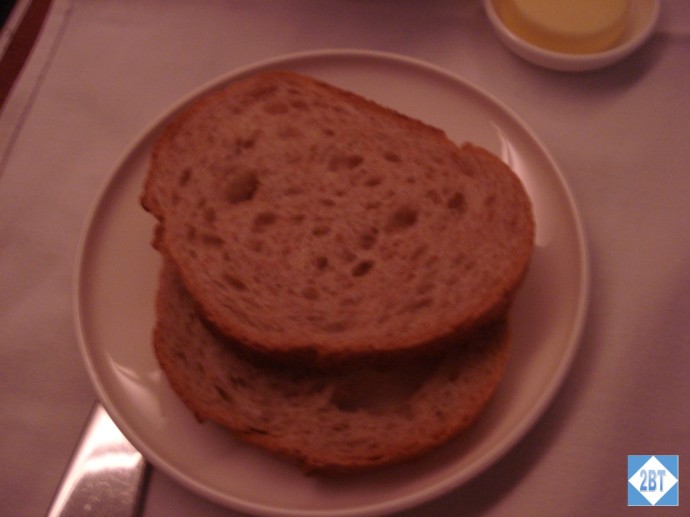 While I typically don’t drink hot tea at home, I find myself drinking it quite often on vacation so I was sure to order some here. Regular black tea – though I was only given this one little sugar packed for this pot of tea. Knowing I should probably reduce my sugar consumption anyway I didn’t ask for more but I’d normally use about four times that amount for a pot of tea this size!  One thing I appreciated was that the tea was served at the perfect temperature.  Plenty hot, but not too hot to drink.  Well done, Qantas!

After dinner the cabin lights were dimmed for the night. I almost never go to the movie theater but was surprised at how few of the movie selections I wanted to see. But I found a couple of movies to hold my interest. Cesar made up my bed and I tucked in for the night. I got about five to six hours of sleep. Not great, but not terrible.

When it was time for breakfast I started off with a glass of orange juice, as I like to do every day. Unlike my usual routine, I skipped the cereal and went straight to the pancakes. These came with raspberries, mascarpone and maple syrup. They were quite good! I don’t have a photo of the fruit plate but it had orange slices, honeydew, cantaloupe, pear, pineapple and strawberries, all fruits I enjoy.

Orange juice with a side of marmalade

After breakfast we topped things off with a smoothie. Not sure what was in it but it was tasty! 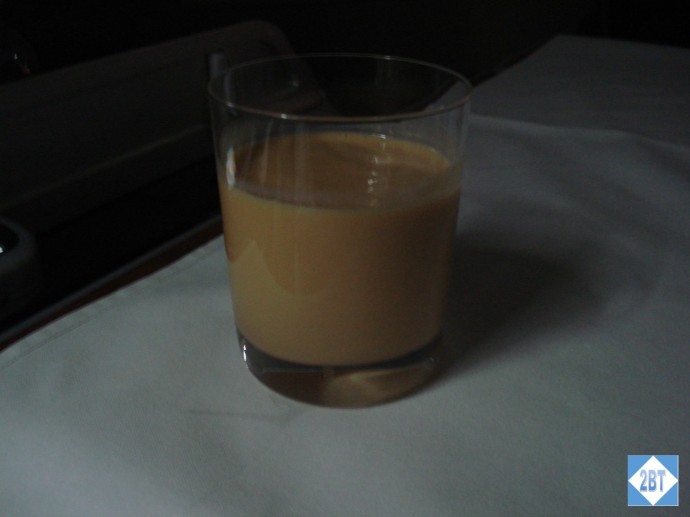 Not too much later we were on our approach to Sydney. I couldn’t believe seventeen hours had passed so quickly! And while the flight was great, I was ready to get off the plane. We touched down on time and thanks to the priority card given to premium cabin passengers, I was through immigration in no time flat. I spent more time waiting on luggage than I did with the immigration officer.

Then it was a quick pass through Customs and I was land-side. While waiting for my friend’s flight from LA I was able to catch up on email and social media. Once she arrived we found the meeting point for our hotel shuttle and about a half-hour later we were on our way to the Park Hyatt.

For those wanting more detail on the menu, including alcohol choices, click on the photos below to enlarge. 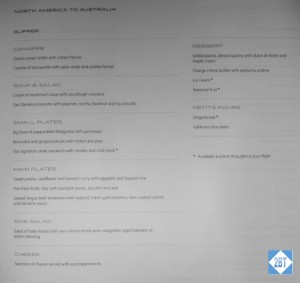 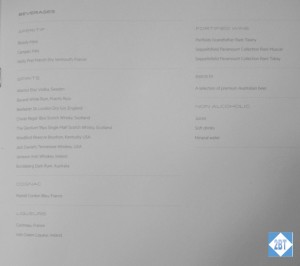