I arrived in Los Angeles very late on a Friday night and stayed here for one night while waiting for a friend who would fly in the next morning. I took the free shuttle to the hotel. Note that LAX is extremely busy, even late at night, on Friday evenings and it may take quite some time to get to the hotel, even though it’s just a short distance away.

As a platinum member I stepped to the priority check-in lane – but unfortunately got there just after a small group of people stopped to ask the front desk staffer some questions. As a result, the people in the non-priority lane actually got assisted before I did. Part of me wishes they’d been directed to the other check-in lane but the staff member was very professional and answered their questions thoroughly before they left. Once he assisted me it was a very quick process to get my room key and choose my welcome amenity and I was on my way to a club room on the top floor. 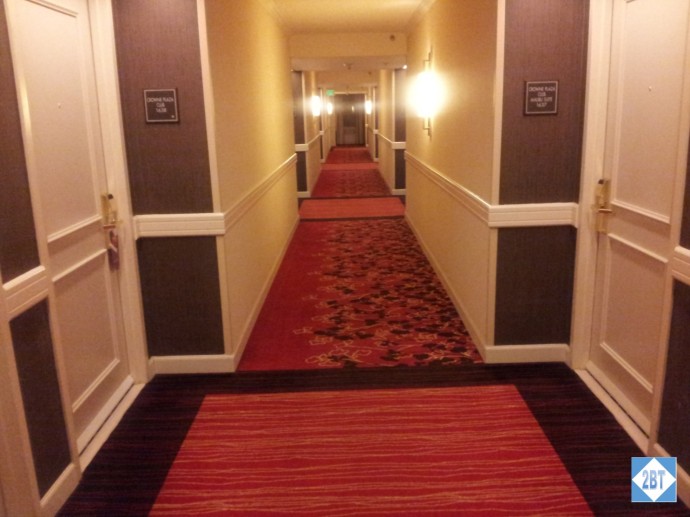 The room was quite large and had a connecting door, though fortunately I did not hear any noise from next door. The king-sized bed was quite comfortable and stocked with plenty of pillows of varying textures. Each side of the bed had a nightstand and a chair and ottoman were beside the bed. As I was only here for the night I used that for my bag. Across from the bed was a desk with easily-accessible plugs, the TV and minibar and counter space. Underneath the counter was the coffee maker and the cups and glasses. 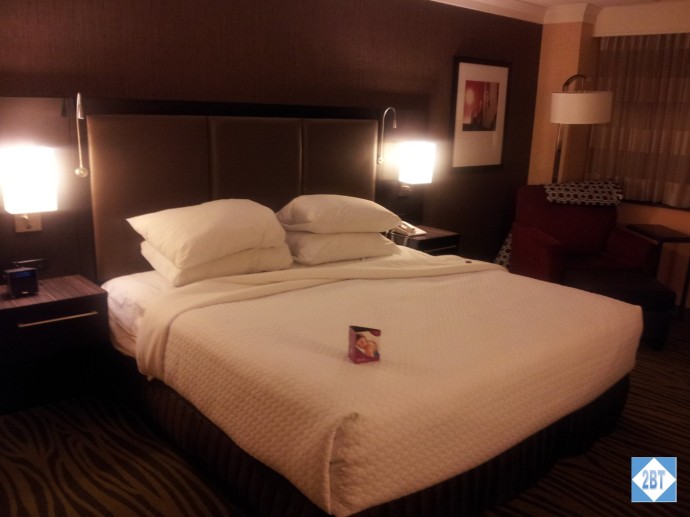 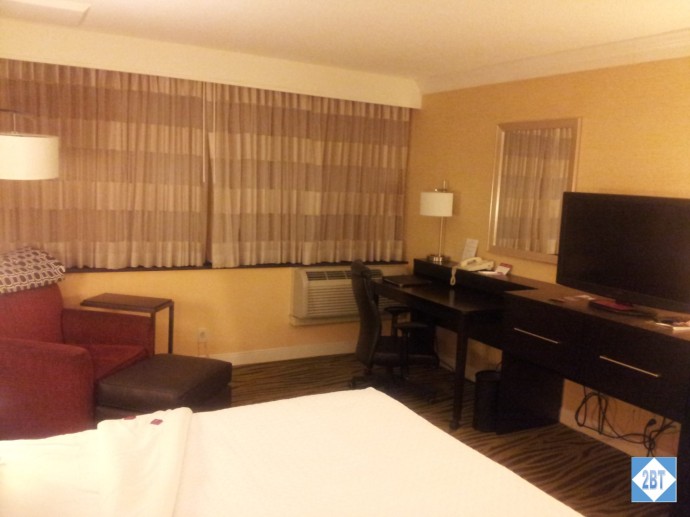 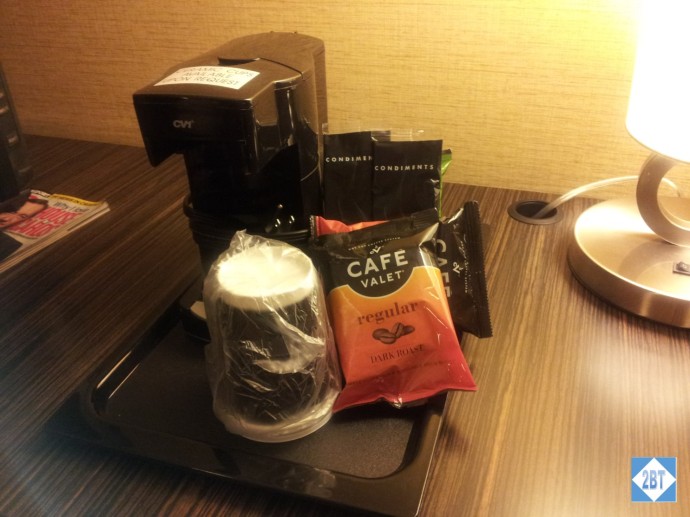 The view was nothing special, I found out the next morning, but then it’s an airport hotel and I wouldn’t really expect one.

Inspecting the bathroom, I realized I was in a wheelchair-friendly room as there was no tub but a roll-in shower with a fold-down seat. This was my first time in a room like this. The shower was hand-held and while it could be affixed to the wall, there was no way to easily use it hands-free as it was mounted in the middle of the wall so it could be reached by those sitting on the bench. While that was slightly annoying, it just made me grateful that I am not required to have to use a setup like this all the time. One thing I did find odd with the shower is that there were no shelves or soap dishes, so I had to pull down the seat to use it for that purpose. This shower naturally leaked a bit but the bathroom did have a central drain which kept water from puddling up too badly. 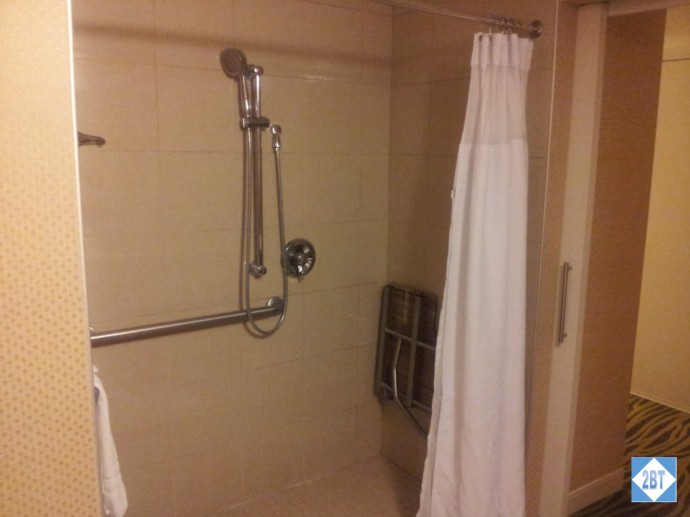 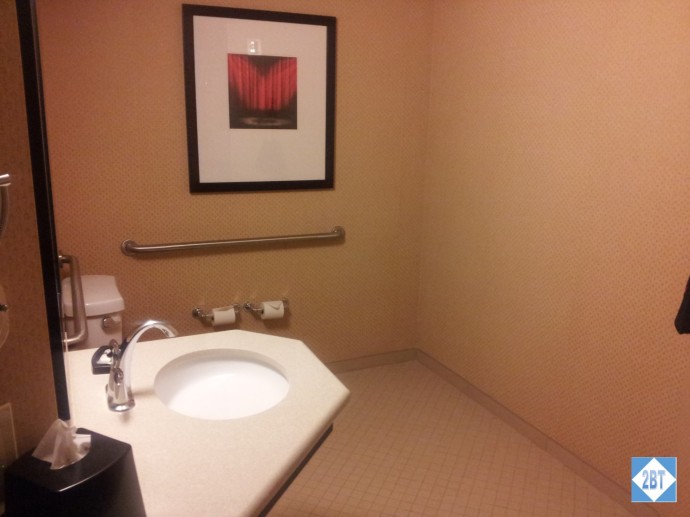 A hair dryer was provided as were bath amenities from Temple Spa.

Since the club floor was closed on the weekend, I was given a voucher for the breakfast buffet. It was quite good and I ate more than I intended. 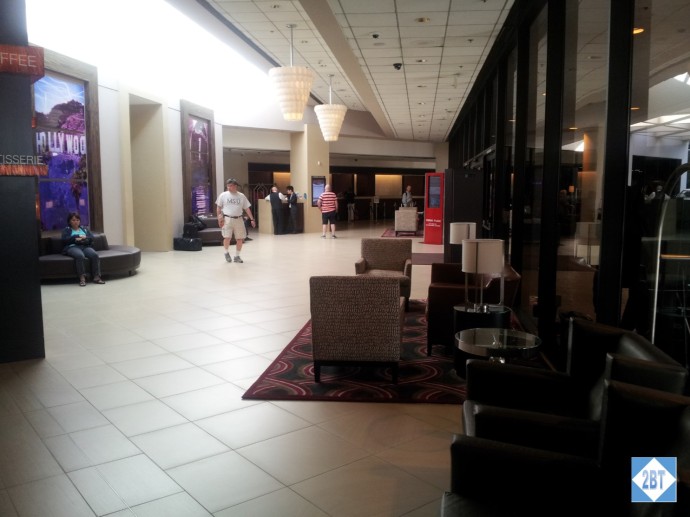 The shuttle ride back to the airport was much quicker as the traffic was way less insane than it had been the night before and I arrived in plenty of time to meet my friend’s flight.

I redeemed 25,000 IHG Rewards Club points for this stay, which was perhaps not the best value but it was a better choice for me.