In 2014 I flew longer and further than I had done in quite some time but in 2015 I actually flew even further and longer thanks to my two week trip to Australia and Fiji.

Domestically, ski trips took me to Steamboat Springs (Haden via Atlanta) and to Salt Lake City (via Dallas/Ft. Worth) and visits to my friends sent me to Los Angeles (via Houston on the way out and via Denver on the way back) and to Chicago (ORD).

The good thing about my domestic travels was that every trip was either paid for with airline miles, credit card points or travel credits from a credit card.  None of the trips were free but the points, miles and credits sure help to keep the costs down!

Internationally my Birthday-With-A-Zero extravaganza sent me to Sydney (via DFW), to Ayers Rock (AYQ via MEL and ASP/Alice Springs), to Melbourne (returning via ASP), to Nadi (NAN), Fiji and home to Memphis via LAX and DFW. 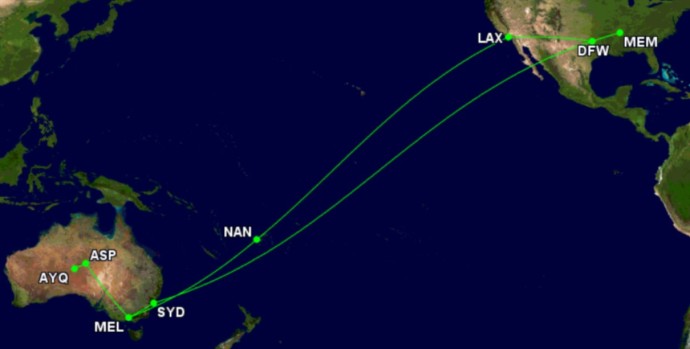 So despite two trips across the Atlantic last year, I flew 1500 miles further and had 4 hours more in flight time than last year.  I choose to think that those extra miles and hours were spent aboard the Qantas first class flight from Dallas to Sydney.  You’d never think a 17-hour flight could pass so quickly!

I won’t be flying further or longer in 2016.  I’ll still have two trips but my international trip is to Europe and  some of the ground there will be covered via a river cruise.  I’m looking forward to seeing what the new year brings!

Where will your travels take you in 2016?