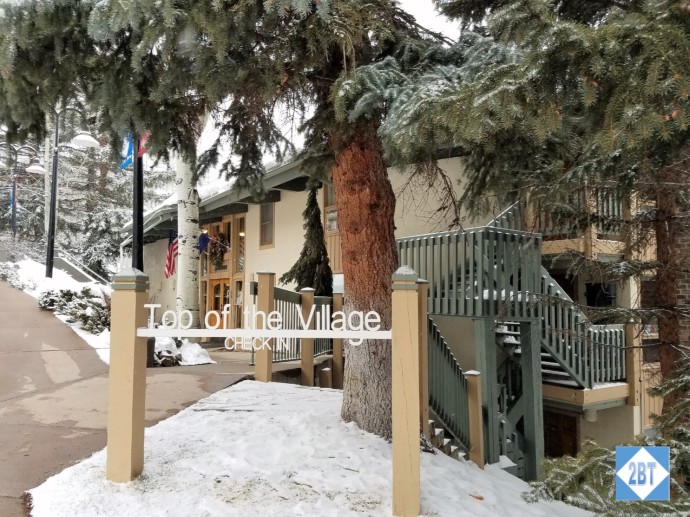 The Gatehouse, home of the front desk, pool and hot tubs

I stayed here for almost a week with my ski club. TOV has lots of good things going for it but could use a refresh.

There are four buildings: Leaf, Slope, Trails, Summit. Each building is slopeside (ski-in with a small hike to ski-out) and each condo has a slope view.  Our group utilized both 2BR and 3BR condos. I am not sure if there are larger or smaller units.  Each unit is independently owned, so furnishings and decorations are up to the owner. As you might expect, some units have been refreshed more recently than others.  Each unit has its own wi-fi router though I was surprised at how my signal sometimes dropped when I was in a bedroom with the door closed.

Each building has only one (slow) elevator and sometimes it seemed to get stuck.  As we were on the second floor we’d walk up on those occasions, but at altitude that’s a lot more difficult than it looks!

True to its name, TOV is located at the top of Snowmass Village.  It’s not within walking distance to anything but they have an on-demand shuttle that will take you anywhere you want to go within the village or to the bus station for rides into Aspen.

Check-in is at The Gatehouse, which is the administrative building across the road from the condos.  In this building you’ll find a gathering room which is excellent for welcome receptions and the front desk.  There’s also a large deck with grills that would be great in the summer.  Downstairs are locker rooms, a small gym and a sauna. 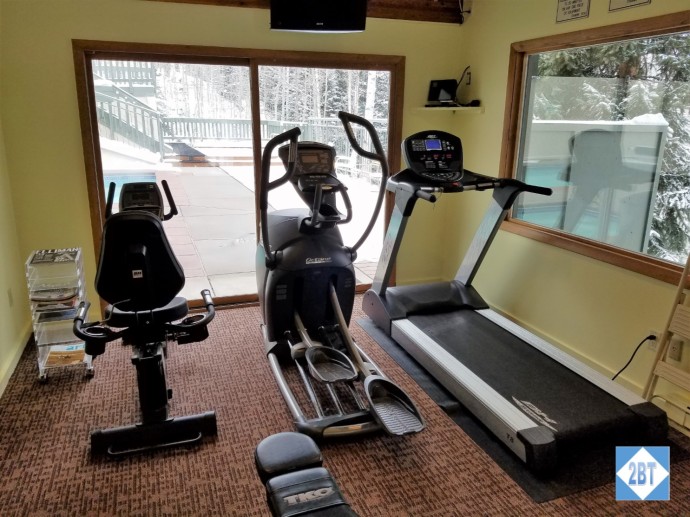 Cardio machines in the tiny gym 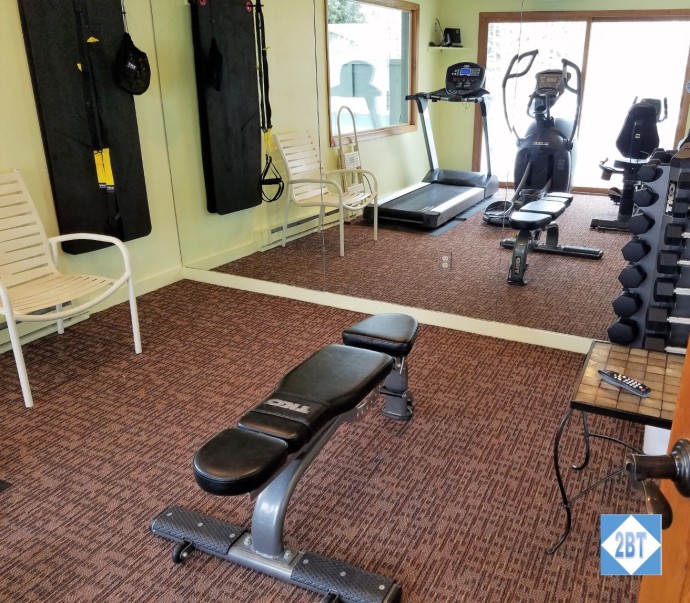 A bench with hand weights. Resistance bands are available as well.

Outside are a heated pool and two hot tubs.  The downside to having the hot tubs at this location is that it’s a chilly walk back to your unit in the winter.  I ended up changing into sweats before trekking back to my room.  If you’re in the Summit building, it’s QUITE an uphill walk back to your unit. In Trails you’re still walking back uphill while in Leaf you’ll be walking uphill to the hot tub and downhill going back. 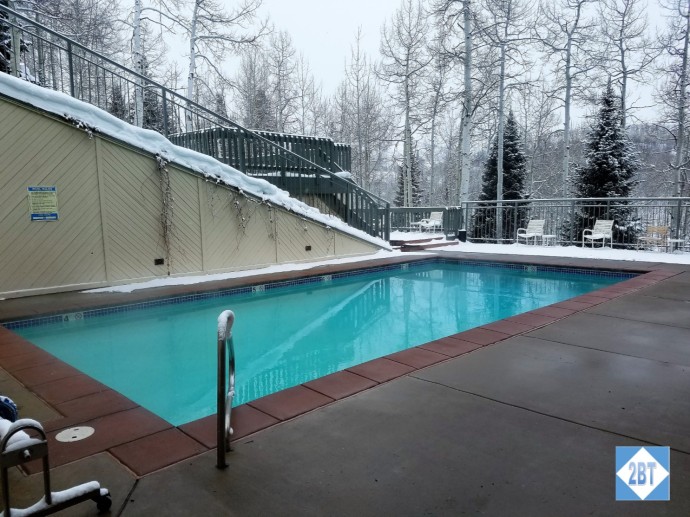 Heated Pool – in the back is a deck area which would be great in the summer. Hot Tub #2 is just below the deck, out of sight from this angle. 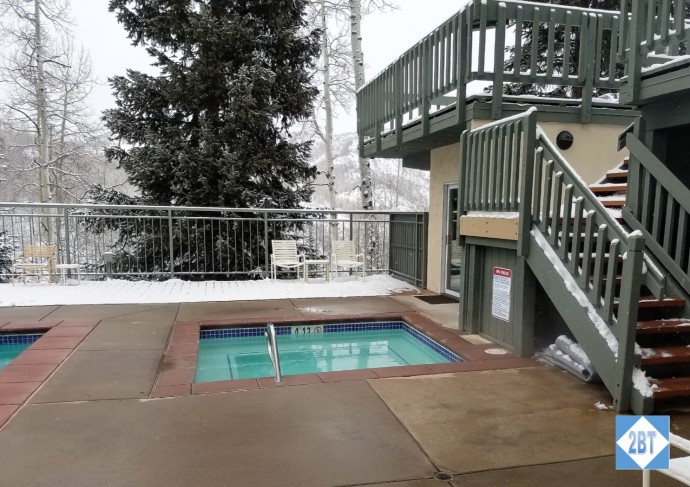 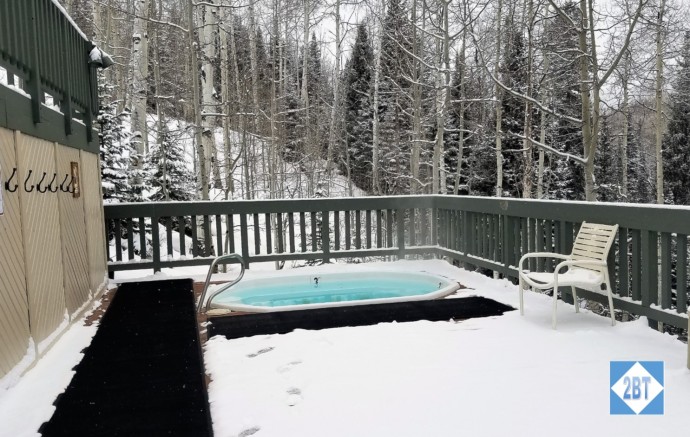 Five friends and I were in Unit 203 in the Slope building. 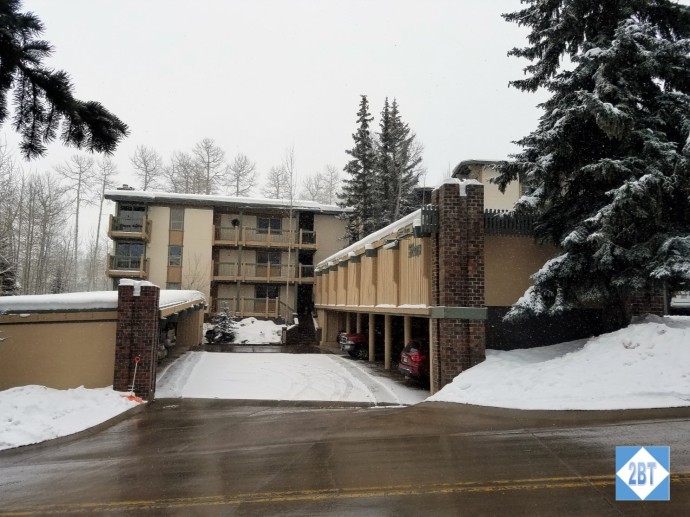 One of two entrances to the Slope building. To the right under the tree you can see a white car in the second (main) driveway.

It’s a 3BR unit with king beds in both the master and second bedroom and twins in the third.  Sometimes the third bedroom is quite small but that was not an issue here.  My roommate and I were both pleased by the size of the room.  We had a large dresser with four drawers each, which was fantastic. There was a plug by my bed I wanted to use for charging my phone and tablet but when the light switch by the door was turned off, so did the plug. We ended up unplugging one lamp to ensure we could leave the switch on at all times.  My roommate, whose bed was against the inner wall, had a plug there she could use. 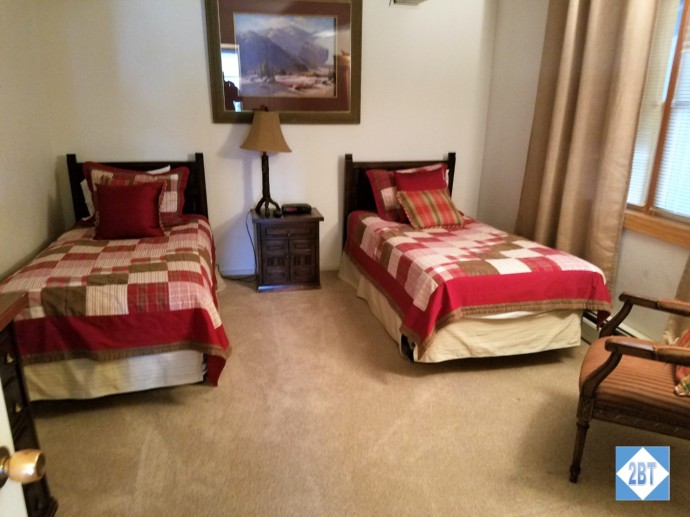 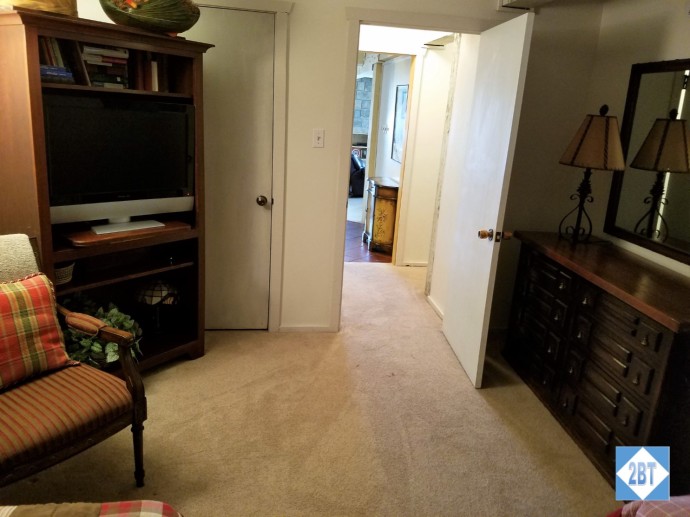 Our bathroom was in the main hallway and was fine for one person at a time but no way could we both have been in there at the same time. 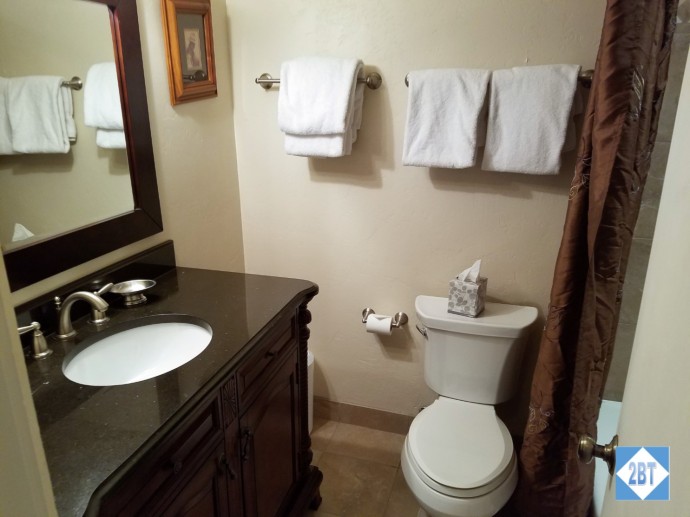 Hall Bath – Liked the high counter on the sink. Lights could make the room very warm. 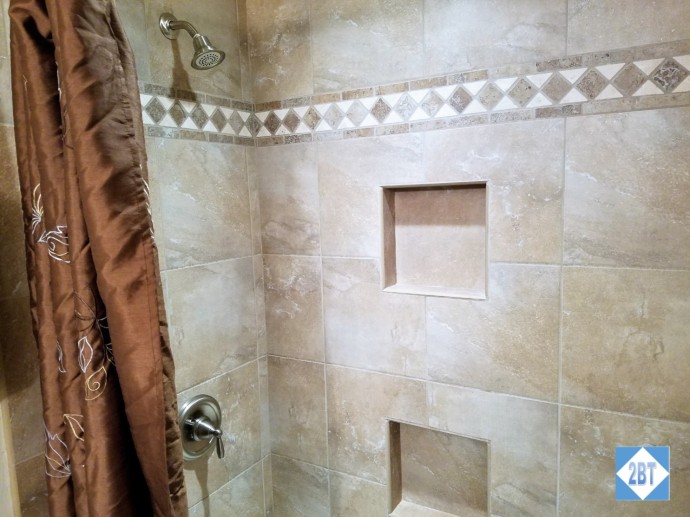 Hall Bath Shower/Tub – No Curtain Liner for some reason. Soap tended to stick to the flat shelf in the shower.

The master bedroom has its own heating system and its own balcony.  That’s great if the couple staying in there likes a different temperature from the rest of the condo. 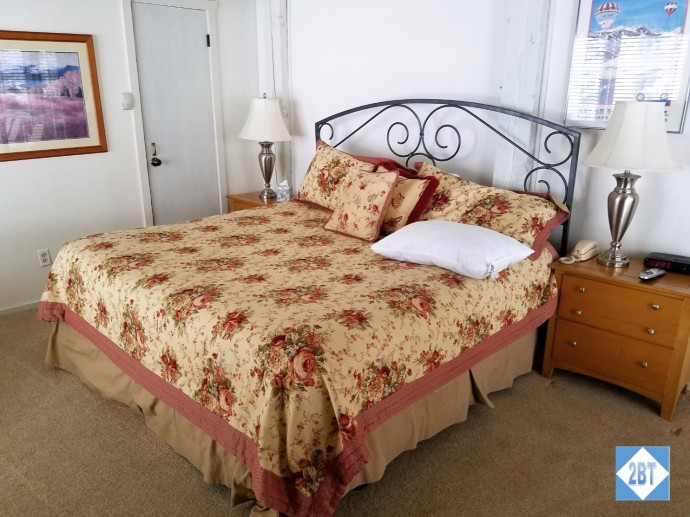 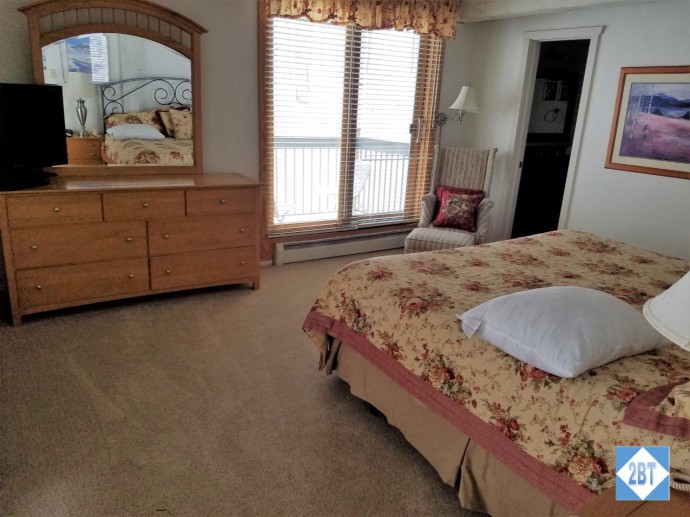 Master Bedroom Dresser and Balcony Doors that face the slopes

The master bath had a large walk-in shower. 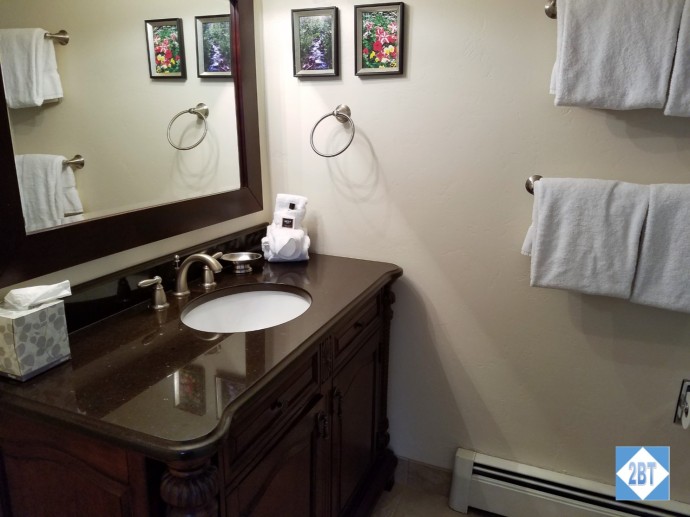 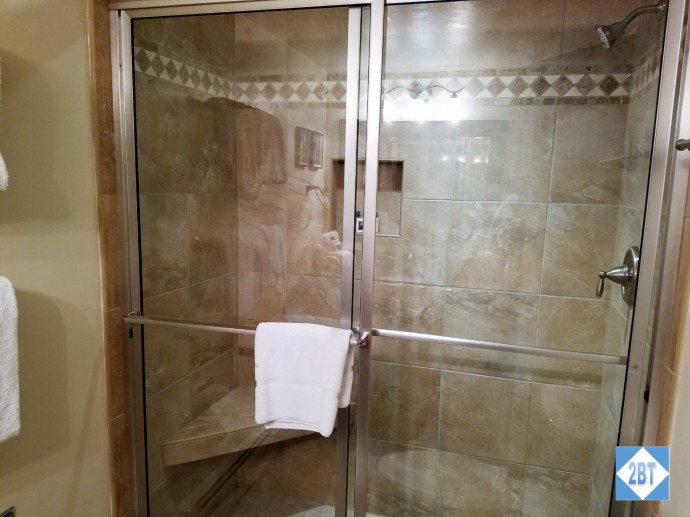 The second bedroom also had a king-sized bed though it was a bit smaller than the master, of course.  Its window overlooked the slopes as well. 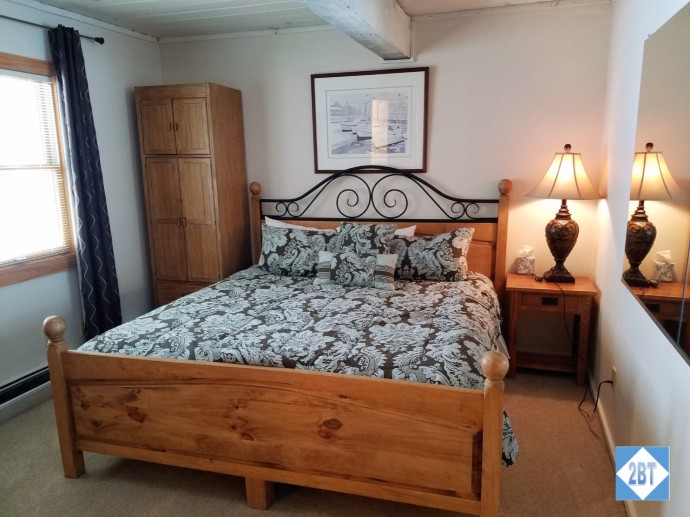 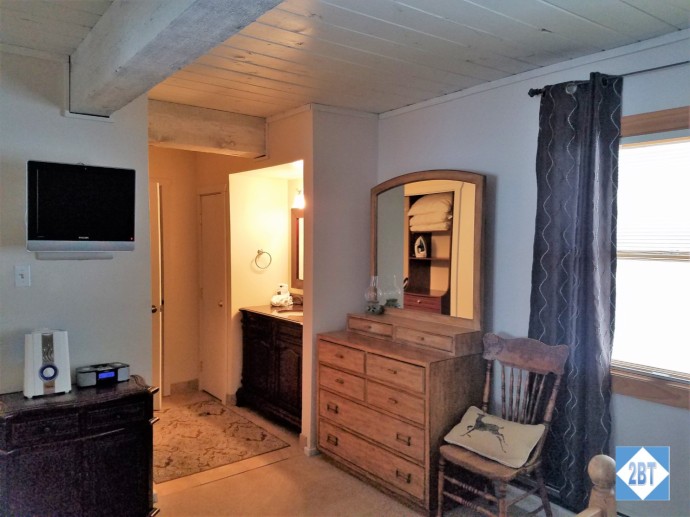 Bedroom #2 – looking toward the sink which is opposite the closet

In this unit the sink is outside the bathroom.  Opposite the sink is the closet, which has an odd set-up. The closet doors have been removed and there’s a large piece of furniture with lots of shelves, though it’s not a bookcase.  On the sides of the closet area is where clothes may be hung up. 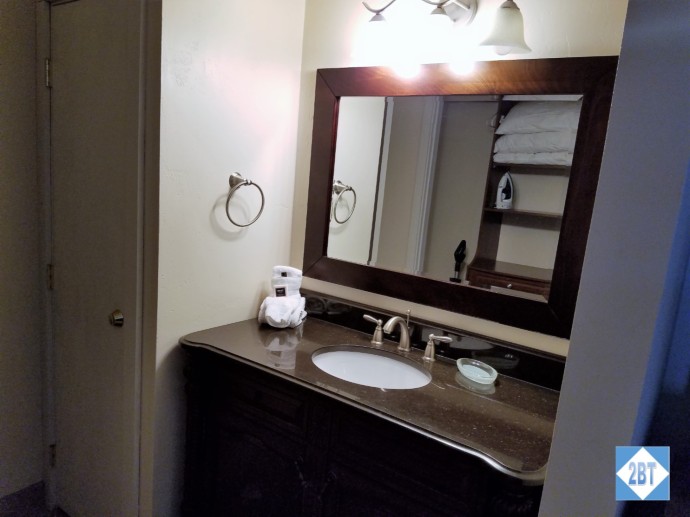 Bedroom #2 sink – the “closet” is reflected in the mirror 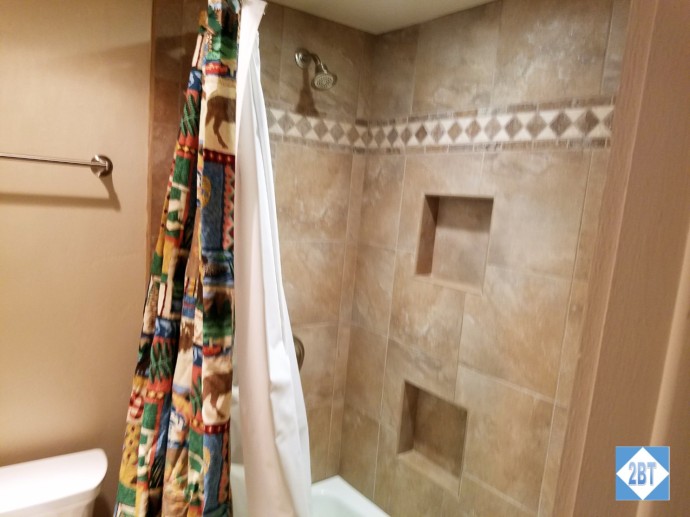 The galley-style kitchen was fine for two people working in it at the same time.  It featured a bar with six bar chairs and behind the bar there was a dining table with six chairs as well. 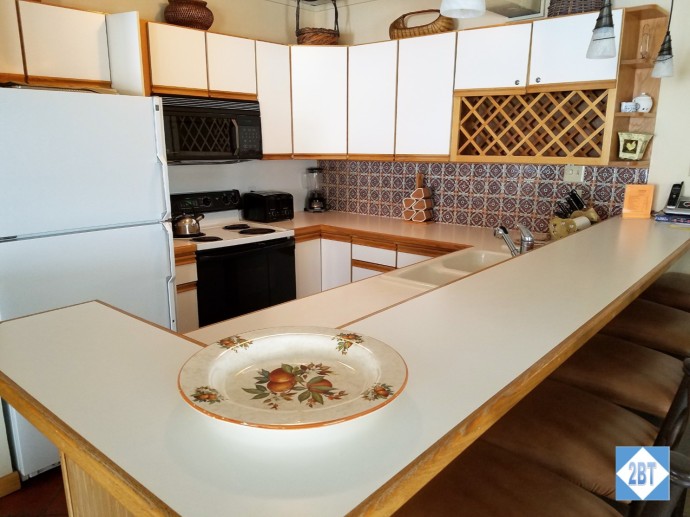 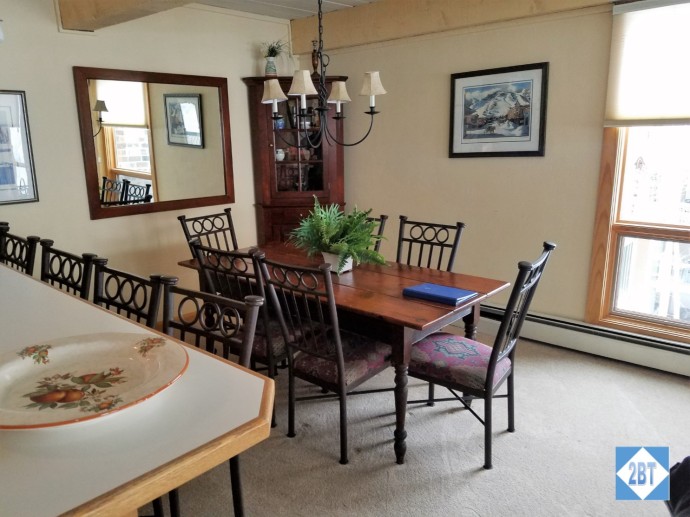 The living room had an L-shaped couch (which I assume was a sleeper sofa) and a big, comfy recliner.  The sliding glass doors opened on to a balcony and a view of the slopes. A grill was on our deck, though we did not use it. 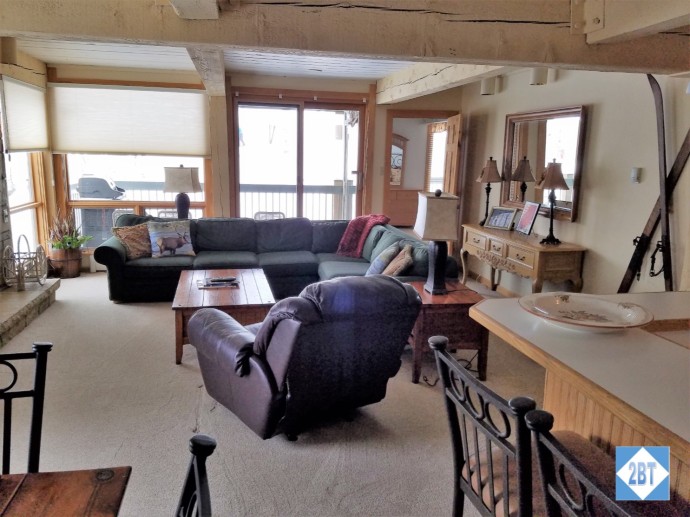 A stackable washer and dryer was in the unit as well.  We made good use of it so we’d have less laundry to do at home when we returned. 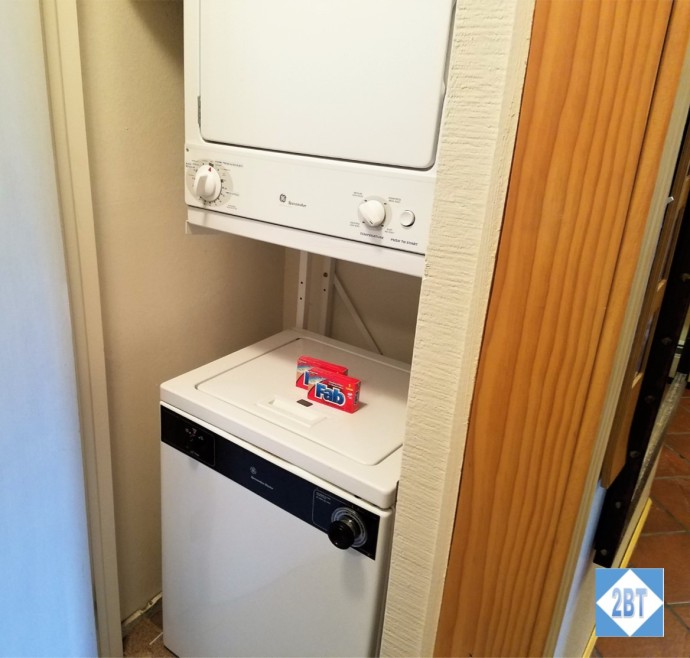 While our unit had some cubbyholes on the wall in the entry hall, all units have ski lockers just outside the door for storing skis, poles and/or snowboards.

The buildings are not new and do show use.  But I’m told this complex is one of the most reasonably-priced in the area for slopeside lodging.  This was the second time our group has stayed here and I suspect we’ll be back the next time as well.