My colleagues and I left Hinckley in the late afternoon and made our way back to London so we’d be near the airport for our return flights the next day. As I have Gold status with Hilton HHonors (thanks to simply having the Hilton Surpass card by American Express) I considered the Hilton attached to Terminal 3 but it was a good bit more expensive and I was leaving from Terminal 2 anyway so I booked the DoubleTree which is located between T2 & T3 as most of my colleagues were flying Delta out of T3 so it worked for them too.

Fortunately we arrived just before a large tour group and were able to get assisted promptly. Don’t know if it was because of my Gold status or not but I got two (!) cookies upon check-in, which made me happy. I wasn’t proactively offered a room upgrade and there may very well have been a good reason for it. I knew we wouldn’t be spending much time in the hotel anyway so it didn’t bother me though I was curious as to why I wasn’t given a room on one of the HH-designated floors though, again, I have no idea of what the statuses were of others at the hotel.

The elevators were just behind the front desk and I took mine up the the third floor. Exiting the elevators I turned right and right again and my room was at the far end of the hallway. 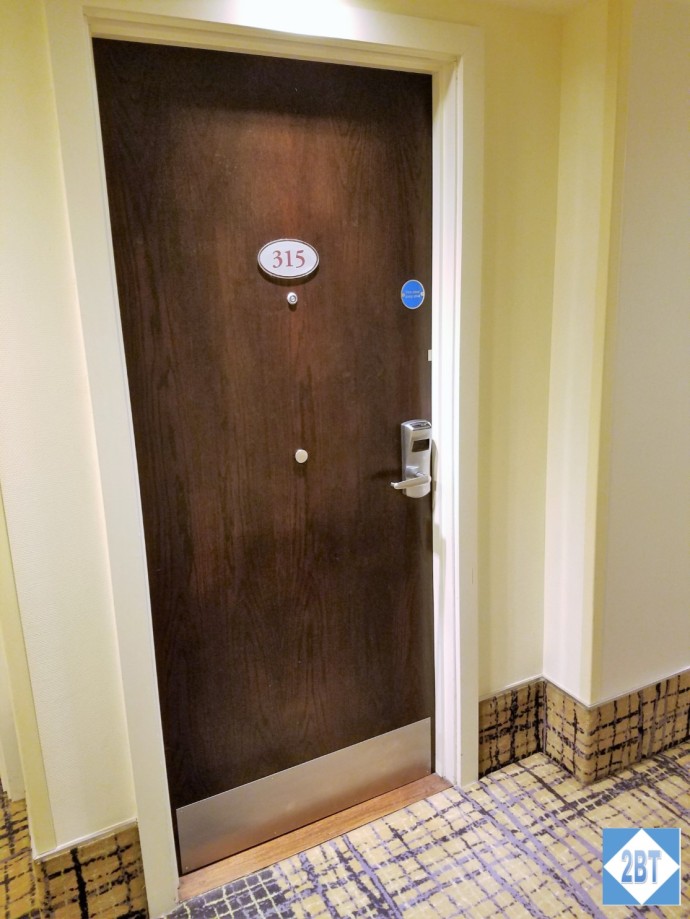 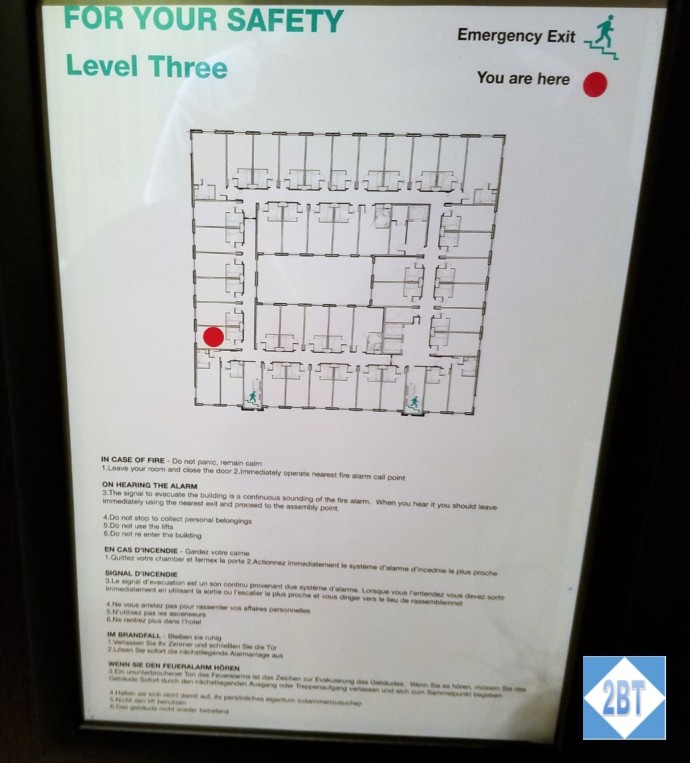 It had the standard hotel room layout: short entry hall with a closet on one side, bathroom on the other, then the room opened up with the bed on one side and desk on the the other.

The room was fairly compact, especially compared to the one I’d had for the four days prior. But it’s an airport hotel and I suspect not intended for long stays.

There was a very comfortable king-sized bed on the right with a small loveseat/large chair located between the nightstand and the wall. There were no easily accessible outlets on the left side of the bed near the chair but there were a couple on the right side of the bed that were not terribly hard to reach though I had to unplug the hotel’s alarm clock to be able to use both outlets. Hopefully next time the hotel is refurbished more reachable outlets will be added. 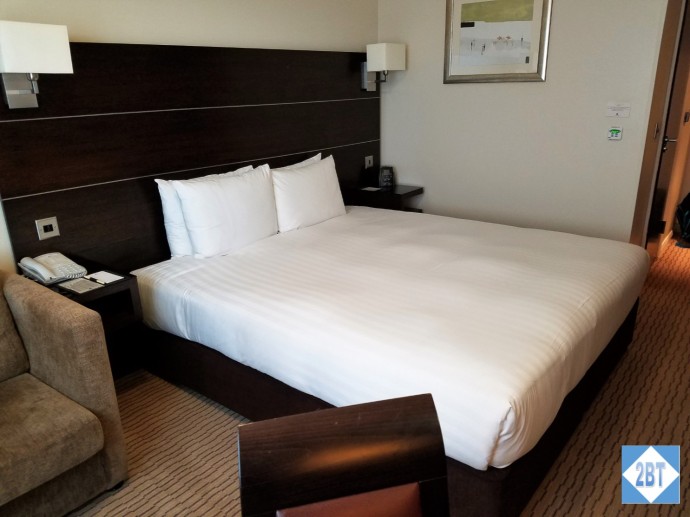 Across from the chair, in the far corner of the room was the desk which did have easy-to-reach outlets. On it were two complimentary bottles of water though for such a short stay I didn’t need both. Beside that was a narrow table with a lamp and the TV. 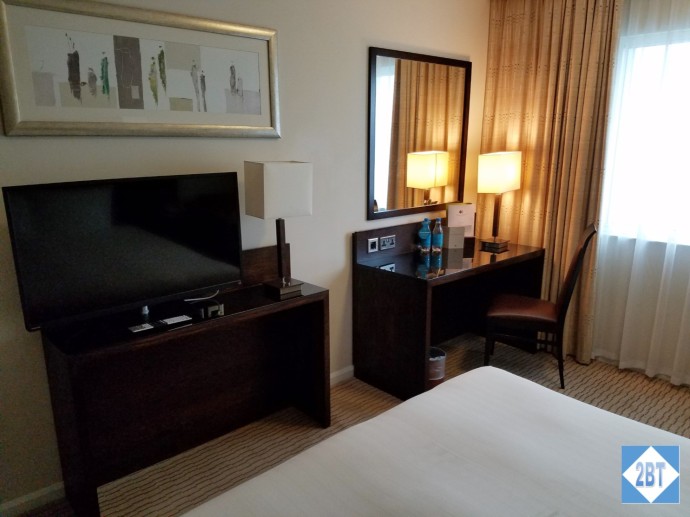 Between that table and the closet was a small ironing board and iron, both appeared to be permanently attached to the wall. The closet had plenty of hangers for a one-night stay and several shelves. The safe and coffee/tea station occupied the middle of the shelves and that was the hair dryer’s home too. 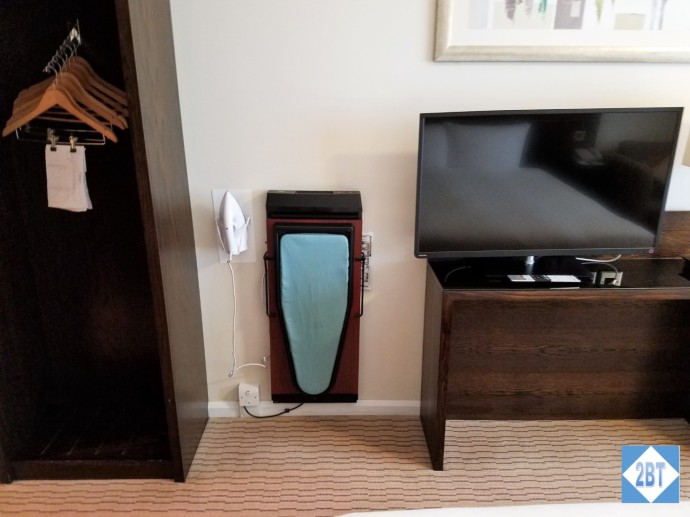 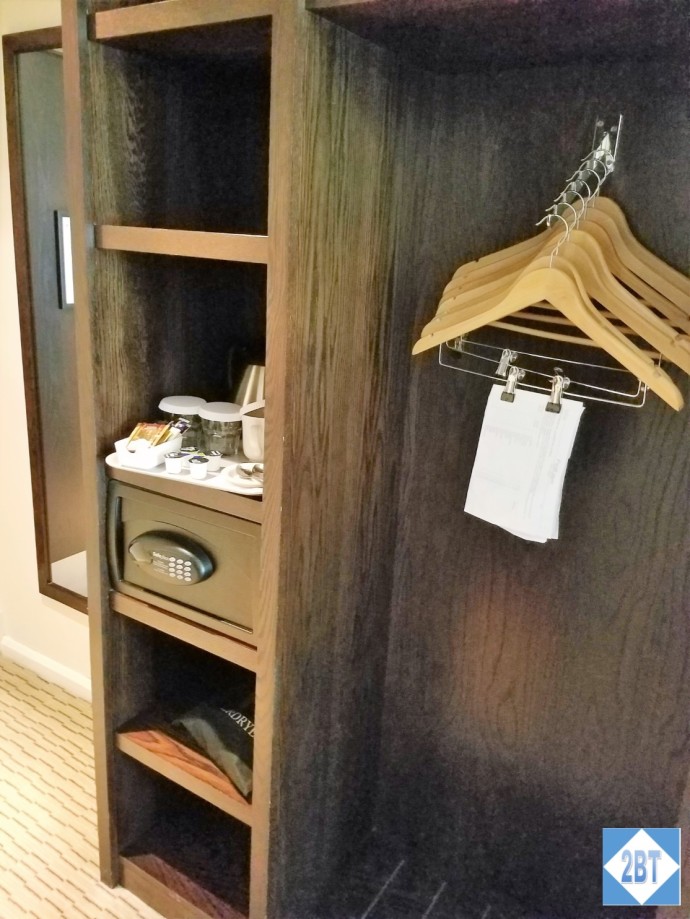 I found the bathroom door a bit puzzling. I realize there are fire doors at various points in the hallways and understand their purpose but the bathroom door was quite heavy and had to be propped open. Since I had the room to myself I found that quite annoying and once I was in for the night I propped the door open.

The bathroom was also compact with the sink on the left, toilet on the right and shower tub straight ahead.

There was not much in the way of counter space around the sink but, again, for a one-night stay that wasn’t the end of the world.

Toiletries were by Crabtree & Evelyn.

The shower/tub had that annoying glass half-wall instead of a shower curtain or full glass door though I will admit this one seemed to keep the floor dry better than some others I’ve experienced.  The tub was a bit narrow and had a bigger step up into it than most tubs here in the US.  I’m just curious if Europeans always stand sideways in the shower?  Because I couldn’t comfortably stand with my feet shoulder-width apart in this tub. 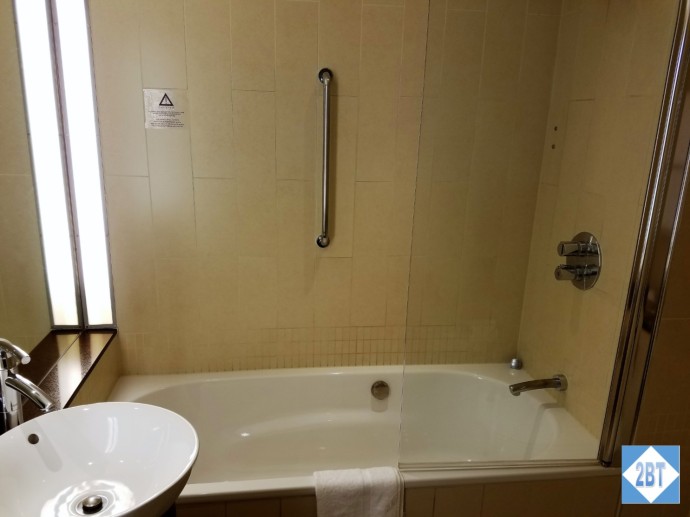 Across from the front desk(s) – which were more like three manned kiosks than an actual desk – was the bar.  On the right side of the room was a sweeping glass staircase leading to a second level with a few more seats and meeting rooms.

Looking at the bar from the second level. The door visible at top right leads to the gym and the windows over the bar look into the gym itself.

This level is also where the tiny gym was located.  Being so small you wouldn’t think it got much use but when I stopped in one evening there were several people making use of it though it was empty the next morning. 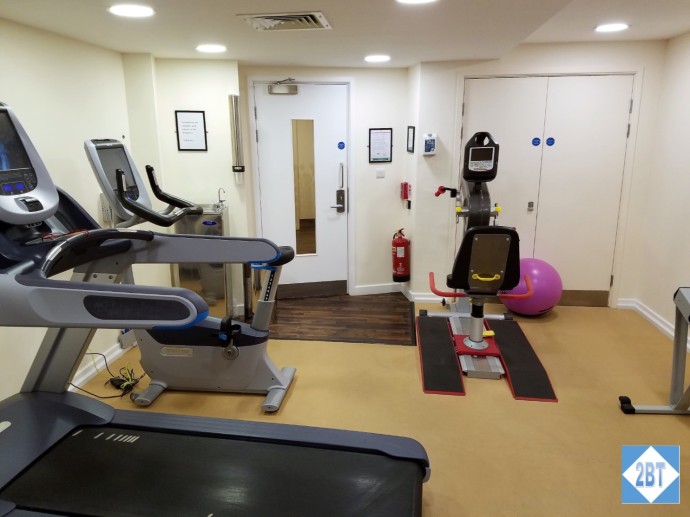 Just off the bar area, under the staircase, is the entrance to the 745 Restaurant.  As a Gold HHonors member my buffet breakfast was complimentary.  The hostess offered to bring me a pot of tea, which I accepted before heading to the buffet. 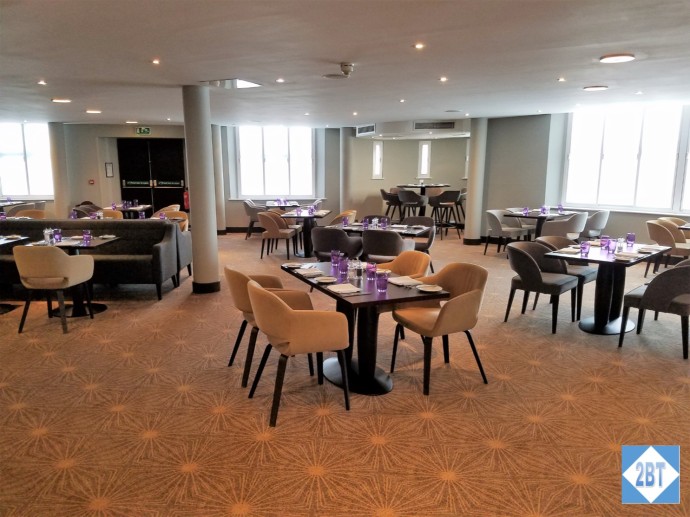 The buffet was fairly busy but had lots of different things to offer. 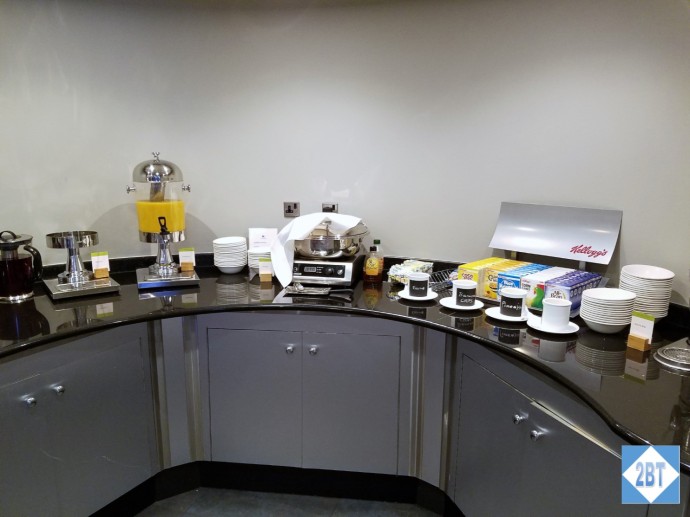 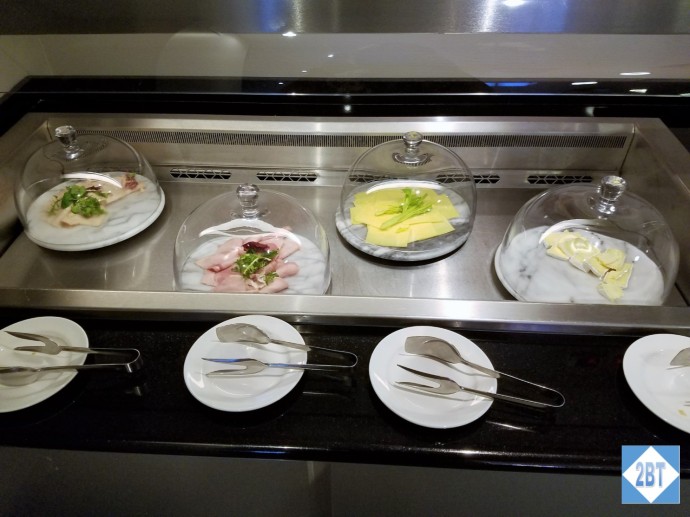 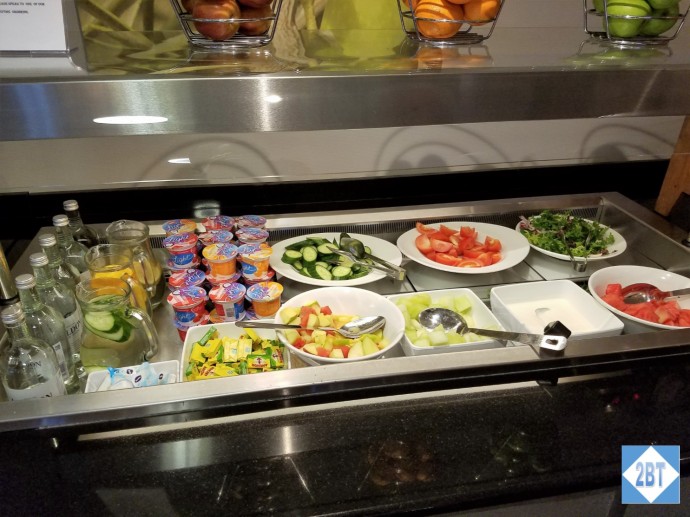 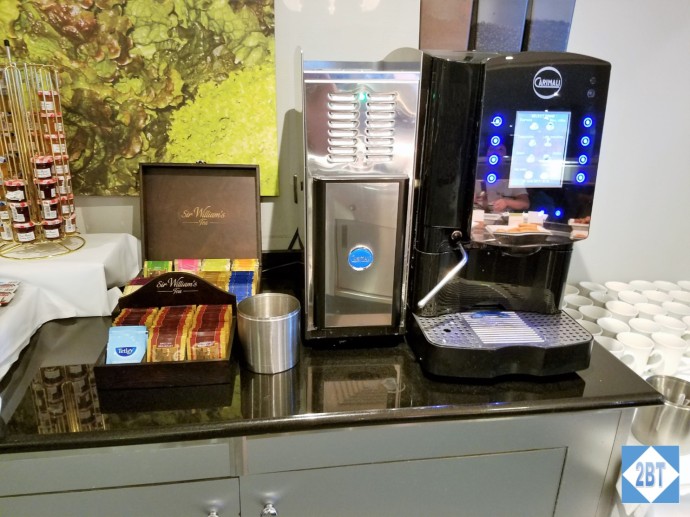 I don’t know if I could have ordered off the menu for free or not but I found plenty to eat. 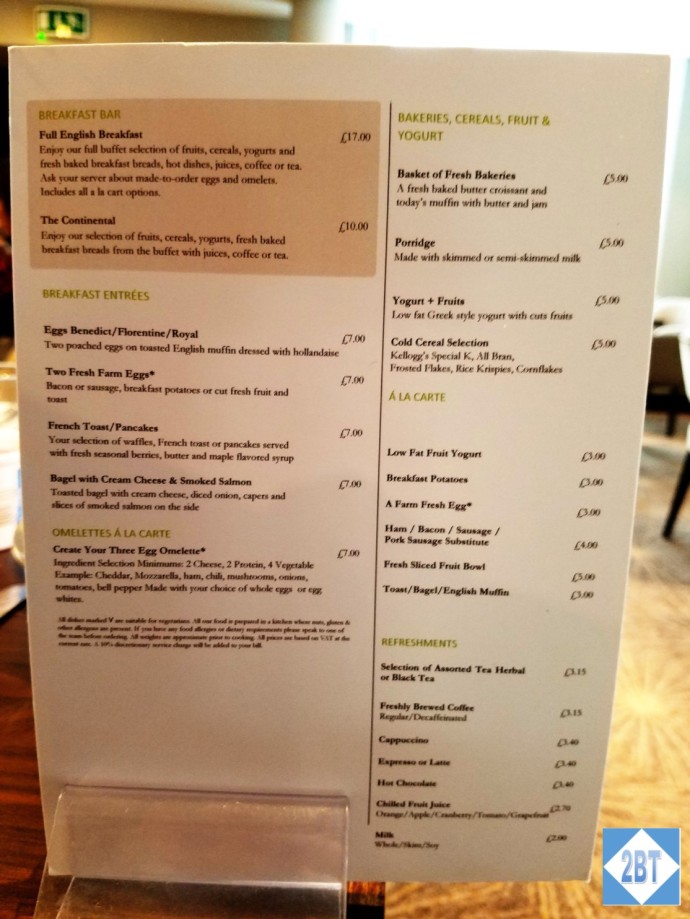 My one complaint about the place is the air conditioning. I am well aware that as an American I’m used to having the AC turned up higher than in other countries. But the temperature in my room was nearly unbearable.

When I first walked down the hall to my room I noticed it was warmer in the hall than it had been in the lobby. Not a big deal, I know hallways are often not cooled as much in Europe. My room was a bit stuffy but again, not a surprise. I had been given two keys at check-in and put one in the slot to activate the lights and AC. I didn’t stay in the room long because we were going out for dinner and were gone until quite late that night.

There was a sign above the thermostat indicating the AC would only run for 4 hours at a time, which I found extremely weird. But I think the fan ran all night long though I woke up at 4 AM in a sweat and the thermostat was blinking a message that looked like “Call Help”. Of course the windows didn’t open so there was nothing to do at that point but tough it out as I had to get up at 6 AM anyway. When I mentioned this in a Trip Advisor review I was amused/frustrated at the response of “you should have let us know, we’d have moved your room”. Well, at 4 AM that was really a non-issue. Who wanted to pack up everything then?

I would definitely be willing to stay here again though I would keep a close eye on the AC to make sure this doesn’t happen a second time.