Let me say right off the top that this is not going to be the most comprehensive hotel review I’ve ever done. We arrived in the evening and had an early morning flight out so our priority was sleep.

We took the train to the airport from the main train station and from there followed the signs to the Hilton. It’s well-marked but be aware that it is a bit of a hike and you will be going outdoors at some point. If you have a lot of luggage you may want to use a baggage cart to make your journey go faster.

As we followed the airport signs we were eventually directed to this hallway. Lit up like this it’s kinda hard to miss, right? At this point you’re still outside. 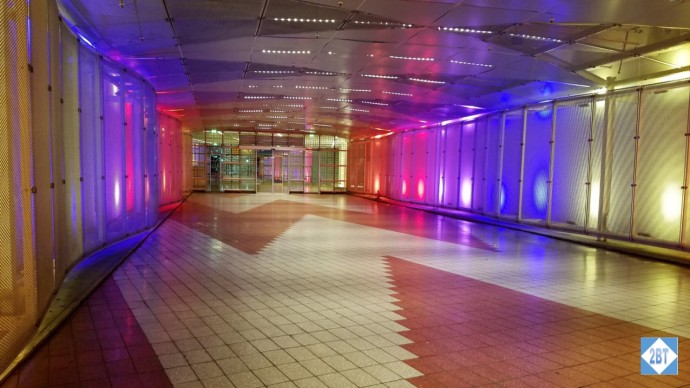 We walked through the doors at the end of this hall and the elevators to the Hilton’s main floor were on the right.

It was about 8 PM when we arrived and I seem to recall we had to wait for one person ahead of us to check in but it was very quiet on a Monday evening. We were greeted and our Gold status was recognized. The associate did tell us about breakfast but we’d be leaving too early to enjoy it.

The lobby is quite large but I failed to take any photos though have included the one below from the website. At this point of the trip I was ready to go home so I fell down on the job. There were two wings and we were fortunately given a room in the newer one. The associate indicated the elevators were to our left so we started walking that way. We came across a number of small conference rooms and thought we’d gone the wrong way when we came upon another American who let us know that we were indeed going the correct way, it was just a very long way to get to the elevator. The carpet in this section of the hotel is very thick and our large luggage pieces were quite heavy so we had to work to tug them behind us.

We eventually did find the elevator and exited on our floor. When we turned down the hall I really liked what I saw and hoped the room would live up to this. I’m a sucker for Danish modern design and I like the lighter color woods and neutrals that go with it. So you can see why I found the decor of this hall appealing. 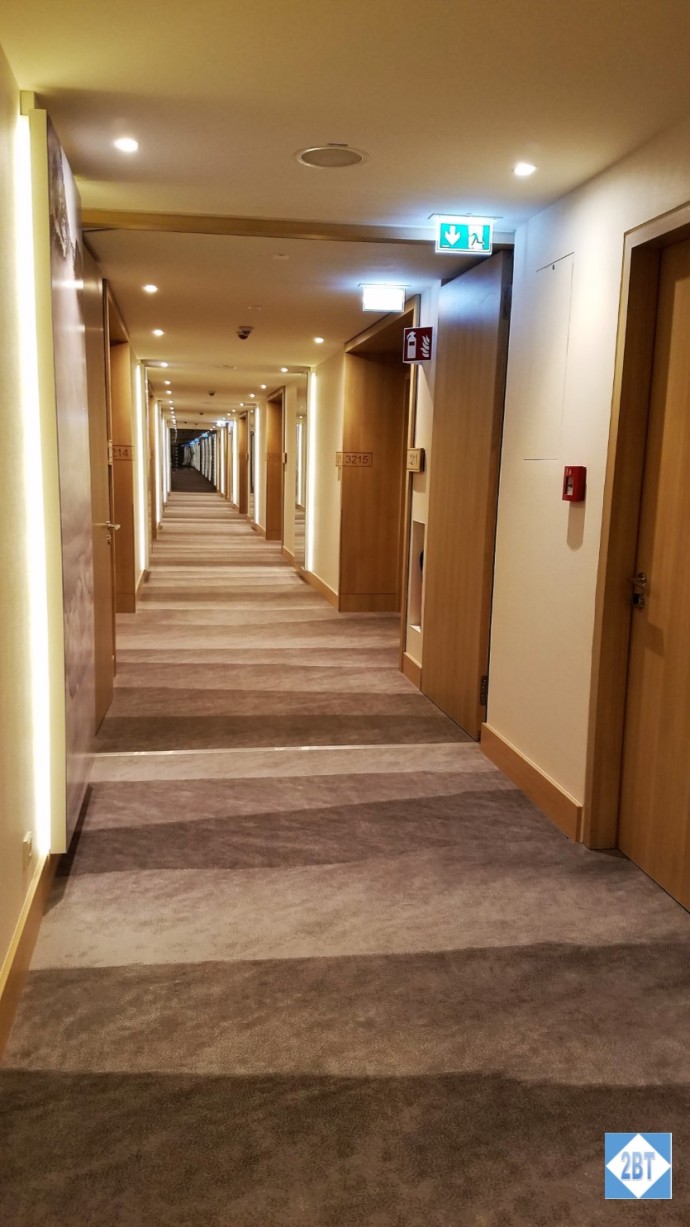 We’d chosen to pay for this room with cash and got the twin room we’d reserved. I liked that there were several outlets by each bed and that each bed had its own night stand and reading light. 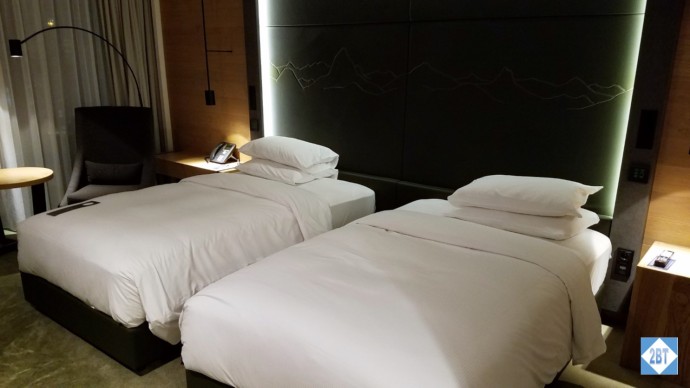 In the corner was a comfortable chair along with a small table. The view was of buildings on the airport property, not very exciting. But we were just here to sleep so that didn’t really matter.

Opposite the beds, by the window, was the desk. I didn’t try out the chair but I liked the compartment with a number of accessible outlets. 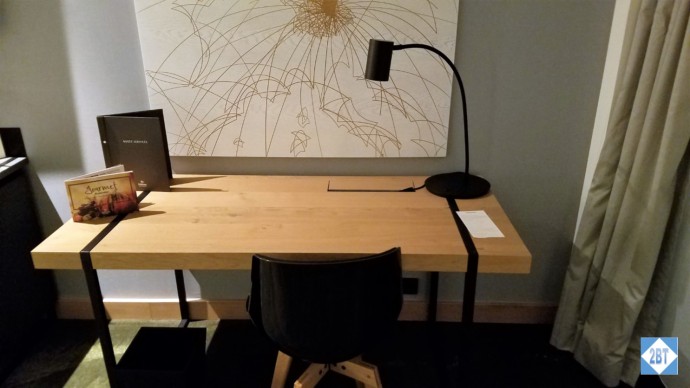 Next to that was a wall-mounted TV (that we didn’t turn on) and a cabinet. On top of the cabinet was a kettle and coffee & tea supplies along with a couple of drinking glasses. You can see from the photo that ours was a connecting room but we never heard a peep if there was anyone staying there. 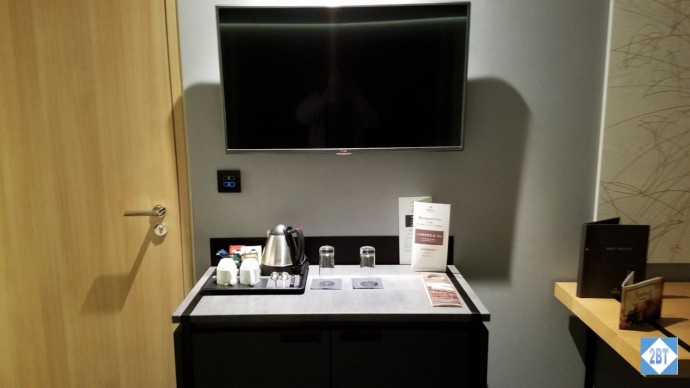 Inside the cabinet was the mini-bar and a couple of drawers. 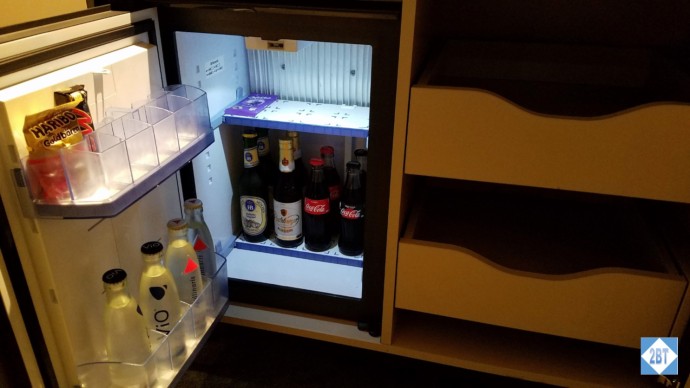 The room featured an electronic thermostat. 18C is approximately 66F but I seem to recall being warm all night. 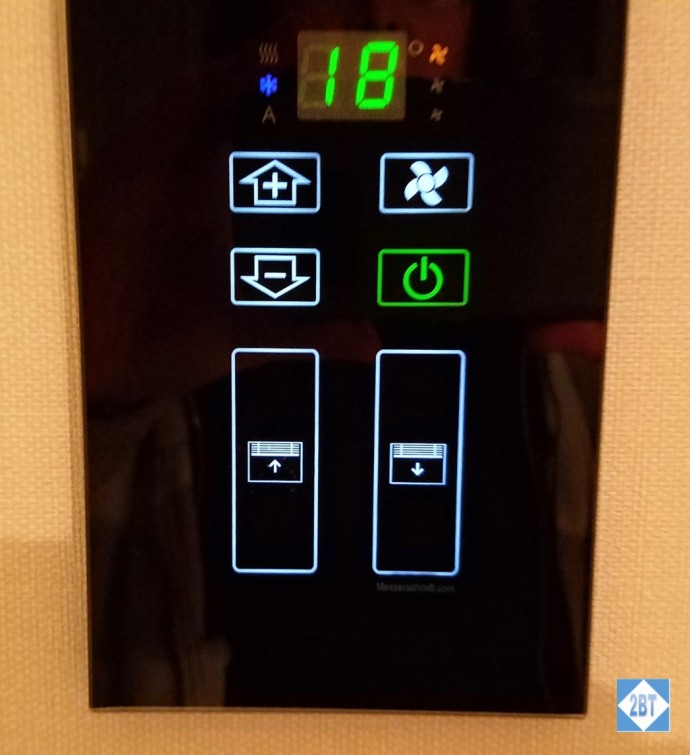 The bathroom was wider than it was long. Against the back wall was the sink in the middle of a long counter. There was plenty of room for our toiletry bags and I liked that there was also a shelf underneath for extra towels and extra storage, had we needed it. 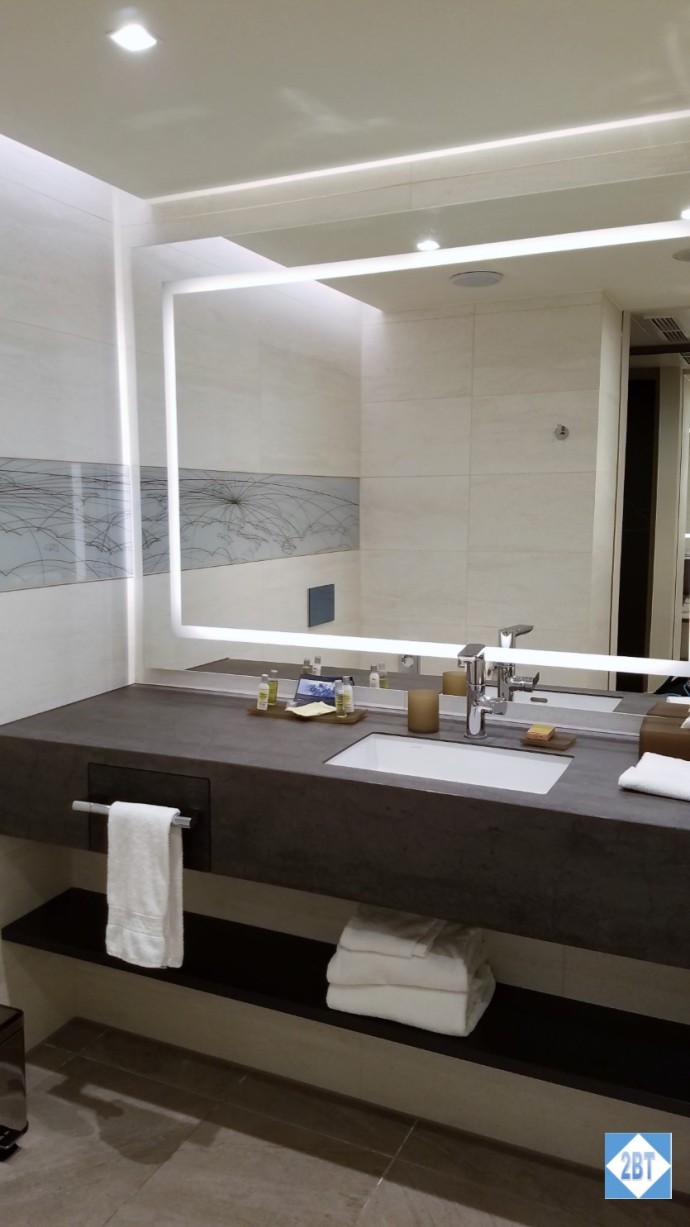 Toiletries were by Crabtree & Evelyn. 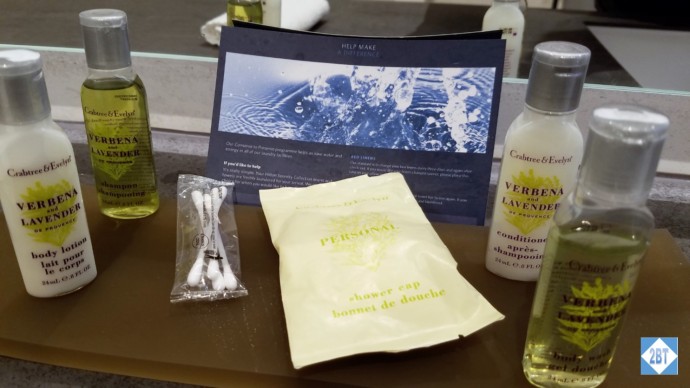 The toilet was on one side of the room. 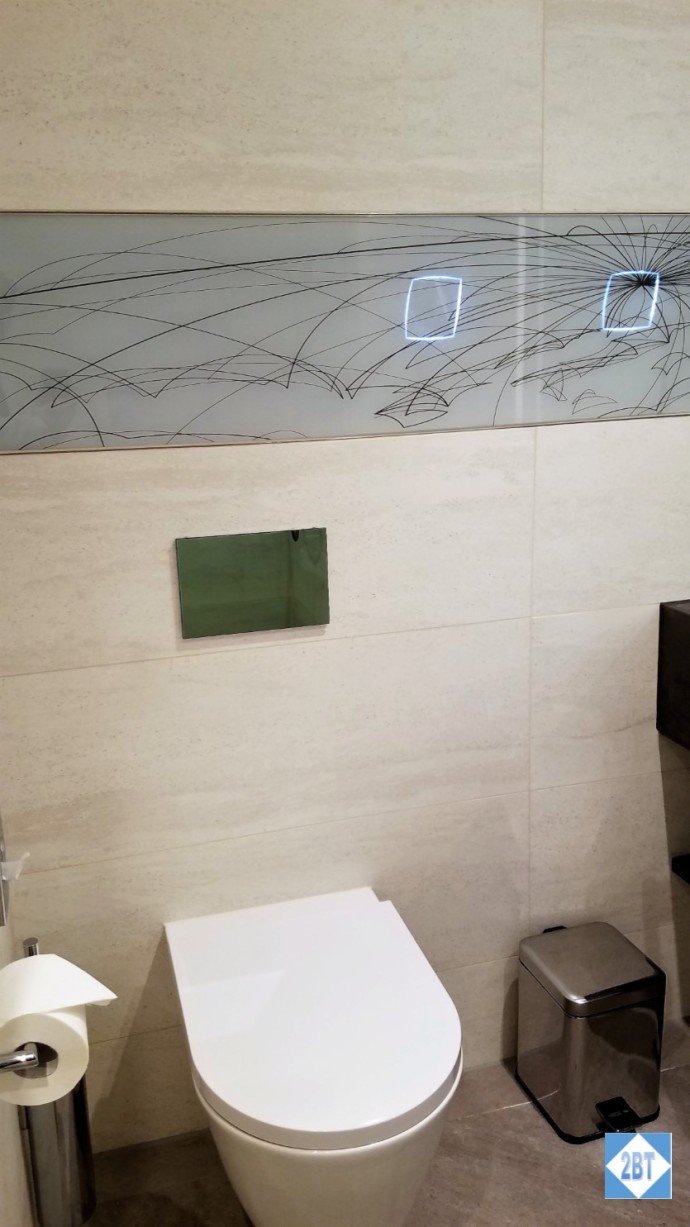 And the shower was on the other. Hooray for a fully-enclosed shower that didn’t get the bathroom floor wet. 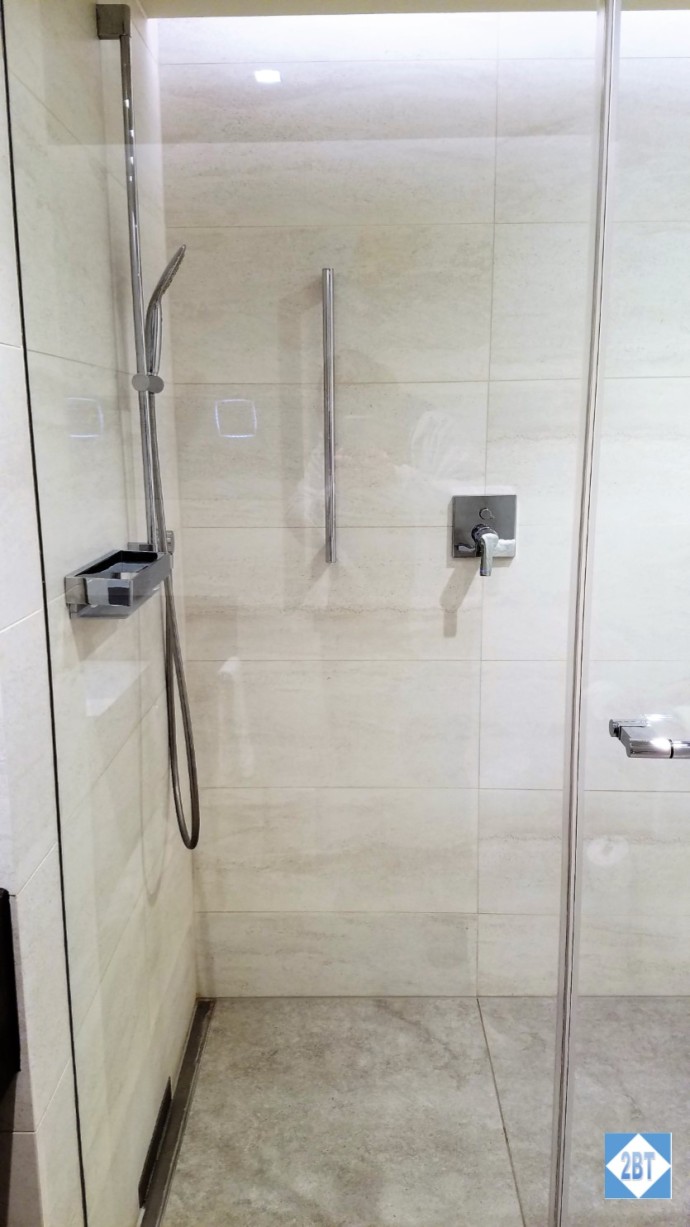 The wardrobe looks rather large from the outside but when you open it up you’ll see that half the space is taken by a set of drawers and the safe. Don’t get me wrong, those things are needed but if you’ve got two people staying here for any length of time and they need to hang items, they might find themselves with less space than they hoped. 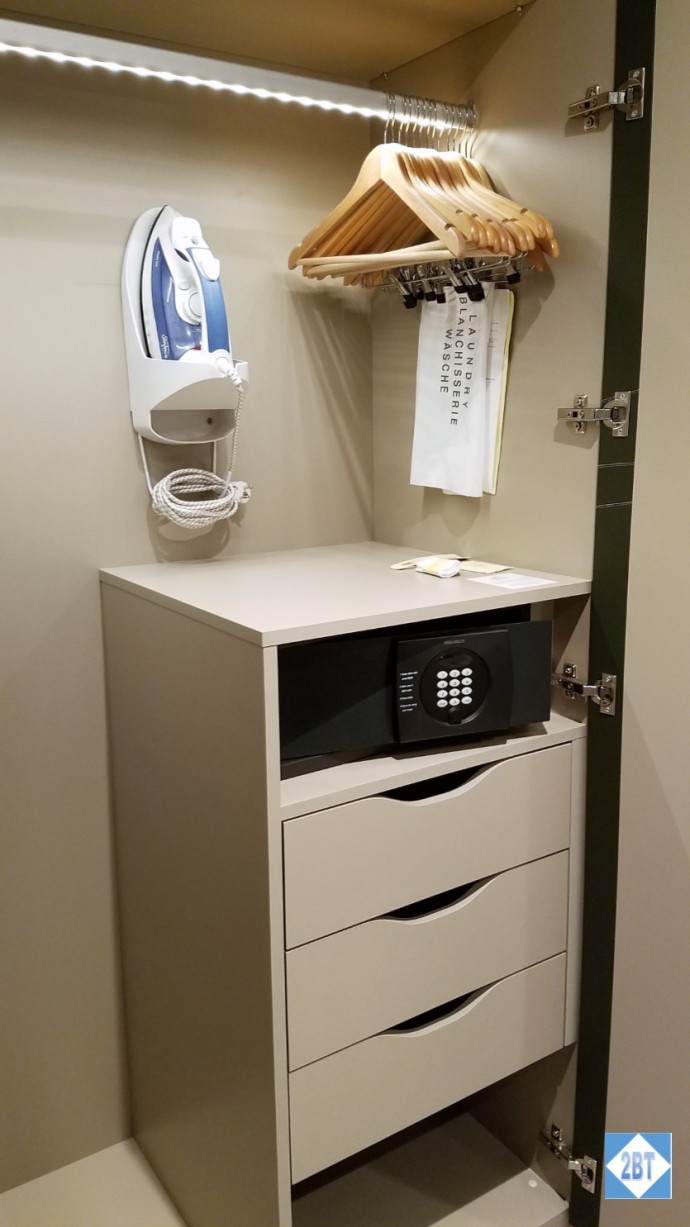 The hotel does have a spa, a 24-hour fitness center and a heated indoor pool. There’s a restaurant and a bar. However, since we had a flight at 7:30 AM the next morning I did not go looking for these amenities.

Checkout the next morning was very quick as it was about 5:15 AM and there was no line.

We got what we paid for: a clean, quiet room with two beds that was very close to the airport. Had we stayed in Munich the night before we’d have had to arisen earlier and could have been in trouble if there was an issue with the train or traffic. Staying on-site allowed us to sleep in as much as we could and was a nice way to end the vacation.