After driving literally all day, we made it back to Chicago and pulled into the Fairfield Inns & Suites Chicago O’Hare about 10 PM. We’d booked a room here anticipating that our Chicago-based friend would drop off my LA-based friend and me so she wouldn’t have to drive us back out to the airport the next day for our flights. But my LA-based friend decided to stay an extra few days visiting another friend so I had the room to myself. Once again we’d use an expiring free night certificate for our room, booking a room with two queen beds. Shortly before we departed on the road trip we called to see if we could switch to a 1 King room but they said the hotel was nearly sold out so they couldn’t make the change. We didn’t ask about it again at check-in as it really didn’t matter at that point.

Once again the front desk team member was quite friendly and cheerful despite the late hour. I was assigned a room on the fifth (top) floor. This hotel’s design is a little unusual in that the entrance is at the narrower end of the hotel’s footprint with the central hall extending straight back from there. That left more space for guest rooms, meeting rooms and other amenities, I guess. The elevator is in the center of the building and when I exited on the fifth floor I assumed my room was going to be close to the elevator. I was assigned room 520 and the sign said rooms 501-520 were to the left and 521-(whatever) were on the right. But no, room 501 was right in the middle of the building and my room was at the very end. That’s a very unusual way to number the rooms.

The hallway on the left side of the building is also unusual in that it zig-zags a bit as it winds around larger rooms. It seems the rooms on the right side of the hall are all the same size so no zig-zagging is required. Unlike many similar hotels, there’s no elevator lobby on the guest floors so the elevator opens right into the hall.

Like most hotel rooms this one had a small entry hall with the bathroom to one side before stepping past that into the bedroom area. This room does have a connecting door but if there was anyone staying there I never heard a peep from them so I’m pretty sure it was empty. The light panel in this area had two switches and I never did figure out what one of them did. 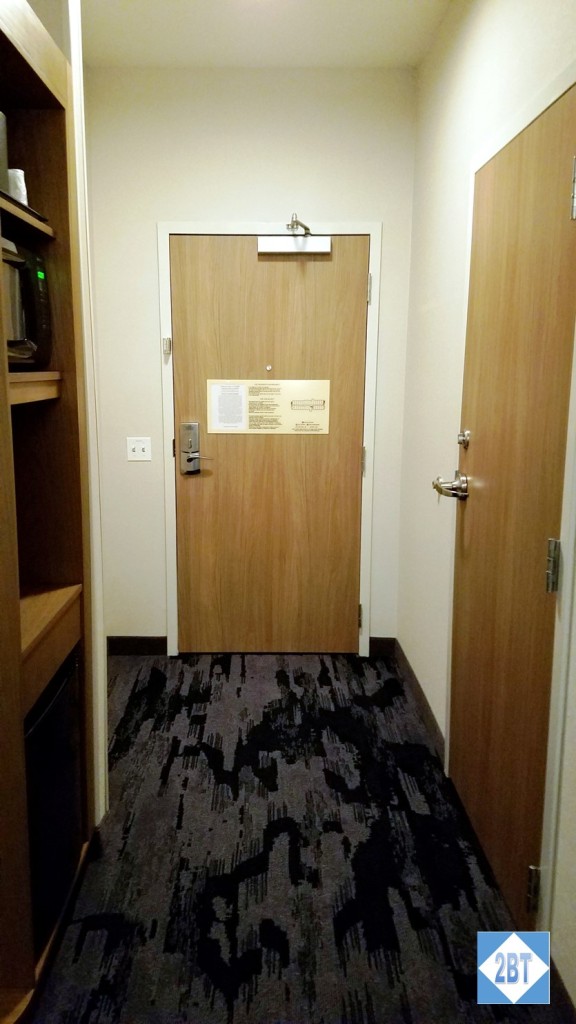 The bathroom sink and toilet were on the right-hand wall and the shower/tub was on the left side. There was ample counter space on either side of the sink, which was nice, and the shower was the best one of this trip. It had good water pressure and the shower spray could be concentrated for a very firm-feeling spray. Like at the TownePlace Suites the night before, toiletries were wall-mounted containers of Alice + Co. I was apparently the first one to use the hair dryer as it still had a couple of twist-ties on the cord. My one minor gripe was that the bathroom door would not stay open by itself. 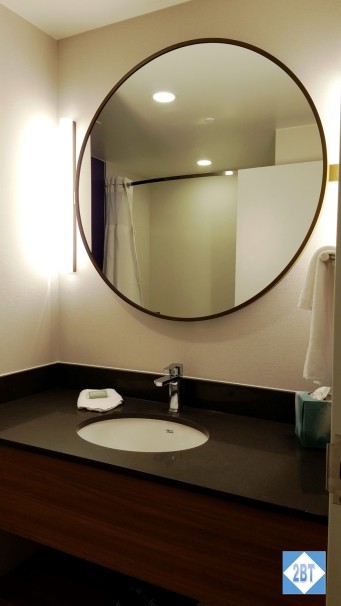 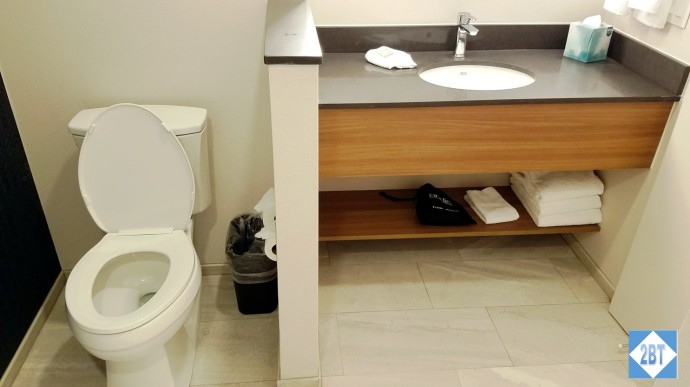 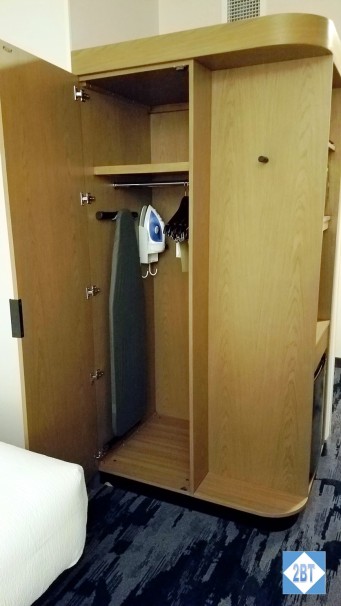 The two queen beds were perfectly fine. There was a night stand between the two beds that had ample outlets. The outside edges of the beds each had their own reading lamp, which was a nice touch. While I don’t have a full photo of it, I liked the pattern on the window scrim. It was a nice change from the usual plain white. There were blackout shades behind the scrim that kept the room nice and dark.

Since this was not a hotel set up for longer-term stays like the previous two hotels, there was no large furniture piece with drawers and lots of storage. Instead, the TV was wall-mounted over a table/desk (that had no drawers) and there was a low two-drawer cabinet that doubled as a luggage rack. There was a wide stool tucked into the corner as well.

The pool is open from 7 AM to 10 PM. I don’t have a photo because it was closed when I checked in and there were people in it the next morning. It’s a very small indoor pool but that didn’t stop the kids from enjoying it.

The gym is open 24 hours. It’s surprisingly well-equipped for such a small room.

Breakfast is free to all guests and is served from 7 to 9:30 AM on Sundays. I slept in and did not make it downstairs until about 9 AM and many items were running low despite staff doing their best to keep refreshing items. There were quite a few tables as well as a high-top counter barstools. The bar is in this same area though it was not open when I arrived at 10 PM on a Saturday so I’d have to think it’s a “special occasions-only” kind of thing but is not open every night.

Breakfast Seating. The food area was a bit chaotic so I didn’t take photos.

There is a computer and printer available for guests. It’s located on the ground floor near the elevators and across from the pool. 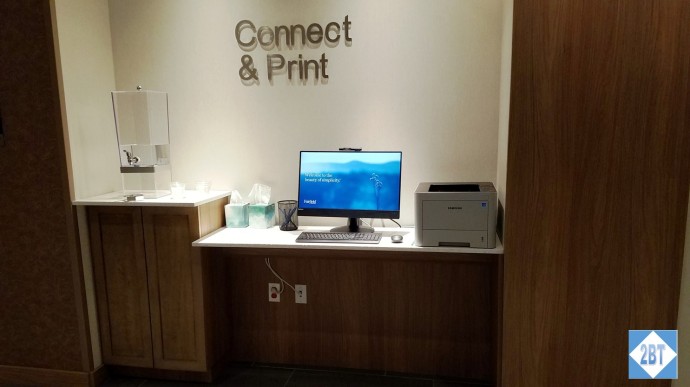 The lobby is light and airy in the day with large windows. There’s one table that seats six people, another that seats four and a sofa with smaller seats that face the TV. This seating also acts as overflow seating for the breakfast service.

Lobby Seating. Front Desk is to the right.

The mini-mart is just to the right of the front desk. 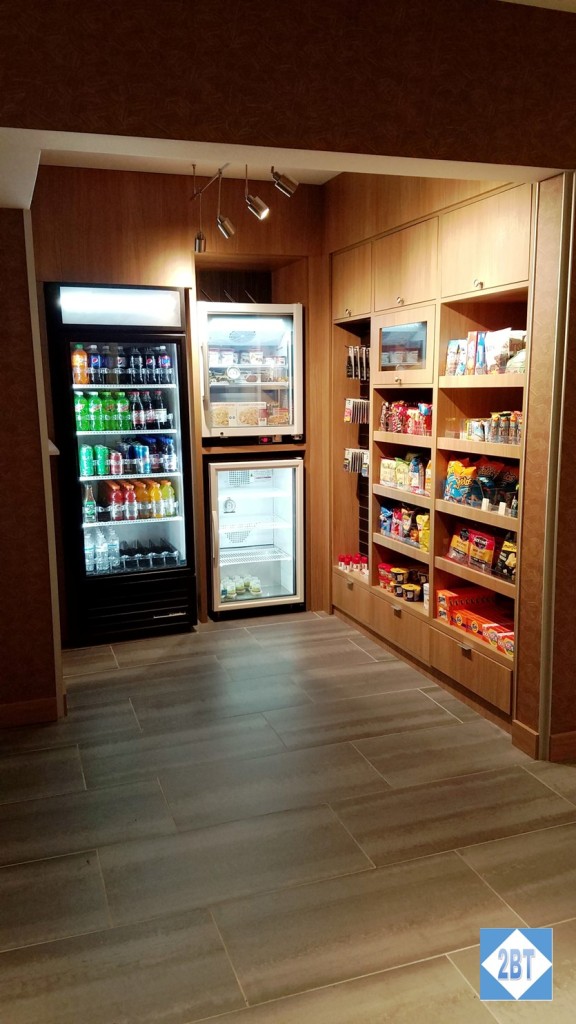 The hotel does have a free shuttle service to O’Hare that runs approximately every thirty minutes at the top and bottom of each hour. This is a shared service with another Marriott property.  I think it’s the Residence Inn but can’t remember for sure. Unlike some other area hotels, this one does not offer a park ‘n fly option where you can stay the night before your trip and leave your car here the whole time you’re gone.

This property checked all the boxes for me that I needed for this trip: a clean, comfortable place to sleep, free breakfast and an airport shuttle. Not the best value one could get for a free night certificate but it sure was better than letting it go to waste! I’d be fine with staying here again if the need arose.