I had arrived in Chicago in the morning and spent the day with friends before returning to the airport that evening. My friend dropped me off at O’Hare around 6:15 PM in advance of my 9:10 PM flight. I was excited to be able to spend some time in the relatively new Polaris lounge before my flight.

The lounge entrance is just to the left of the escalators when entering Concourse C from Concourse B/Terminal 1 check-in. There is a first checkpoint where it is verified that you’re entitled to enter the lounge. Then walk through these double doors followed by a left turn into the lounge. 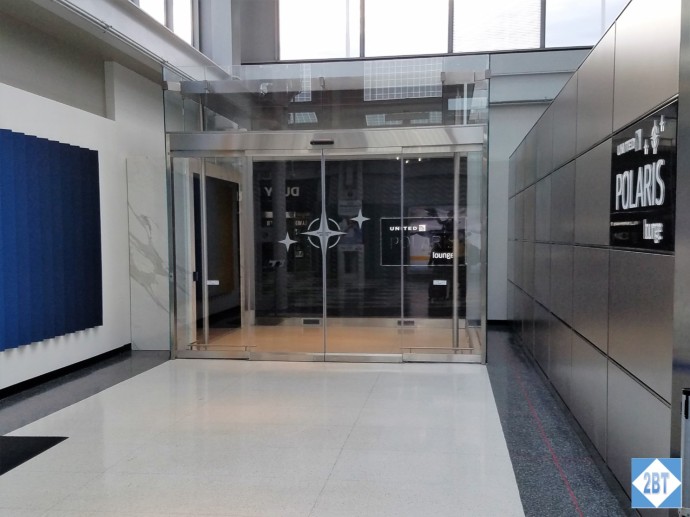 My boarding pass was scanned at the desk on the right and I continued on into the lounge itself before turning back to take another photo. 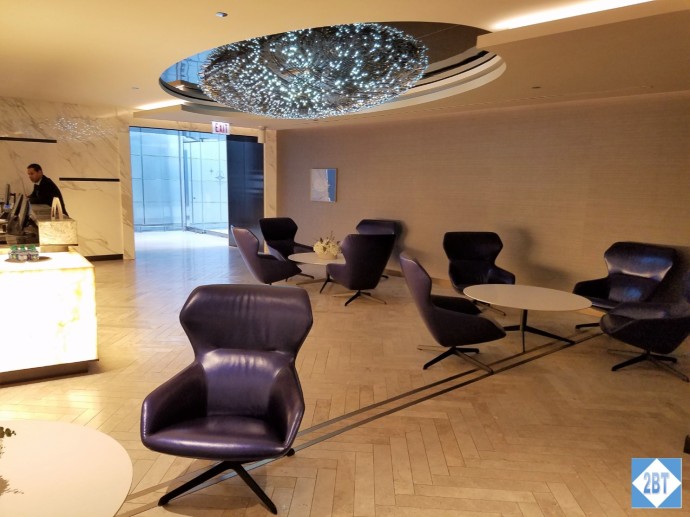 My colleague was due to arrive around 7 PM so while I waited for her one of the associates in the lounge showed me around, which I appreciated.

There were a number of different seating configurations including some very private cubes, some half-booths and other open seating. There were lots of outlets (both electric and USB) available which should be expected from a new facility but it was still great to see. 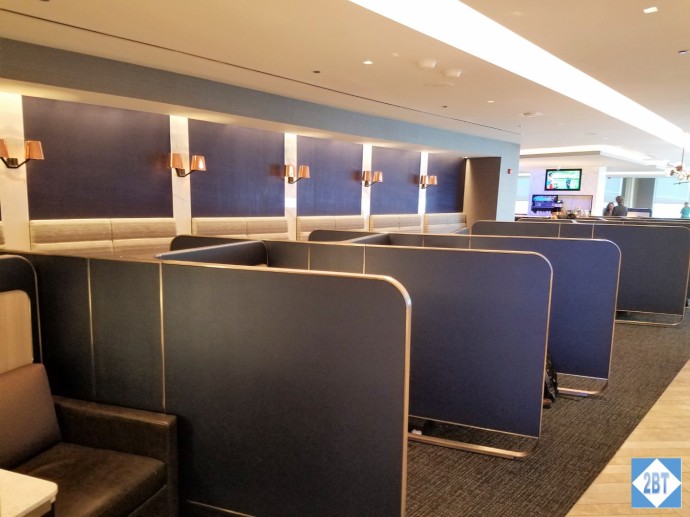 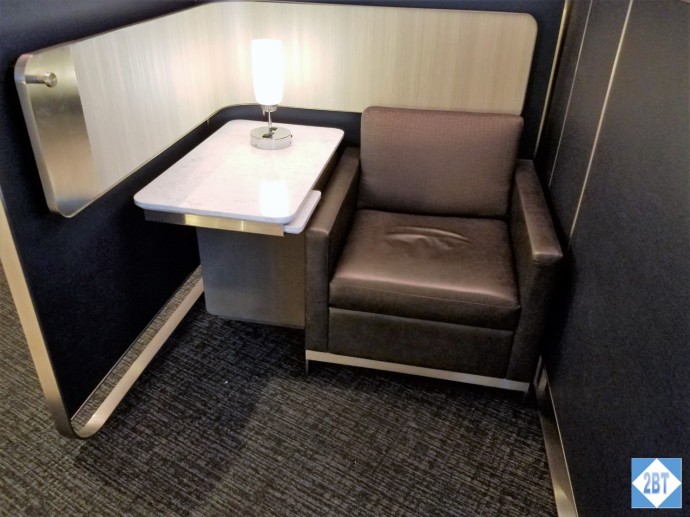 One of the private seating areas 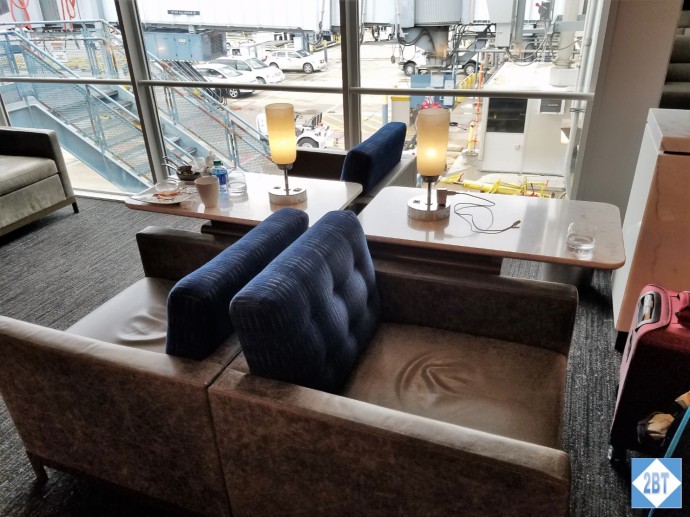 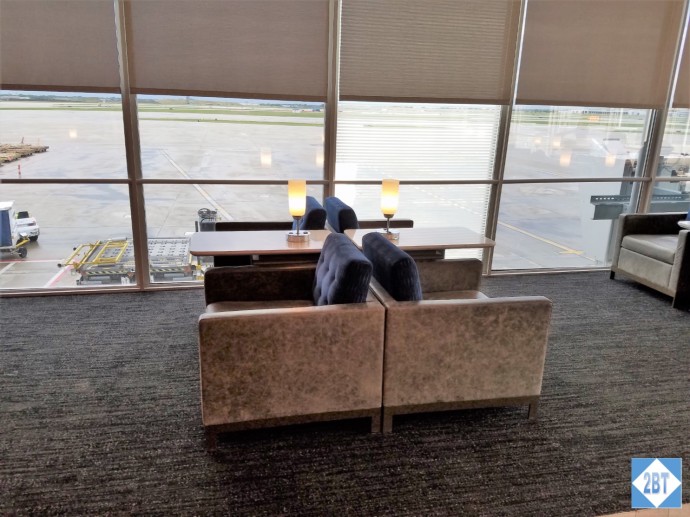 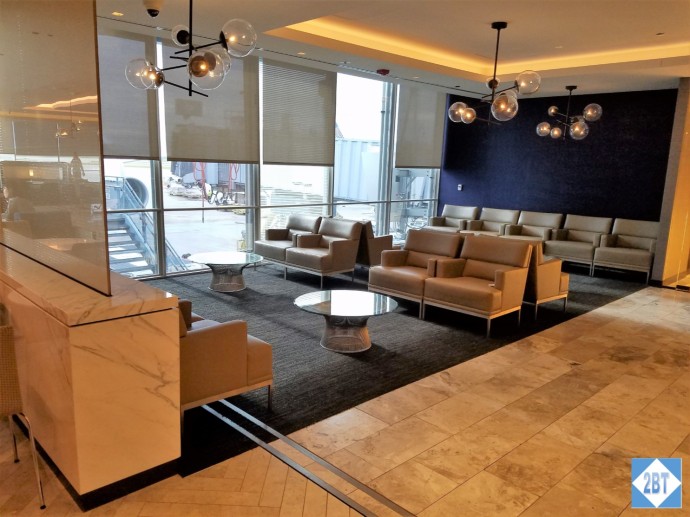 Group Seating Area Near the Buffet 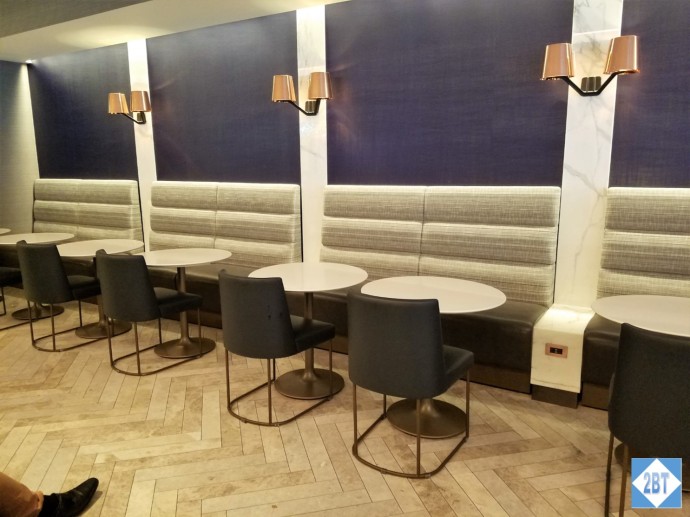 The hydration station had water and other cool beverages at one end with coffee and tea at the other. A small fridge underneath had canned soft drinks. 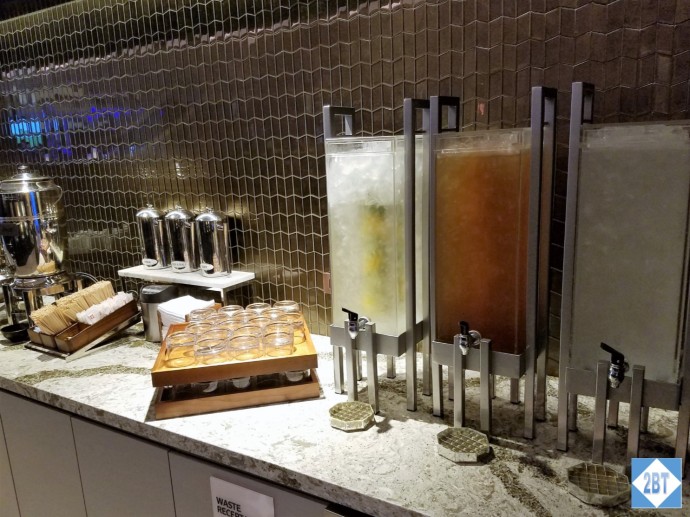 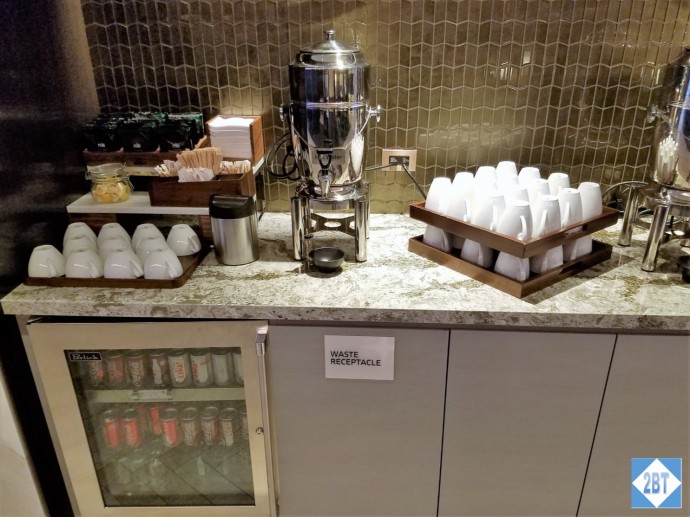 A small buffet was set up with skillet dishes like pasta, a really good salmon teriyaki, shepherd’s pie and other goodies. Off to the side were the pastries and desserts. Along the back wall were the canapes. 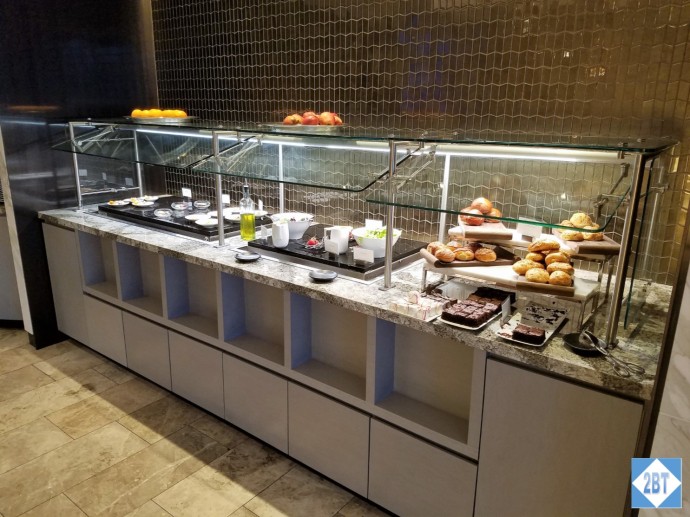 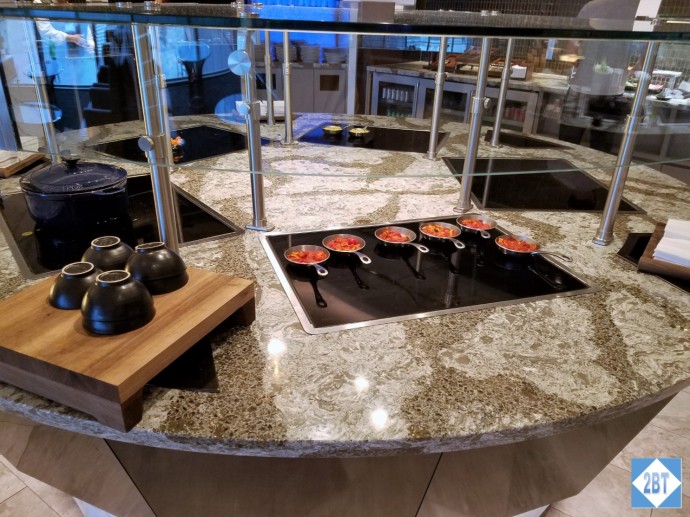 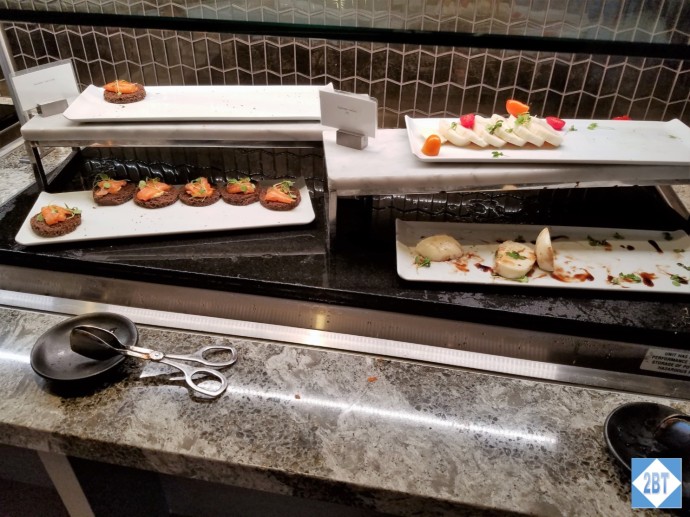 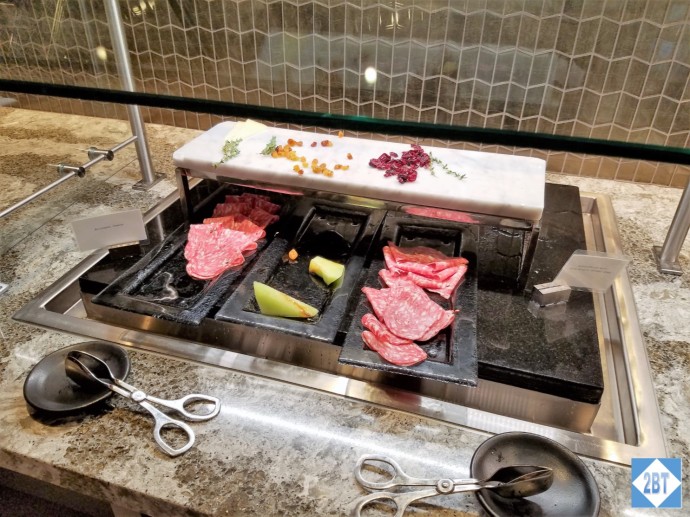 This is the only United Club in O’Hare with shower and rest facilities. The day bed rooms do not have doors but are all behind a single closed door and can be made quite dark. 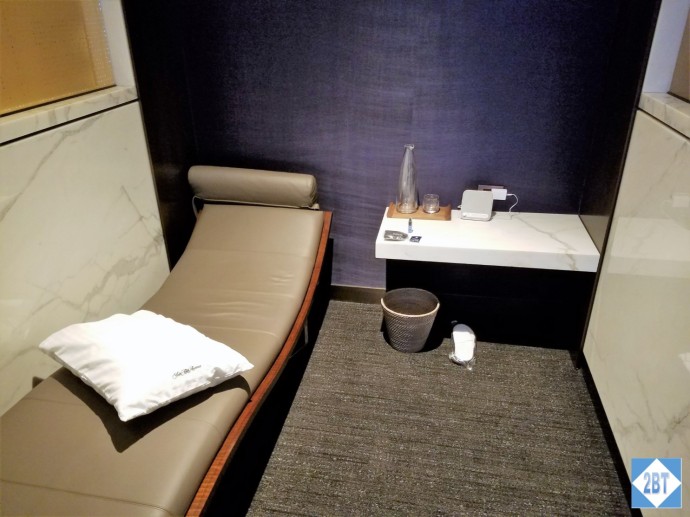 The shower facilities looked to be in great shape and would be great to use during a long layover. 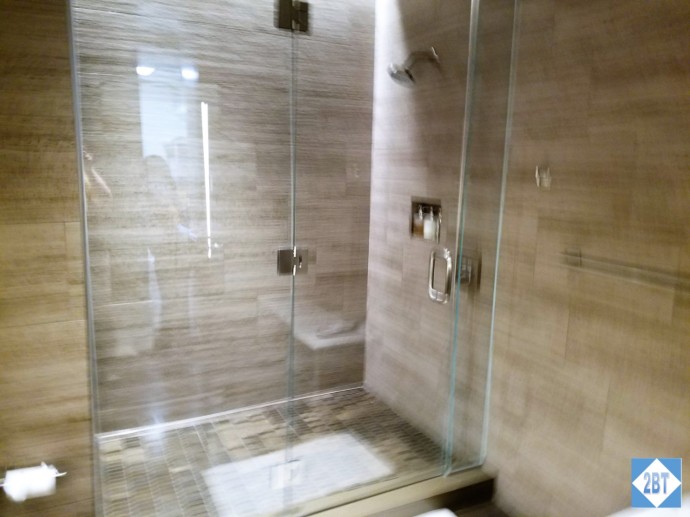 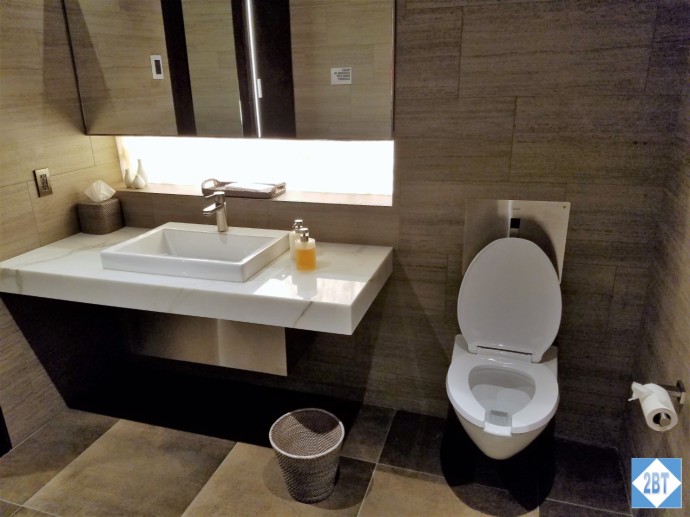 There were a number of tables set aside for dining. I was waiting for my colleague to arrive in hopes that we could eat together but she arrived a bit later than expected and she was only able to eat half of her hamburger while I only had one of the two fried chicken breasts. It was good, if a bit dry, but I would have enjoyed some cole slaw or something besides the “Southern greens” that were served with it. In fairness, mine was the last of that dinner available and we were told there were only two additional chicken sandwiches as it was after 8 PM by that point. 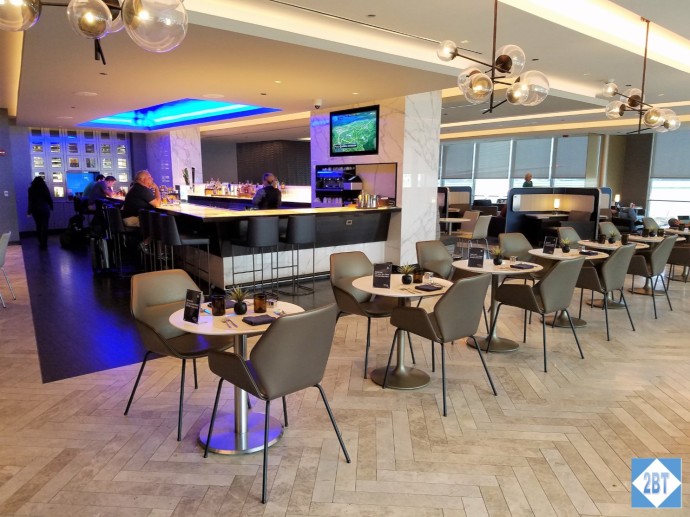 The bar area and tables reserved for dining

Instead of separate men’s & women’s restrooms, there were a number of unisex bathrooms which were quite large and I liked the concept. 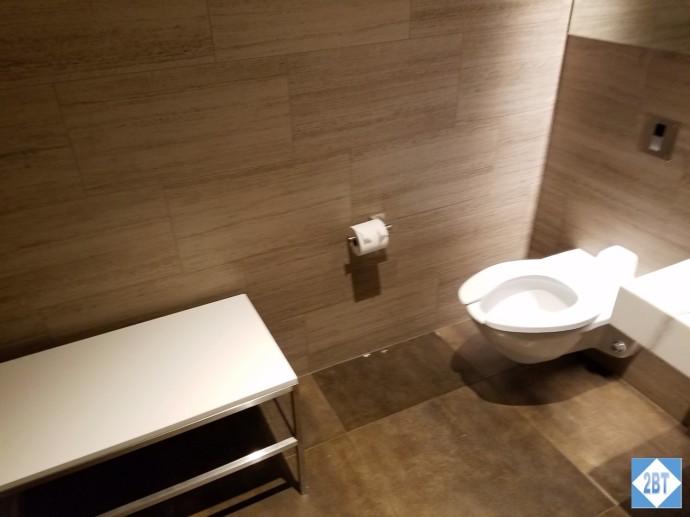 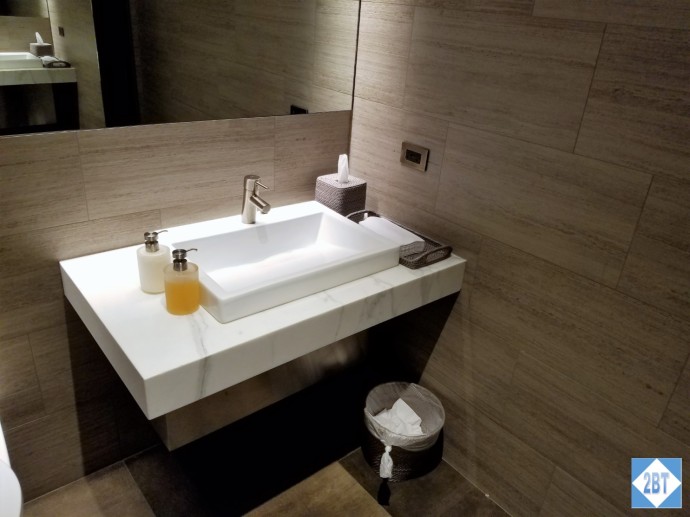 On a Saturday evening, the club was busy but not overflowing.

On my return flight I stopped in again on a Friday afternoon and the club was a lot more crowded, as is probably to be expected. I’ve recently read that the plan is to expand the club next door, into the space formerly occupied by the United Club. The extra space will definitely be welcome.

Hopefully I get to visit this lounge again and take advantage of the pre-flight dining so I can go straight to sleep on my late evening flight. I look forward to the opportunity as this is the nicest lounge I’ve visited in the US.