One perq of holding the Marriott credit card from Chase is that each year you pay the monthly fee you get a certificate good for one night at a Category 1-5 hotel. I had a certificate that was due to expire in October, when the annual fee is due, and the stay must be completed by that date, not just booked. That’s one thing I’d like to see changed with the Marriott-SPG merger – let me book the certificate within the date range, even if the stay is not completed by then.

Since the annual fee of the “regular” Marriott card is $85 (moving to $95 with the next renewal), you can sometimes get great value from using a certificate. The Fairfield Inn and Suites in Kenner is not an especially great use of this certificate as rooms are just over $100 pre-tax but since the certificate would otherwise be going to waste it just made sense to spend it here. This is also the only Marriott property in the immediate airport area and thus the only one with an airport shuttle.

After touring all day in the sticky heat and being caught in a rainstorm just 2.5 blocks from the Hyatt House, we were fairly drenched by the time we caught our Uber to the Fairfield Inn, arriving in the late afternoon.

While we didn’t spend a lot of time inspecting the exterior it looked to be in good shape and we made our way to the front desk. We were assisted by a very friendly associate who noted our status and that we were staying on an award. She filled us in about breakfast though we’d be leaving too early for the buffet. She did arrange for us to have sack breakfasts available for the next morning and got us booked on the appropriate shuttle.

The lobby looked as if it had been recently refreshed and I liked the furniture and the geometric designs on the carpet. Though the breakfast area was not in use I liked the layout and the bright colors of the seats.

A quick note that this hotel is in the flight path for the airport but flights are typically operating in the 0530-2130 timeframe so there shouldn’t be an issue with plane noise overnight.

The two wings of the hotel are offset a bit so upon exiting the elevator we turned left on the short connecting hallway and then left again on the longer hallway with guest rooms.

Hallway upon exiting the elevator

Hallway to the guest rooms

The room was laid out in typical hotel room fashion: bathroom immediately on the right and then the beds just beyond. We’d booked a room with two queen beds. There was an easy chair in the far corner and a desk with a rolling chair just opposite of that. The a/c was just below the window and did have a thermostat built in, thankfully. I hate it when all the units have are “low cool” or “high cool” so at least we could set the unit to a specific temperature. We did have an issue with the a/c unit in that the plastic housing was cracked a bit and we had to have maintenance come tape it down because otherwise the rattling would have kept my roommate awake. 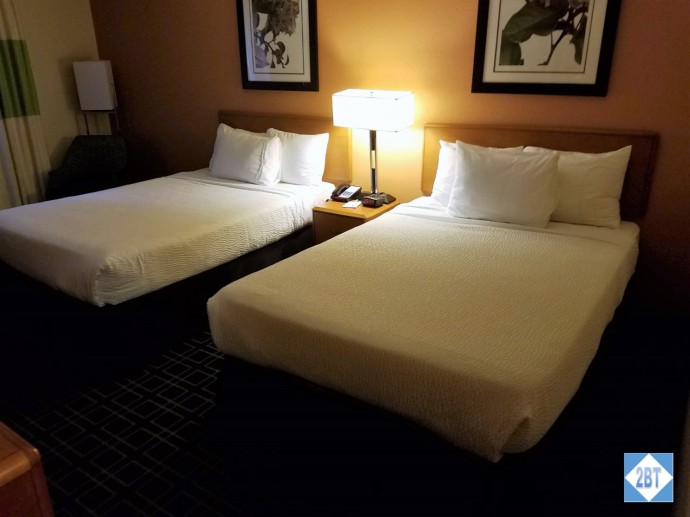 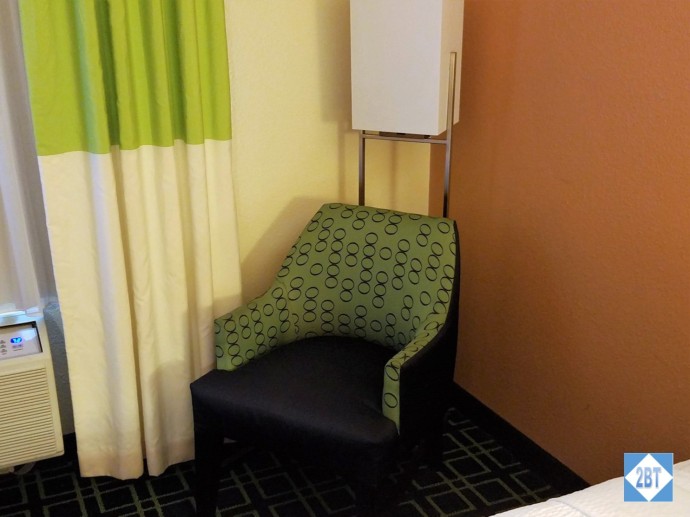 Across from the beds was a four-drawer chest that doubled as a stand for both the TV and the coffee pot, though we did not use any of these. I did use the microwave to heat up a snack I got from the market beside the front desk and it worked just fine. The mini-fridge kept our drinks cold enough. 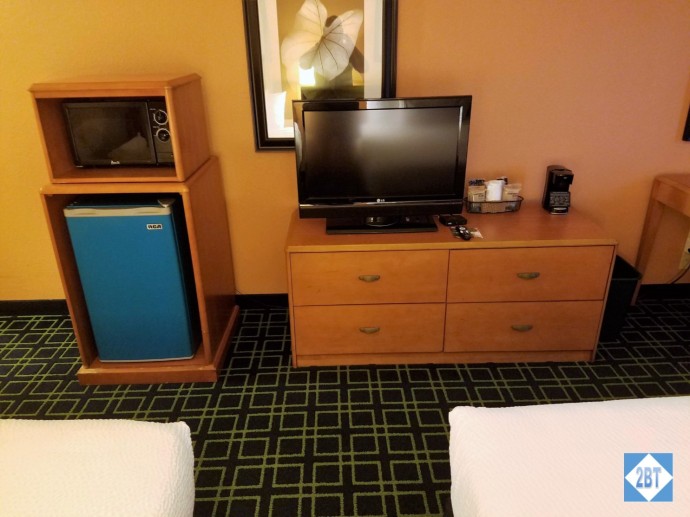 The bathroom had the sink separated from the room with the toilet and the tub shower. Paul Mitchell toiletries were provided. Across from the sink was the closet.

The actual bathroom did not feel cramped as there was a fair amount of space between the toilet and the tub. I liked the brightly colored shower curtain and the shower head that allowed the spray to be adjusted. I didn’t like the fact that the tub drained VERY slowly. It was a good five minutes after turning the water off that the water finally finished draining. We reported this to the front desk but did not ask that they do anything about it since those were the only showers we’d be taking. They did offer to move us to a different room but at that point it didn’t matter. 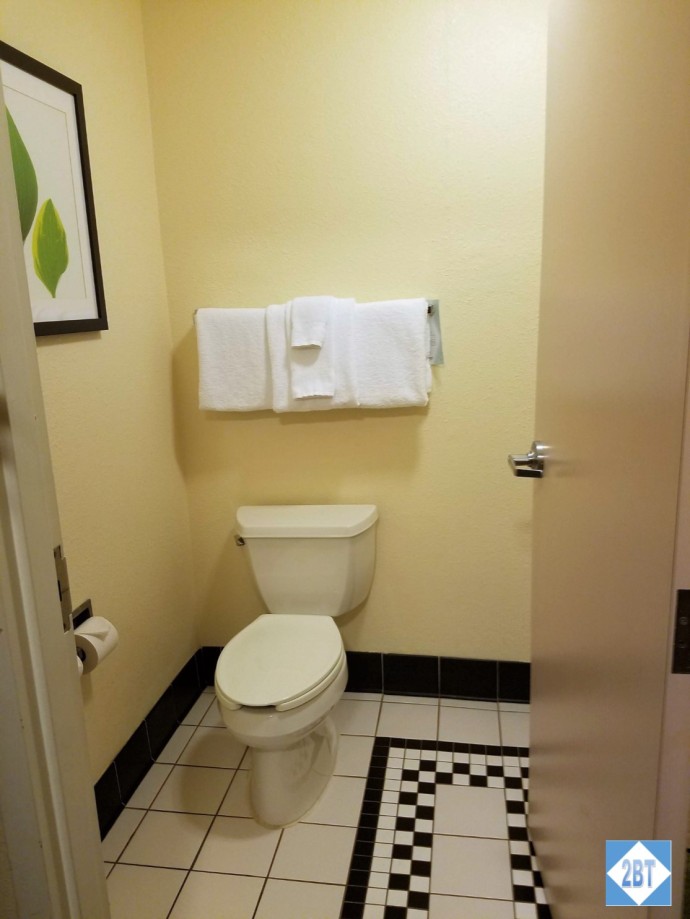 One more unhappy surprise is that the hair dryer was both visibly broken and the handle was covered in something sticky. In fairness to the housekeeping staff the hair dryer is stored in a cloth bag so it’s not sitting out for them to see but after the cracked a/c plastic and the slow-draining tub we were beginning to have our doubts about this hotel. I will say that the maintenance man – along with everyone else we dealt with – was just terrific and if it hadn’t been for the employees my perception of this hotel would be much worse.

When we got into our beds for the night we discovered just how soft they were. It was definitely time for those mattresses to be refreshed.

As I mentioned the lobby and dining area looked nice. The little market near the front desk had a decent, but not great, selection. We had eaten a very late lunch and weren’t all that hungry but I had to have a little snack and after all our issues they didn’t even charge me for it. 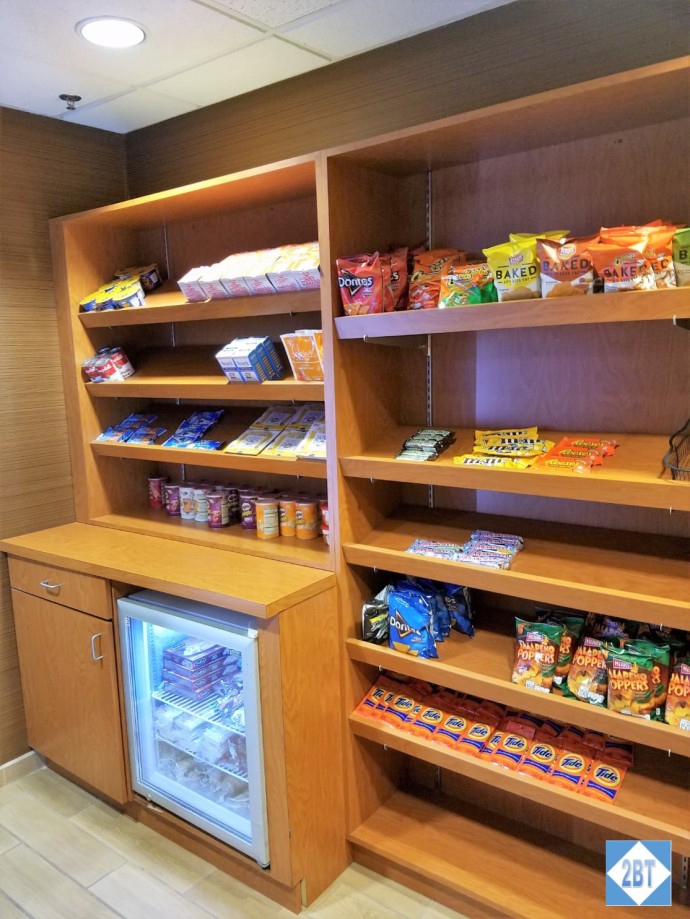 In the lobby is a public-use computer and printer.

There is a very small pool and it includes an assisted lift for those who can’t easily get into the water themselves. 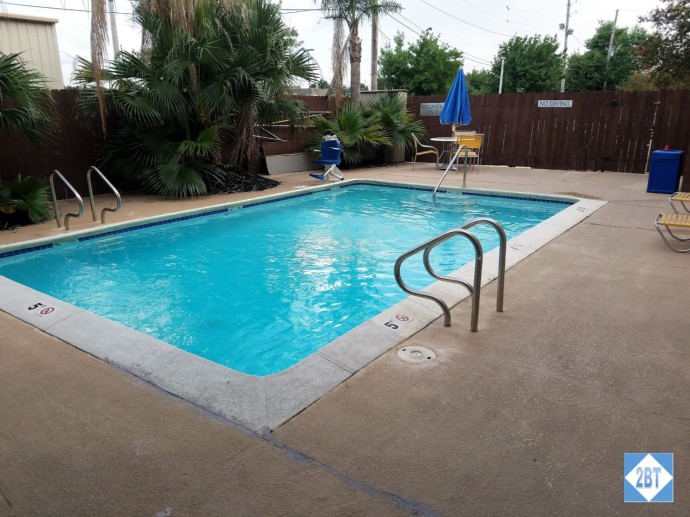 There’s also a small gym with three cardio machines, a bench and some hand weights. Towels and a water station are provided too. 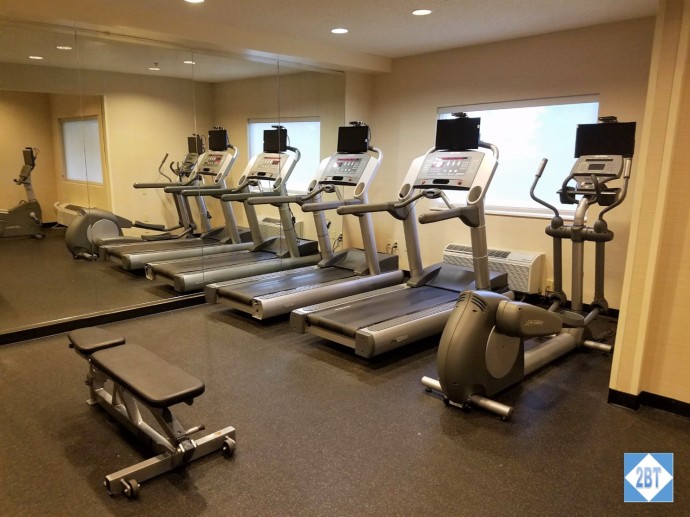 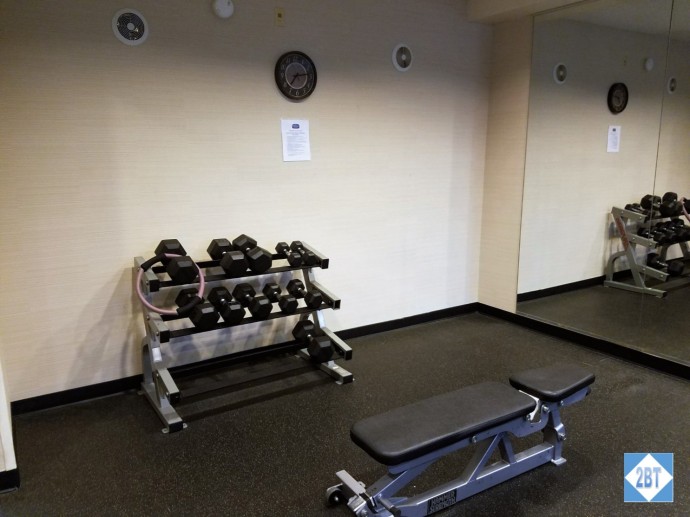 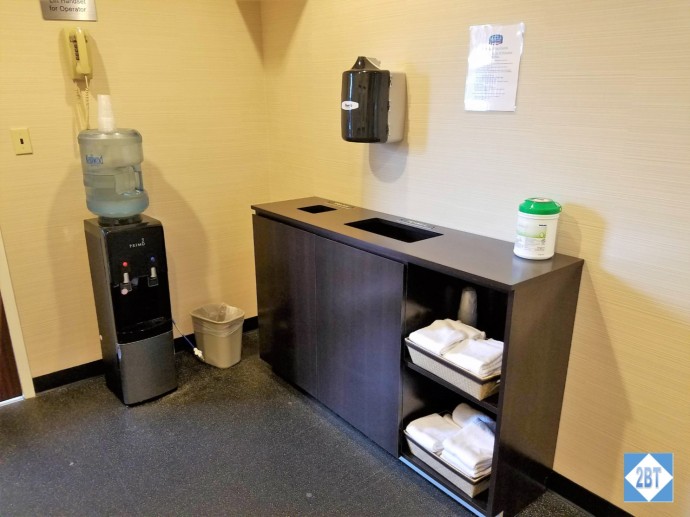 I saw a self-service laundry facility but for some reason my key didn’t open the door so I couldn’t photograph it.

A sack breakfast was provided but I wish a little more thought had been given to its contents. On the surface, an orange, some Greek yogurt and a bottle of water would seem nice and healthy. But the orange is extremely messy and neither the Greek yogurt nor the water can go through security. While I could empty the bottle and refill it airside, I ended up ditching the orange and eating the yogurt before I went through security because we had enough time to do so. My friend cannot eat dairy items so her breakfast was useless to her.

We caught the 5:30 AM shuttle to the airport for our flights that departed in the 7:00-7:30 time frame. I was a little surprised at how busy the airport was that time of morning on a Tuesday. It seemed to be mostly leisure travelers.

The people were terrific. They were genuinely dismayed at the issues we reported and did their best to make things right, which we greatly appreciated. But the guest rooms need some TLC. Maybe they’re not all like the one we stayed in – I hope not – but some upgrades do need to occur.