I was back in Big Sky, Montana recently. It’s one of my favorite resorts because I love the slopes and (shh!) there are never any liftlines. They’re in the midst of a multi-year, multi-million dollar project performing upgrades all over the mountain. This year saw the addition of North America’s first 8-seat chairlift (complete with a bubble and heated seats!) and in coming years the ancient beginner lift will be replaced with a gondola that will service both beginner slopes as well as bowl skiing for advanced skiers.

In the recent past our ski club has stayed at The Summit, which is a high-rise condo right at the base of the slopes. But two years ago the property began the process of upgrading from a 4-star property to a 5-star. Though it’s only a 4.5-star at the moment, that was enough to push the pricing out of our club’s budget. I really hate that because it’s so convenient and has the best hot tub on the mountain.

So this year our club stayed at the original base lodging facility, The Huntley Lodge. Named after resort co-founder Chet Huntley (he of NBC News fame from the 1960s & 1970s; look it up, kids) it’s a 3-story hotel with half the rooms facing the slopes. Rooms in one wing are mere steps from the beginner Explorer lift while rooms in the other have the mountain village right outside the door at the end of the hall. For convenience, it’s really hard to beat.

While I have stayed here before, it had been at least 20 years so I was curious to see what had changed. The answer: not a whole lot, which is actually a good thing for the most part.

The lobby is not huge but has a fair amount of seating and, like all the common areas, has a mountain theme to the decor. I especially liked the old skiing items mounted up high. 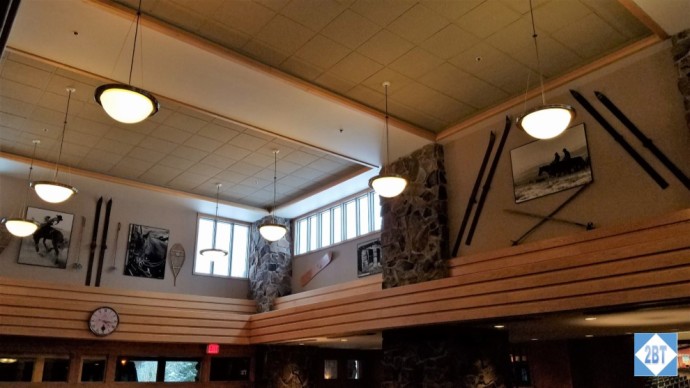 The dominating feature is The Bear. If you ever need a meeting point, it’s a great landmark. 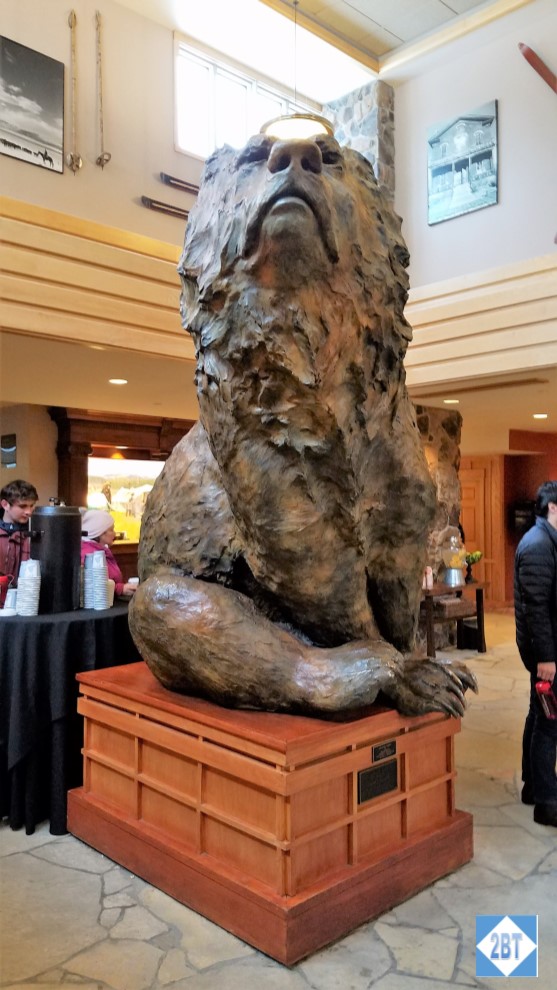 We checked in at the front desk and unlike many places we stay, my roommate and I had to check in separately and each provide a credit card. I would assume/hope that married couples didn’t have to do this but I don’t know for sure. The front desk was quite efficient, knew we were coming and had our packets prepared but with nearly 30 people checking in at the same time it took a little while. 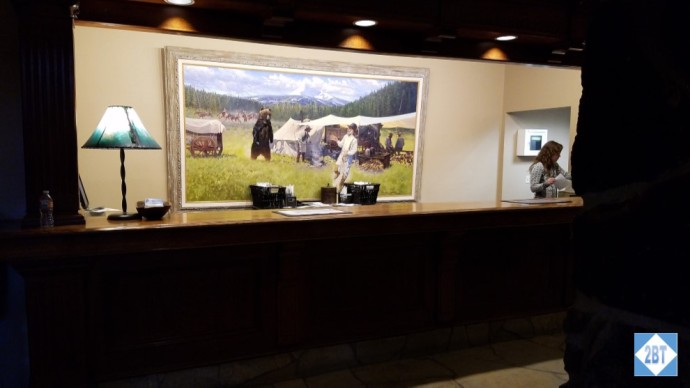 The entrance to the Solace Spa and Salon is also located in the lobby. I had an excellent massage here one day. It was great to make my aching legs feel better after those first few ski days. 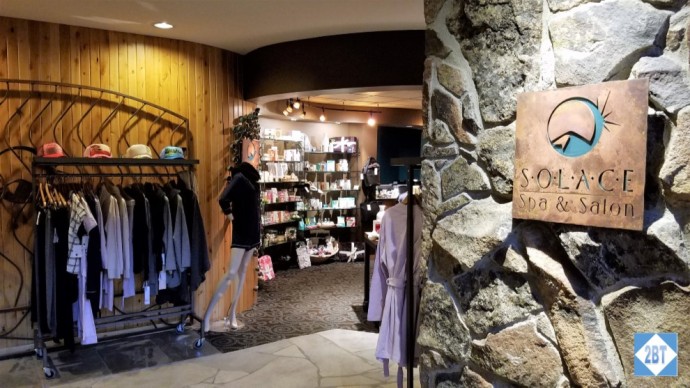 The Firehole Lounge is across from the spa. It’s a small but relaxing place to enjoy a fire and a drink. 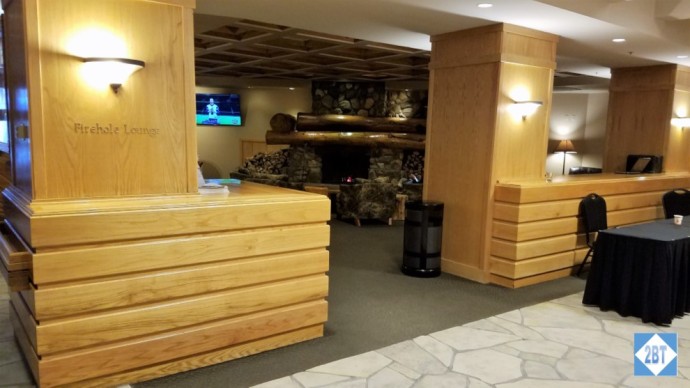 Firehole Lounge at the Huntley Lodge

To reach the guest rooms, walk up a set of steps and down this hallway to the left of the reception desk. 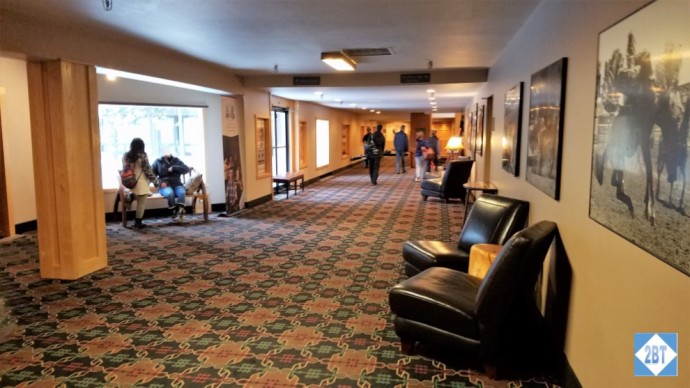 Hallway leading back to the back of the lodge

At the end of the hall are a couple of smaller conference rooms, a sunken area with sofas in front of a fireplace, a small store, the elevators and the vending area. Guest rooms are down hallways either to the left or the right. This area is also where you’ll find Chet’s the main restaurant and bar. Many room rates include breakfast and unless you’re just not a breakfast eater you’ll want to have the buffet breakfast. Lots of choices including cooked-to-order omelets are available. 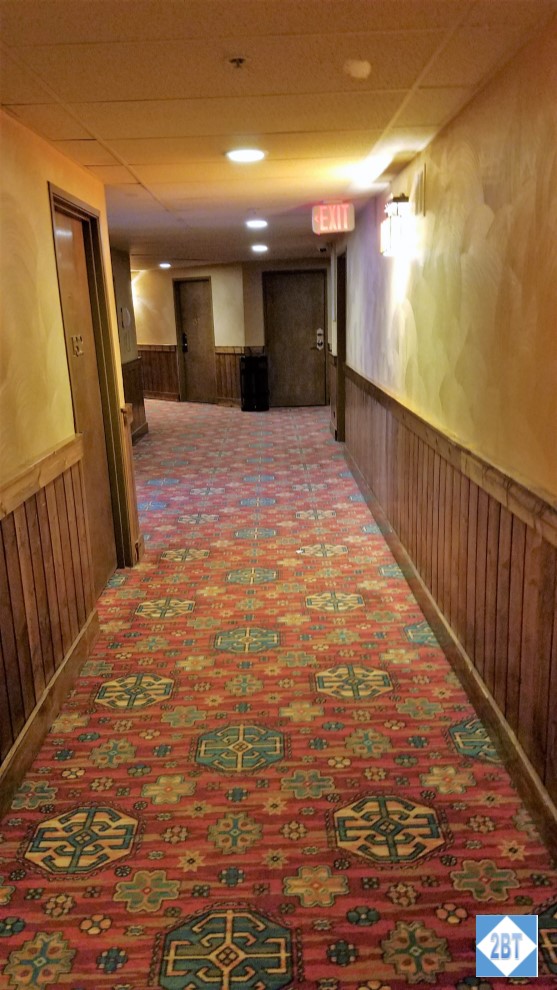 We received a standard room with 2 queen beds. I found it a little odd that even our married couples got 2 queens but perhaps they don’t have a lot of rooms king beds.  There was only one nightstand between the two beds but not only was it pulled out just far enough to make one of the outlets behind it easily accessible, the alarm clock also had outlets and USB ports in it.  Hooray for making it easy to have my charging devices handy overnight! 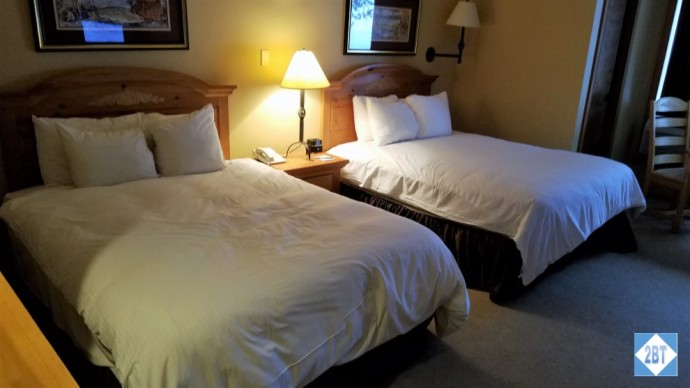 As we were on the ground floor we also had a very small patio. It’s so small I’m not sure what good it is as you might be able to put one chair out there but that’s about it. 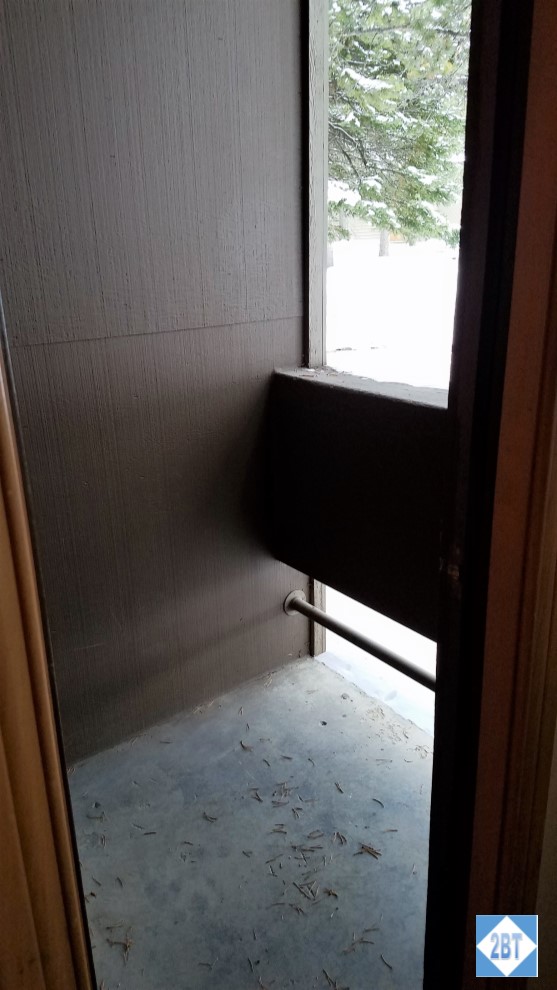 In front of the window was a nice-sized table. As both my roommate and I had our laptops, this space came in handy. The chairs were nice and firm and were a good place to sit while putting on/taking off ski boots. I assume the bench along the wall was really intended for that purpose and it might have worked for me except that the cushion was very soft, making me sink down to a lower height than was comfortable.

Table and Chairs plus Bench

Across from the beds was the entertainment center. The drawers in this piece of furniture, along with the two drawers in the nightstand were all that were provided. My ski luggage is quite large and not really practical to keep out and use as storage so I always unpack everything. The open closet had a single shelf. I ended up opening up the luggage stand and setting clothes on it as well. 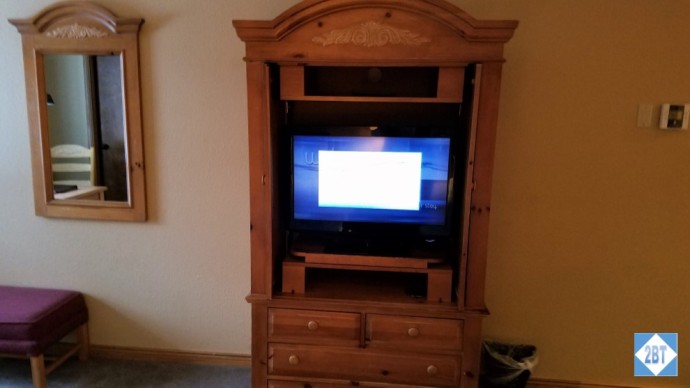 Across from the closet was what I guess might be called a kitchenette, though there was no microwave. It had a sink and the coffeemaker and ice bucket sat on either side. Below the counter was the mini-fridge. There was a microwave located in the vending machine area if we had needed it.  I ended up using the ledge as a place to empty my pockets each night. 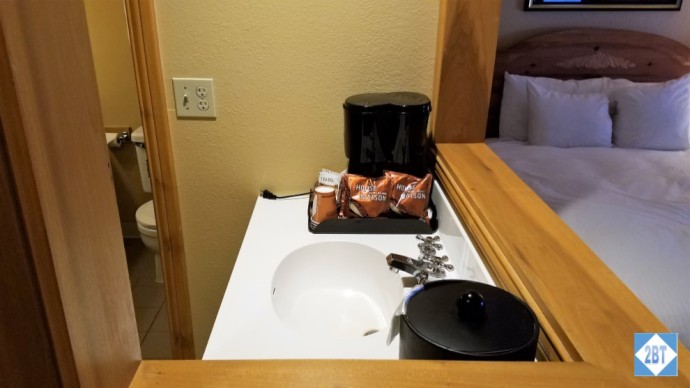 The bathroom was nice with a wide counter top that allowed my roommate and me to each have a side with plenty of room for our own things. That was good because there was no other shelving. 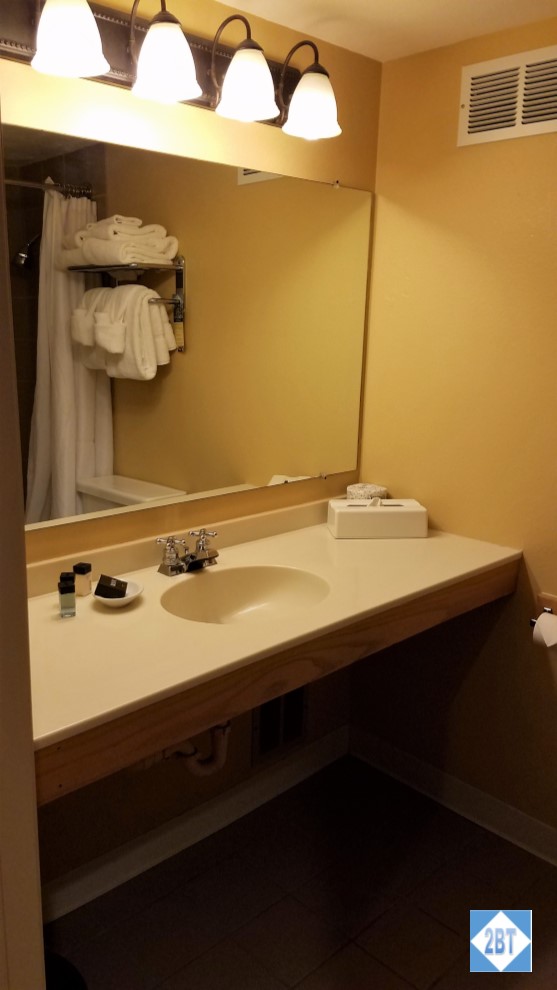 The tub shower had a curved shower rod, which I like, and I was pleased to see the showerhead had an adjustable spray. I was a little concerned at first because the showerhead was fairly low but it ended up being fine and I realized I liked being able to stand under the strong spray soothing my muscles while not necessarily getting my face soaked. 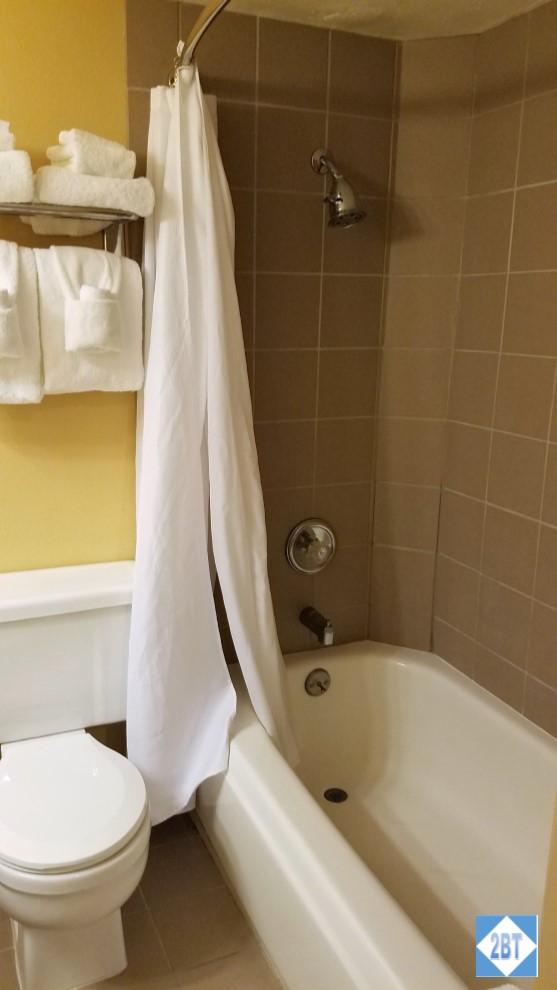 Toiletries were by ROAM and while I thought the square bottles looked cool, it was difficult to squeeze out the conditioner. 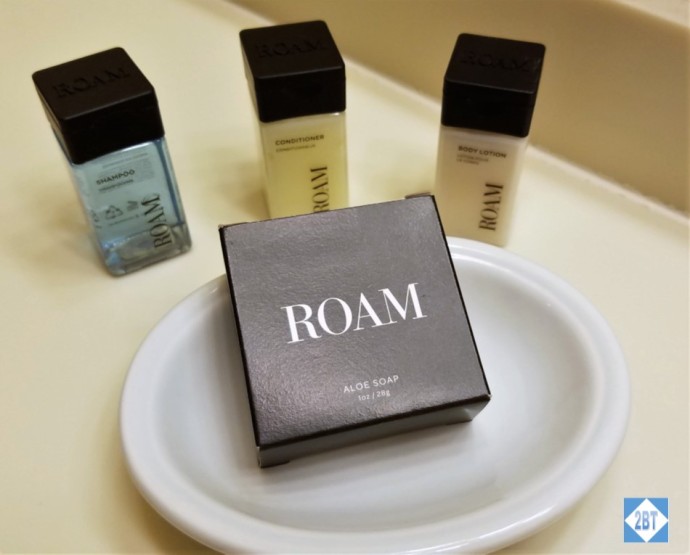 Robes were provided for the hot tub but bring your own footwear. The hot tubs and the heated outdoor pool are all within the same fenced area and are between the hotel and the slopes. 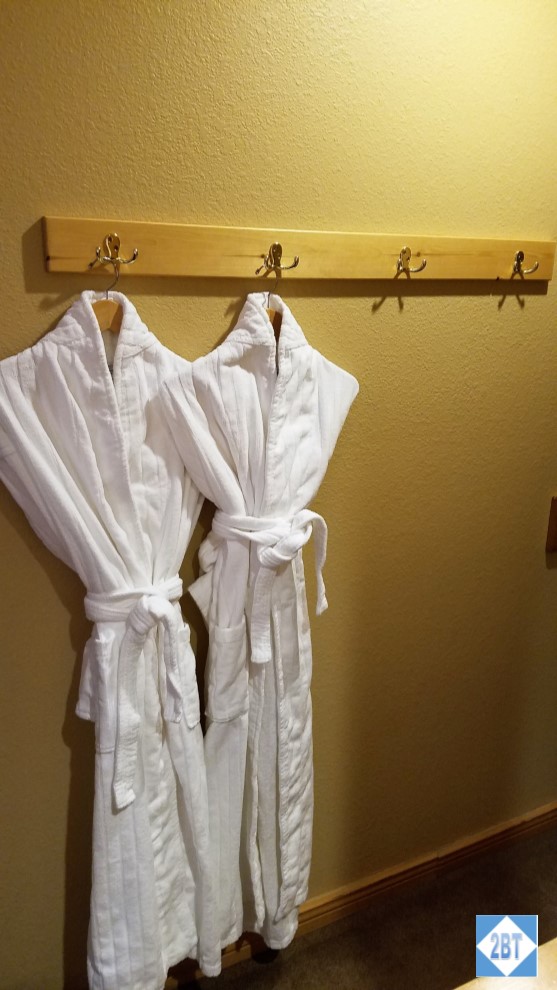 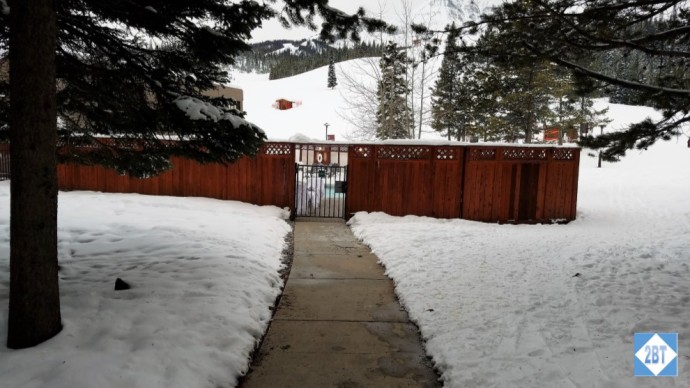 Path to the pool and hot tubs.

There is a small gym in the basement with three cardio machines, an adjustable bench, some hand weights, medicine balls and fitness balls. The adjacent locker rooms is where you’ll find the saunas. 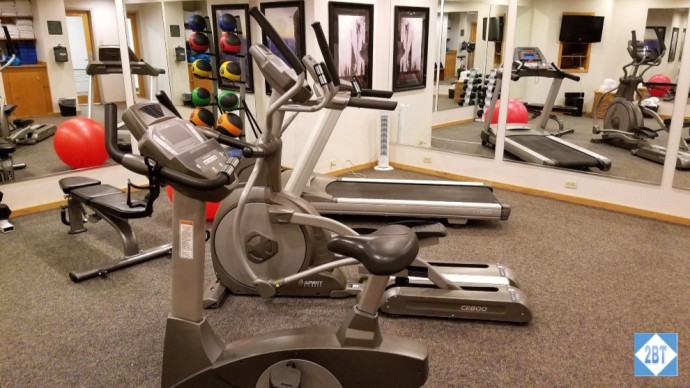 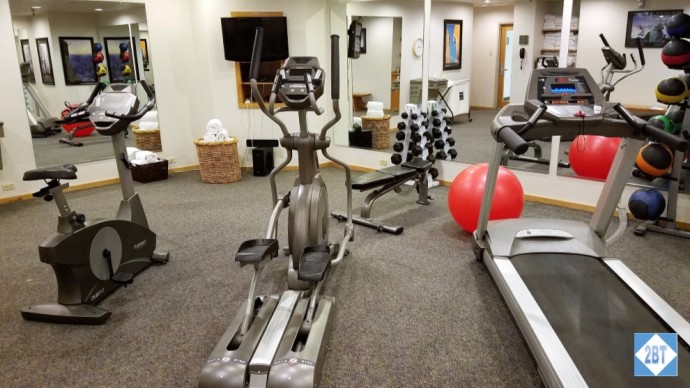 Next door to the gym in the laundry room. I did not use it but there were quite a few machines. 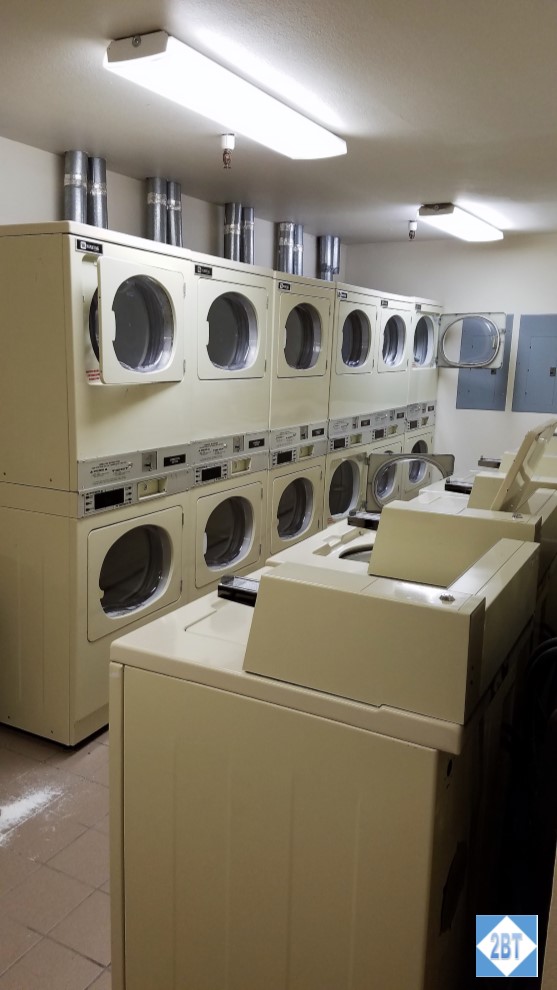 While I really prefer staying in condos it’s hard to beat the convenience of The Huntley. Another wing of the same property contains the Shoshone Condominiums but they’re all 1 BR units with a king bed, a sleeper sofa and a Murphy bed. That’s just not real conducive to non-family groups, or those who aren’t trying to stuff a room full. So I can foresee our group staying at the Huntley for our next several visits.

While some of us did not have much trouble with noisy neighbors, some rooms were provided earplugs with the acknowledgment that with an older hotel (this one built in the early 70s) comes the issue of noise.  We did hear our upstairs neighbor doing what sounded like laps back and forth in their room.  It was very odd.  But the hotel is due to undergo another refresh within the next couple of years and I’m hoping for some upgrades as a result of that.