One good thing about flying to my ski destination a day before the group is that often I can use the free night that comes with one of several credit cards in my wallet. That’s one of the reasons I selected the SpringHill Suites at the SLC airport. Another is that they have a free airport shuttle. Normally the included breakfast would be a draw as well but in this case I have friends in the SLC area and they came and picked me up for breakfast so that was a non-factor this time around. 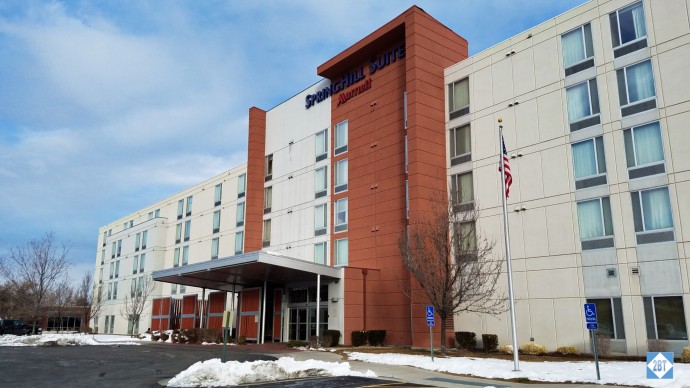 I arrived at the airport and while one of my bags was one of the first bags on the belt, it took another 30-45 minutes for my skis to be delivered. It was after 10:30 PM before I collected my luggage and called the hotel regarding the shuttle but fortunately it did not take very long for it to arrive. The shuttle services both Hilton and Marriott properties that are all very close together. In my case the cabin crew from a recent flight was on the shuttle with me but was not staying at the same hotel. The SHS was the third stop for this particular shuttle run.

The entryway was nice and wide and I didn’t have any issues pulling in both of my giant luggage pieces plus my rollaboard at the same time. As it was about 11 PM I was the only person checking in and the staff members worked together to get me all set up. Once checked in I told them I’d take my rollaboard and giant bag upstairs and would be right back down to get my skis bag but they proactively offered to just store my skis behind the counter. I was delighted to accept their offer as there was nothing in there I needed for this one-night stay. 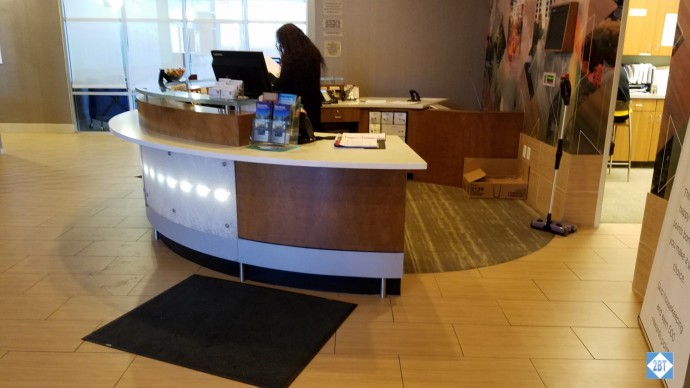 I took the elevator to my room on the 4th floor and was pleased by how large it was. Even if I’d had to wrangle my skis bag on it, it wouldn’t have been too difficult. My room was just over halfway down the hall. I noted that the hotel seems to be fairly new and I really liked the color palette used for the walls, carpet and even the artwork.

I had booked a king suite and was not offered any kind of upgrade. Frankly that was not a big deal. I also was not offered a welcome gift but didn’t know whether or not I should have received one since I was on a complimentary stay.

Update: 07 MAR 19 – I just noticed that I received a welcome bonus of 250 points even though no mention was made of it either at check-in or check out.  But I’ll be happy to take the points!

Being a suites property, the door from the hallway opens into the “living room” area.  The minibar is the first thing you see when you walk in.

There’s a desk with a wall divider behind it that serves as a separation from the “bedroom” section of the room. The TV is on a stand between the two sections and can be swiveled so it can be viewed from either side. 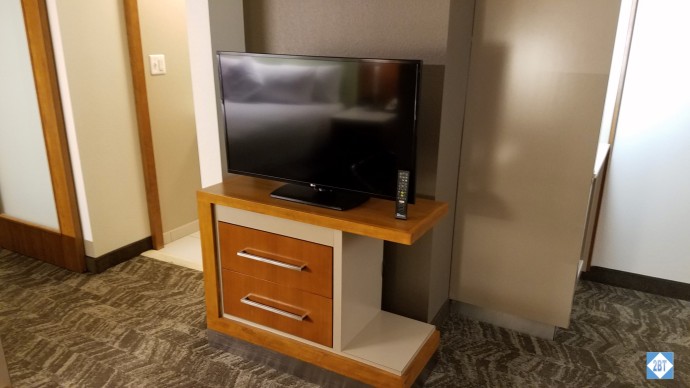 The bed had nightstands on either side and each had electrical outlets, which is great. There was only a lamp on one side of the bed but in its base were two USB ports, which was nice. There was a light mounted on the headboard, but it could only be operated via a switch that could not be reached while in the bed. That just seems to be a very poor design to me.

On the outside wall, next to the window (all directions face parking lots and other hotels, so don’t come here for the view!), was the wardrobe. It had a couple of small drawers in its base and there were a couple of drawers in the TV stand but those were the only ones I saw. That seems odd for a suites property where you’d assume the normal stay is a week or more. But maybe I’m wrong about that. 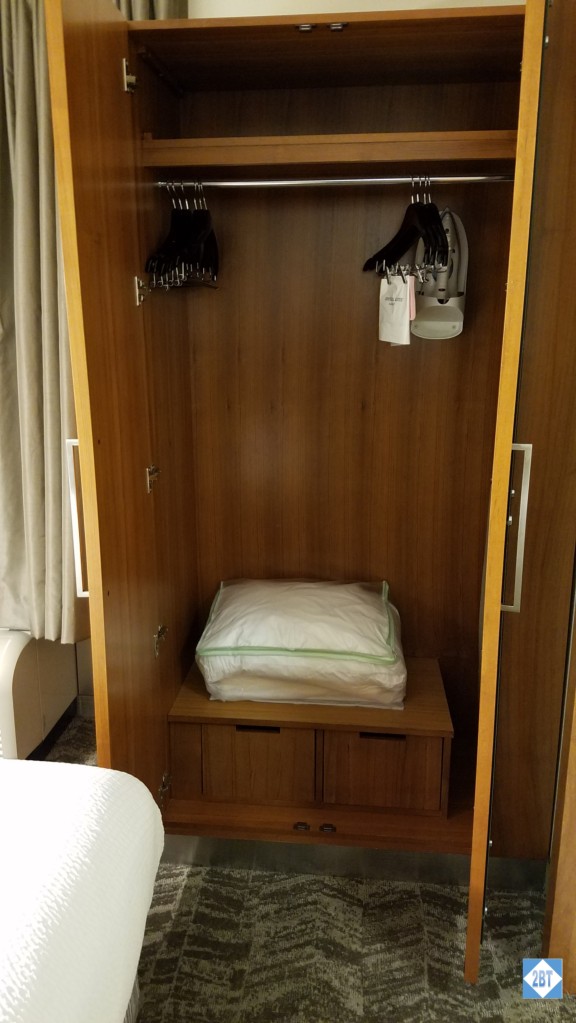 The bathroom setup was like none I’d ever seen before. There were actually two separate portions and they were side-by-side. I’ve seen bathrooms where you step into an area with a sink and the mirror and beyond that was a door behind which the toilet and shower/tub could be found but that’s not how this was set up. While lying in bed and looking at the wall at the foot of the bed there were two doors. On the right was a small half-bath with the toilet and a pedestal sink that pointed into the corner. There were mirrors on each side of the wall above the sink so you could get quite close to them. That was good because there was no make-up mirror in this suite. This is also where the razor outlet was located. The lighting in this portion of the bathroom was a much more yellow bulb than in the room or the other part of the bathroom. 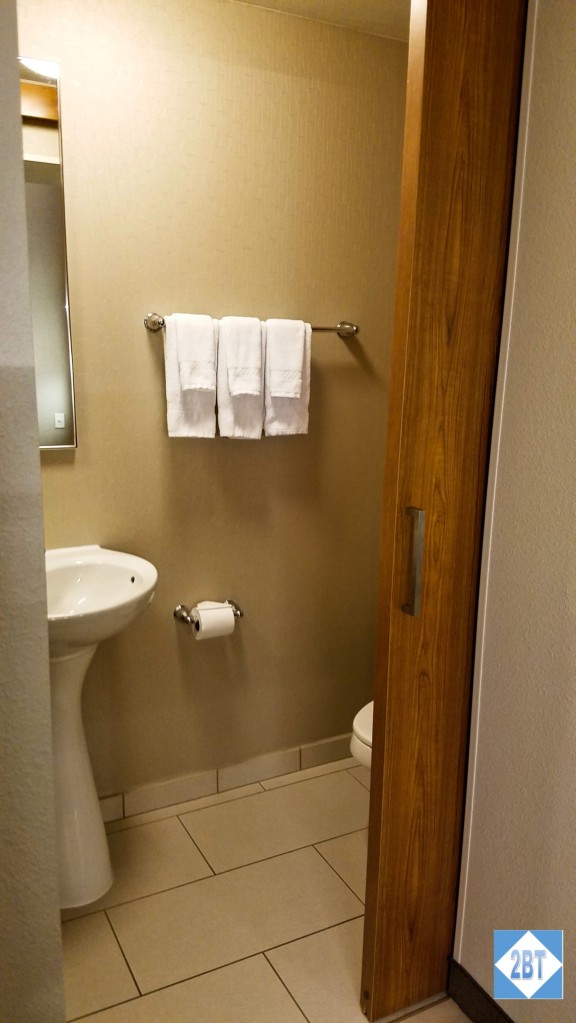 SpringHill Suites SLC Airport King Suite Half-Bath (I had a hard time finding an angle where I wasn’t reflected in the mirror!)

The second part of the bathroom had more blue/fluorescent lighting and contained a walk-in shower on one side and on the other a counter running the full width of the room with a sink. It also had some shelving beneath the counter where one could store a toiletries kit and where the hair dryer stayed. The wash cloths were stored in the half-bath section so I had to be sure to grab one before taking a shower. There was no way to point the showerhead such that you didn’t get wet when first turning it on. I’d rather wait for the water to warm up before it hits me though at least it warmed up pretty quickly. At least I was able to adjust it to produce the very strong spray that I like. I just found this whole divided setup weird though I can see how it makes better use of the space, especially if there are two people staying in the room.

Toiletries were by Paul Mitchell, the standard brand for limited-service Marriott properties.

I did like that the desk had a sliding panel where you could see into the bedroom area. This could be useful if someone was working at the desk and someone else was on the bedroom side of the partition. 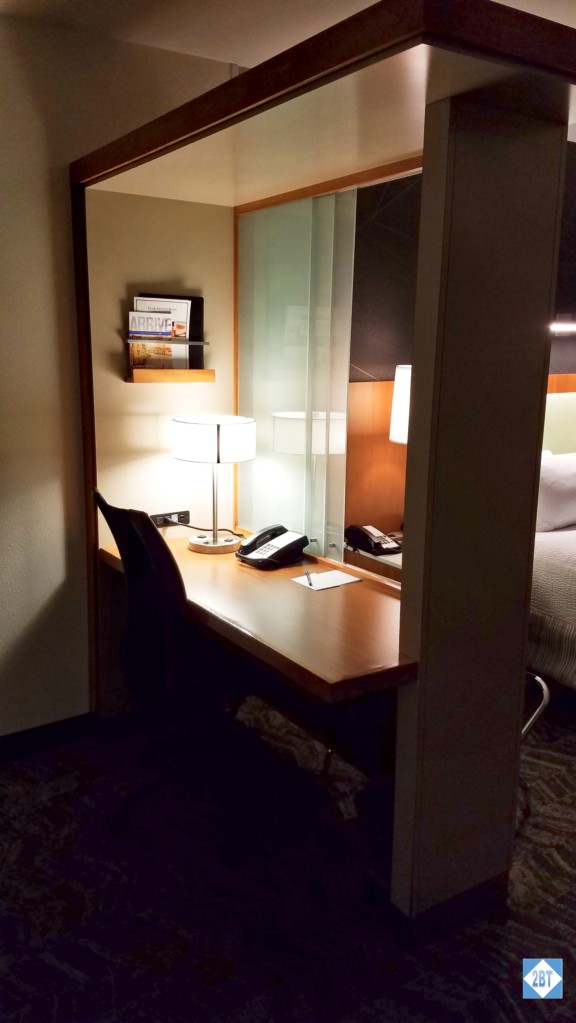 The sofa was an L-shape and did have a pull-out bed beneath it. It looked comfortable enough though I did not use it.

This wasn’t the most quiet hotel I’ve ever stayed in. When the neighbors turned on their shower I could hear it very clearly. It was also impossible to close the outer door quietly.

The hotel does have a small indoor pool.  It is open from 6 AM to 11 PM.  Outside was a patio.  There was a similar patio on the front side that could be used for breakfast dining.

And a small 24-hour weight room. They’re adequate for their purpose as you’re typically not booking this hotel for these amenities.

The lobby has a small store area where you can buy food that can be microwaved as well as a few staples you may have forgotten to bring.

The breakfast buffet was not great but was perfectly adequate and about what I’d expect – except for the OJ. I did not eat breakfast here but thought I’d have a glass of OJ and it was some of the worst I’ve ever had. Instead of even pouring Minute Maid or Tropicana into a pitcher, this was some sort of machine-fed juice that was terribly disappointing.  The buffet is open 6-9 AM during the week and 7-10 AM on the weekend. 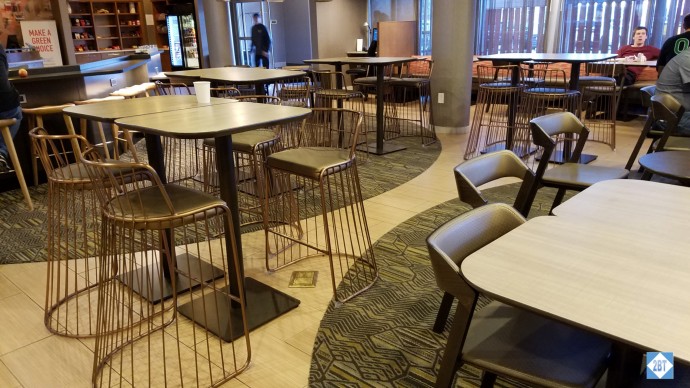 In the lobby there was a single small desk with a computer that served as the business center.

Though the bathroom setup was weird and the OJ was terrible, I would have no problem staying here again, especially if I had a free night certificate. It was easy to reach from the airport, they have a free shuttle and the staff was very nice.

#TravelTuesday photo: just over 50 years ago the @Olympics were held here at #Olympiapark München 🇩🇪 It was the scene of great triumph (Mark Spitz 7 golds) and greater tragedy (11 Israelis & 1 German killed).