My ski club visited Park City this year for the first time in several years. As our club has aged we have become more enamored of staying slopeside and are willing to pay for it. On our last visit to the PC area we stayed at the base of the Canyons side of Park City Resort. The condos were nice and large, reminiscent of those at the Summit, in Big Sky, MT. While staying just steps from the lift was super-convenient, when it came time for dinner our trip leaders had organized private shuttles for all 40+ of us to wherever we were dining that night. If you chose not to return with the group it was usually a 30+ minute bus ride to get back to our condos. And if you wanted to ski at Deer Valley, the bus ride was more than 40 minutes.

While I really liked the units themselves at the Canyons base, I felt like we spent too much time in transit each day so I pushed for our club to return to the Park Station condos. These are located right at the base of Main Street Park City so it’s an easy walk to lots of dining and shopping. There’s a bus stop right at the end of the condo’s driveway so it was hard to get more convenient that that. From the east side of the street, closest to the condos, it was a 4-minute bus ride to the base of Park City Resort. From the bus stop across the street from the condos it was an 11-minute ride to Deer Valley. We did have dinner away from Main Street one night and due to the way the buses run it took us about 20 minutes to get there. The good news is that the ride back was much shorter as we’d gone the long way ’round on the outbound leg.

Each condo in this complex is independently owned so they each have unique decorations though the general furnishings and layouts are mostly the same. There are two buildings and the 100-series rooms are in the building closest to Park Avenue while the 200-series rooms are on the building on the Deer Valley Drive side. The pool and outdoor hot tubs are located between the two buildings. Park City had over 250 inches of snow before our arrival but the maintenance crew did a good job of keeping the paths between the buildings and the hot tubs shoveled. There are also stairs from that central area that lead up to the base of Main Street and that was kept cleared as well, so good job to the crew for that.

Our group had all two bedroom condos and they were basically the same layout with one exception as I’ll describe below in the master bedroom. The condos have a small entryway and then the room opens up into the living room, dining area and kitchen. In our case we had a sleeper sofa, a love seat as well as a comfy chair with a side table. 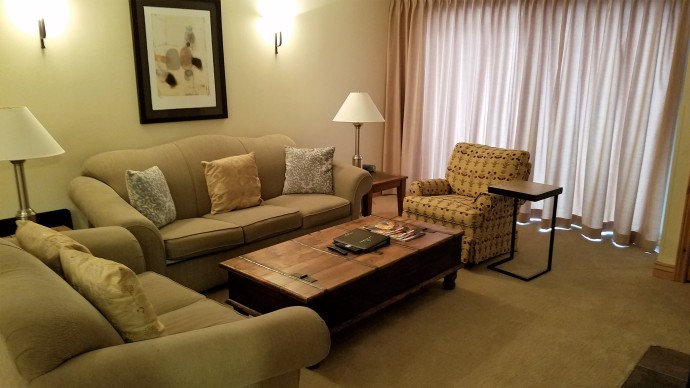 Across from the sofa was a working fireplace (not gas) with the TV mounted above it. 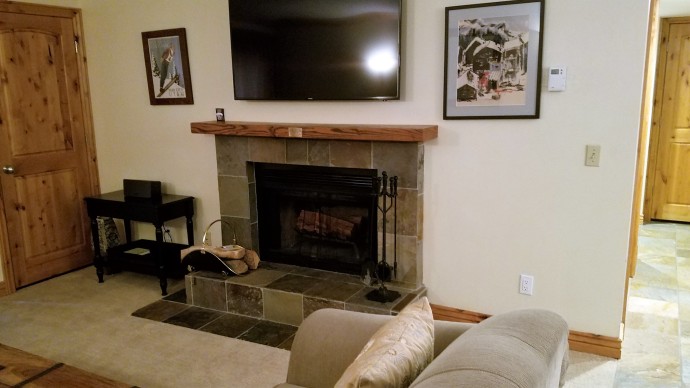 Fireplace and TV of Park Station #223

Our balcony was stacked with firewood and we had a view of the pool and hot tubs. A second hot tub is not visible behind the tree. There’s also an indoor hot tub in the basement of Building 2. The jets there were not as good as the one in the outdoor tub. 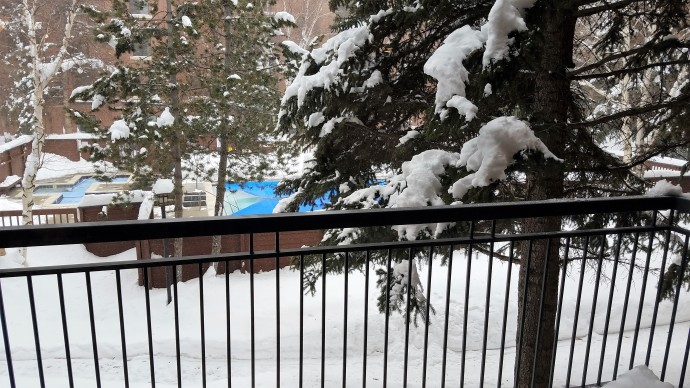 View of Hot Tub and Pool from Park Station #223

While there was no closet right by the door, the owners of our condo had thoughtfully put some hooks both for coats and for ski equipment. Not pictured under the coat hooks was a bench that had three baskets underneath it. This was a perfect place for storing hats, gloves, helmets, etc. all the little pieces needed for a ski trip. 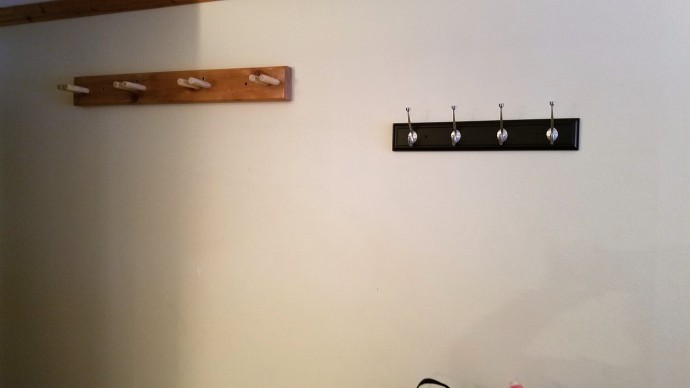 Our dining table was just to the right and could seat six. There were also two bar stools at the kitchen counter. There was almost no legroom there so they might be ok for kids but we mostly found them to be in the way. 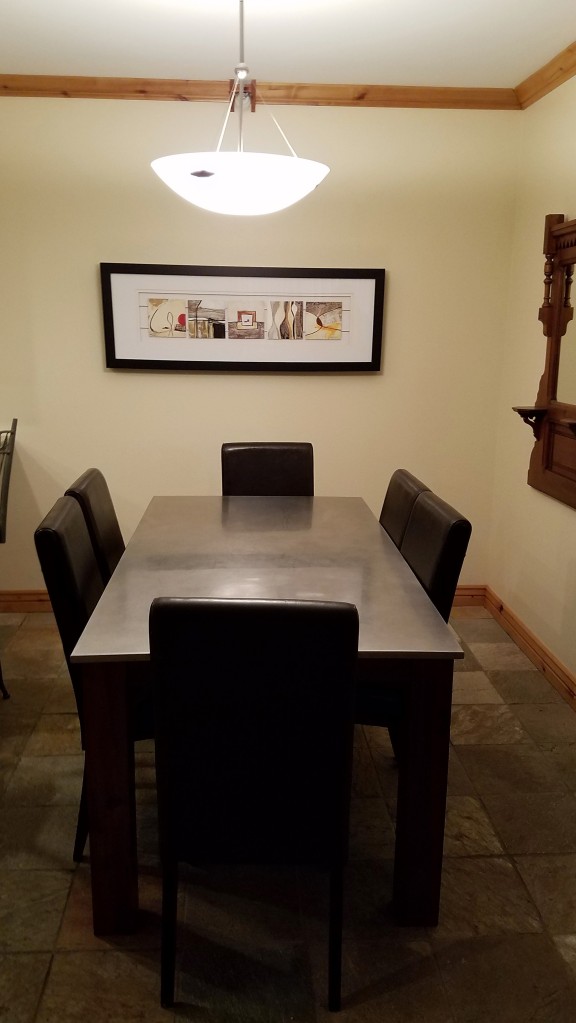 Unfortunately I couldn’t get a photo of our kitchen before the counters got loaded up with our groceries but it was a decent size. But put more than two people in it and it would get crowded quickly. 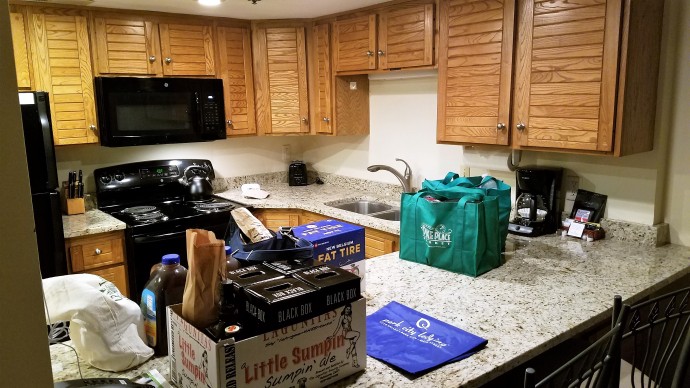 Across from the kitchen, but not pictured, was a rather large closet that was mostly empty. I assume this would be for anyone who was using the sleeper sofa but it worked out good for us as it gave us a little extra space.

Some condos, like ours, had the ability to lock off the master bedroom so it could be sold as a hotel-type room. It had a mini-fridge and a microwave. What that meant was it had its own entrance hall and because of that, the master bath was quite small. By comparison the units where the master bedroom could not be locked off, the space used for the hall in the other design could be incorporated into a huge master bath. As we did not use the entrance directly into the master bedroom, we used that little hallway as storage space for all of our luggage.

The master bedroom is fairly large, with a king-sized bed. I am told that it sagged a bit towards the center. The closet was on the left from this photo. 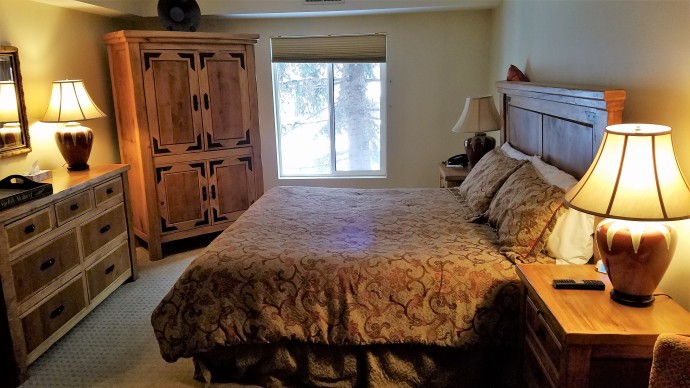 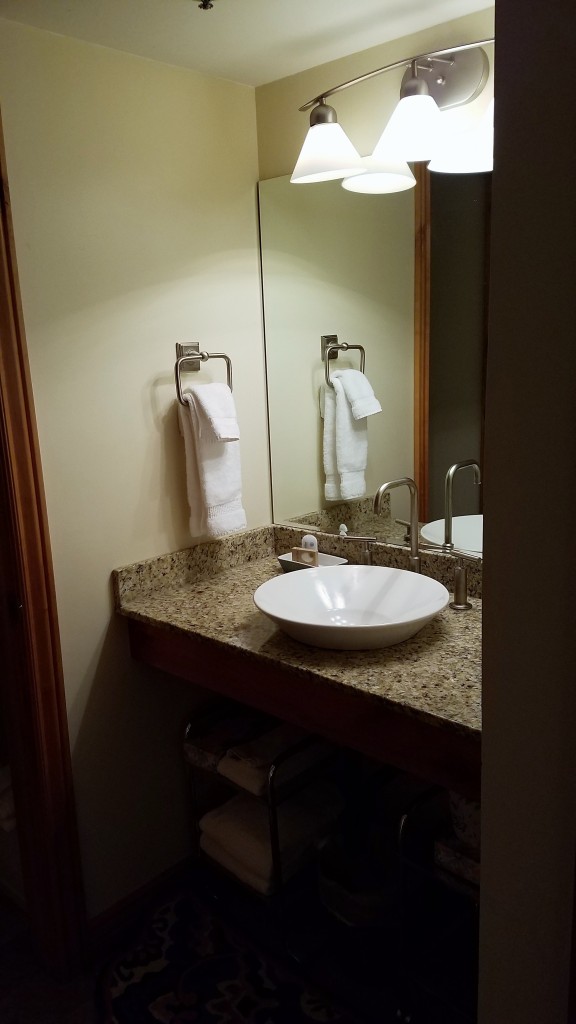 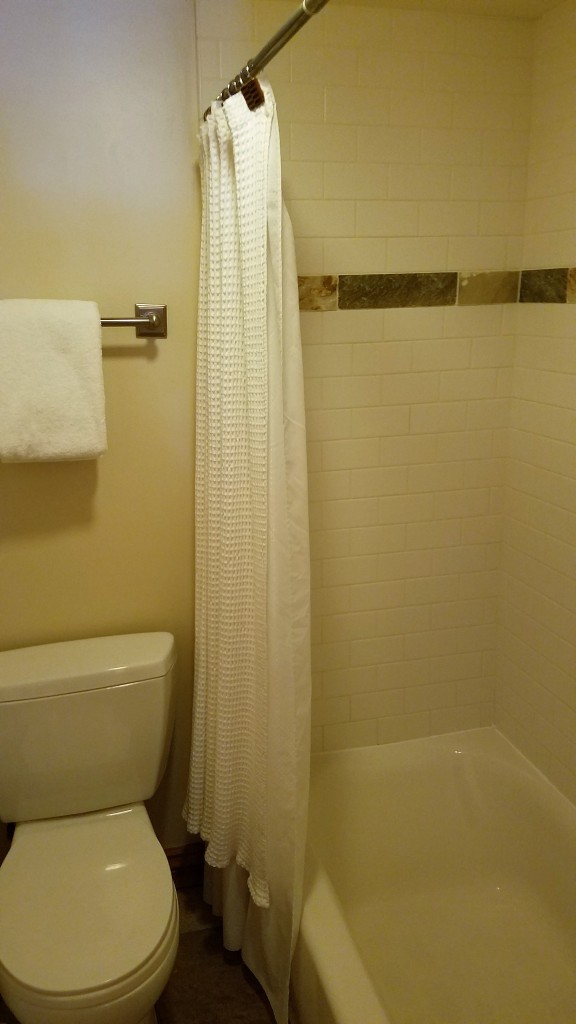 Toilet and Tub/Shower in Master Bath of Park Station #223

The second bedroom was MUCH smaller and yet a twin and a double bed were crammed in there. My roommate graciously gave me the larger bed but there was barely room to get between the beds which was her only avenue in/out of the bed as hers was pushed practically next to the wall.  Our beds were quite tall as in addition to the mattress and box springs, there was a topper of about 4 inches on top of the mattress.  My feet didn’t come close to touching the floor and it gave the term “climbing into bed” a new meaning. 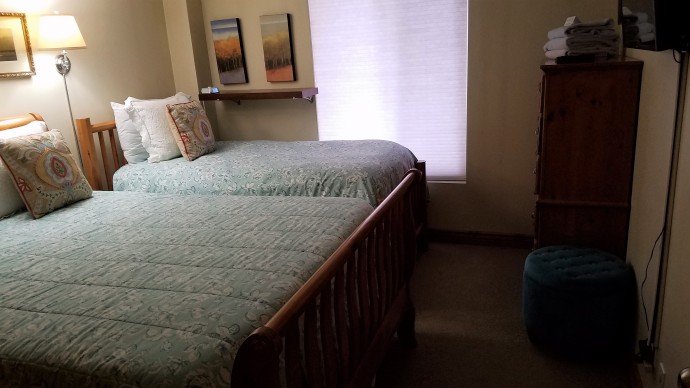 The closet, to the left of the double bed, had very few hangers provided and one shelf but the back had a funny angle on one side so it could not be used to its fullest extent. Since there were so few hangers we didn’t come close to filling it up but it was odd.

The chest of drawers was a pretty decent size and we divided up the drawers between us. I also was able to use the shelf in the closet which wasn’t as easy for my shorter roommate to access.

One frustrating thing was the lack of accessible electrical outlets. I believe she may have had one on the outside wall of the bedroom but I did not have one anywhere near my bed. Fortunately there was a shelf overhead where I could put my tablet each night and empty my pockets at the end of the day but my phone had to stay across the room each night so it could recharge. That’s where I left my tablet during the day while we were out.

Our bathroom was the one in the hall. Like the master, the sink was outside the room with the toilet and shower/tub. This actually works well for non-couples. There was no permanent shelving under the sink but I thought the rolling shelves were a great idea for the extra towels. The counter was just wide enough on each side of the sink for us to put our toiletry bags. 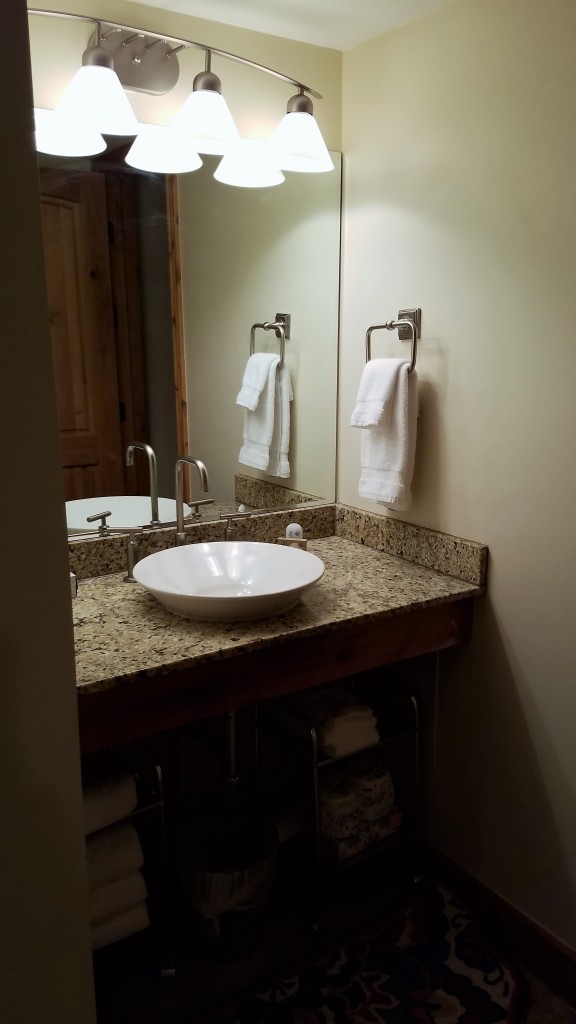 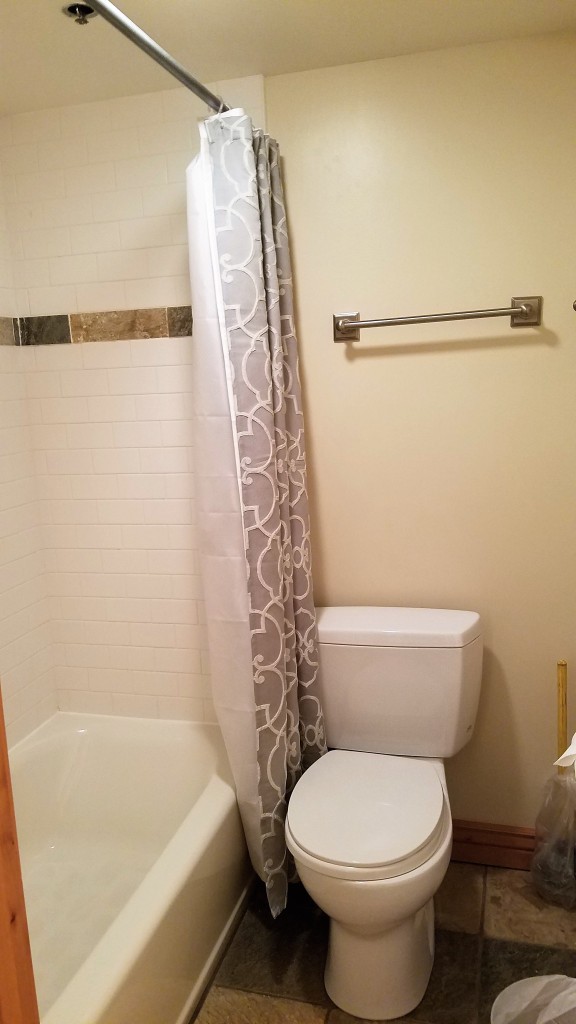 Tub/Shower and Toilet of Hall Bath of Park Station #223

The toiletries themselves were made specifically for Park City Lodging, a group that manages a number of rental properties in the area. I liked the citrusy scent of the shampoo and conditioner. I thought the idea of a bar of soap with the middle cut out was brilliant as we didn’t even come close to using up the soap that was provided much less an entire bar. I hope they are recycling what is left over. If not, then I think a bottle of body wash would be a better idea as we could take that with us.  A hair dryer was provided but if you have thick or long hair you may want to bring your own as it was not very powerful. 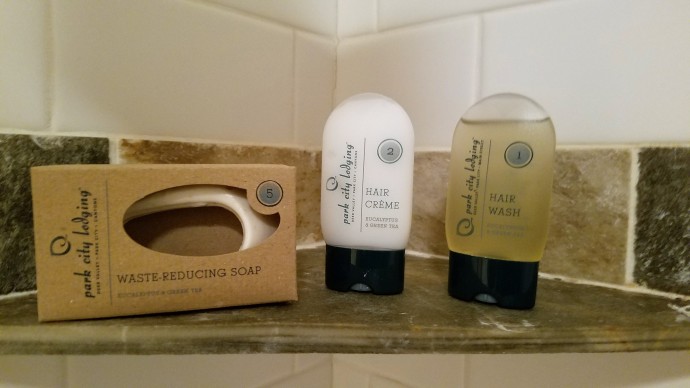 When we last stayed at this property 6-7 years ago some of us had very modern units and others were still left in the 1990s. By now all units have been upgraded and none of our folks had complaints with their condos. You can’t beat the location of this place. Even if you stay slopeside at Park City or Deer Valley you’ve still got to take the bus to get to dinner unless you’re dining at the resort base. For that reason this remains my go-to property in Park City.

#TravelTuesday photo: a shrine above the Mount Fuji Panoramic Ropeway near the peak of Mount Tenjo 🇯🇵