On a recent business trip to Vienna we looked at staying close to my company’s office, which was near the airport. There are a couple of hotels in the vicinity but the only real options for dining that didn’t involve a cab or train ride were restaurants in the airport itself. The CAT (City Airport Train) was a great option for transiting back and forth between the airport area and the city center. It’s a non-stop train that takes about 16 minutes and runs every half-hour. The Hilton Vienna is right across the street from the train station and that made its selection a no-brainer. When exiting the CAT part of the train station, turn left, exit the building and the Hilton is across the street and slightly to the right. The signage in the train station is not great as there’s just one small sign and when I first arrived I couldn’t see it due to a display set up in the middle of the station.

There are two entrances to the hotel. I arrived via the door near the restaurant; the other entrance faces the park. The check-in desk is quite obvious and will either be straight ahead or immediately on your right upon entry.

The lobby looked fresh with lots of light-colored wood and a large seating area.

The bar is just to one side. 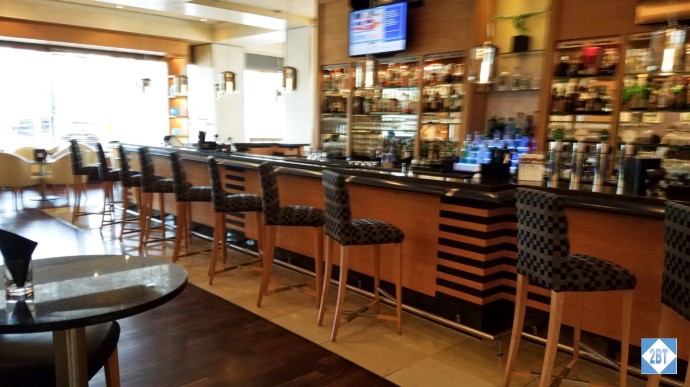 I was greeted promptly and my Diamond status was recognized. I arrived around 2:30 PM on a Sunday afternoon and as the hotel had been completely full over the weekend, my room was not yet ready. I waited in the lobby and enjoyed some of the various flavored ice waters available. The lobby was a little bit warm for my preference but I knew that was often the case in Europe. Living in the American Southeast I’m accustomed to having the air conditioning turned up quite high in public places.

It did not take too long for my room to be ready and I was assigned a room on the 11th floor, an executive floor that is one level below the club lounge. The hotel is undergoing renovation and the 11th floor had just been completed within the last two weeks.

There were two sets of elevators. Three were clearly older and during the first part of the week were the only ones working. By the end of my stay the two newer, digital, elevators were working. They seemed larger than any of the older three.

After exiting the elevator and turning to the proper side of the building, I walked down the longer hall, turned the corner and reached room 1105 about halfway down the shorter hall. The whole hallway had the “new carpet smell” which made it seem fresh. I liked the two-tone gray/silver on the walls.

The room was a very decent size for Europe. The bathroom was on the left, the wardrobe on the right with the bed area beyond that.

Waiting for me on the table was my welcome amenity of a bottle of water, some chocolates and an apple. 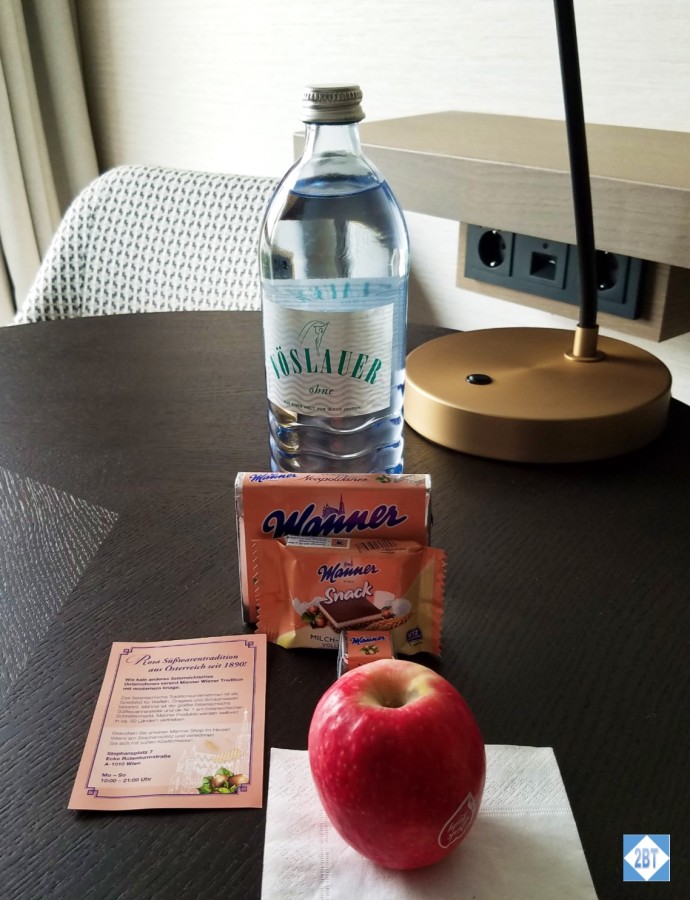 Two other bottles of water were available on the side (I believe one was still and the other sparkling) with a note that they were free to Diamond, Gold and Silver members and 5 Euro for other guests.

The hotel is actually called the Hilton Vienna am Stadtpark and my room did have a view of the park.

The wardrobe had a nice number of coat hangers and small drawers that worked well for socks and underwear. There was one shelf atop the hanging area. The safe was standard and was large enough for a laptop. Bathrobes were stored on the shelf. 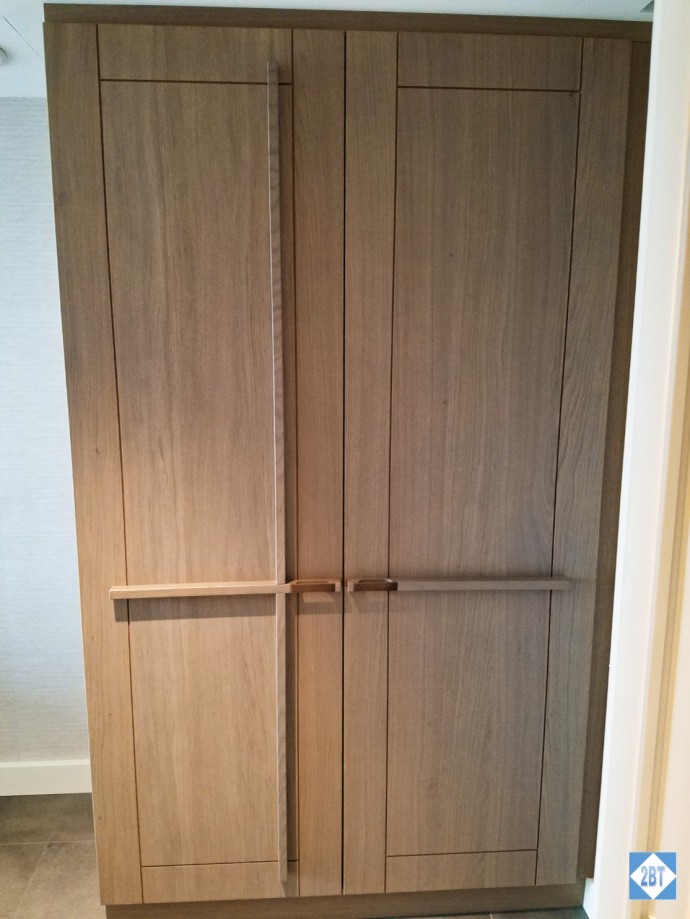 Slippers were available in one of the drawers.

The bed was large and comfortable.

On each side of the bed was an electrical outlet and 2 USB ports. Kudos!

In the corner was a chair with an ottoman. 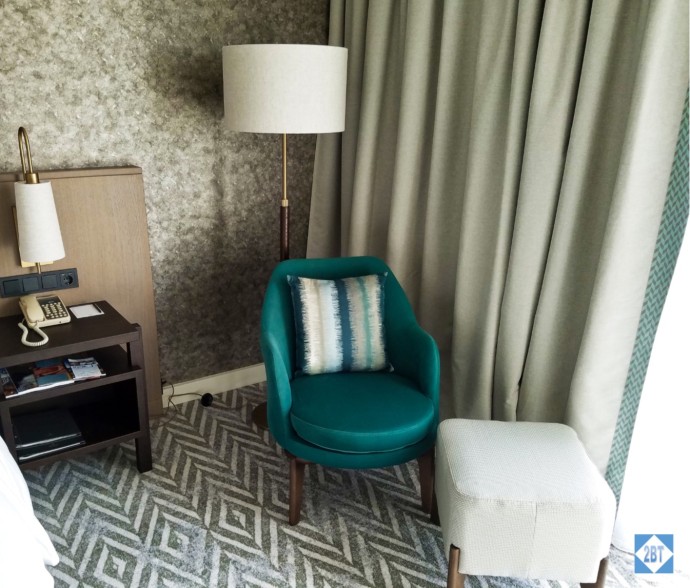 Across from the bed was a table and a TV atop the mini-bar. 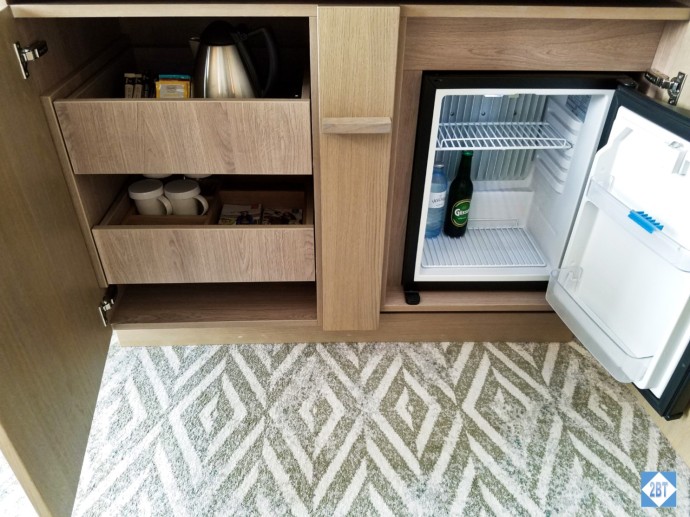 The bathroom was a little smaller than I might have expected but not too small. There was only one sink but that meant a good amount of counter space, which I appreciated. Not only was there counter space, but there was a full shelf underneath so there was plenty of storage space.

Hilton Vienna Bathroom Sink and Toilet. The circular portion of the mirror was magnified.

Toiletries were by Crabtree & Evelyn, which I believe is standard for Hiltons. The scent was a bit too floral for my preference but they worked well enough.

There was no tub but the shower stall was large enough that it’s possible one existed before the room was refreshed. I didn’t mind just having a shower stall but I hate that they’ve just redone this room and they installed that stupid half-sheet of glass that leaves the back of the shower stall open. Unlike the room in Copenhagen, there was no rainfall shower head so that meant you had to strategically turn it so that you didn’t cause water to splash out the back. Even though the shower head looks to be hand-held, it couldn’t be removed from the holder so there was no way to use it more efficiently. Stepping out of the shower, it could be very slippery upon exiting so be cautious when doing so.  The toiletries dish was tiny. It was quite a squeeze to get shampoo, conditioner, body wash, shave gel and a razor to fit without having something fall out either over the side or through the slats.  A small shelf in the back corner useful for propping up a leg while shaving would have been most welcome too.

The towels, by contrast, were great. They weren’t hugely fluffy, but I understand it’s hard to keep them that way as often as they’re washed. But they were very large and I really liked that.

I went out for the afternoon/evening and the room was still a bit warm when I returned. I kept waking up, hot, throughout the night. The next day it was still warm when I returned from work. At 9 PM when we returned from dinner I went to the front desk and the associate got maintenance to come up and have a look. I was thrilled that maintenance was even still available at 9 PM. He opened ceiling panels, did some stuff, removed the filter and took it away to clean it. The room was marginally cooler that night at 22.9C and I was a bit jet lagged so I slept a bit better. But by the third night there was no real improvement. The room was still over 23C. I talked with the same front desk associate and she moved me to a corner room, 1102, which was across the hall and down two doors.

The room was larger and had windows covering two walls. As it faced a different direction, this may have helped keep the temperature down. I also left a note for the cleaning staff asking for the curtains to be kept closed all day. The coolest temperature I ever saw on the thermostat was 22.5C/72.5F. For me this is a temperature that’s fine during the day but is way too hot to sleep. My home thermostat goes down to 66F/18.8C at night during the summer and 63F/17.2C in the winter. I talked to several people here in Memphis who said their thermostat never goes above 70F/21.1C. I understand wanting to save energy and I’m fine with having the room warm during the day but I need it cold at night, especially since there’s no way to layer bed covers. There’s only a duvet provided. If a top sheet were also present that might help but with only the duvet the covers are either on or off – there’s no happy medium.

The corner room was noticeably larger and included an actual entry area with a tile floor instead of the basic entry hall with the smaller room. 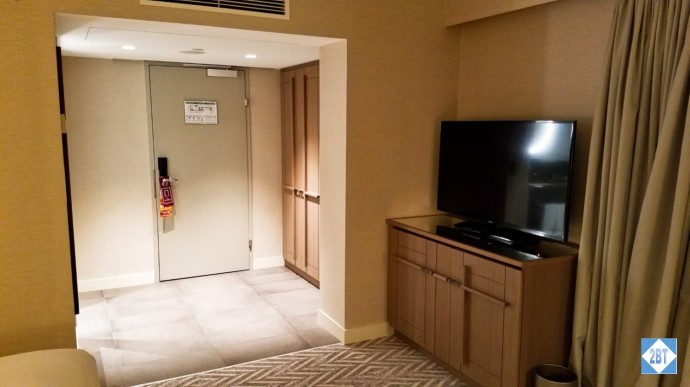 The table and chairs were in the corner where the two windows met. There was no outlet conveniently placed for that table.

The wardrobe had an extra door with shelf space, which was much appreciated as there wasn’t a lot of space for folded clothes otherwise.

While the new room remained marginally cooler than the first, I attribute that more to keeping the curtains closed than to the air conditioning working better. I now believe that the air is mechanically fixed not to allow the rooms to be made any cooler. That’s a real shame as I want an international hotel to be able to accommodate preferences from around the world.

The gym’s space was under renovation while I was there and the machines had been relocated to adjoining conference rooms. I slept so poorly due to the heat that I never got up early to use the equipment. 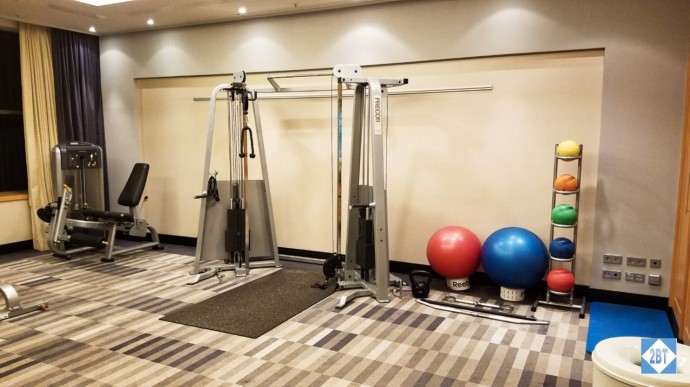 I did visit the club lounge one morning only to see a sign indicating breakfast was served in the restaurant. There were appetizers served in the lounge in the evenings but I never visited at this time.

The breakfast buffet, free to Diamond members, was served in the restaurant, S’PARKS. It was always quite busy but there was never much of a wait for any station. In the evenings only the outside seating area was open. I assume that as the weather cools off the outdoor seating area is closed and the indoor seating area is utilized.

This hotel has a great location both for airport access and for sightseeing. It’s only about a half-mile from Stephansplatz and is near several train and metro stops. I would be glad to stay here in cooler weather – provided the rooms aren’t heated too much!

#TravelTuesday photo: a statue of #Artemis inside the #Vatican 🇻🇨