My travel buddies and I needed a weekend getaway to escape the heat of our respective cities.  I read an article about fun things to do in Vail and as Colorado is a 2-3 hour flight for each of us, it made a nice, central place to meet up.

Knowing that lodging wouldn’t be nearly as hard to get in the summer as in the winter, I’d hoped to get a 2-bedroom condo at a reasonable price.  That way we’d each have our own bed and plenty of space.  It turns out that most of the condos can’t be rented for a single night.  I did have a travel agency track down one place but they wanted $300 for the one night.  No thanks.

I looked at what hotels were available on points and there weren’t a lot of reasonably-priced choices there either but I did find the Holiday Inn had a room that could sleep three adults.  The hotel is actually across I-70 from the resort but during the summer, there’s no charge for the parking deck at Lionshead so we were only a short drive away.

The valet greeted us promptly upon arrival. Leaving the car with the valet is really the only parking option but the price is cheaper in the summer than in the winter.  In the end, we were not charged at all.  I don’t know whether that’s due to my Platinum status, because we booked the room on points or if they just forgot.  But when I checked out there were no charges billed to the room.

Once inside we had a brief wait while other customers were being assisted but then were welcomed warmly and our room was assigned quickly. 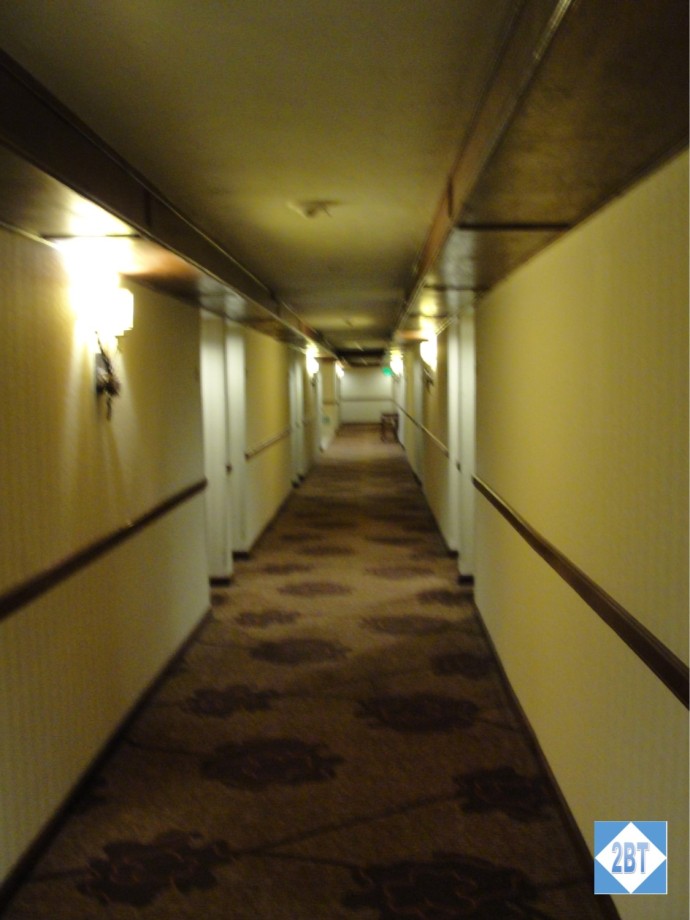 Hallway to our room.  Carpet could use refreshing.

Since we had three adults traveling, we’d ordered a king room with a sleeper sofa. I was a little surprised at how small the room was and when the sleeper sofa was pulled out there was barely room for one person to get out of the bed on that side. The sofa is a double so I would not plan to have two adults (or older teens) sleep on it. The king bed was quite comfortable and the sofa was sufficient for a single night.  At the foot of the bed was a small chest that doubled as a TV stand.  Beside that, near the sofa was a table with a couple of chairs.  While the storage space was needed the whole room just felt crowded. 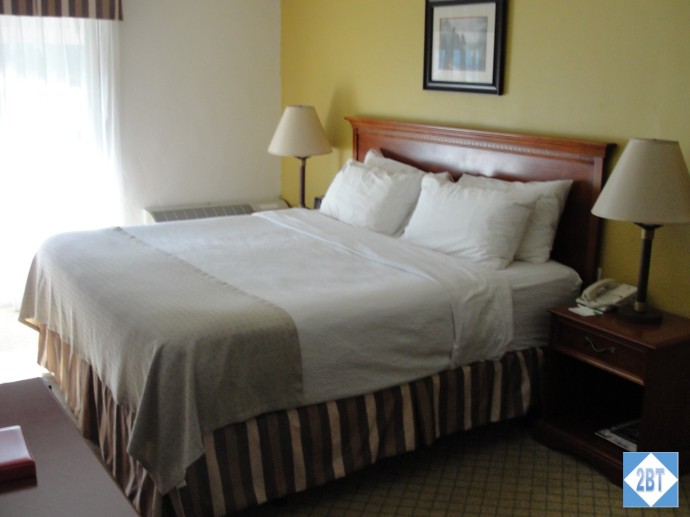 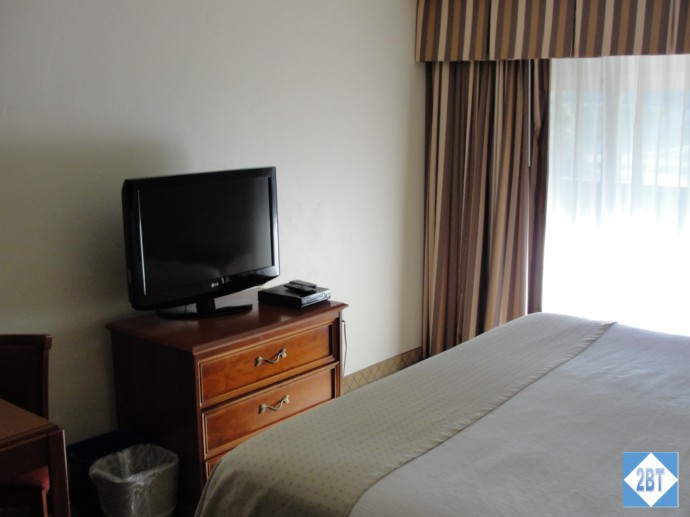 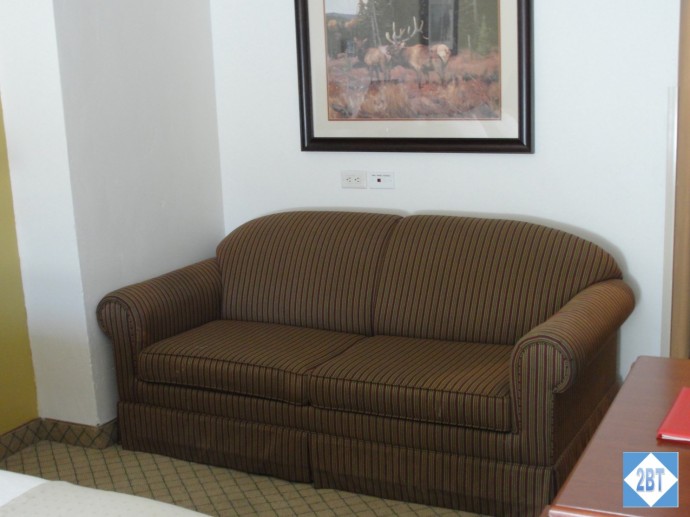 Our reservation had noted there would be three people but the room only had two bath towels, two hand towels and only one washcloth.  We asked for more and they were brought quickly to our room but it seems to me that should have been an item on a basic housekeeping checklist.  The towels need a bit of an upgrade as they were small by today’s standards and relatively thin. 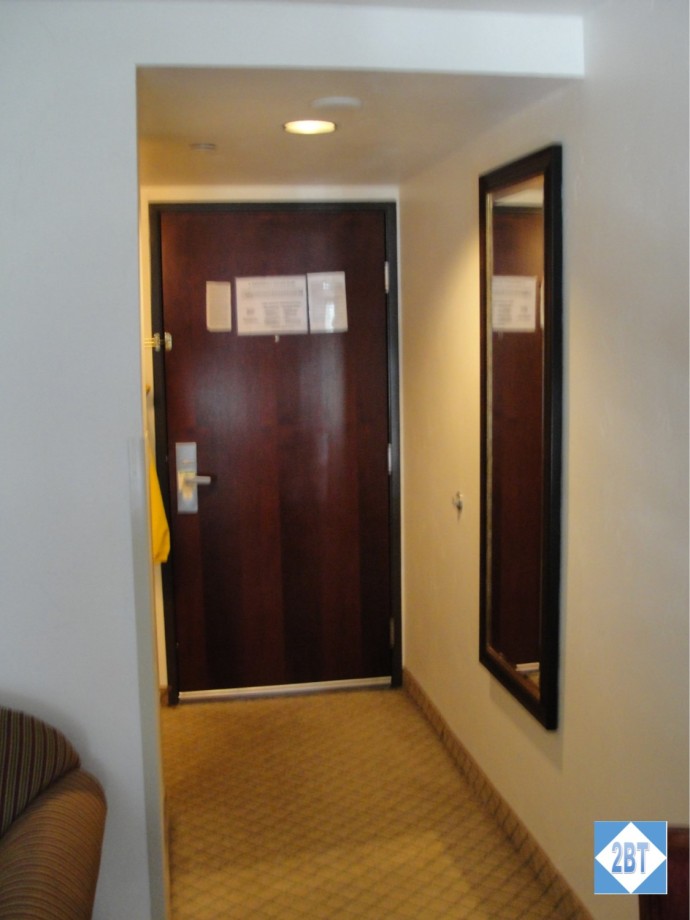 Entrance hall in the room

The hair dryer was attached to the wall in the bathroom (not uncommon) but it would have been helpful if it had been attached just outside the bathroom in the area where the coffee maker is. That would allow one person to be in the bathroom while another is drying their hair outside. 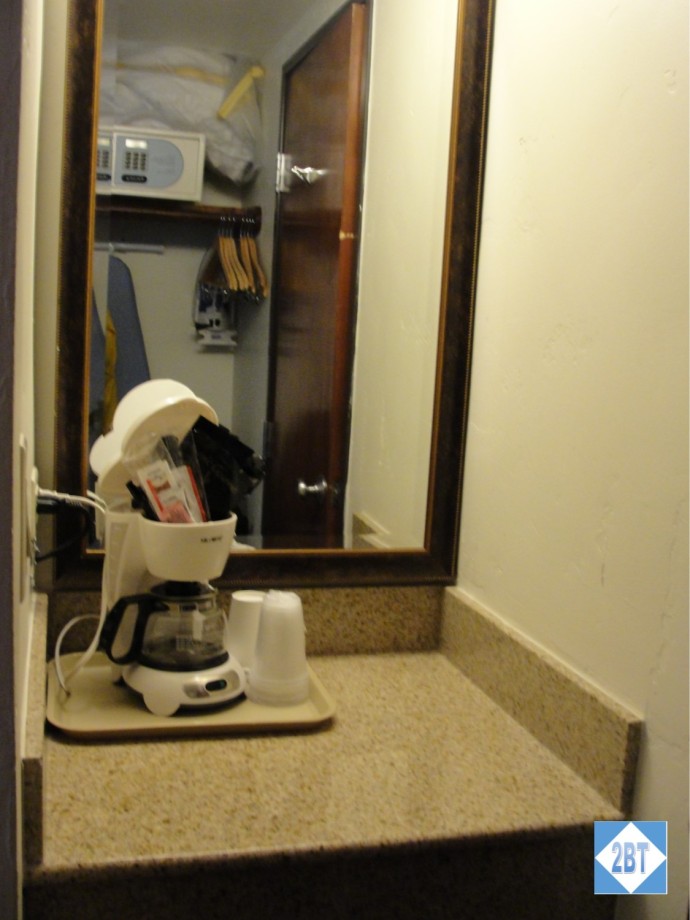 The water pressure in the shower was fine and I do like it when the shower curtain rod is bowed as that makes the shower area feel larger.  Nourish toiletries were provided.  I assume this is some sort of Holiday Inn brand but they smelled nice. 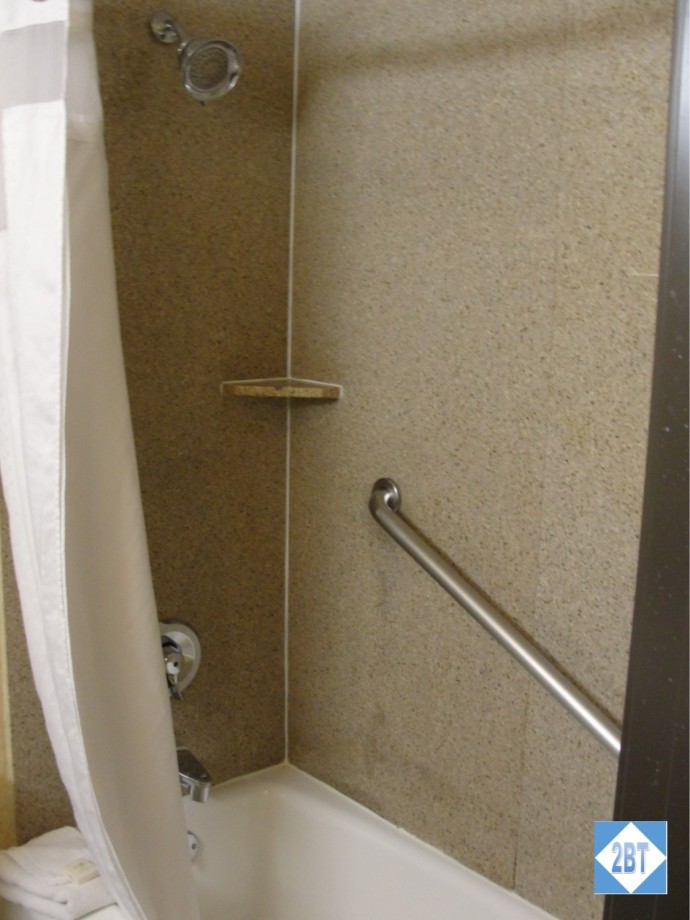 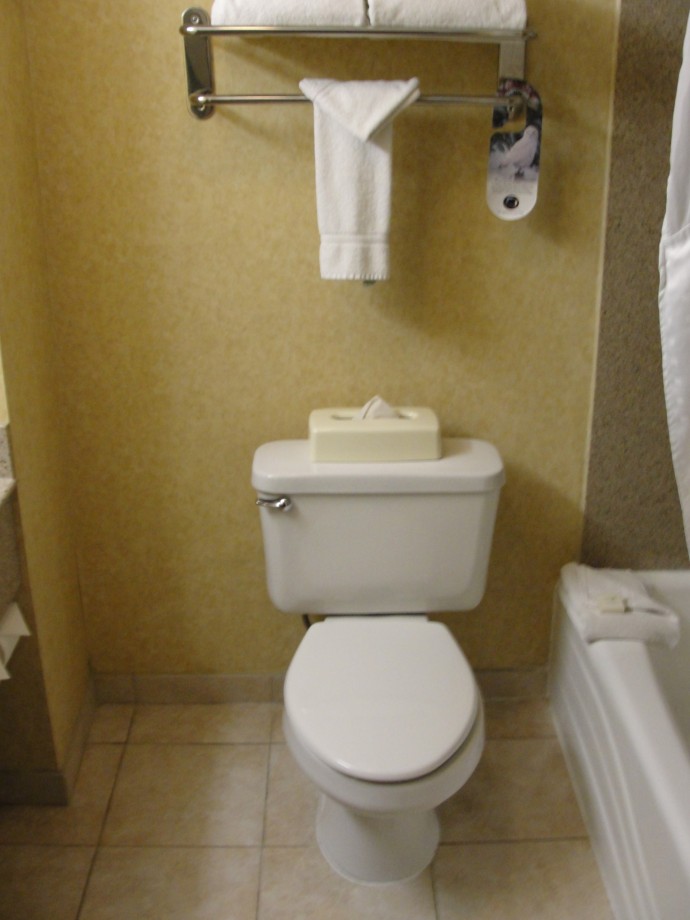 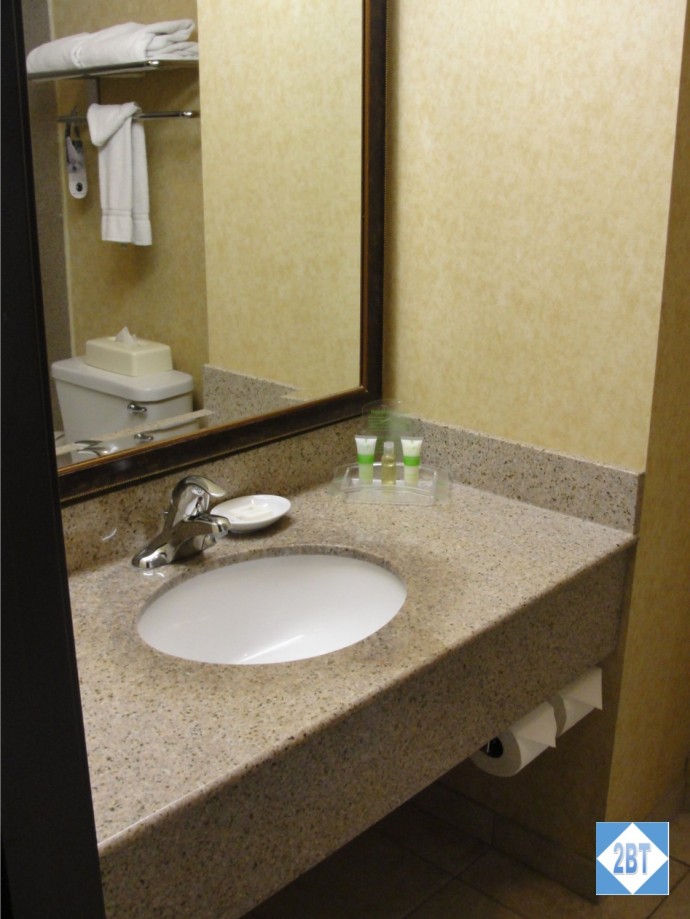 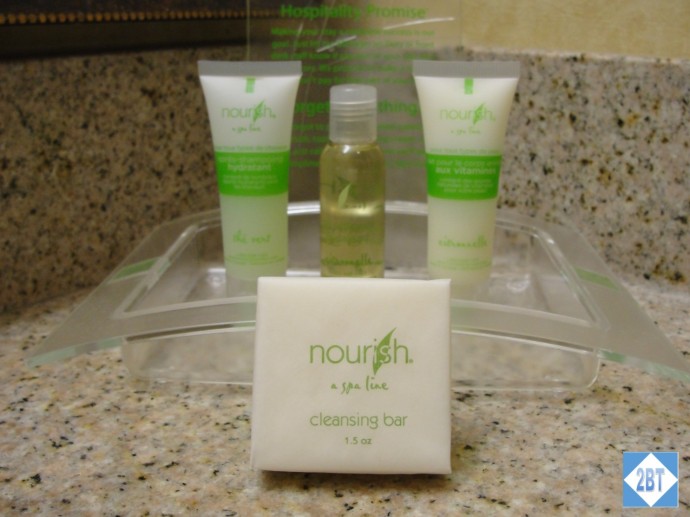 The room did have a safe on the shelf above the bar where clothes could be hung.  I hesitate to call it a “closet” because there’s no door.  But the safe was large enough to hold a 15″ laptop, which was nice. 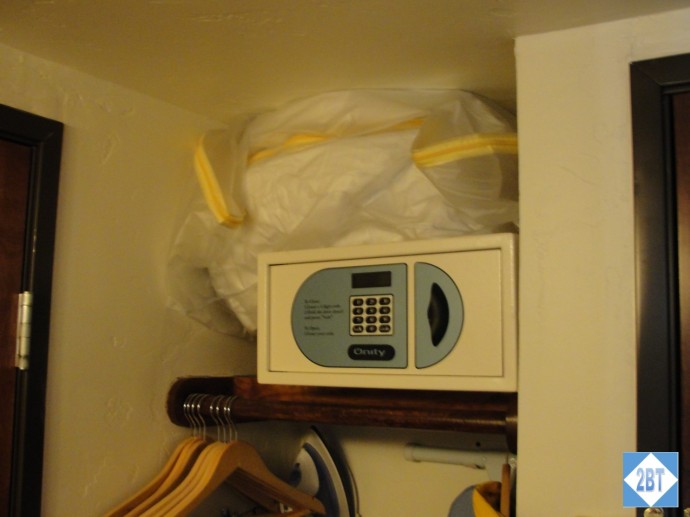 The safe above the clothes rack

We had a small balcony which overlooked the pool…and the construction trailers. While it didn’t keep us awake there was something that sounded like a generator running all night long and that sound was definitely audible in our room. 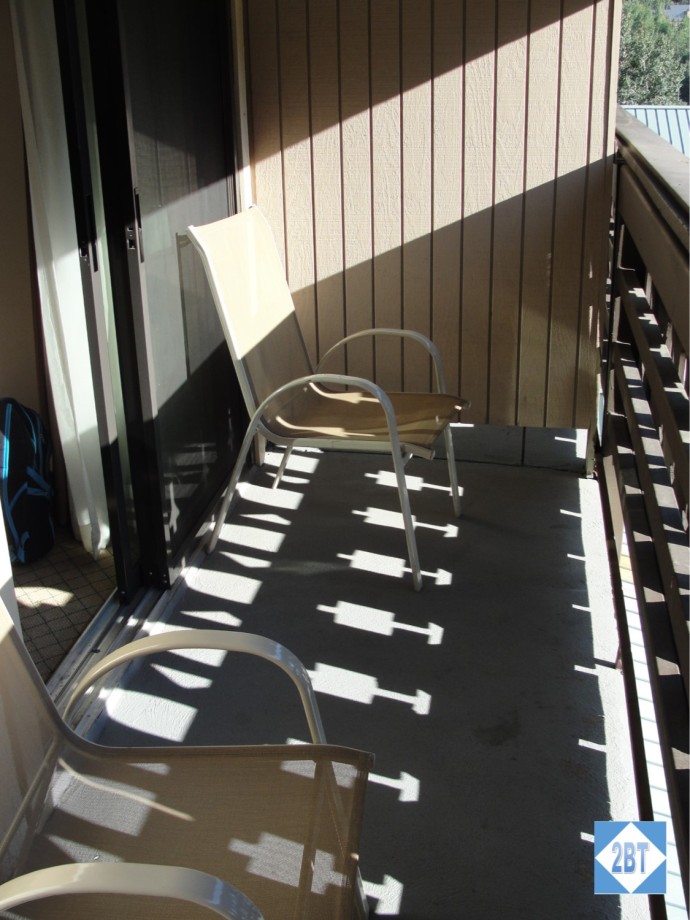 Two chairs on the balcony 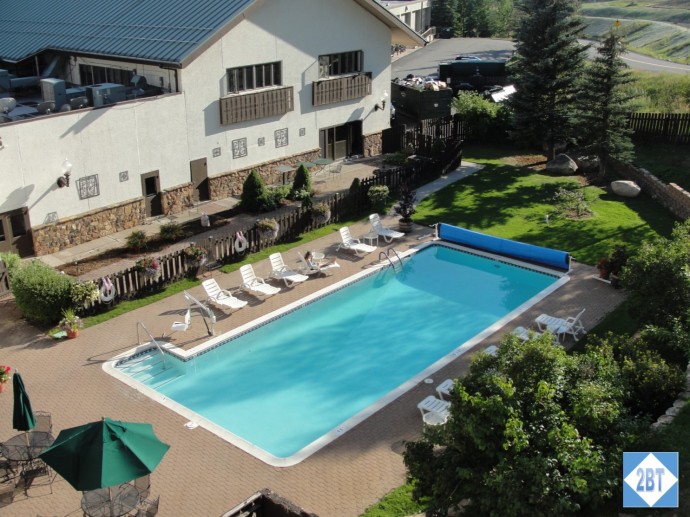 Our room overlooked the pool

We could also see the mountains

The hotel also had a small gym that we did not try out.  Several cardio machines, a universal weight rack and a few dumbbells populated the room. 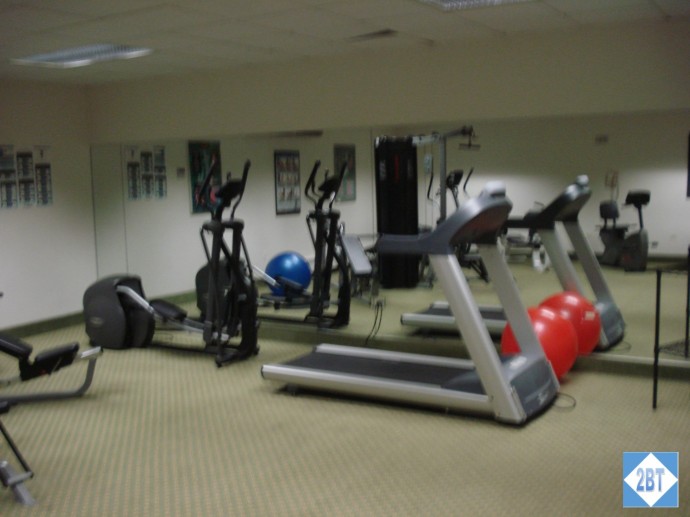 Cardio machines in the gym 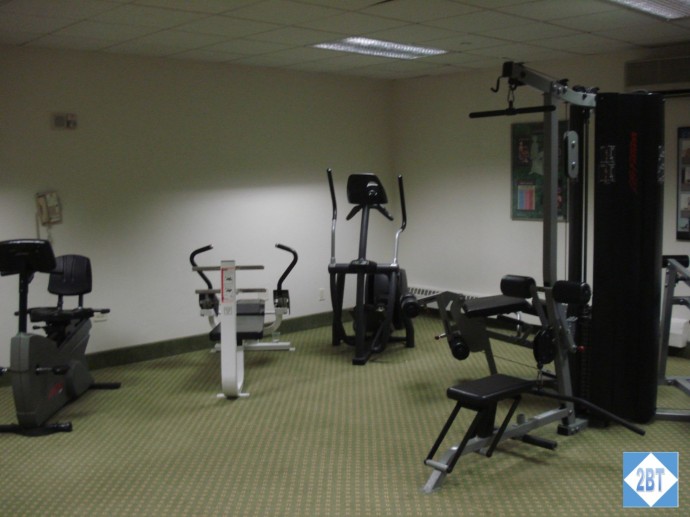 There was a nice area just off the lobby with comfortable seating and a glass-enclosed fireplace. Even in August the fire was crackling and it just added to the ambiance. This would be a nice place for apres-ski during the winter. Off the lobby there was a small business center with a couple of computers available. Also on the ground floor was the fitness room. It wasn’t large but could be a good place to warm up before hitting the slopes. 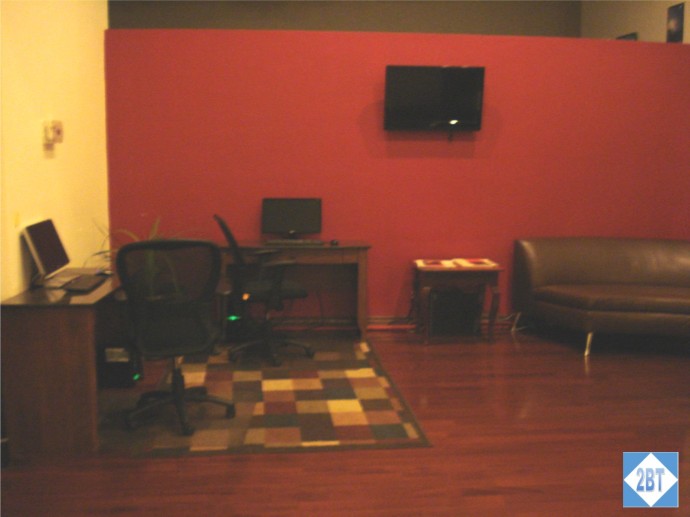 There were a couple of restaurants on site but we did not visit them.

For our purposes this hotel worked out just fine. But if coming during ski season I wouldn’t plan to have more than two people in a room like this as there is very limited space for all the gear required and it would be extremely crowded. But the location is handy and if the price works for you then it may be a good choice.