When you’re cruising on the ocean or a large sea, it’s common to have a “day at sea” which gives you a chance to catch your breath between ports of call.  A river cruise typically doesn’t offer one of those but may offer a day with fewer planned activities, which can be welcome in the middle of a busy trip.

By Wednesday we were a bit tired so it was rather refreshing to have a morning where we could take it easy.  Of course since our longship could not move to the next town, we had to take a bus for a couple of hours to Melk, where we boarded a sight-seeing boat for a lunch cruise through the scenic Wachau Valley, which is a UNESCO World Heritage Site. 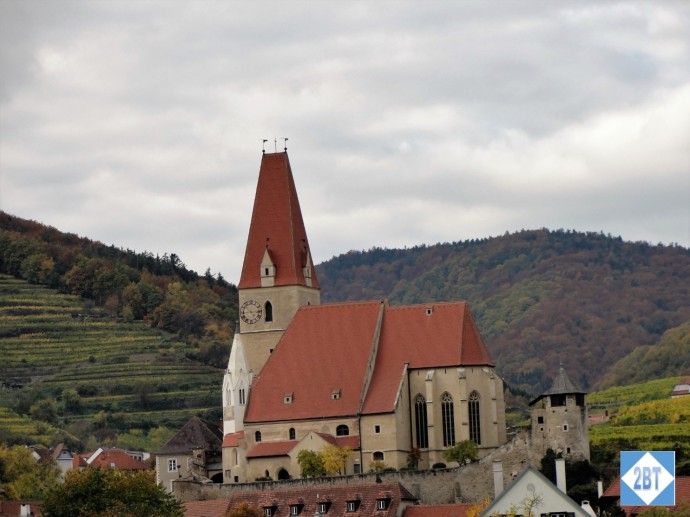 A church in the Wachau Valley with vineyards in the background

We saw ruins of castles (though not as many as on the Middle Rhine) and passed small towns and farms. 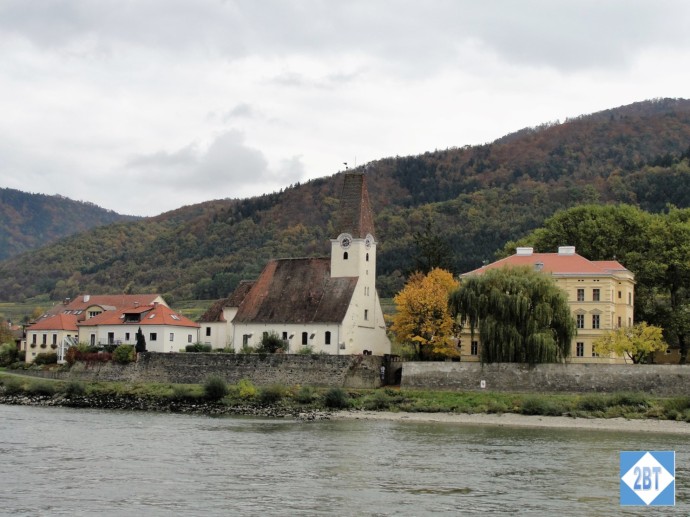 We docked in Dürnstein, where Richard the Lion-Heart was held captive by Duke Leopold V in 1193.  We didn’t see much of the town but did see the remains of Dürnstein Castle up on the hill and the Abbey Church of Dürnstein, also known as The Blue Church, for obvious reasons.  Between the church and the parking lot we passed vineyards with lovely white grapes that seemed ripe for the picking. 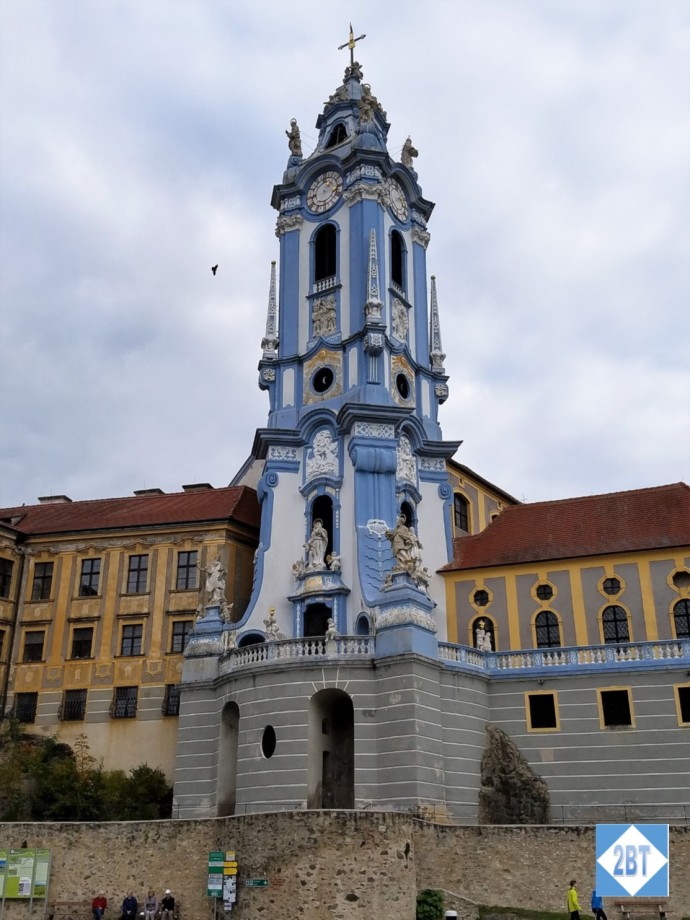 The Blue Church of Dürnstein

Back on the bus we were whisked up to Göttweig Abbey, which is up on top of a hill. The church was dedicated in 1072 and the monastery was founded in 1083. By the early 12th century the abbey was a famous seat of learning but by the mid-16th century it had no abbot and no monks.  A new abbot was named but then the abbey was almost entirely destroyed by fire in 1580.  But the new abbot rebuilt it entirely by 1604.  The abbey complex is a UNESCO World Heritage Site. 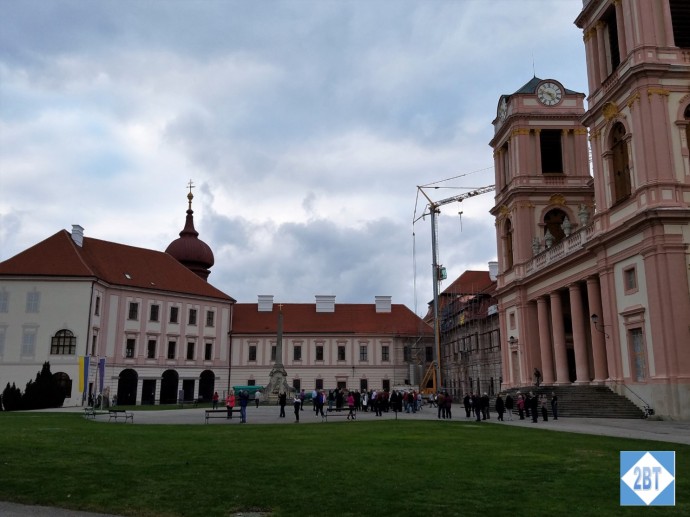 In 1718 a good portion of the monastery burned again and this time was rebuilt on a grander scale.  The new plans were so lavish that the abbot was nearly deposed because of it!  But it was during this period that its most famous work of art was installed.

The Apotheosis of Charles VI is considered a masterpiece of Baroque architecture.  It features Charles VI, Holy Roman Emperor (the same Charles whose presence is felt so strongly in Prague) as Apollo surrounded by various people and angels alike.

The Apotheosis of Charles VI dates to 1739

Sculptures surrounding the staircase underneath the frescoed ceiling

It was also during this era that the church itself was rebuilt.  In deference to cost-cutting measures required, even though both towers of the church feature clock faces, only one is a real clock.  The other is merely painted on! 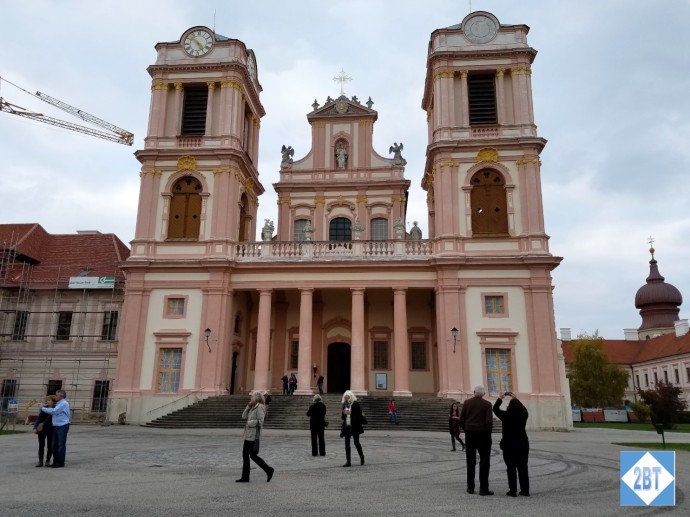 As it was a cloudy day during our visit and it was late afternoon by the time we entered the church, it was quite dark inside. 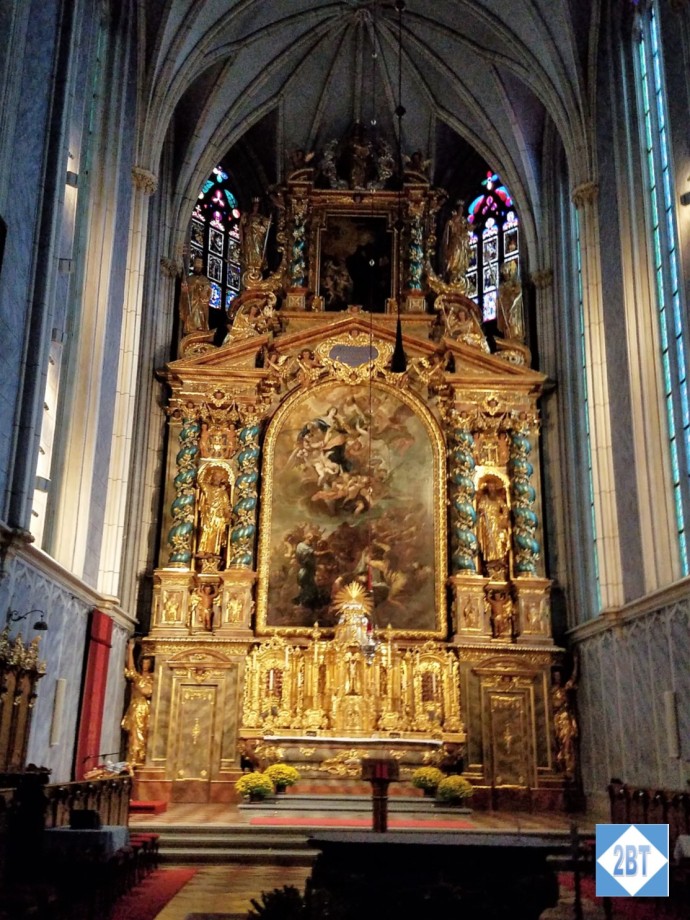 The high altar in the church at Göttweig Abbey 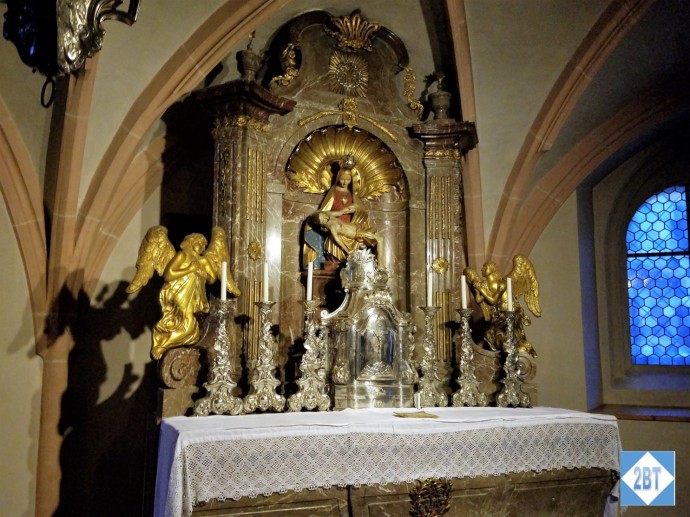 A small altar in Göttweig Abbey

Outside the abbey we were afforded lovely views of the surrounding countryside.  The monks grow apricots and the gift shop featured a number of locally produced apricot products. 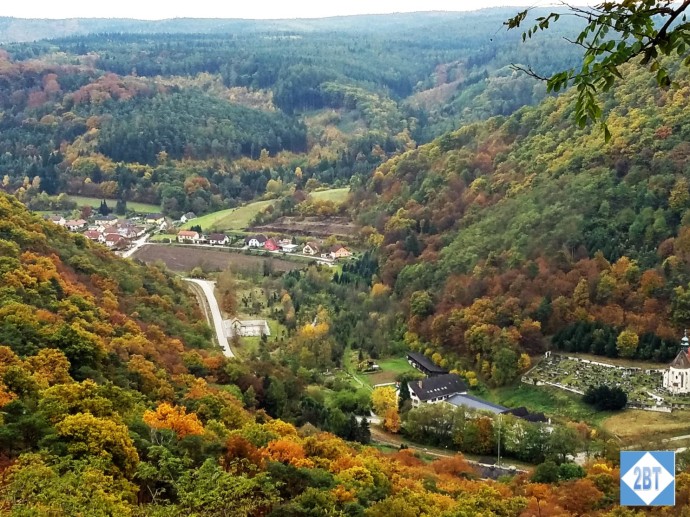 Our visit complete, we took the bus down to our new longship, the Bestla.  As the layouts of the longships were identical, the crew had taken our bags directly to our cabins and our keys were waiting for us there.  Unpacking was a snap since we knew exactly where we wanted to store our belongings.

Our cruise director, Ulrike, and our concierge, Poulina, came with us from the Njord to the Bestla.  They are actually part of the Bestla crew but had to pack up EVERYTHING from their cabins and bring it to the Njord, then take it all back to the Bestla once we moved back.  Of course the people fulfilling the same roles on the Njord had to do the same thing.  I felt sorry for them that they had to do that but it was nice to have the continuity crossing over from ship to ship.