We had booked our trips from the US to New Zealand and back from Australia before we had worked out our exact plans for what to do in between those dates. As it turned out we’d have been better served to go straight to Christchurch but since we had our flights into Auckland, we didn’t want to immediately jump on a flight to Christchurch in case one of our bags went missing or there were other travel delays. So I looked for an airport-area hotel for us for one night.

I tried and failed to find us a hotel room near the airport that had three beds. But since I had a free night with my IHG credit card and would get a second one a few months before we left, I was able to book two rooms at no charge.

I don’t think of Auckland as particularly tropical yet the area near the airport had palm trees and the hotel grounds were quite lush. The yellow shuttle bus (more on that below) dropped us off right at the front door. 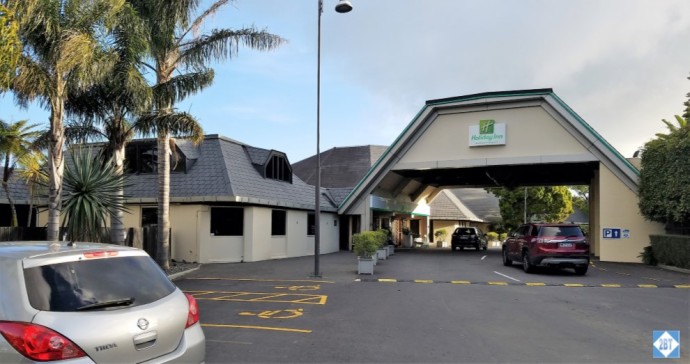 We were fortunate to arrive shortly before a large group and barely had to wait to check in. My platinum status was noted…but platinum status isn’t worth a whole lot in the IHG world, not even for free breakfast. During the check-in process we were made aware of the hours of the restaurant and bar. The restaurant is open for breakfast 0530-1000 and until 2130 for dinner. The bar is only open until 2200, which I found a little odd – but perhaps there’s no demand for it to be open longer. Most folks I saw were either at the hotel for a business meeting or, like us, were there because it was convenient to the airport.

The hotel has only two floors but is in a number of interconnected smaller buildings, all of which are offset just a little bit. Looking at the design on Google Maps it appears to be intentional. 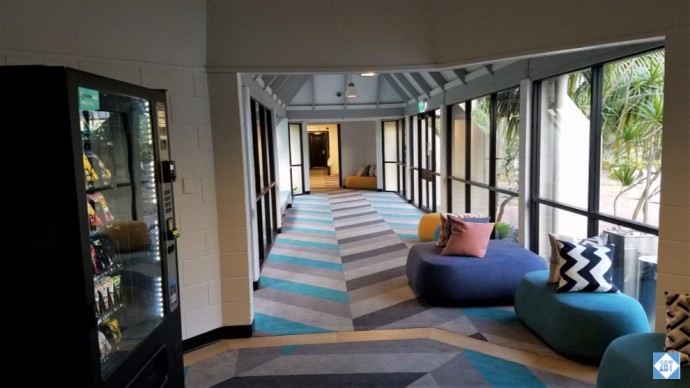 …and the extra-large chess set. 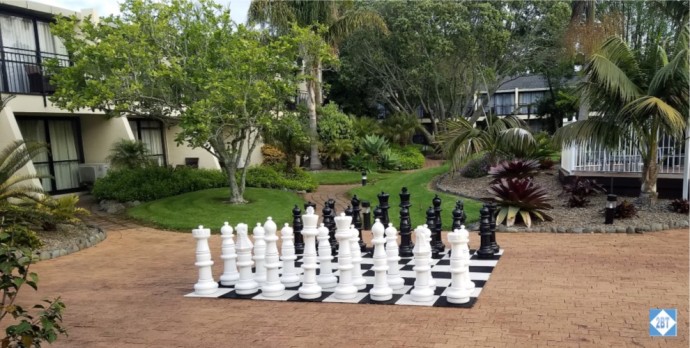 Once through the breezeway it was a short walk to our rooms. While we’d asked for rooms close together, since we needed one of the rooms to have two beds we ended up around the corner from each other which was fine.

The room was typical with a bathroom immediately to the left upon entering and then the room opened up for the bed area. 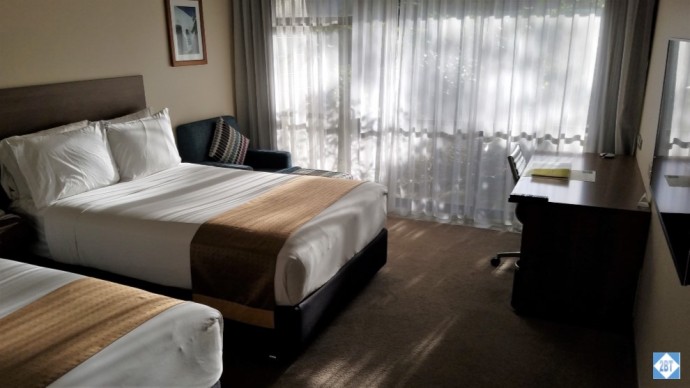 Our friend with the single room had the exact same layout except she had a king bed with a chaise longue.

The rooms were a little musty but at least the air conditioning worked to take care of that. The decor was a little dated but for a one night stay, we really didn’t care as we just needed a good night’s sleep.

Across from the beds was a desk and chair, with a wall-mounted TV beside it.

Back by the door, across from the bathroom was the giant piece of furniture that housed the mini-bar, coffee and tea setup, drawers, closet, safe, etc. We used the center portion as a luggage stand for one bag while I used the actual luggage stand out in the room.

The bathroom was basic but perfectly functional. Only one sink but loads of counter space.

Toiletries were SOAK brand, which I believe is made for IHG.

A tub shower was across from the sink. The shower had good hot water though the spray was somewhat wimpy. 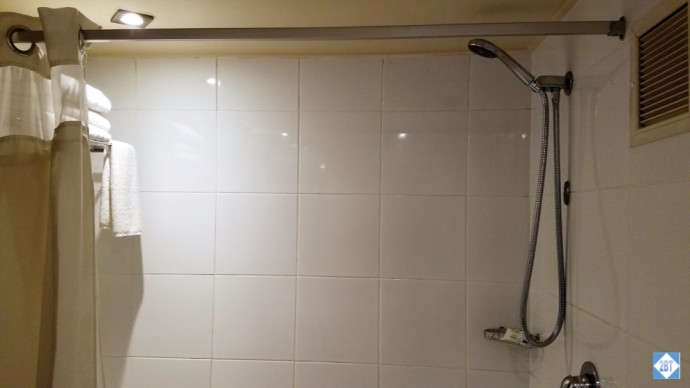 The hotel does have a bigger-than-I-expected gym on the second floor. As noted earlier, there’s a pool in the area directly behind the bar and restaurant. 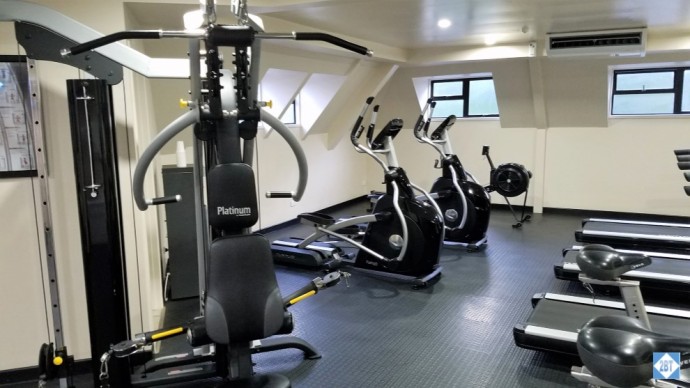 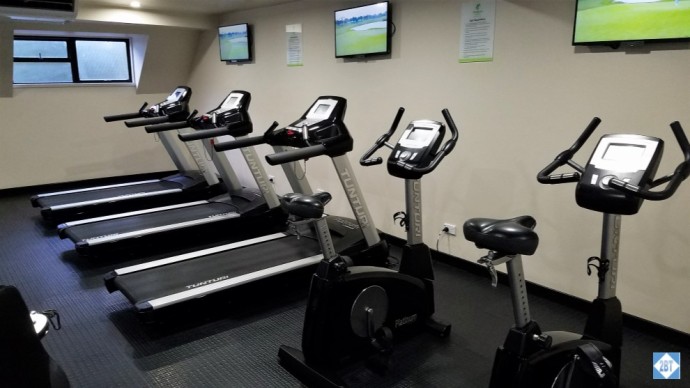 We had dinner in the hotel restaurant just because the hotel is on a busy street and we didn’t see anywhere else to eat (except for other hotels) in the immediate vicinity. I don’t know if we were just unlucky or what but our server was very slow and absolutely disappeared when it was time for us to pay the bill.

That wasn’t an issue with breakfast as you could choose from the full buffet, the continental (cold) buffet or a limited menu so if you chose one of the buffets you just served yourself. That was definitely the way to go.

The hotel doesn’t have its own shuttle bus but it is one of the hotels served by the Yellow Bus. To get your ticket for the Yellow Bus, exit the airport and go to the next traffic island where you’ll find an automated kiosk that sells Yellow Bus tickets. The bus runs approximately every 30 minutes. It’s only $6 NZD each way so that’s a bargain. We were able to buy round-trip tickets in advance.

This worked out quite well for our needs. There was a small conference going on while we were there and a tour group arrived shortly after us so it’s popular with groups. If I needed to stay at an airport hotel again, I’d be happy to stay at this one.