We left Auckland just a day after landing, flying Air New Zealand to Christchurch.  Wow, domestic travel in NZ is so much like it used to be in the US.  Nobody checked my ID.  I checked my bag myself. I did go through security but it was much less intrusive.  It was so nice!  The flight is blocked at 1h 24m but it seemed to arrive much more quickly.  The plane was a single-cabin A320 and as cheap as tickets were, this seems to be a very common way to jump between cities in NZ.

The biggest challenge I face when booking travel with two friends is that we prefer to use points for travel and we each want our own bed. I tried everything I know of to find a points-friendly hotel where we could have three beds and it just wasn’t happening. It’s hard enough to find in the US and much tougher abroad. Even suites – which would have enough room for a third bed – seem to provide only a king bed and not one that can be split apart. We could have booked through the Chase Ultimate Rewards (UR) portal, the Amex Membership Rewards portal or the Citi ThankYou Points portal or even redeemed points against my Barclays ArrivalPlus but in the end we decided to use cash. That would allow the birthday girl to pay and earn UR points from her Sapphire Preferred card which would help to offset the points she used buying her plane ticket to New Zealand.  The room was less than $200/night USD all in so with each of us effectively paying for a night, the price wasn’t bad at all.

I used Trip Advisor as a starting point and narrowed the list down to about 8-10 places that fit our criteria. I then started weeding places out based on reviews before presenting a list of about 4-5 places to my friends. The birthday girl ended up choosing The Pavilions. I was a little skeptical of how this would work but things turned out quite well.

The hotel is family-owned and has been around quite awhile. It was raining the day we arrived and our room was in a building behind the main one. Fortunately a staff member helped us with our bags and guided us through the correct wing of the main building to make our dash across the parking lot as short as possible.

Our room was a bit odd-shaped, curving a bit to the right. Entry was via French doors into the den where we had a sofa, a love seat and a console that held the well-stocked mini-fridge and drawers with the coffee and tea supplies as well as snack items. A flat screen TV was mounted on the wall above this console. The carpet was dark brown as were the sofa and love seat and while I’m sure this is great for hiding stains, it made the room seem smaller and a little depressing, despite the fact that the walls were white. The sofa definitely needed to be replaced as we sank down quite far into it each time we sat. It was less of an issue with the love seat but the way it was positioned (and really, its location was the only place it fit in the room) it was hard to watch the TV from that vantage point. 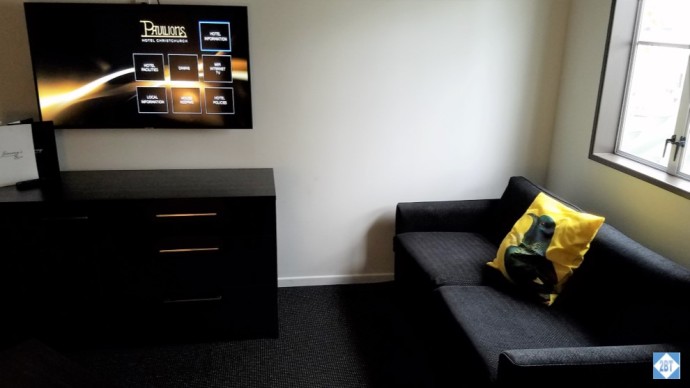 The mini-fridge was packed full – so full that when we bought breakfast items that needed to be chilled, we had to rearrange everything to have enough room.

Just beside the sofa was a table with three chairs. That worked great for us but seemed odd for a room that could technically sleep four people. 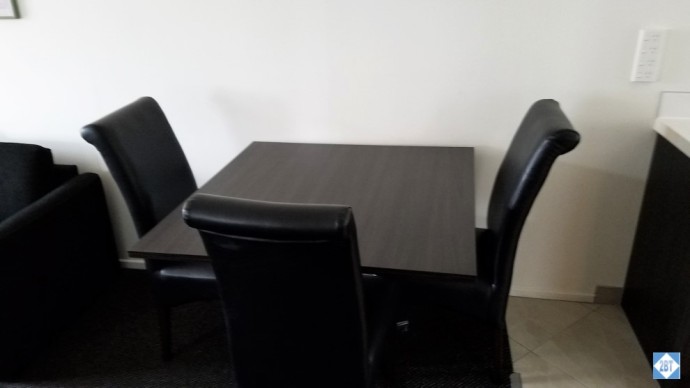 The small kitchen had a sink, a two-burner stove and a microwave, which was really all we needed.

Our two bedroom unit had one bathroom with a sink, toilet and shower stall. It was on the smaller side but was ok as long as only one person was in there. The shower stall was decent sized and did have a shelf that ran the full width of the stall. However, it was positioned along the top of the panel that included the stall door. While none of us had trouble reaching it, I can see it would be quite difficult for children or shorter adults. The bathroom had a towel rack with all our towels on it but once they were damp we really needed hooks or other racks for both the towels and our washcloths.

Toiletries were by Vertu. They worked well enough.

The master bedroom was not exactly spacious but the lack of furniture made it feel larger. A built-in nook for hanging clothes was next to the bed. The safe was down on the floor which was really inconvenient.

The second bedroom was small and shaped oddly. One bed was tucked back in an L of the room while the other was against the opposite wall. A huge wardrobe was in one corner though one half of it was locked. The side that was open was quite narrow. Luckily we didn’t have a whole lot to put in it.

The hotel does have a guest laundry which we made use of on our last night. There are a couple of restaurants, one more formal, and one outside the bar area. The bar area is quite quirky with mannequins representing members of the family that owns the hotel along with what I’d call Americana items if this hotel were in the US. Think of items like you’d find on the walls in Cracker Barrel in the US.

In the back was a very small pool.

A small hot tub was beside it.

The staff were generally very nice although we didn’t have a whole lot of interactions with them.

The hotel has a nice location, in easy walking distance of a few restaurants, a sports bar and a grocery store inside a mall. It’s also close to the botanic garden and from there we were able to walk into the city center. Whether I’d stay here again would depend on the bedding configuration I needed. I’d rather be at a points-earning (or spending) hotel in a prime location but given the constraints we had with bedding, this was a perfectly acceptable alternative. It was popular with tour groups so advance reservations would be a good idea.

#TravelTuesday photo: a bust of #Beethoven in the garden of his home in #Bonn, #Germany 🇩🇪