I hadn’t planned on spending the night in Dallas.  But after the delays in flying out of Aspen, I arrived at DFW too late to make a connection to Memphis, so I had no choice.  While on the plane waiting for boarding to complete in Aspen, I used the Hyatt app to book a room near the airport.

I had spent a night at the Hyatt Regency DFW in October 2015.  I thought about booking a room at the Grand Hyatt since it’s connected to the terminal.  But since I knew I’d be paying for this stay out of pocket I opted for the Hyatt Place DFW.  It’s a fairly new property, having been open just less than a year.

In general, I love Hyatt Places because I love their consistency.  I know I’ll get a large room with a separate seating area, good wi-fi, an airport shuttle and free breakfast – things I value highly.  This hotel was no exception.

My flight landed in Terminal B and I called the hotel from baggage claim.  Their shuttle picks ups at either end of the terminal so I scooted down to the B1 end of the terminal where I found two others waiting as well.  The shuttle arrived in less than 10 minutes, which was great since I’d already had a long day.  Fortunately ours was the last pickup before heading towards the hotel.

On arrival, I was able to go directly to the check-in desk since I only had two small backpacks.  Fortunately I’d planned for the possibility I might get stuck getting out of Aspen and one backpack contained clean clothes and personal grooming items.  Yay, me!

At the front desk I was greeted by Mary, a grandmotherly-type who called me “hon” and welcomed me “home” after noting my Platinum status.  Normally being called “hon” is not on my list of favorite things but after my long day, being welcomed “home” made me feel like I really was home.

I was assigned room 504, which was near the end of the hall. 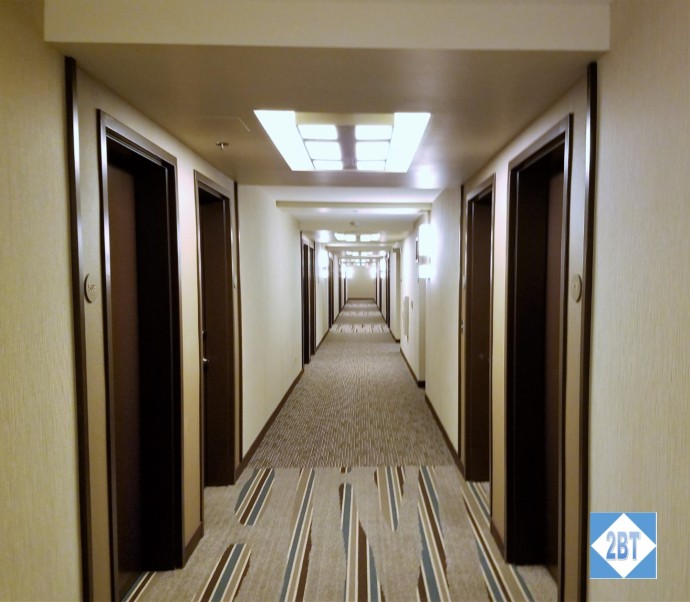 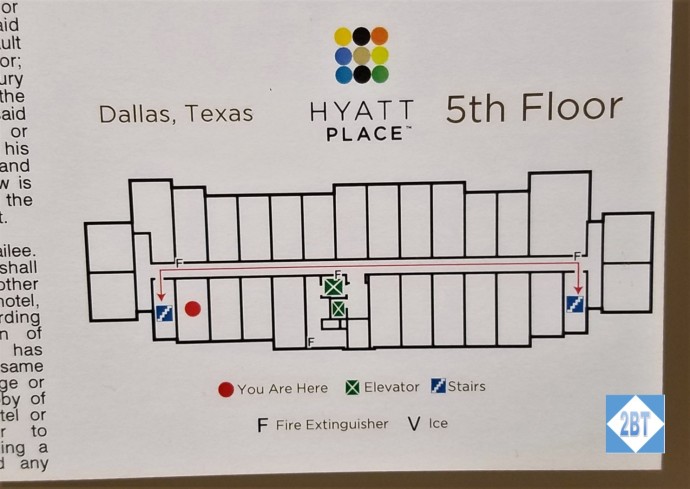 Location of Room 504 at the Hyatt Place DFW

When I opened the door I found exactly what I expected.  To the right was the bathroom with a sliding frosted-glass door and beyond that the roomed opened up into a sitting area with a desk on the left and an L-shaped couch on the right.  Beyond that was the king-sized bed, a chest with a TV and the wardrobe.

The view wasn’t much to look at but this is an airport hotel, after all.  The blackout curtains did an excellent job keeping out the light.

The bed was big and comfortable and after sleeping in a twin bed for the last several days, it felt huge. And good.  I loved that the nightstands had two plugs on each side as I like to plug in both my tablet and my phone beside the bed.

Across from the bed was the wardrobe – which I didn’t even open – and a chest, over which was a wall-mounted TV.  The chest had three drawers and a door that concealed the mini-fridge. 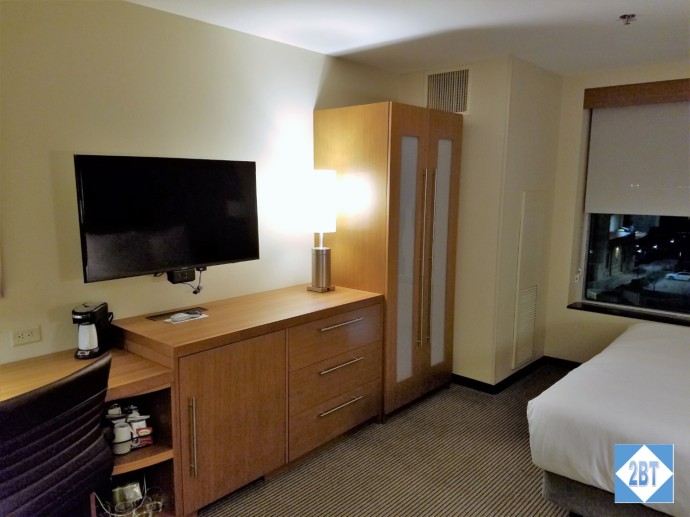 Beside the chest was a desk and on it was a note and my welcome amenity: an apple and a bottle of water.  The note was good for another bottle of water or a free beverage from the restaurant downstairs.  Sadly I could not make good use of this.  While I did eat dinner in the restaurant, I didn’t want anything but ice water to drink.  I don’t drink alcohol so that was not helpful.  And the last thing I needed was caffeine to keep me awake.  Even the next morning I wouldn’t have been able to finish a soft drink before we left for the airport so I just skipped it.

I didn’t use the couch much at all on this trip except to sit while putting on my shoes the next morning but it was as I’d expect.  I love the large padded ottoman that is standard instead of a coffee table.  It can be used in either fashion, depending on each guest’s needs.  I set my backpacks down on the sofa and the ottoman so I just used them for storage.

As I mentioned above, the bathroom was just inside the hallway entrance and had a sliding, frosted-glass door.  This is fine when only one person is staying in the room but if there is more than one person and someone has to get up in the middle of the night, the light from the bathroom will flood the sleeping area with light.  I recognize it makes the room seem larger but sometimes practicality needs to override aesthetics.

The bathroom itself I liked quite well.  There are two light switches: one for overhead and another for the set of fluorescent lights around the mirror.  There’s ample storage area on top of the sink and the shelf beneath it held only the hair drier (which worked well). 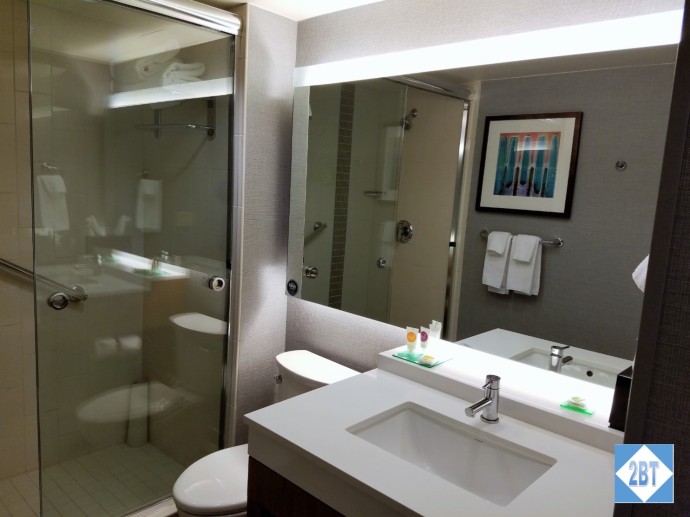 Toiletries were the standard for Hyatt Places: Barney Kenet MD.  I noted that only shampoo, conditioner and two small bars of soap (one for the sink, one for the shower) were provided.  I asked the front desk if lotion should have been included and was told it should not have been but they’d be happy to provide it on request, which it was.  I found that strange but am sure there is a good reason, I assume to do with cost-cutting.  I do wish the bath soap was not a bar but a squeeze tube so I could take it with me.  Especially on one-night stays I feel like I’m just wasting it by using it one time. I hope Hyatt recycles these left-over bars.

This room had a shower stall with easy-to-use sliding glass panes.  It was nice and large and I loved that the shower head could be adjusted to a pulse mode.

I wasn’t crazy about the tiny shelf.  Yes, it was large enough to accommodate the small bar of soap, the shampoo and the conditioner – IF you balanced everything properly.  But that left nowhere else to put my razor and shave gel except to set it on the shower floor.  As I get older, the less often I have to bend down that far, the better!  So a second shelf or even making this corner shelf larger would be a very good idea.  It would have been great if there had been some kind of raised step at the back of the shower to make leg-shaving easier as well.  This is a common complaint of mine and one reason I generally prefer a shower/tub combo vs. a shower stall.

The hotel has a small indoor pool.  For some reason I couldn’t get the door open so this photo is shot through the glass.  I did wonder if there was an outdoor version as well but did not explore further to find out. 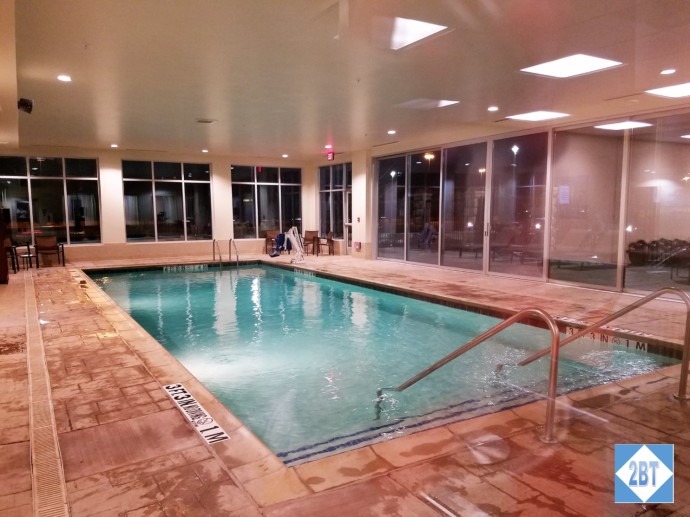 The exercise room is quite small but had a few cardio machines and a full array of hand weights.

As with other Hyatt Places the lobby doubles as a dining area for breakfast (or anytime, really) so it’s quite large and airy.  On one side is more of a sitting area, not meant for eating but more for lounging.  Tucked in back is the business center with both a PC and a Mac, each connected to the printer.

Past the front desk is the cafe area where I had a late dinner.  Despite not eating more than cookies on the plane, I wasn’t starving by 9 PM but knew I needed to eat before breakfast.  They offered a soup ‘n salad combo that hit the spot for me.  The tomato basil soup was hearty and filled me up while the chicken Caesar salad was light and refreshing.

The following morning I was back downstairs for breakfast.  Along a wall in the cafe area was an entire self-serve bar dedicated to coffee and tea.  I didn’t look at it closely as I wasn’t having either. 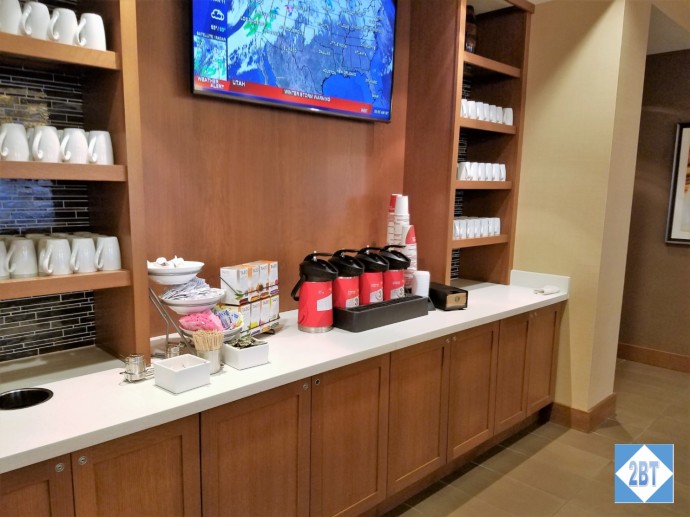 Through an archway was the breakfast buffet, which contained the usual complement of breakfast foods: a toaster with toppings for your break, pastries, a hot section with bagel sandwiches, bacon and pancakes, fresh fruit available as both carry-out (apples, bananas) and for dining in (grapefruit, melons, peaches).  Several types of yogurt were available as was oatmeal with toppings.  Single-use cereals were on display and an array of milks and juices were on hand as well.

Beside and behind the buffet area was more seating and there was even an outdoor patio with a fireplace.

Even though I booked at nearly the last possible minute I thought the rate was very reasonable $130.  This member rate was even cheaper than the AAA rate I’d been planning to use.  I wish I could have compared it to my corporate rate but I failed to bring along our corporate discount codes.  Won’t make that mistake again!

I also failed to bring along my Hyatt credit card and it is not the one on file with my account.  I did have my Chase Sapphire Reserve card, so I earned 3x points for each dollar spent as this fell into the Travel category.  By holding the Hyatt credit card I earn a free night at any category 1-4 hotel but it did not even cross my mind to use that certificate here.  I’ll save that certificate for a hotel with a higher room rate.

In short, I really liked this hotel and think it can be an excellent alternative to either the Grand Hyatt or the Hyatt Regency that are on the airport property.