For the second consecutive year I found myself back in New Orleans just before Labor Day for an event at the Hyatt Regency. Last year I stayed at the Regency but this year a friend was coming with me and we were going to stay over for a couple of days to play tourist. As I started comparing prices, and knowing we’d need breakfast, I realized we’d be better off at the Hyatt House which is next door to the Regency but is connected by a walkway.

We stayed three nights here, using a combination of cash, the free night certificate that comes with the Chase Hyatt credit card and World of Hyatt points. I called in to make the reservation and got a fantastic agent who compared my corporate rate, member rate and the AAA rate to figure out which night was the cheapest so I could pay cash for that night and use the certificate and points for the other two night. Then she was able to put that all on one reservation for us, which was terrific. I’d hoped for a room with two beds, but none were available on points so we got a room with a king bed and a sleeper sofa.

The building housing the hotel is at the corner of Loyola Ave and Poydras Street, with the hotel occupying floors 11-17. The Hyatt House entrance is on the Poydras Street side and there’s an express elevator up to the 11th floor main lobby.

As I arrived after 10 PM there was no waiting to be checked in and the whole process was quick and efficient. Every staff interaction I had was very pleasant. My Discoverist status (a result of holding the Hyatt credit card) was recognized and I told I was being given a slightly larger room. I asked again about a room with two beds, just in case one had opened up, but none were available. I was offered a choice of two of several welcome amenities and I took the 1000 points plus a plate of fruit. I was also given a large bottle of water, and one was available each day per guest.

One large bottle of water per guest per day is complimentary

I was directed to my room, 1299, which was just one floor up. The main elevator lobby for the hotel is different from the express elevator to the street. Upon exiting the elevator I started to follow the signs to my room. The sign indicated rooms 1270-1276 to the right and 1292-1299 to the left. Now, call me crazy but I assumed that meant I was walking to the end of the hall. But after passing 3-4 doors I noticed the room numbers were getting smaller, not larger, and had to backtrack. For some reason, the highest room number on the hallway was in the middle of the hall. That one left me scratching my head.

As expected, one enters into the kitchen and beyond that is a living area on one side and the bed on the other. There are night stands on either side of the bed, each with lamps and two electrical plugs, which is perfect. In the corner of the room was a drawer with three chests. I used the top of it as a luggage stand.

The sofa is an L-shape with the bed folding out of the longer leg. There were two moveable, cushioned cubes in front of the sofa. These could be a coffee table, seating or even a makeshift luggage stand. 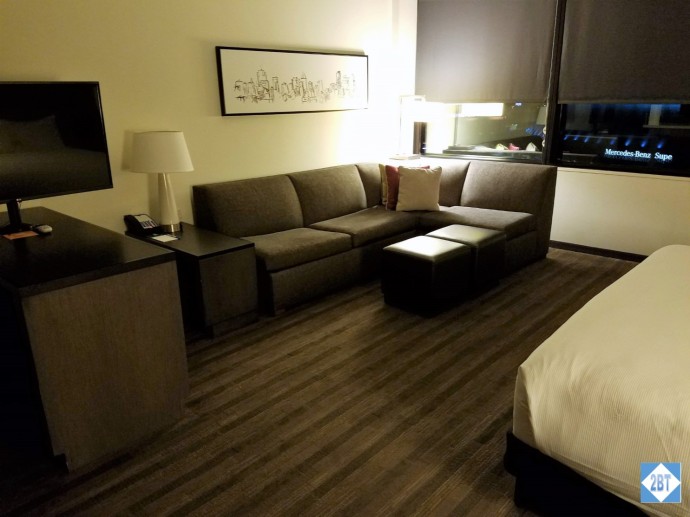 Beside the sofa was an end table with a lamp. Just beyond that, acting as a divider between the kitchen and living areas was a cabinet with some shelves and the swiveling TV sat on that.

The closet was between the bed and the bathroom and considering that Hyatt Houses are more extended-stay hotels, I was a bit surprised at how small it was. But there were quite a few coat hangers, a true luggage stand, an iron and ironing board and the lines for the sofa bed.

The room did need a bit of a makeover. The brown sofa, brown carpeting, brown flooring in the kitchen and brown backsplash on the kitchen wall all make the room feel a bit closed in. This despite the fact that the ceiling really opens up over the living area. The sheets for the sofa had rips in them and the blackout curtains for the center window had apparently gotten off track several times before because the edges were frayed on one side. I did mention this and maintenance did get the curtain back in the track but it still wasn’t a smooth transition when raising or lowering it.  And on the topic of linens for the sofa bed – it could really do with a heavier blanket as the a/c vent blows right on that bed.

The bathroom was pretty large and there was enough counter and shelf space for both mine and my friend’s toiletries. There’s an additional light that wraps around the mirror that really brightens the room and would be helpful as a makeup mirror. The bathroom door had a full-length mirror on the outside, so there was no shortage of ways to check your look.

My one complaint about the toilet was the location of the toilet paper. It was on the same wall as the toilet which meant you had to reach back behind you to get the paper. A free-standing dispenser would be the way to go here. 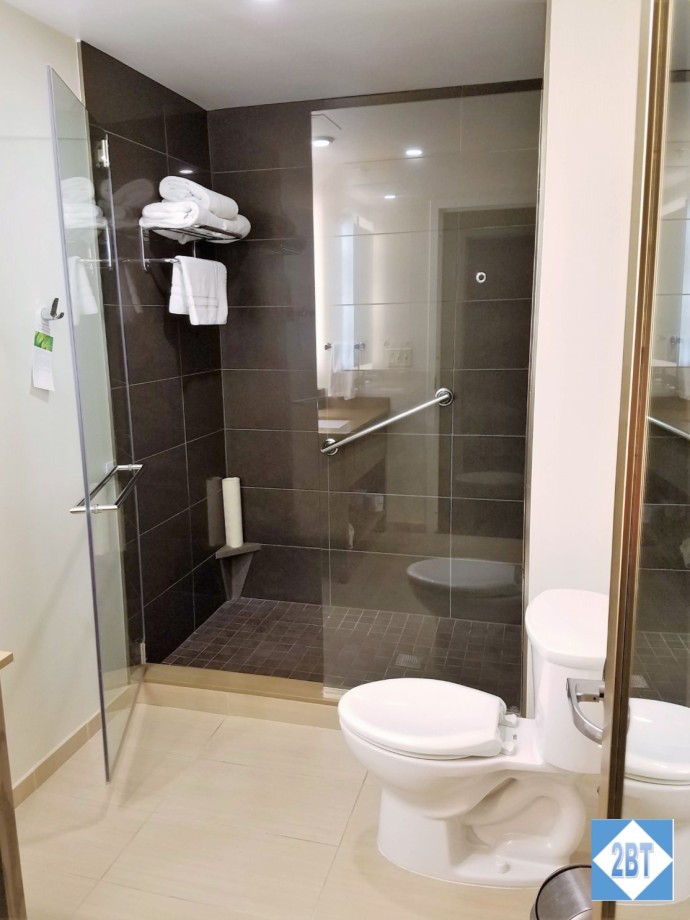 I really, really liked the shower. I like a strong spray and this shower head was adjustable enough to give me one. The soap dish could stand to be larger because by the time you put the bar of soap and tubes of shampoo and conditioner on there it’s crowded. My friend brought her own shampoo/conditioner combo and it became a balancing act to get everything to stay put.

This shower had something I’d whined about for awhile now but had never actually seen before: a small, low shelf in the back corner. Finally, a place to rest my leg while shaving! It would have helped if it were a little larger so my foot and the can of shaving cream and extra razor could all be on it at the same time, but, baby steps. I was thrilled to see this.

Toiletries were Kenet M.D., which is the standard for Hyatt House and Hyatt Place. I do wish they’d get rid of the bar soap for the shower and replace it with shower gel.

The room had a view of both the Superdome and the Smoothie King Center as well as the pool.  I also liked that the thermostat allowed me to get the room quite cool overnight.

The kitchen was compact but had a stove and a small refrigerator/freezer. While it didn’t have a proper table, it had a tall counter with chairs on either side. One chair was like a tall office chair so this workspace doubles as the desk. The mini-fridge was tucked under one end of the counter. There was no conventional oven but there was a microwave and a cooktop along with a dishwasher. 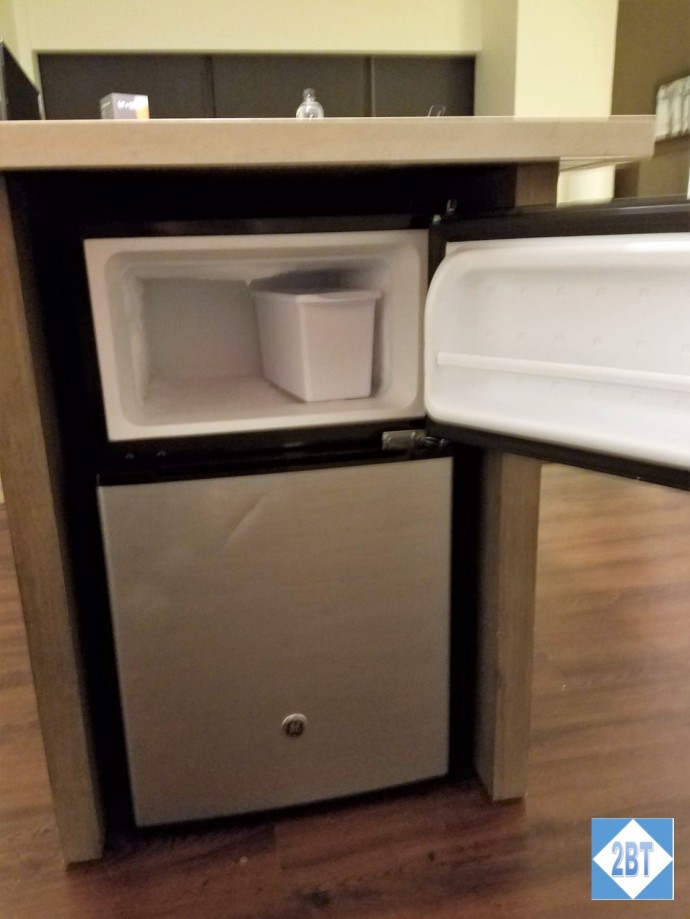 One of the documents left on the counter was a schedule of breakfast offerings for the week. I suspect it’s the same each week but the omelette was different each day and included some vegetarian options as well. 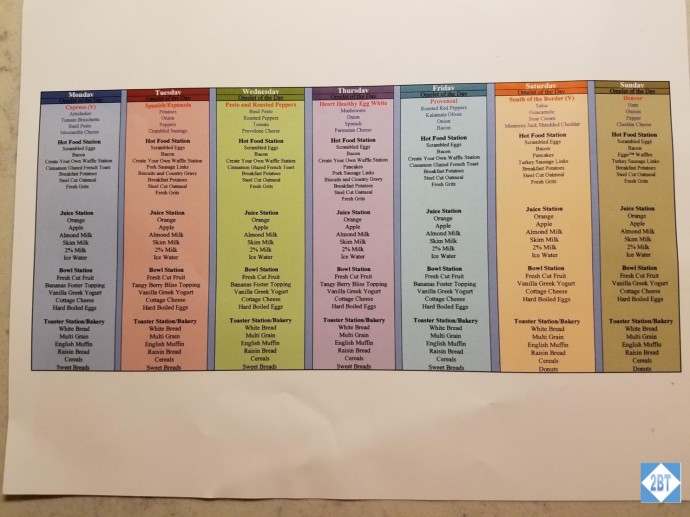 The breakfast buffet is not extensive and those with a discriminating palate may be disappointed but what’s offered here is perfect for me. Hot items, cold items and plenty of beverage choices just confirmed to me that I’d made the right decision here vs. staying at the Regency.

There’s a fairly large seating area near the bar though I think I only saw one person there during my stay. The seating area for breakfast also includes the bar area and the tables are numbered so they know where to deliver your omelette order.

We ordered take-out from the bar one night and, for hotel food, it was pretty good and not outrageously priced.

There’s a pantry area with a fridge/freezer combo and beside that are shelves with multiple types of snacks. 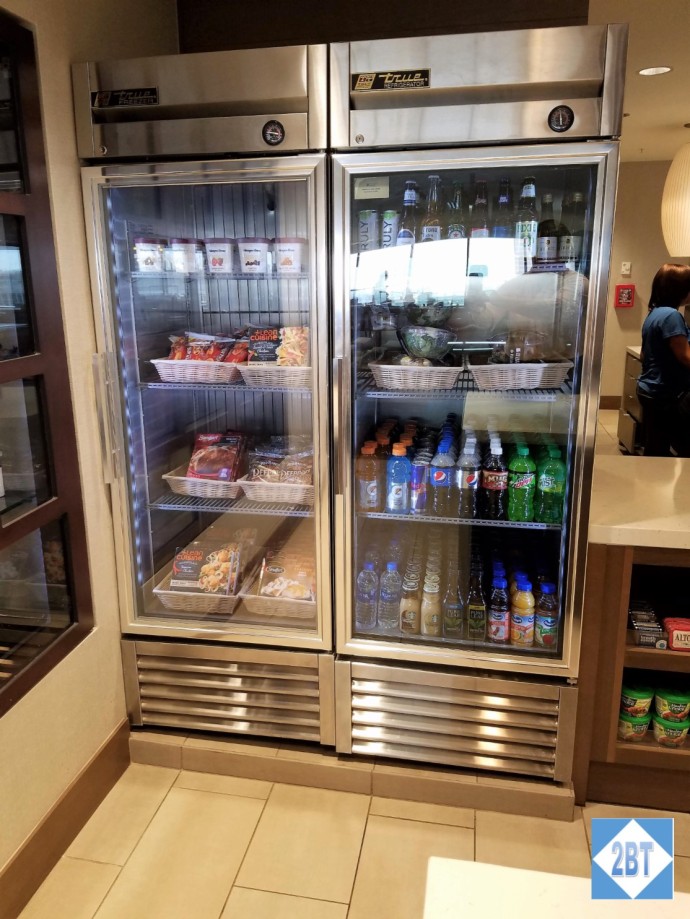 There’s a small business center. The monitors do have USB drives which allowed me to email some photos from my camera.

The gyms were super-small. There are two of them, right above each other on separate floors. There are three cardio machines and a bench with a full array of hand weights. I also saw a step and a ball in the corner of the room. I don’t know if HH guests are allowed to use the gym at the Regency but it’s MUCH bigger and has a lot more equipment.

The pool, also visible from our room, is shared between the HH and the Regency. Reaching it is an adventure, though. One takes the elevator to the second floor then walks along the connecting hallway to the Regency. From there one takes the elevator to the fifth floor and out to the pool. Not so bad on the walk over but not much fun walking back all that way when you’re wet.

This hotel is super-convenient to both the Smoothie King Center and the Superdome. While it’s not exactly close to the French Quarter, it is within walking distance. The trolley ($3.00 for 24 hours) does have a stop right around the corner on Loyola Ave, but the trolley is not the fastest in the world and both days we were touring we ended up walking back.

If our event returns to New Orleans, I’d definitely prefer to stay here vs. the Regency as I think it’s a better value and since the breakfast is included, I end up saving money.