After spending a few days on the Sunshine Coast we needed an overnight stay in Brisbane so that we didn’t have to leave Mooloolaba at a very early hour to be at the airport by 8 AM. I had an unused Marriott category 1-5 certificate from my credit card (either the Chase Marriott Visa or the Amex Marriott Bonvoy) so we booked the Marriott Brisbane. We knew that with three adults in a room with only two beds someone was going to be uncomfortable but since it was for only one night we weren’t concerned.

The hotel does not have a large footprint but is about 25 stories high. In front there’s only a place to drop off/pick up passengers so if you need to park, circle behind the building where the valet can help you.

We arrived in the early afternoon and our room was not quite ready though we had only a very short wait until we could check in.

The lobby, and much of the hotel, has an old school feel that I enjoyed. Marble floors and comfy leather chairs decorated the central portion of the lobby. The front desk was dark wood and located straight ahead from the front door.

On one side there was a carpeted area with high-backed chairs that had a bit of the feel of a library. 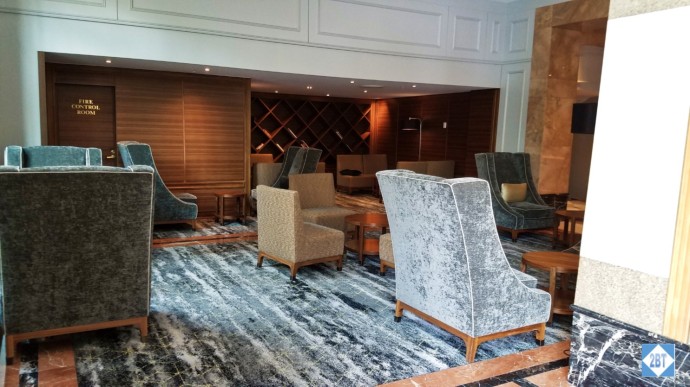 The other side was an extension of the bar and led into the restaurant. We used our free drink coupons for our nightcaps!

We were assigned rooms on the 16th floor.  We exited the elevator into a plush lobby.

Our room was just a short way down the hall.  The hallways are not very long in either direction. 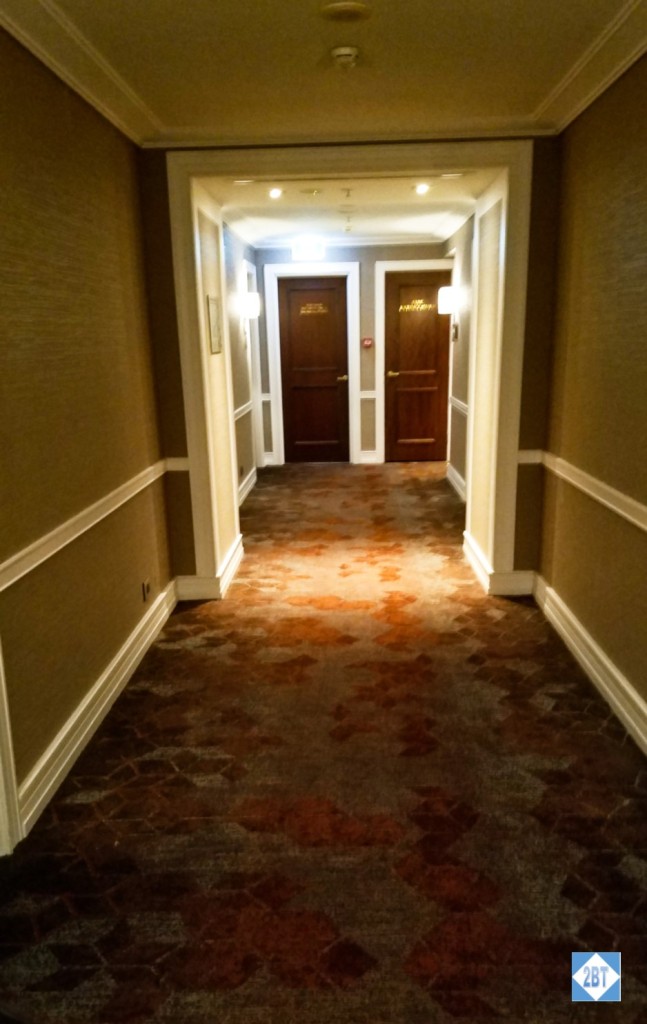 While the standard double room was fairly large, we immediately decided we’d be better off getting a second room rather than trying to cram all three of us in one room. Fortunately one of my traveling companions had recently received her free night certificate for her Chase Marriott Visa so we were able to get a single room for no additional charge. The nice desk clerk even gave us the room across the hall!

The layout was quite standard. Upon entering there was a short hallway with the bathroom on one side and the wardrobe; the beds were located beyond that.

Our double room had a corner chair.

Our friend’s king room had a full-length chaise by the window. 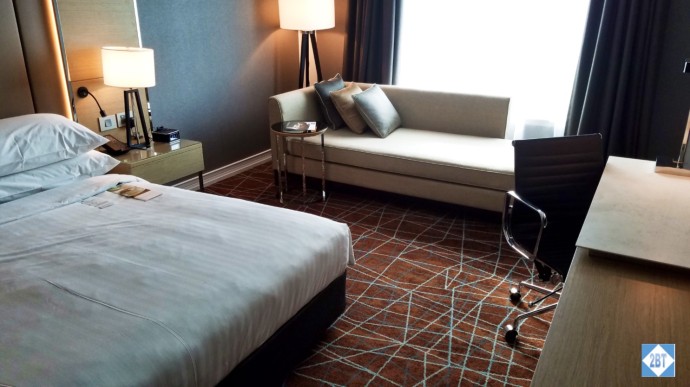 Both rooms had a desk with a chair as well as a cabinet that housed the mini-bar and a wall-mounted TV. I appreciated the easy-to-access electrical outlets over the desk and cabinet!

Waiting for us in the room was a welcome amenity of some fruit and a local sparkling wine. 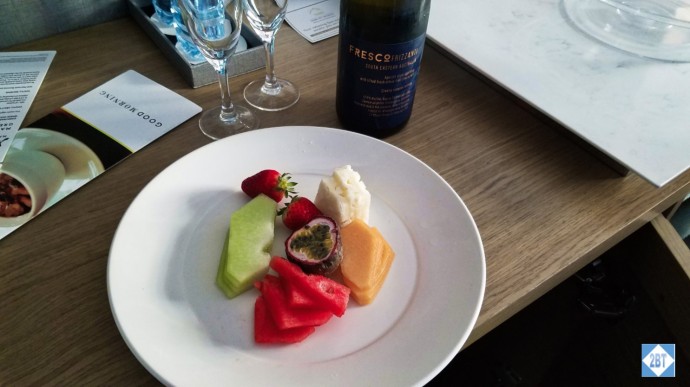 The large bathroom was a nice surprise. There was a separate soaking tub on one side. 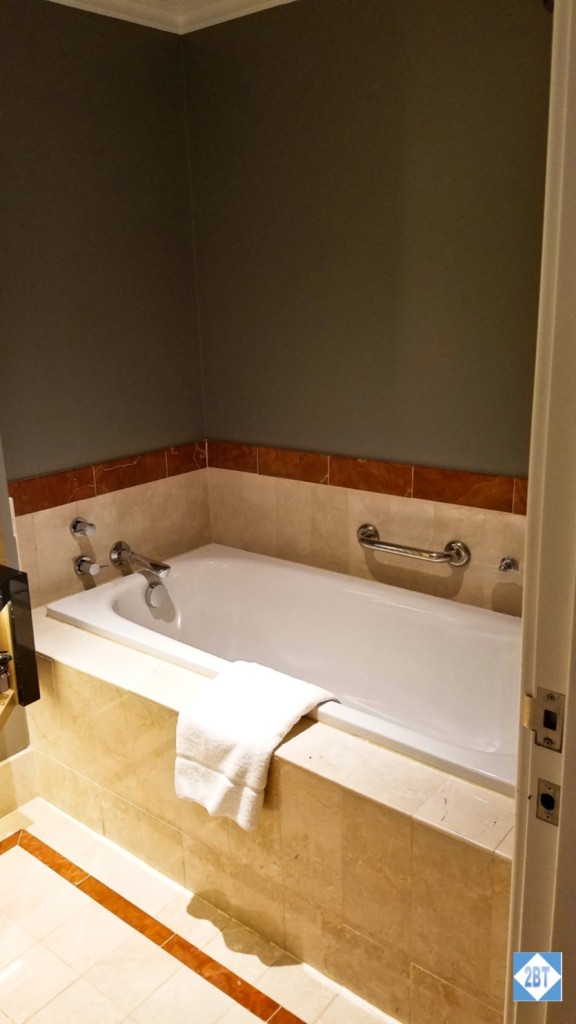 The toilet and shower were on the other side and the sink with a lighted mirror was in the middle. 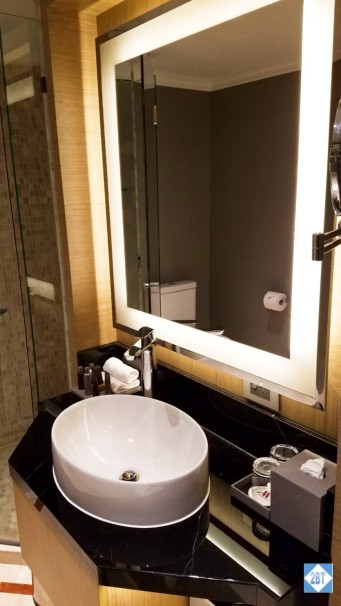 Toiletries were by Thann and were fine. 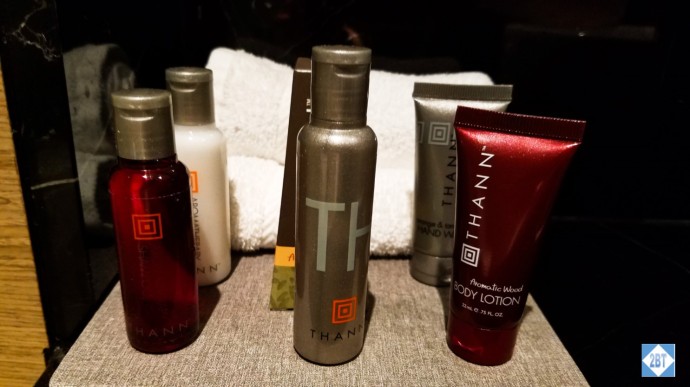 Across from the bathroom was the wardrobe, which was nice and large and included an ironing board.

The safe was in a separate closet along with some drawers and the iron.

Beside the wardrobe was a bench that doubled as a luggage rack. 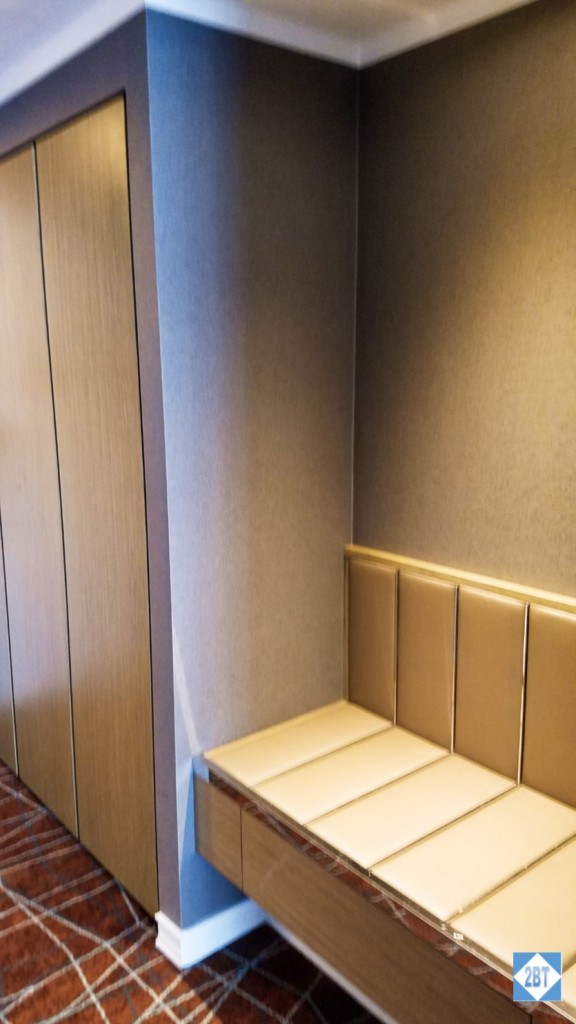 These areas were both surprising in a good way. While I knew I liked the lobby decor I hadn’t really focused on it as we waited for our room. After seeing the gym and pool areas the decorating scheme came together in my mind.

The pool is, I believe, on the second floor. I exited the elevator and turned left and these old-style doors were my first impression of the area.

Then I stepped on to the pool deck. The area reminds me of a swim club from, say, the 1920s or 1930s. Plenty of towels were available and the natural wood doors look like they’ve been in use for many years. 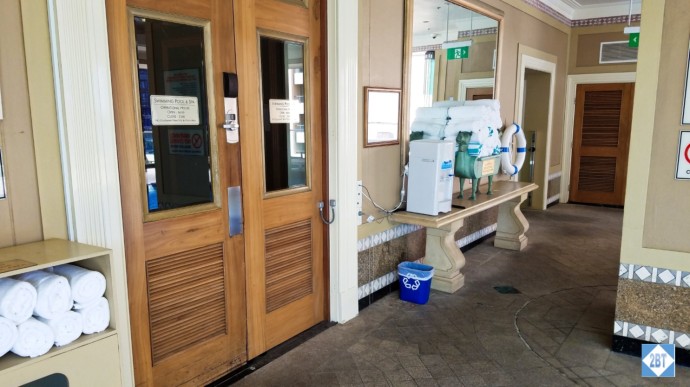 The pool itself is covered, even though the area is open-air, which I thought was a cool design. There is a small hot tub off to the right of the pool. Depending on the time of day there are certainly portions of the pool deck that get sunshine but in the heat of summer you can be cool in the shade and still enjoy the pool. 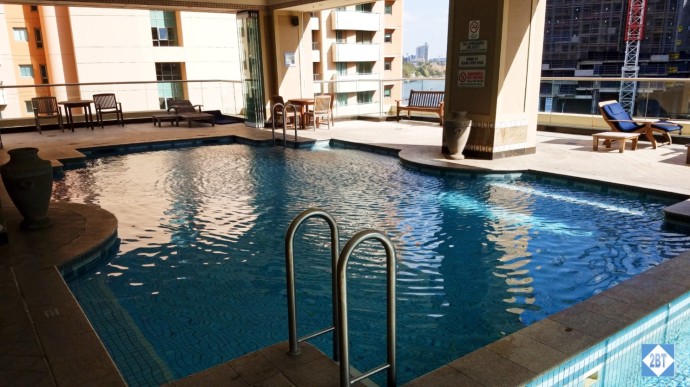 Back inside on the other side of the elevators was a set of double doors leading into the gym. It runs along the back of the hotel and has a wide balcony running the length of the room. The day I was there some sort of class on bike care/repair was being held out on the balcony and all the doors were were wide open. The temperature was quite pleasant and it would have been neat to be able to workout in such a situation.  Immediately upon entering was this large universal set. 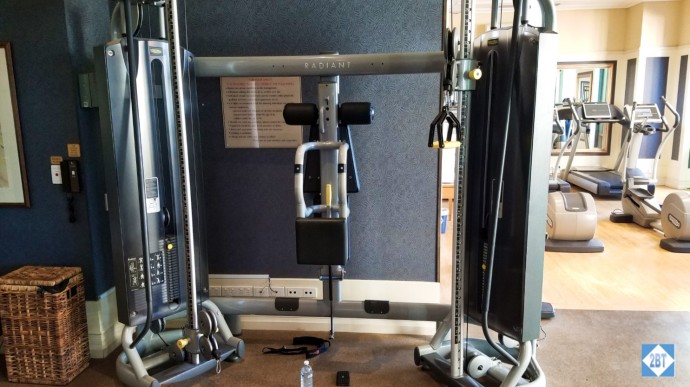 Across from that was the scale and some mats and fitness balls. 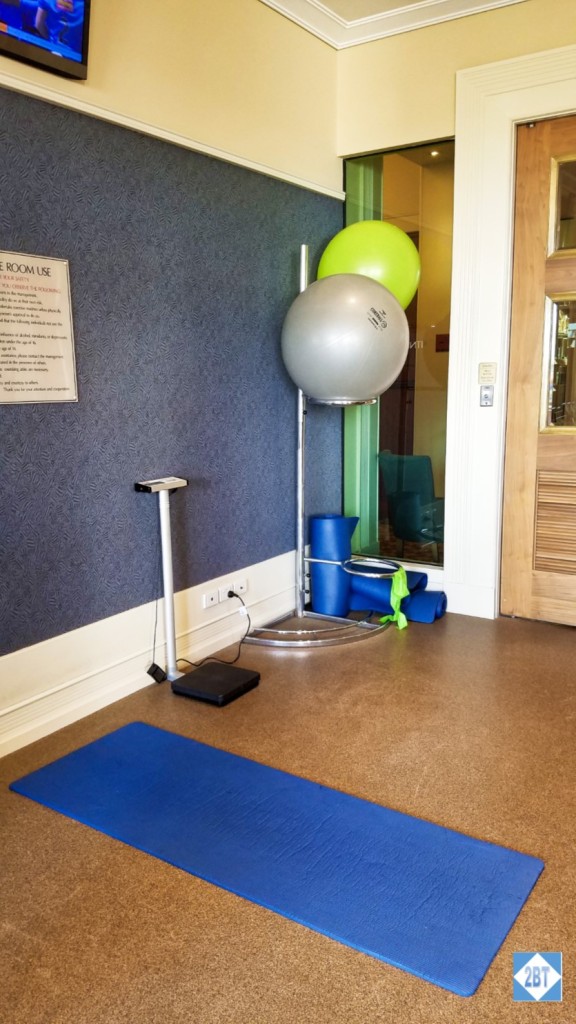 A weight rack and dumbbells were further along the right side.

The room then made an L and that’s where the cardio machines were found.

This hotel served our purpose quite well for our one-night stay. Rooms were clean and modern and after the bad wi-fi in our previous lodgings we were grateful we had no problems with it here. Our view seemed to be nothing too special when we arrived but we changed our mind when we returned for the evening!

Staff was quite helpful getting our free night certificate applied for the second room, which was appreciated. We had to walk several blocks to get to a selection of restaurants but it turned out we were closer than we originally thought to a large pedestrian area.

I’d like to return to Brisbane again and see more of the city. I don’t know that we’d stay here but that’s based on the room configurations and not due to the hotel or staff.