We departed from gate 56, which was a 3-minute walk from my seat in the ANA Suites lounge. It was just a brief escalator ride down one level and a very short walk to the gate.

Boarding was scheduled to begin at 10:45 AM so I left the lounge at 10:30 AM just to have a look around the gate area. We had a nice nose-on view of our aircraft but for some reason the photo I tried to take didn’t work.

About 10:40 AM an announcement was made indicating that boarding would begin soon. I loved how civilized it was, with separate boarding lanes for First (and Star Alliance Gold), Business Class (and Star Alliance Silver) and Economy. There were about 5-6 (really young looking!) agents in the area working the flight and monitors overhead let everyone know they needed not only their boarding passes, but also their passports open to the photo page.

Once pre-boarding of one wheelchair and one family with small children was complete, precisely at 10:45, those of us in First Class were allowed to board. I was a bit amused that after passing the gate agents, we turned a corner to reach the jet bridge and there were another half-dozen gate agents – and even some ramp/maintenance workers – and they all bowed to us as we walked through. Once on the jet bridge, two doors were being used for boarding – 1L for First and 2L for everyone else. It was one time I didn’t mind turning right after boarding!

I was promptly greeted and escorted to my seat, 2A. The Flight Attendant, Mami, was just lovely and informed me that since only 3 of the 8 First Class seats were occupied, she would make my bed across the aisle in 2D. Wow, two suites just for me! Neither 1A nor 1D were occupied so I had the whole left side of the plane to myself.

After stowing my carry-ons Mami suggested that I go ahead and change into my pajamas and led me to the lavatory. I was actually surprised at how small it was but then the other lav up front was even smaller. I really couldn’t complain, though. There was a small board to stand on while changing so my pants didn’t have to touch the floor, which was a fantastic idea. There were also extra amenities available like toothbrushes, mouthwash, etc. And the flower was a nice touch. I don’t recall ever using a lav where the water was turned on via motion sensor but I loved not having to touch the taps. When I exited the lav the FAs took my clothes and hung them up for me. 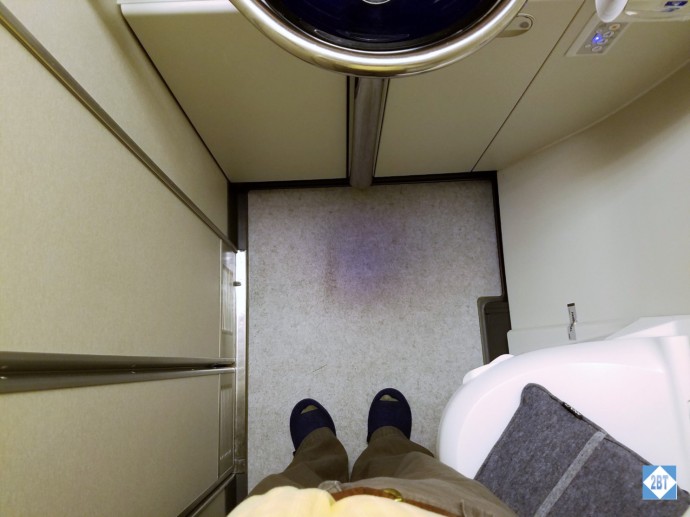 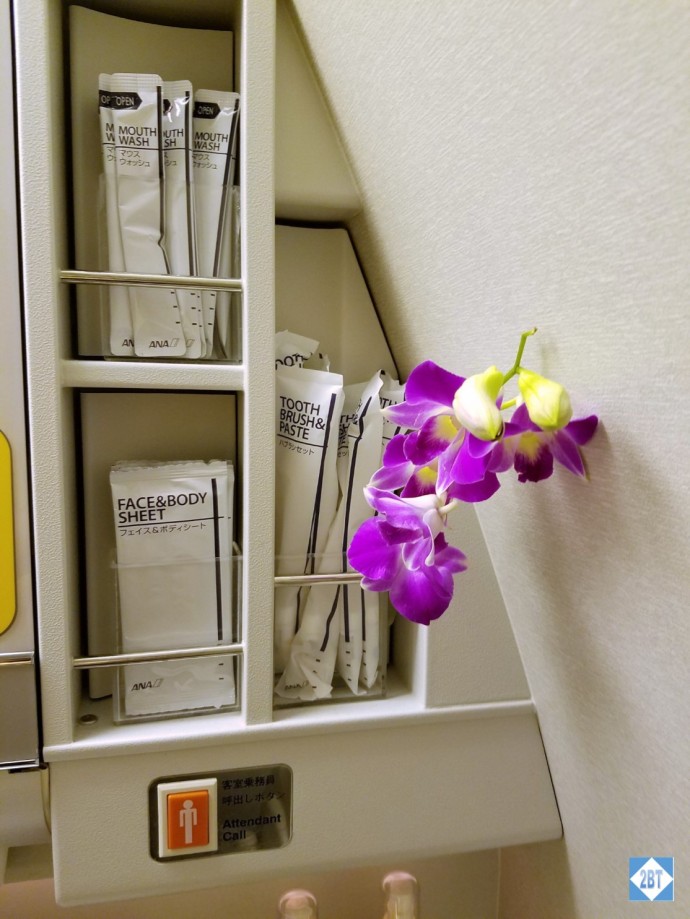 Extra Toiletries Available in the Lavatory

The PJs looked quite warm and I was a little worried I’d be hot, knowing the reputation that Asian airlines have for keeping cabins warm, and even though I did get a little warm from time to time, I wasn’t nearly as hot as I expected to be. I did not, however, put on the extra sweater that was provided. I can see myself using these PJs as loungewear at home so will put them to good use.

Back at my seat it was time to check out the amenity kit. I like the Samsonite case and it contained nice bottles of lotion by The Ginza as well as ear plugs. Mami also brought around a tray where I could get extras of any of the amenities and also the socks, which I accepted. 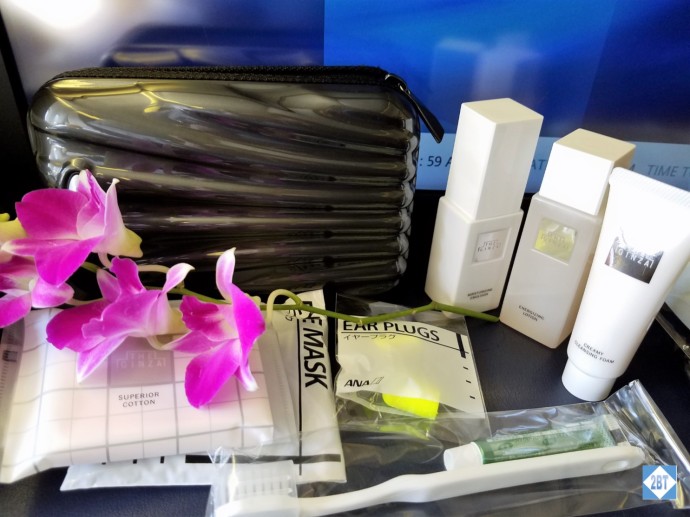 As for the suite itself, I really liked it. It’s not as spacious as the one on the Qantas A380 I flew to Sydney but the F cabin is much smaller (8 seats vs. 14) After “suffering” in economy seats on my intra-China flights and in a Delta Economy Comfort seat on the flight from Shanghai to Tokyo, it was nice to once again have a seat that had room to spare on each side.

The ottoman was the width of the suite, so no cramped foot hole when sleeping – yay! I also loved that underneath there was enough storage space to put both my backpack and my shoes. If there had been others on my aisle I’d have stowed my backpack there but since I had the aisle to myself I stowed it overhead. Of course it figures that I have all this space and didn’t even need it!

The 23-inch IFE screen was great though I was less than impressed with the movie selection. Ah well, it gave me more time to work on this report and other related tasks. 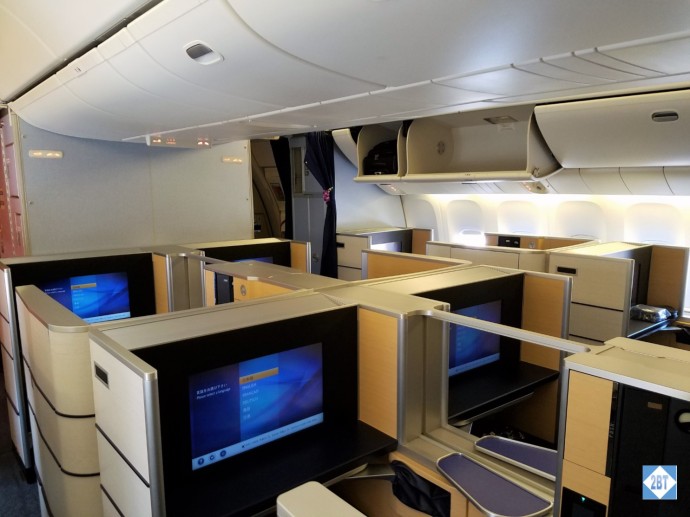 I loved the tray table, which sounds weird. When stowed, it was tucked under the shelf by the IFE screen but when released, it just glided toward the seat. This made it very easy to get in and out of the seat even when the tray was in use, There was also a smaller tray, perfect for drinks, on the window side.

On the left panel was a door for the headphones – Sony, not Bose – which were perfectly adequate and were actually great when trying to listen to the PA announcements as the FAs’ voices were soft and the headphones filtered out the cabin noise, 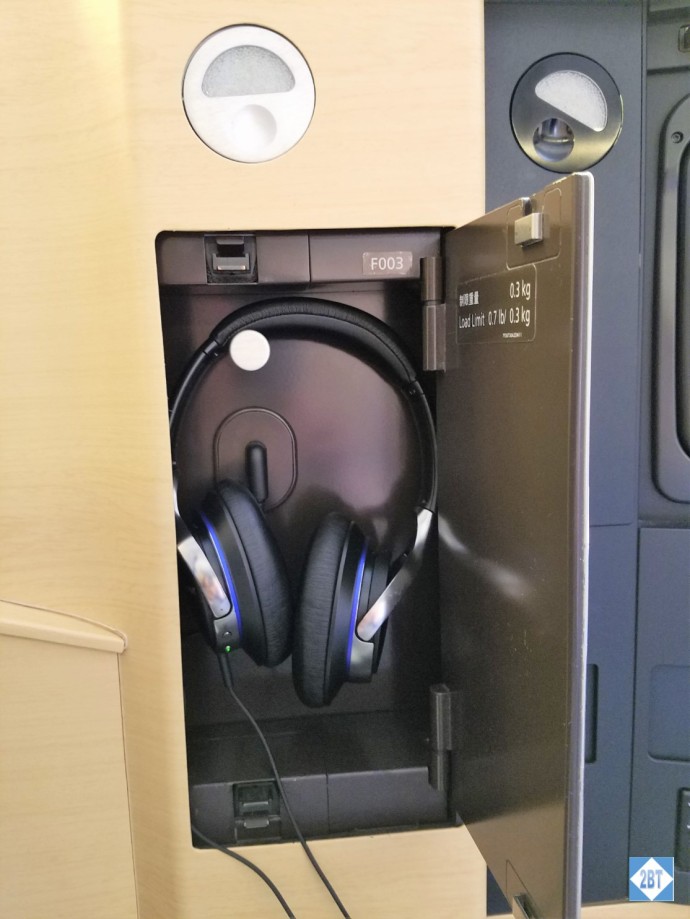 Also on the left were two lights that could be directed as needed, a door which hid the standard IFE controller, the electrical outlet which could handle 3-prong plugs (yay!), a small compartment perfect for storing a cell phone, switches for the overhead lights, a USB port and a video port and the seat controls. While the seat controls weren’t highly customizable, the pre-set chair positions were fine for me. 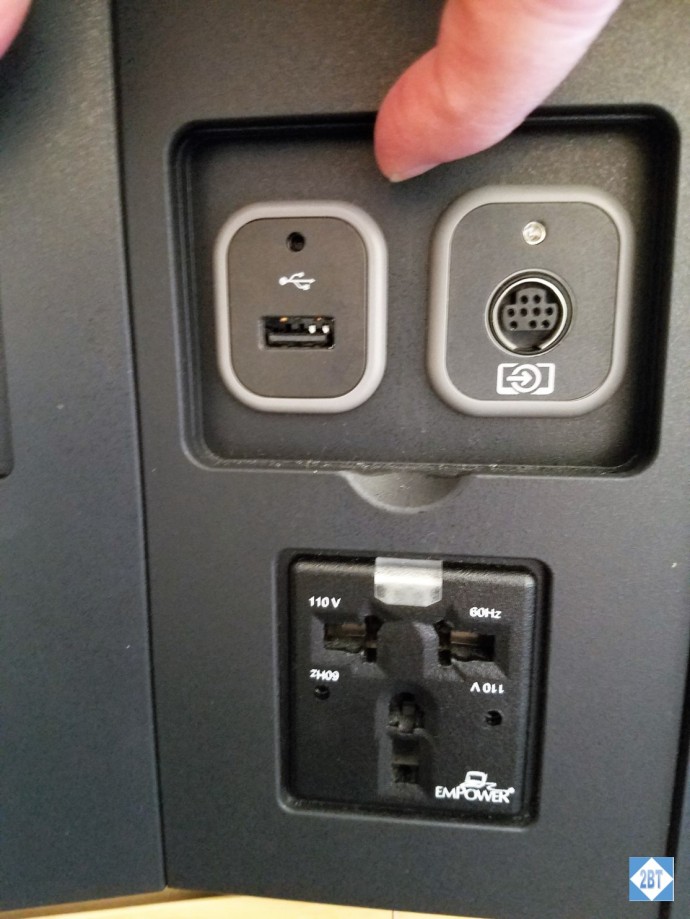 But my favorite compartment was on the right, on the aisle side of the suite. It was a little door with a pouch that let me have a safe place to store my glasses while sleeping. I always travel with a hard-shell glasses cases but usually have to leave it laying out on a shelf while sleeping, making it susceptible to falling off the shelf if we encounter turbulence. No such issues here!

I was offered a choice of orange juice or champagne as a pre-departure beverage and I went with the OJ.

We pushed back on time and after a taxi of about 13 minutes we were taking off. About 15 minutes after takeoff the seat belt sign was turned off and the FAs got to work on serving lunch. 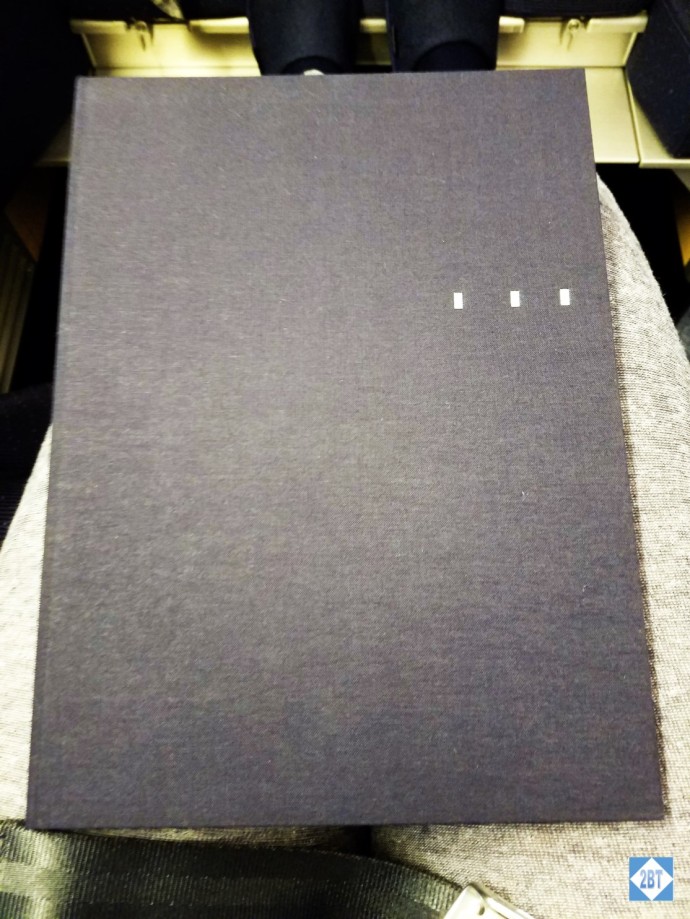 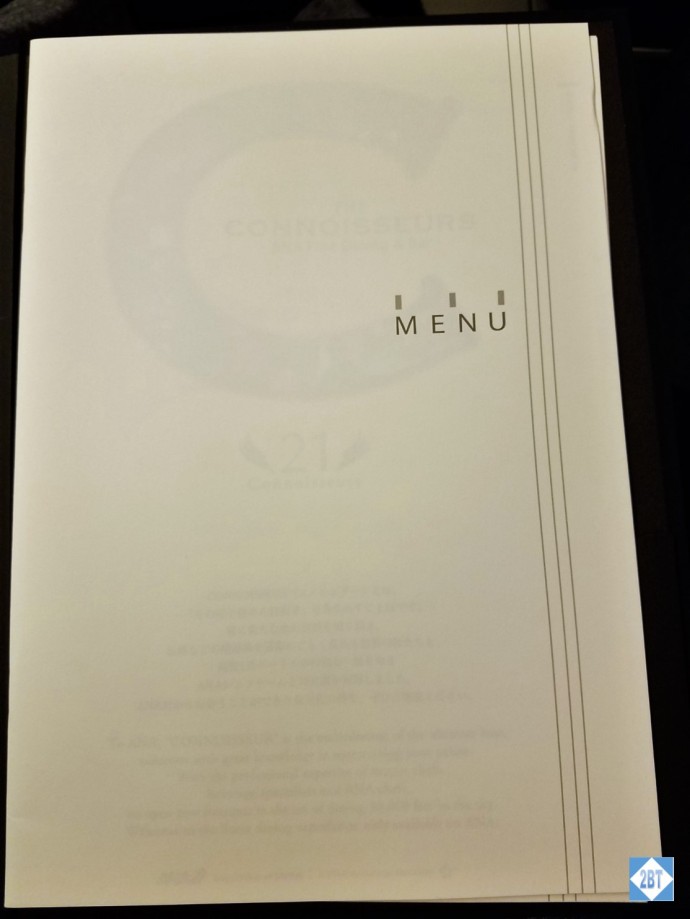 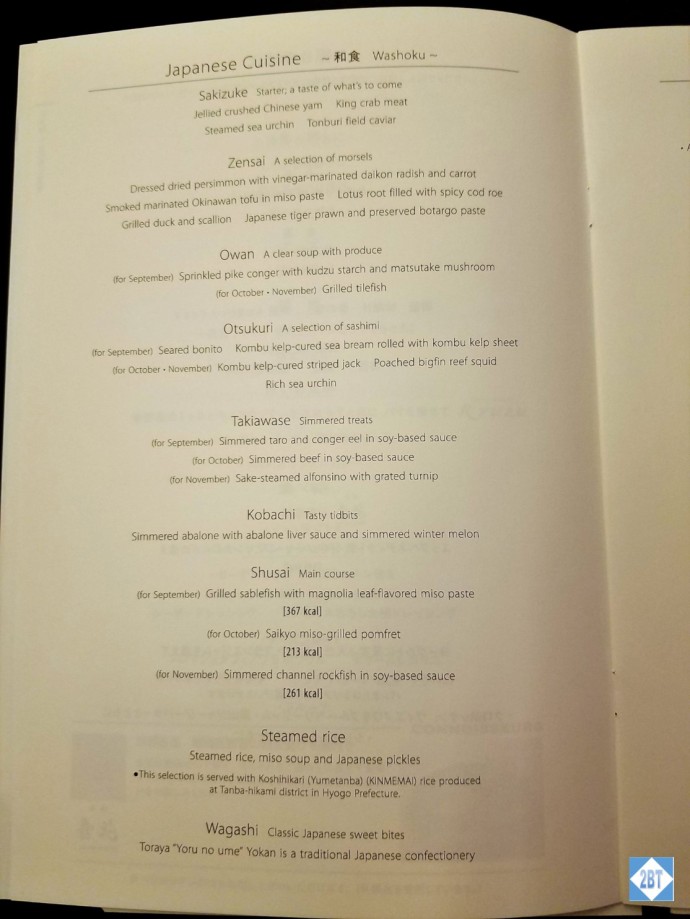 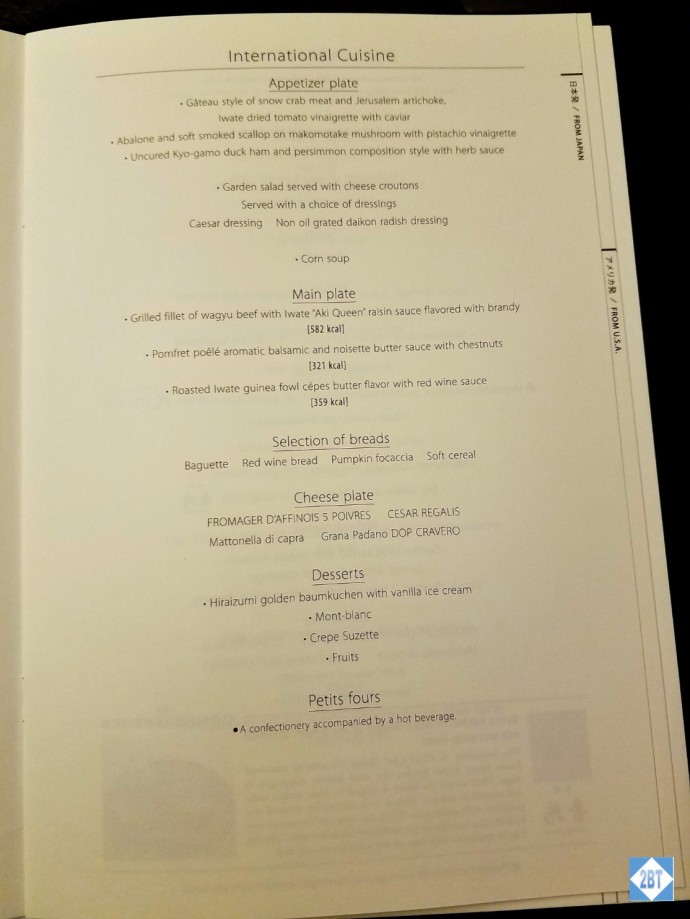 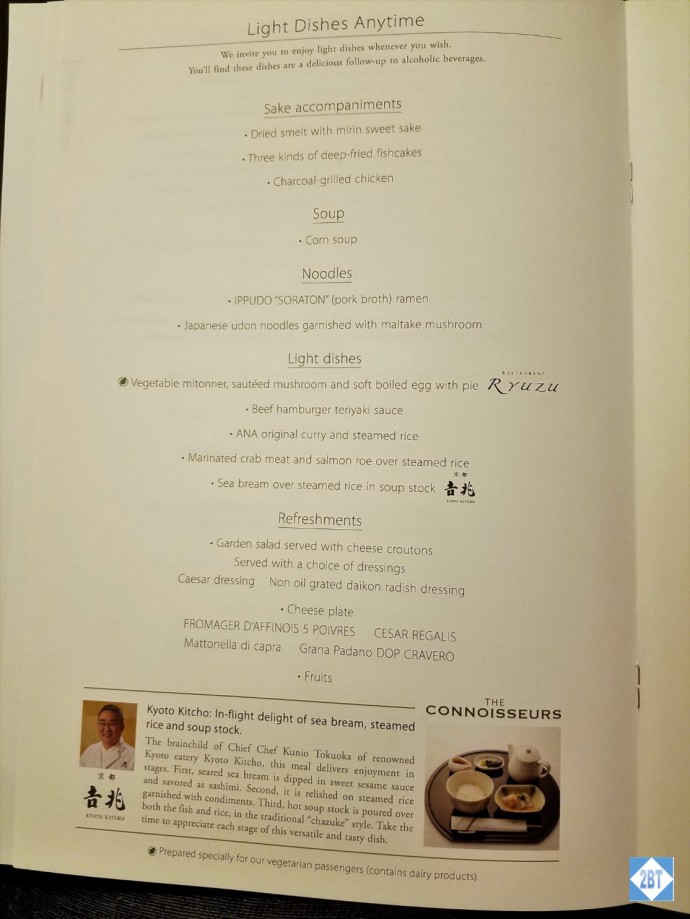 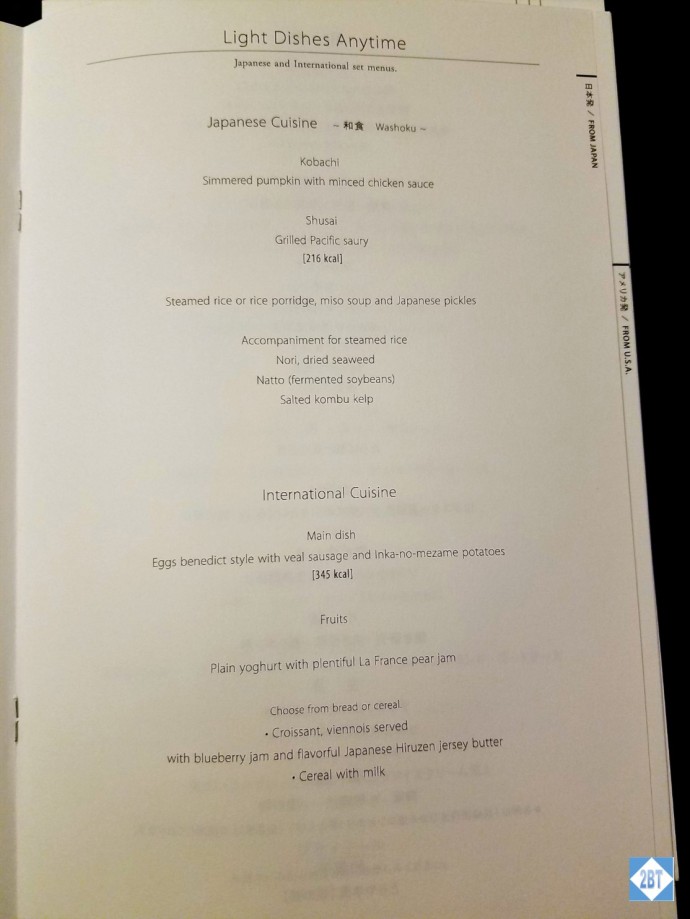 And, in case you’re interested, the menu for the USA-Japan route:

There was a whole separate section devoted to beverages.  There was the wine list: 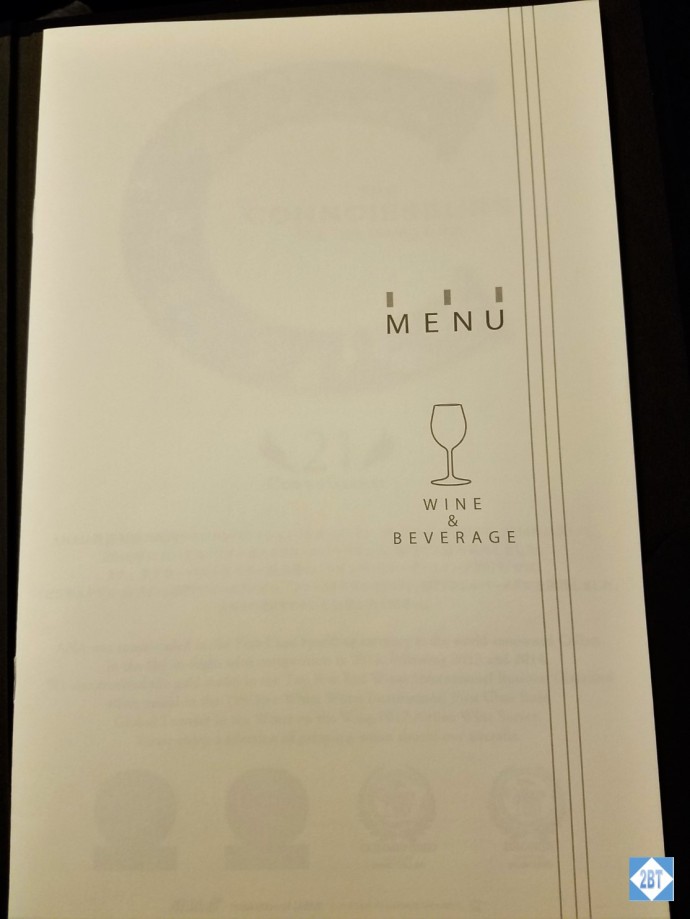 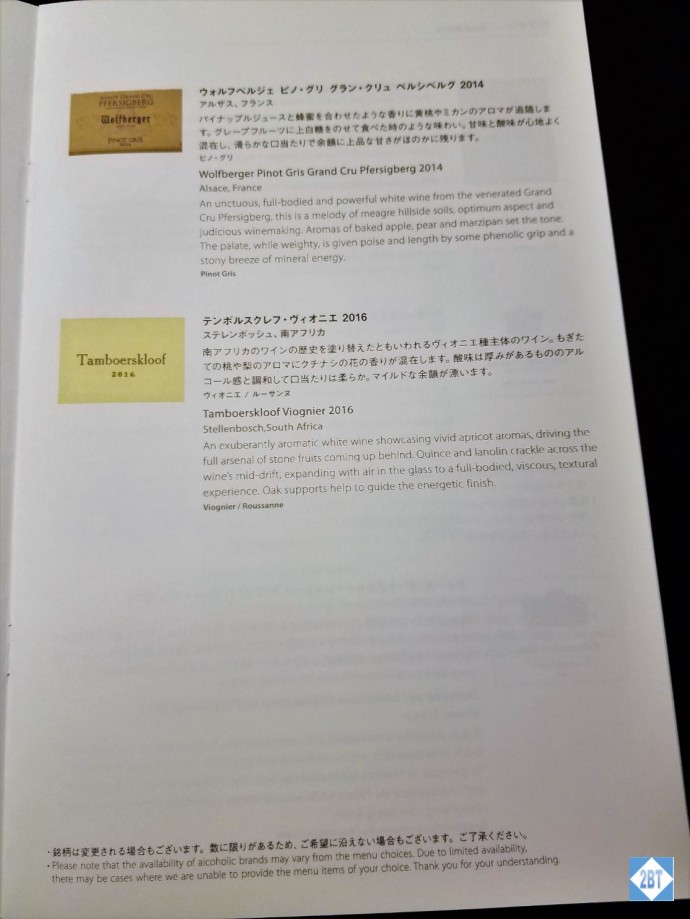 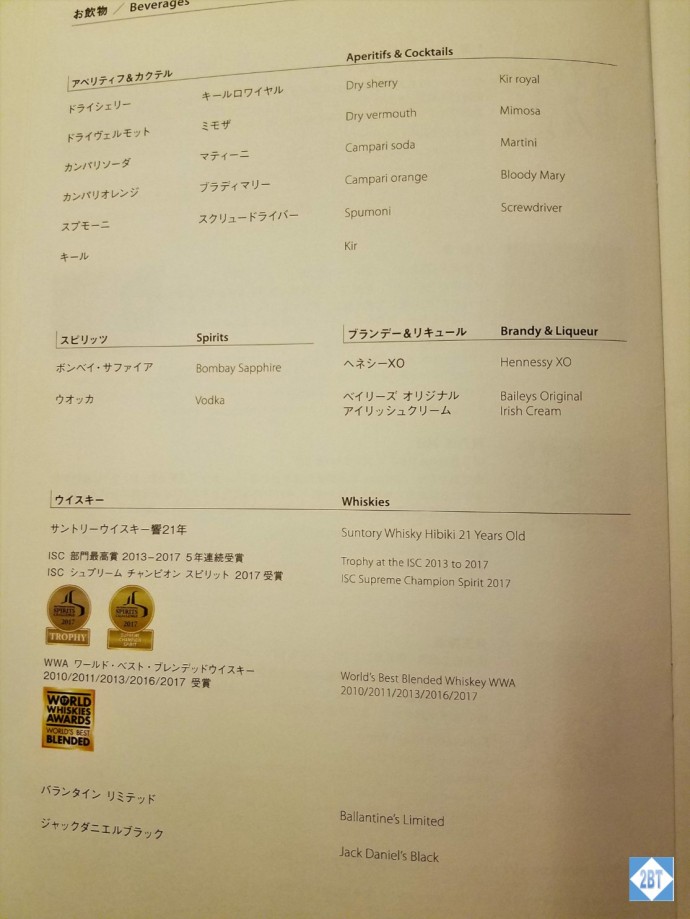 Salad with Caesar dressing on the side 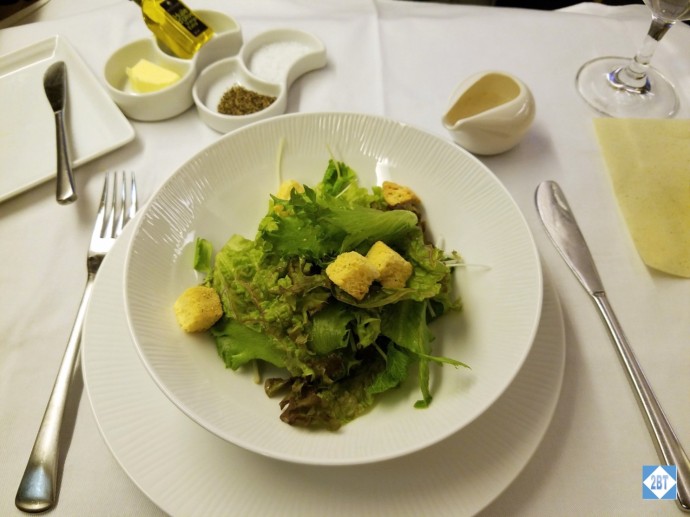 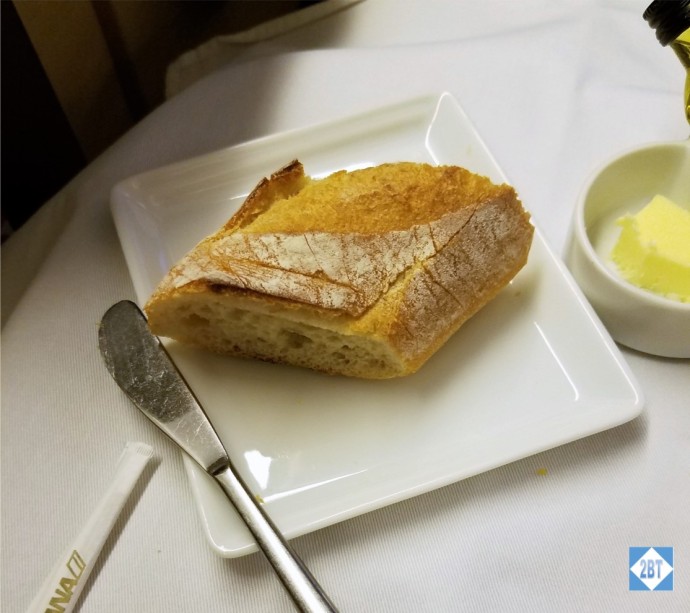 The Wagyu beef, which was quite good

For dessert the Hiraizumi Golden Baumkuchen with vanilla ice cream

Topped off with Petits Fours and a cup of tea 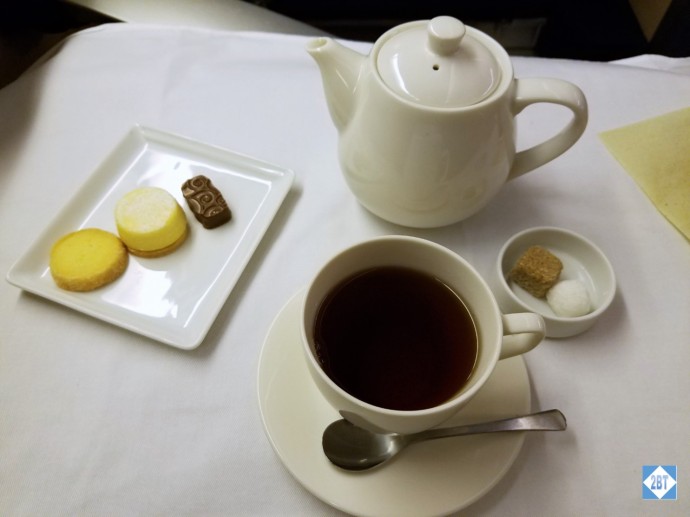 After lunchI was ready for a nap and Mami had made up the suite across the aisle as my bed. 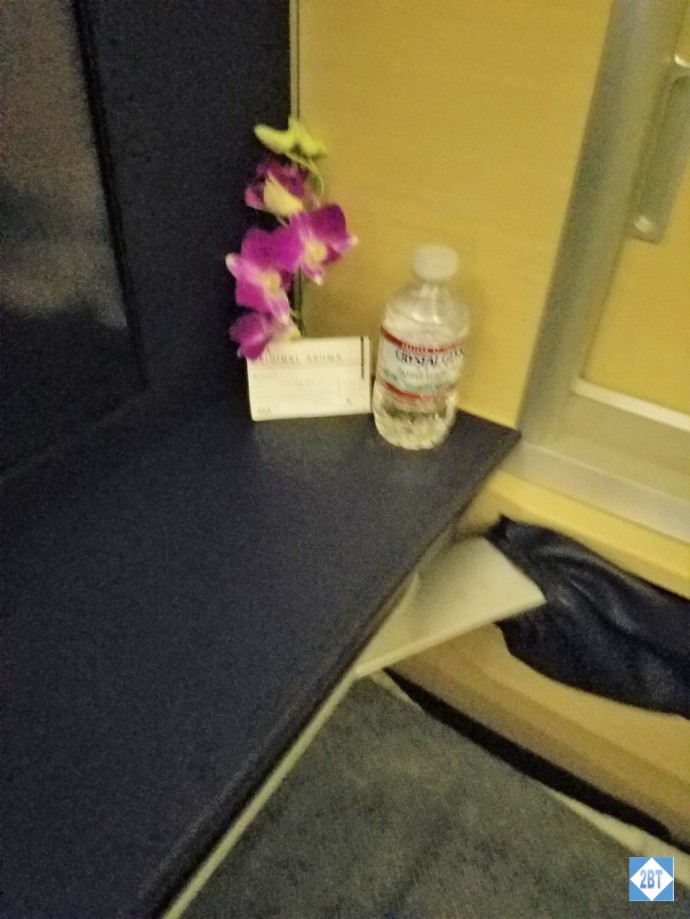 ANA First Class Suite with Extra Water and a Flower

The signature fresh flower was in the corner along with another bottle of water.

I slept for a couple of hours but as it was daylight I really just needed a nap. I then returned to my window suite and worked for most of the trip back. While the Light Dishes Anytime menu was available I wasn’t all that hungry as the lunch had been quite filling.

The entertainment system was pretty disappointing so when I grew tired of working on trip photos I played some games on my tablet and dozed in my seat.

We arrived in Houston on time and with Global Entry I had plenty of time to make my connection. Even though I had arrived on a first class ticket, United doesn’t make their own lounge available on award tickets. I was able to go back to the international terminal and use the KLM lounge with my Priority Pass card. But it was pretty crowded and they had the TV turned up on some game show which I just found rude. Still, it was more comfortable than the terminal so I just tried to ignore the noise.

I eventually made my way back to the domestic terminal and found a spot outside the gate area for the regional jet connections. I do wish United would make connecting seats in premium cabins available though even those might still be on regional jets. It’s just always such a letdown to arrive in the US in a premium cabin and be stuck in the back for the last leg.

But I arrived home safely, with my luggage, which was my main concern. Unfortunately 3.5 weeks of travel caught up with me and I had to fight a sinus infection for the next week or so. It also took me about a week to get my sleep on a normal schedule again.

21,800 miles of flying, another 792 miles of cruising and I’d finally made it home. Viking does an amazing job with their tours though I’ll definitely think hard about paying for another extension. I was amazed at how well I could get around in most major Chinese cities without speaking a word of Mandarin. I do hope to make it back to Asia some day and will be able to find plenty of things I missed this time around.

Thanks for coming on this journey with me. The big trip this fall will back to Europe.