I had a very early start to the day for my return trip. My flight from Munich to Chicago departed at 11:25 AM so I wanted to be sure I had plenty of time to connect – and even to catch a backup flight should my original flight get canceled. So I was booked on a 6:20 AM flight from the Cologne/Bonn airport to Munich. I booked a ride with Suntransfers and my only complaint was that they were non-negotiable as to pickup time and that was at 3:55 AM. At that time of day, with no traffic and it’s a short drive anyway, I was at the airport around 4:30 AM and the Lufthansa ticket counter didn’t even open until 5 AM so I had to stand there for half an hour with my bags. Ah well, certainly better than being late.

CGN airport is quite small. In fact, on their website, the motto is: so simple. There are two terminals. Terminal 1 handles Lufthansa, Germanwings, Austrian and Star Alliance partners and Terminal 2 handles all other airlines. Each Terminal has a lounge. In T2 it’s a generic business lounge for all the airlines while in T1 it’s a Lufthansa-branded lounge.

As the airport is small, so is the lounge. However with Lufthansa being the dominant carrier I can see that it might get crowded with elite travelers gaining access even if they’re on an economy ticket. It opens at 5:30 AM so I had to wait a bit for entry.

The lounge is circular in shape and one side of the room has the comfortable lounging chairs while the other side has tables and chairs for dining.

END_OF_DOCUMENT_TOKEN_TO_BE_REPLACED

My return flight left Budapest at 6:30 AM.  I had booked this leg of the trip using my Miles & More points, hoping that shortly before I left Budapest, Lufthansa would open up space and I’d be able to fly first class via Frankfurt.  But the space never opened up so I had to “settle” for business class.  Poor me.

My friend and I shared a taxi to the airport even though she was returning on Turkish Airlines and her flight was nearly three hours later.  Sure enough, when we arrived she couldn’t even check her bags as no one was at the Turkish counter that early.  So we said our goodbyes and I headed through security to the lounge.

The lounge I was directed to was very small and nearly full.  It did have free wi-fi but didn’t even have its own restrooms.  It was a contract lounge, not a Lufthansa lounge and while it was better than sitting the terminal and had some free beverages, I was completely under-whelmed.

Eventually though we boarded our flight for the relatively short flight to Frankfurt, which was very uneventful.  Like many intra-Europe flights, business class was simply economy with blocked middle seats and nice service.  We did get an edible, if unremarkable breakfast.  Before long we were in Frankfurt where I was able to enjoy the lounge for  a couple of hours.

When I got to the gate, I admit I was surprised.  Where was the German efficiency I so appreciate?  With Frankfurt being a Lufthansa hub, there are naturally a lot of people with elite status who are not flying in First or Business class.  So they hover around, waiting for priority boarding to be called instead of queuing up. I don’t think I’ve ever seen priority boarding be so chaotic, though my experience is not that widespread.  At any rate, eventually I boarded through door 1L and found my seat.

As I was traveling solo for this leg I selected a seat in the middle section so I wouldn’t have to worry about climbing over anyone or being climbed over.  Waiting for me at my seat was a blanket and this pillow.  I loved the color scheme. 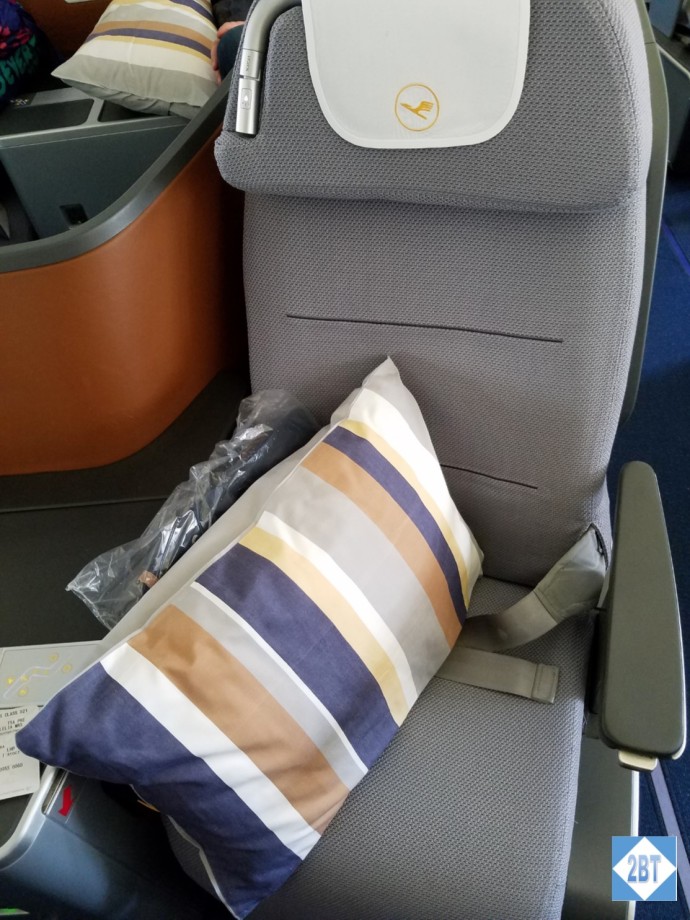 END_OF_DOCUMENT_TOKEN_TO_BE_REPLACED

I have a group of friends that like to travel together and one of them knew of another small group that was doing a Danube River cruise with Viking River Cruises.  Having cruised the Rhine with Viking a couple of years ago, we were excited to join that group for another European float.

Naturally we used airline miles to cover our flights in business class.  We both used United miles to fly to Prague with a long layover in Brussels.  My friend also used UA miles for a return flight from Budapest on Turkish Airlines via Istanbul.  I used my Lufthansa Miles & More miles via Frankfurt, hoping to be able to upgrade to First Class as the time for our flight grew closer, but it wasn’t to be.  No first class award seat ever opened up on the FRA-ORD leg on my flight date.  Note to self: in the future, don’t fly on a Monday.  Loads of business travelers!  I saw award seats on both Sunday and Tuesday around my date but by then the rest of our plans had been set so I had to “settle” for business class.

Our outbound flight connected in Brussels and I have a Twitter friend who lives in Belgium.  Though we’d never met in person, she was kind enough to drive down to Brussels and meet us for lunch and take us on a walk around the area near the train station.  I love the way the world gets smaller with social media!

END_OF_DOCUMENT_TOKEN_TO_BE_REPLACED

#TravelTuesday photo: a baby bison with its mom at @CusterStatePark in #SouthDakota 🇺🇸